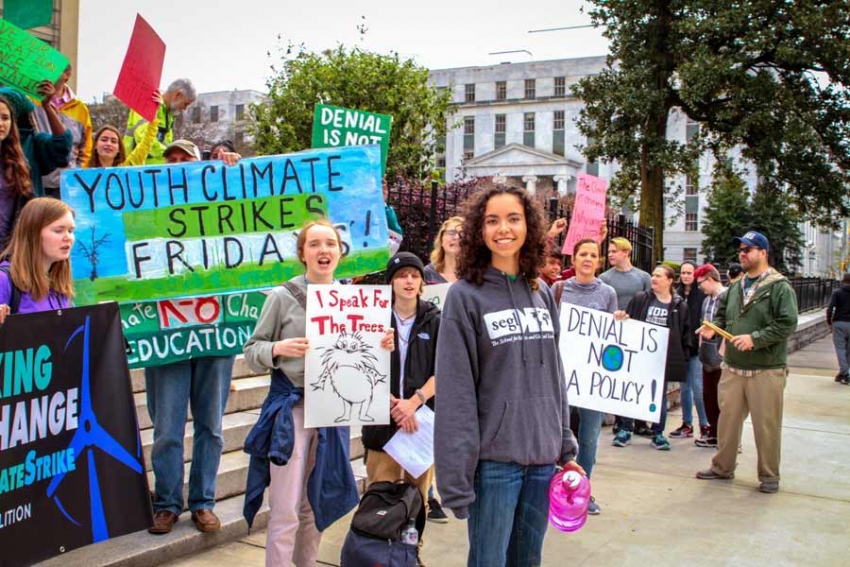 Kendall Greene, an organizer of the Youth Climate Strike in Atlanta, stands in front of the Georgia State Capitol with fellow protesters on March 15. (Jena P. Jones/F2 Photos)

Across the World, Youth Are Striking for Their Right to a Livable Planet

The March 15 Youth Climate Strike was organized by and for the people who have arguably the biggest stake in this issue: Generation Z.

ATLANTA—Gathered in the courtyard of a historic stone Presbyterian church in downtown Atlanta on a Friday afternoon, students ranging in age from 5 to 21 are fully aware they’re missing class to be here. But facing them is a question that is arguably more pressing than anything they’d find on a math test: At their feet is a banner that reads, “What will climate change steal from you?”

Picking up markers and paintbrushes scattered around the banner, the students add their responses: “My future,” one person writes. “A home,” writes another. “Say goodbye to your luxury cruises,” another scrawls. Then they hurry back across the street to join more than 120 protesters on the steps of the state Capitol building, where chanting, drumming and cheering erupt as the Youth Climate Strike kicks off.

The March 15 Youth Climate Strike was organized by and for the people who have arguably the biggest stake in this issue: Generation Z (those born in 1995 or after). The strike is part of an international movement of students, parents, workers and others organizing rallies to pressure world leaders to address the climate crisis. Spearheaded by Swedish teenager Greta Thunberg, who organized a three-week-long protest outside the Swedish parliament building in 2018, regular Friday protests now happen in communities around the globe, connected online by hashtags like #KlimatStrejk, #FridaysForFuture and #ClimateStrike.

The U.S.-based Youth Climate Strike movement seeks to declare climate change a national emergency, move the country to 100 percent renewable energy by 2030, create compulsory education about climate change for grade-school children and pass the Green New Deal, among other demands.

Kendall Greene, 17, an organizer of the Atlanta strike, makes trips back and forth from the community art project to the chanting crowd, encouraging protesters to take short breaks to add their thoughts to the banner.

“I am deeply moved by the passionate kids in Atlanta who care about our planet, who are afraid for their futures, of the impacts the climate crisis might have on them,” Greene says. “I believe in the power of young people.”

In May 2017, the Atlanta City Council unanimously passed a resolution committing to transitioning to 100 percent clean energy by 2035—but Greene wants to see the city move up its goal to 2030, which would put the city in line with recent recommendations from the Intergovernmental Panel on Climate Change (IPCC) to limit global warming to 1.5 degrees Celsius (2.7 degrees Fahrenheit) by cutting greenhouse gas emissions in half by that year.

Greene also wants the state of Georgia to adopt a similar commitment, but she recognizes there are challenges.

“I think about how most of our [state] representatives are climate change deniers, which is so upsetting when you look at all these students that care deeply about the planet,” Greene says, gesturing to the animated crowd behind her.

The students recognize the urgency of the situation. “We have 11 years, according to the United Nations IPCC report, to get emissions under control,” Margaret Iva Ashton, 21, tells the crowd. “If we do not do that, this is not just a climate crisis, this is a human rights crisis.”

Cars pass by, honking in support, as several of the organizers discuss the significant influence of corporate lobbyists on policymaking.

“When you take money from big oil, you are funding the genocide that’s currently happening in Yemen and you are killing the planet, and it’s not worth it,” says Jo Pennington, 17.

“When we don’t let young people engage in these discussions, they’re not ready to actually participate in democracy when they get older,” Pennington adds.

For those who live out in the wealthier suburbs of Georgia, Pennington says, “There’s no inclusivity there. … They don’t see the actual realities of income inequality and how climate change and over-policing are hurting our communities.”

Audrey Norris, 18, the artist behind the banner, says the project is a means toward that end.

Looking ahead, Greene notes that maintaining momentum is key.

“Check out the Green New Deal, call your representatives, tell them to support it—even though that’s really difficult in Georgia,” she says. Nevertheless, Greene remains hopeful.

Ari Bee is an Atlanta-based freelancer who can be found on Twitter @capitol_REB.