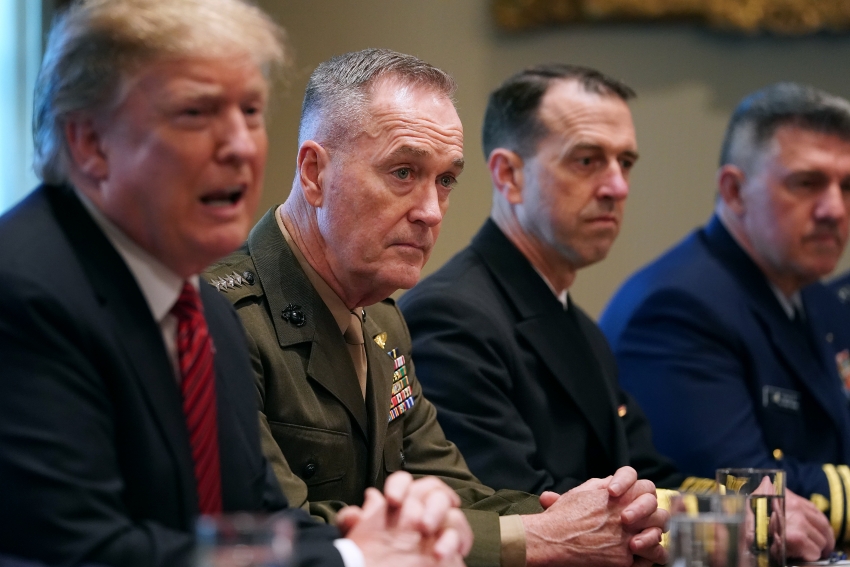 U.S. President Donald Trump (L) talks to reporters during a briefing with military leaders, including (2ndL-R) Chairman of the Joint Chiefs Gen. Joseph Dunford, Chief of Naval Operations Admiral John Richardson, General Joseph Lengyel and others in the Cabinet Room at the White House April 03, 2019 in Washington, DC. (Photo by Chip Somodevilla/Getty Images)

The Alarming Rise of Civilian Deaths in the War On Terror

New reports show an escalation in civilian casualties from U.S. operations in Syria, Afghanistan and Somalia — and a pattern of U.S. denial about the scale of the problem.

There is no military solution to any of these conflicts. As long as failing military actions are still taken, however, civilians will continue to die.

“There is no military solution” is an often-heard saying since the “global war on terror” began almost 18 years ago.

We need political solutions to the military conflicts we’ve embroiled ourselves in over the last two decades, most policymakers agree. But in the meantime, the last three administrations have sent in the military to pave the way for a political solution — and have kept them there, allegedly to protect civilians from the Taliban in Afghanistan, ISIS in Syria and al-Shabab in Somalia, among other militant groups.

Yet all too often, these civilians become casualties of the very military forces Washington supposedly deployed to protect them.

A series of new reports document an alarming escalation of civilian casualties caused by U.S. operations in Syria, Afghanistan and Somalia — and with it, a pattern of U.S. denial about the scale of the problem. The result is a global war on terror that persists in killing and injuring civilians — including children — in ever rising numbers.

ISIS claimed the city of Raqqa, in north-central Syria, as the capital of its so-called “caliphate” in January 2014. The Obama administration launched a bombing campaign in Syria that fall, followed by ground troops in 2015.

The group’s control of the city was marked by horrible conditions for the civilian population — including brutal punishments for infractions of ISIS's religious rules, extra-judicial killings and sexual slavery. The fighting across Syria involved both ISIS and the various powers operating in the country: Iran, Turkey, Saudi Arabia, the UAE, Israel, the U.S. and Russia, not to mention the Syrian government and a variety of opposition forces. As a result of this global onslaught, Raqqa and its beleaguered inhabitants faced constant death and destruction for years.

But it was the U.S.-led bombing campaigns in Raqqa for which civilians and their city paid the highest price. The April 2019 Amnesty International report title sums it up: “Rhetoric versus Reality: How the ‘most precise air campaign in history’ left Raqqa the most destroyed city in modern times.”

The assault was relentless. “One U.S. military official boasted about firing 30,000 artillery rounds during the campaign — the equivalent of a strike every six minutes, for four months straight — surpassing the amount of artillery used in any conflict since the Viet Nam war,” the report notes. It added that “unguided artillery” is “notoriously imprecise.”

Amnesty documented 1,600 civilians killed by U.S.-led airstrikes on the city, limiting their count mostly to those the organization and its partners were able to reasonably verify on the ground. “Raqqa’s soaring civilian death toll is unsurprising,” the report concludes, “given the Coalition’s relentless barrage of munitions that were inaccurate to the point of being indiscriminate when used near civilians.”

In one incident, a five-story residential building where four families were taking shelter was completely leveled by an air strike. “Almost all of them — at least 32 civilians, including 20 children — were killed,” the report said. And worse: “A week later, a further 27 civilians —including many relatives of those killed in the earlier strike — were also killed when an air strike destroyed a nearby building.”

Pentagon officials who routinely bragged about their “precise” bombing of the city acknowledge the killing of only 159 civilians in Raqqa — about 10 percent of those Amnesty confirmed. So far, they’ve dismissed the rest as “non-credible,” while refusing to launch serious investigations of the real toll.

There’s no doubt that more serious investigations like Amnesty’s in Raqqa would document far more casualties in all the theaters of the global war on terror.

The U.S. war in Afghanistan is in its 18th year, and more civilians are dying every year.

In the first months of 2019, the United Nations determined that, for the first time since the UN Assistance Mission began documenting deaths, more civilians had been killed by U.S. and U.S.-backed forces than by the Taliban or ISIS. Nearly half of those deaths caused by the U.S. and its allies occurred as a result of U.S. airstrikes, which killed a significant number of women and children.

A U.S. military spokesman in Afghanistan intoned the well-known trope that U.S. forces “hold ourselves to the highest standards of accuracy and accountability,” before repeating that familiar refrain about a political solution: “The best way to end the suffering of noncombatants is to end the fighting through an agreed-upon reduction in violence on all sides.”

According to the Special Inspector General for Afghanistan Reconstruction, the U.S.-backed government in Kabul now controls only about 54 percent of the country's districts. Eighteen years of war and occupation haven’t eliminated the Taliban — quite the contrary. The U.S., Russia and various Afghan civil society groups are all negotiating with the Taliban, while the U.S.-backed Afghan government fades under a morass of corruption and incompetence.

The war in Afghanistan has been a failure not only in political but in human terms. As of at least 2017, Afghanistan's infant mortality rate — the proportion of babies dying before their first birthday — was exactly where it was when the Taliban was in control, before the U.S. invasion: Number one in the world.

The largely invisible U.S. war on Somalia has been underway sporadically since the early 1990s. Since the September 11, 2001 attacks, U.S. operations there have included Special Forces and other ground troops hunting for al-Qaeda, al-Shabab and other militant organizations. Beginning under the Obama administration, the main focus has been an air war carried out largely by drones.

In 2017, President Trump loosened the already not-very-tight regulations governing drone attacks, reducing Obama-era rules that were supposed to protect civilians. The result was a significant escalation in drone strikes in the country: The number of attacks in 2017 rose to 34, and then rose again in 2018 to 47 — and this year's total looks on pace to surpass even that.

The U.S. Africa Command rather remarkably claims it has killed only two civilians in the dozens of airstrikes launched in the last two years. But Amnesty International's Brian Castner calls that a ”denial of reality.” In the New York Times, Castner writes that “in five of those airstrikes alone, Amnesty International can identify by name 14 civilians killed. By denying these casualties, our government is essentially trying to gaslight an entire country.”

The escalation of U.S. military intervention across Africa has remained largely under the public radar. But it continues — and just like in the more well-known U.S. war theaters, it results in the same consistent failure of military operations to end security threats.

According to the extraordinary journalist Nick Turse, “Over these last years, the number of personnel, missions, dollars spent, and special ops training efforts as well as drone bases and other outposts on the continent have all multiplied… Almost no one, however — neither those senators nor the media — has raised pointed questions, no less demanded frank answers, about why [security] crises on the continent have so perfectly mirrored American military expansion.”

Perhaps that’s because — as in Afghanistan and Syria — these operations do nothing about the extreme poverty, climate change, corruption and wars (often launched by the West) that together provide the source and the impetus for extremist actions.

Behind the numbers is an almost unbearable human toll.

“I saw my son die, burnt in the rubble in front of me,” said one bereaved woman from Raqqa. “I’ve lost everyone who was dear to me. My four children, my husband, my mother, my sister, my whole family. Wasn’t the goal to free the civilians? They were supposed to save us, to save our children.”

Yet denial of the scale — and in many cases, the very existence — of civilian casualties has been a feature of Washington's global war on terror since its origins. In 2002, Gen. Tommy Franks, then-U.S. commander Central Command, asserted that “we don't do body counts.”

The toll from bombs, drone strikes and firefights is only the tip of the iceberg. Not included are the hundreds of thousands killed in war zones around the world by U.S.-imposed economic sanctions, by hunger stemming from food system disruption, and by disease resulting from the bombing of water treatment facilities, hospitals and clinics.

The hoary old statement is still true: There is no military solution to any of these conflicts. As long as failing military actions are still taken, however, civilians will continue to die. And they are being killed by the very soldiers and pilots, bombers, National Security Councils, congressional war-funders, parliaments, prime ministers and presidents who claim to be liberating them.