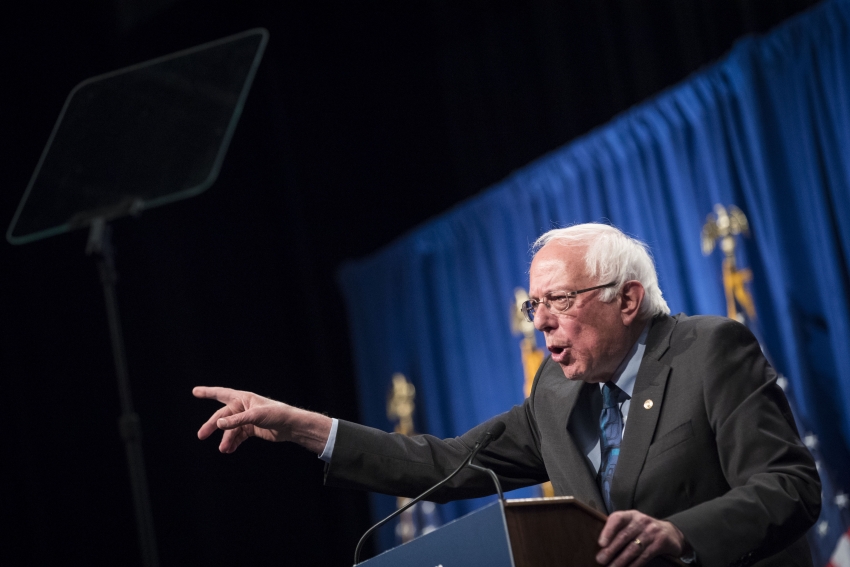 Bernie Sanders Has Laid Out the Stakes of the 2020 Election: Democratic Socialism or Barbarism

In a widely touted speech, Sanders explained why an unapologetic democratic socialist vision is the only antidote to the oligarchy and authoritarianism embodied by President Trump.

Sanders argued that democratic socialism is not some radical philosophy to be feared, but rather the antidote to the growing dogmas of bigotry—one that could overcome the hate-filled fantasies of the Steve Bannons of the world.

The opening salvo of Donald Trump’s reelection campaign came not in a defamatory speech or presidential tweetstorm, but in an overlooked report put out in October 2018 by his White House Council of Economic Advisers titled “The Opportunity Costs of Socialism.”

The bizarre document featured a mash-up of Margaret Thatcher quotes, paeans to Nordic truck drivers and allegories about Christmas sweaters, but its central conceit—that a socialist menace haunts the American public—has come to animate Trump’s talking points as he sets his sights on 2020.

In his State of the Union address in February, Trump thundered, “Tonight, we renew our resolve that America will never be a socialist country.” At the Conservative Political Action Conference in March, he claimed, “We believe in the American dream, not the socialist nightmare.” During a National Republican Campaign Committee fundraiser in April, he said, “I love the idea of ‘Keep America Great,’ because you know what it says is we’ve made it great. Now we’re going to keep it great, because these socialists will destroy it.”

Such fear mongering is not new. Barack Obama was consistently derided as a freedom-hating socialist by everyone from billionaire David Koch to former Texas Gov. Rick Perry. Indeed, from William Jennings Bryan in the 1890s to Franklin Delano Roosevelt in the 1930s to Bill Clinton in the 1990s, conservatives have attempted to tar Democratic presidential candidates as socialist agents.

The difference in 2020 is that this time around, one of the Democratic front runners embraces the socialist label. On Wednesday, at George Washington University, Sen. Bernie Sanders delivered an unwavering defense of democratic socialism in a major campaign speech.

“Democratic socialism to me requires achieving political and economic freedom in every community in this country,” said Sanders.

Presenting a defense that tethered the principles of democratic socialism to battles throughout U.S. history to expand freedom and provide a better life for the American people, Sanders said that the task today is to “take up the unfinished business of the New Deal and carry it to completion.”

But Sanders made clear that his vision goes beyond that of FDR’s. “We must recognize that in the 21st century, in the wealthiest country in the history of the world, economic rights are human rights,” Sanders said, making a case for enshrining not only healthcare as a right, but also education, employment, housing and the ability to live in a “clean environment.”

This conception of democratic socialism sees such basic human needs as inalienable, and demands they not be subject to market forces. During the speech, Sanders raised the question of whether people are truly free if they can’t afford to go to the doctor, or if they have to work 80 hours a week to make a living.

With inequality levels mirroring those of the Gilded Age, and corporate profits at an all-time high, democratic socialism is finding a fervent audience: More than 6 in 10 Americans are unhappy with the current size and influence of corporations, and the same proportion say the current distribution of money and wealth in our society is unfair. Medicare for All, Sanders' trademark proposal, is now backed by 70 percent of Americans, and his calls for a jobs guarantee, tuition-free college and a Green New Deal all boast majority support. How would such programs be paid for? More than 75 percent of Americans say we should soak the rich.

Sanders has similarly proposed a democratic socialist approach to workers’ rights. He advocates expanding union rights, increasing employee ownership and creating a worker-run fund that would pay them out dividends.

If the constituent parts of Sanders’ socialist vision are increasingly popular, so is the term itself. Despite the Right’s best attempts to stigmatize socialism, 4 in 10 Americans now say they would rather live in a socialist country than a capitalist one, and majorities of women, young people and Democrats all now say they favor socialism over capitalism.

In his speech, Sanders did more than repeat his calls for a more egalitarian politics and bold left-wing policies. He argued that we are up against an oligarchy that has captured our political system, and that we must stand in solidarity with the movements of working people who are demanding fundamental change—from striking teachers, to climate justice organizers to women fighting for reproductive freedom.

Sanders made the case that the term “free market” is an oxymoron. Citing the Wall Street bailouts of 2008 and subsidies heaped each year on the fossil fuel industry and monopolistic enterprises like Amazon, Sanders said that Trump and his fellow oligarchs have long engaged in a form of “corporate socialism” that uses the power of the state to guarantee their continued profitability. Quoting Dr. Martin Luther King Jr., who said “this country has socialism for the rich, rugged individualism for the poor,” Sanders argued that nothing short of a full-fledged economic transformation can reverse this arrangement.

By reframing the debate around socialism to rebuke the greed of Trump and corporate America, Sanders attempted to turn the tables on critics who dismiss his democratic socialist agenda. “The issue of unfettered capitalism is not just an academic debate,” he said. “Poverty, economic distress and despair are life-threatening issues for millions of working people in the country.”

He linked the turn toward oligarchy and authoritarianism in America to the pantheon of rightwing authoritarian leaders who have consolidated power around the world. He named names: Jair Bolsonaro in Brazil, Vladimir Putin in Russia, Xi Jinping in China, Rodrigo Duterte in the Philippines, Muhammed bin Salman in Saudi Arabia, Viktor Orbán in Hungary and America’s own Donald Trump.

“These leaders meld corporatist economics with xenophobia and authoritarianism,” said Sanders. “They redirect popular anger about inequality and declining economic conditions into violent rage against minorities—whether they are immigrants, racial minorities, religious minorities or the LGBT community. And to suppress dissent, they are cracking down on democracy and human rights.”

In contrast to such hate-mongering, Sanders counterposed democratic socialism which he said seeks “a higher path, a path of compassion, justice and love.”

With hate crimes on the rise across the country, and the Trump administration engaging in such policies as the caging of migrant children, Sanders argued that democratic socialism is not some radical philosophy to be feared, but rather the antidote to the growing dogmas of bigotry—one that could overcome the hate-filled fantasies of the Steve Bannons of the world.

Trump has made his game plan for 2020 abundantly clear: attack the Democrats as the party of socialism. No matter who wins the nomination, whether it’s Sanders, Joe Biden or Kamala Harris, they will surely be smeared as socialists. With his full-throated defense of democratic socialism, Sanders welcomed such a debate, trusting that the American people will be on his side.

Never in modern U.S. history has there been a more clear-cut contest between the forces of “socialism and barbarism,” as the old Marxist idiom goes. If Sanders’ speech is any indication, it’s a fight he’s eager to have.