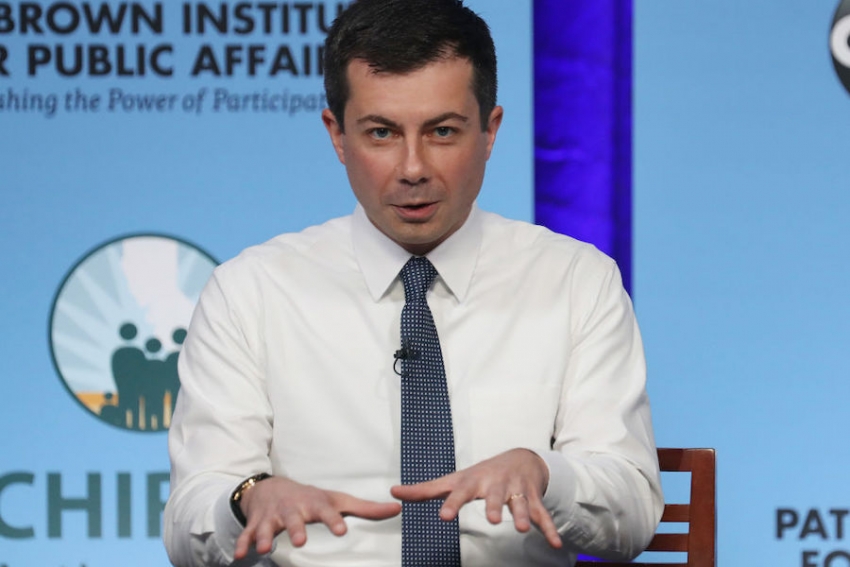 A new dance craze is sweeping New Hampshire. Call it “The Buttigieg,” a team-building bop performed by staff and volunteers on Mayor Pete’s presidential campaign. Videos of the dancers, set to “High Hopes” by Panic! at the Disco, have been making the rounds on social media, shared enthusiastically by Pete fans and mocked mercilessly by his critics.

The song, which Buttigieg also uses at events, is something of a campaign anthem. And that’s fitting: Its lyrics express something dangerously awry about Mayor Pete’s worldview.

“High hopes” is about the lone individual succeeding against the odds: “I didn’t know how but I always had a feeling / I was going to be that one in a million.”

One reading would be that Buttigieg and his campaign see themselves as optimistic underdogs, scrappy aspirers to the American Dream. But while “underdog” may superficially fit the 37-year-old mayor of a town of 100,000, it does not fit the rest of Pete’s profile. Buttigieg, the son of academics, is a Harvard graduate and Rhodes scholar who was earning six figures by the age of 26. He has outraised every Democratic candidate except Bernie Sanders and Elizabeth Warren, and outraised everyone among big-money donors. His current polling surge required help in high places.

So let’s hope it’s not Pete himself whose successes we’re singing. Charitably, then, Team Pete may see in the song a metaphor for the country—the mayor has high hopes for America.

If so, that metaphor goes to a very dark place in the first verse: “Manifest destiny / Back in the days / We wanted everything, wanted everything.” Were I running for U.S. president, I would probably not embrace a song that positively invokes Manifest Destiny, a stain on our nation’s past, when “we wanted everything” meant pillage and conquest. The 19th century saw tens of thousands of Native Americans displaced, thousands more killed and an unjust war against Mexico, all so that America could stretch from sea to shining sea. To this day, success in America still means competition and exploitation—whether you’re a corporate CEO, a Wall Street banker, or a consultant at a big firm like McKinsey.

If the lyrics are troubling, the music video is worse.

A white man in a suit (the band’s lead singer) exits a Lyft and begins walking up the outside of a building, defying gravity. A multi-racial crowd gathers to cheer him on from below. They applaud him all the way to the top, where he steps onto the roof and finds his band. We never see the crowd again.

Let’s break this down: A white man, publicly breaking the law (of gravity) with no repercussions, is supported in his climb by a diverse working class, then parties with those who are already at the top. It's not clear if those at the bottom even get to enjoy the concert. The lyrics exhort, “Stay up on that rise and never come down”—no mention of solidarity or bringing others up with you.

Cultural critic John Weeks has argued that the song and its video offer a perfect narrative of white male privilege: “The prophecy to be fulfilled in ‘High Hopes’ is that of the white man’s privileged place within the symbolic order.” “High Hopes” tells us if you’re talented, if your hopes are high, you can be the “one in a million” who succeeds.

I am not saying the man in the video represents Buttigieg himself. But the video does represent Buttigieg’s worldview: Mayor Pete, a privileged white man whose talent, ambition and class background propelled him to academic and professional success, is precisely the kind of person to believe that hard work and vision pay off—it worked for him, right?

Recent comments of Buttigieg’s suggest that he is a true believer in meritocracy. The progressive group People’s Action asked candidates how the government should address inequity. Buttigieg’s answer focused on “uneven distribution of opportunity”; the government’s role is “to ensure equality of opportunity,” he said, through unspecified “federal programs” that “eliminat[e] barriers.” The implication is that if everyone got a fair shot, justice would be achieved. Unlike Sanders and Julián Castro, he did not mention the need for a social safety net or secure economic rights. Unlike Sanders, Castro, Warren or Kamala Harris, he did not assign any blame to corporations or the wealthy.

In fact, compared to his competitors, his hopes don’t really seem that high. He wants to cancel some student debt; Sanders wants to cancel all of it. He opposes a job guarantee, and his proposed version of a Green New Deal is slimmer than Sanders’ or Warren’s.

And his meritocratic vision, focused on equality of opportunity, ignores that so long as some achieve wealth and power and others are left behind, those who succeed will pull the ladder up behind them. His message, and his theme song, are ultimately fine with inequality so long as those at the top can convince themselves they earned it.

So when Buttigieg volunteers dance along to lyrics like “didn’t have a dime, but I always had a vision”—as their candidate stands awash in rich donors’ dimes—they’re dancing to a fairy tale.

The views expressed are the author's own. As a 501(c)3 nonprofit, In These Times does not support or oppose candidates for political office​.