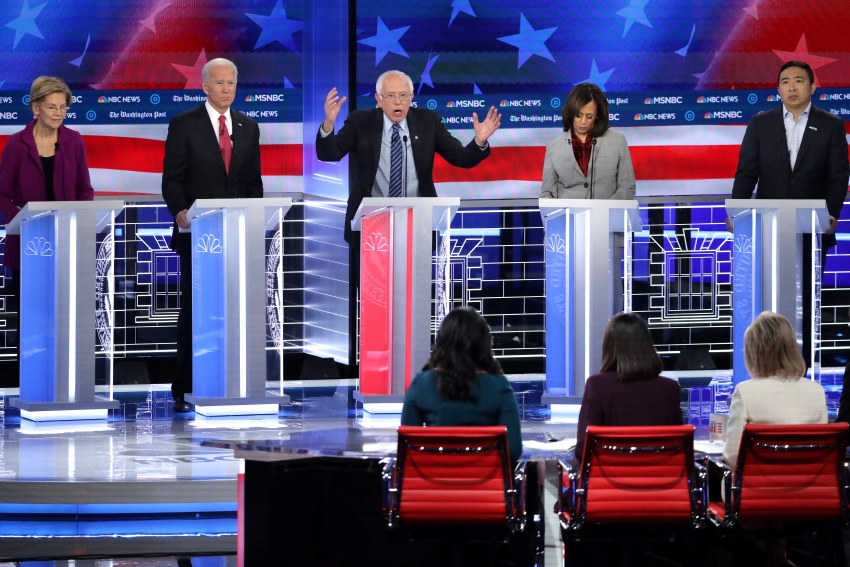 During the debate and in the spin room, Sanders was treated more like an outsider than a front runner. It’s part of a broader anti-Bernie slant in the “liberal” network’s coverage.

Wednesday night’s Democratic presidential debate was hosted by MSNBC, and the result could have been expected for anyone who read In These Times’ recent two-month study of the network’s coverage of the three nationally leading candidates.

In that story (which I authored), In These Times found that the network consistently covers Bernie Sanders the least of the top three candidates, as well as most negatively; that it covers Elizabeth Warren most positively; and that both are dwarfed by the network’s overwhelming focus on Joe Biden, who was often portrayed as the “safest” choice of the field. The network’s political coverage also revolved almost exclusively around fluctuating poll numbers and “electability”—as defined by its hosts and guests.

These features found their way into Wednesday’s debate, which was preceded by a panel discussion devoted, as so much of the network’s 2020 coverage has been, to narrowing the imaginations of its largely older, Democratic-voting viewership. In the wake of two weeks of impeachment hearings, the panelists attempted to frame the debate as a referendum on Trump, with former centrist Missouri Sen. Claire McCaskill, ousted in 2018 and criticized by local African-American leaders for not doing enough to excite black voters in the state, predicting that “Trump will be front and center in the debate tonight.”

“The party is getting the rap, deservedly so, for becoming this traveling purity test,” said anchor Brian Williams. “Will a day like today force a stage like this one to coalesce around a message of ‘we’ve gotta beat this guy?’”

Chris Matthews, who together with Williams made up MSNBC’s most anti-Sanders contingent of anchors, went on to outline the way the network has allowed its own commercial interests to help shape its news content.

“The Democratic Party right now I believe is an anti-Trump party,” he said. “I can tell from the ratings people would much rather watch the decline and fall of Donald Trump than watch the battle among these people. … Which tells me, they really, really have one passion going into next year’s election: Beat Trump. I think that’s driving everything.”

It was up to Steve Schmidt—longtime Republican, chief strategist for John McCain’s 2008 campaign, and fresh off of advising Starbucks billionaire Howard Schultz’s aborted anti-progressive run—to deliver the left-punching bromides usually taken up by McCaskill.

Warning there was a “danger with some of the ideology that we’ve seen front and center in this field,” Schmidt asserted that “a sociopath will beat a socialist, I think, seven days a week and twice on Sunday,” as the camera cut to Sanders getting ready on stage. Schmidt appeared to forget that his own candidate in 2008 had lost handily after trying to label his Democratic opponent a “socialist.” McCaskill, meanwhile, noted that black women “are overrepresented” in the Democratic primary contest and that candidates should keep in mind “that general election audience in November.”

The dynamics of the debate itself also mirrored In These Times’ recent findings, albeit in subtler ways. Though in the final New York Times tally, Sanders landed fourth in terms of speaking time, he was about a minute behind Joe Biden who sat in third place, and Sanders’ time was in the same vicinity as lower-tier candidates like Cory Booker (barely registering in both early states and nationally), Kamala Harris (polling at single digits), and Amy Klobuchar, another centrist candidate whose “electability” has been talked up by pundits even as she flounders with little support among voters.

Despite the final result, at 40 minutes into the debate, the New York Times clocked Sanders at fourth from the bottom in terms of speaking time, with Booker, Harris, Klobuchar and Pete Buttigieg far ahead of him. Thirteen minutes later, he had moved up slightly in the shuffle, with Klobuchar now at the very top. Nine minutes after that, he was again fourth from the bottom, with Klobuchar sitting at third. The moderators threw it to Klobuchar after an answer from billionaire Tom Steyer about special interest money and term limits that name-checked Sanders but didn’t mention her—breaking one of the express rules of the debate format.

Sanders was also notably skipped over on the topics of unaffordable housing (though Tom Steyer, who has no housing plan, spoke on the issue), voting rights (though he made a point about it during an unrelated exchange between Tulsi Gabbard and Buttigieg), and white supremacist terrorism, despite being the only Jewish candidate on stage and having publishing an op-ed about combating antisemitism earlier this month. Sanders was also left out of the discussion about racial justice that followed, which Warren was asked to weigh in on.

Warren wound up markedly ahead of all other candidates in speaking time. This result was similar to the nearly six-minute advantage she held over her closest rival in October’s debate (in which she had a nearly 10-minute lead on Sanders), and her second-place finish in September’s debate, where she held more than a two-minute advantage over Sanders.

This tracks with In These Times’ findings of MSNBC’s coverage over August and September. Warren was not only the most positively covered candidate across the network’s programs—even on shows typically unfriendly to progressivism, such as Matthews’ Hardball—but there was a tangible shift in the way the network covered her candidacy, increasingly elevating Warren explicitly at Sanders’ expense in September, and hyping that month’s debate as a showdown between Warren and Biden, even as Sanders maintained a solid standing in the top three. September’s debate also saw Sanders passed over for a reply to an answer in which he was name-checked, in this case after Klobuchar had explicitly mentioned Sanders in her attack on the Medicare for All bill he authored. The moderator instead chose to seek a reply from Warren.

Though In These Times didn’t analyze coverage of Buttigieg for those months, his candidacy was the wildcard in this debate. Buttigieg’s rise in the polls in Iowa and New Hampshire—and only those states, given that the South Bend mayor is enjoying 0% black support in one poll and is a distant fourth nationally—has been a major campaign narrative this month, particularly as enthusiasm for Biden has somewhat dimmed. Buttigieg ended up with the second-most speaking time last night, around the same amount as Biden.

In terms of policy issues, the debate moderators gave short shrift to a number of issues that might have interested Democratic voters. Climate change was discussed, but not in-depth. The coup in Bolivia was ignored. Warren’s new transition plan for Medicare for All—which would delay passing universal healthcare until year three of her presidency, and has been interpreted by Wall Street, the co-founder of centrist Wall Street-funded think tank Third Way, and several media commentators as a sign she’s backing away from Sanders’ policy—went completely unmentioned, even as Matthews had characterized her as “pulling back on Medicare for All” before the debate.

A string of recent controversies around Buttigieg, such as the meager amount of contracts given to minority-owned businesses by his South Bend mayoral office, his claiming of African-American endorsers who had never actually endorsed him, and his campaign’s casting of homophobia as the reason for his non-existent black support, likewise went unmentioned. (The moderators did, however, ask Sanders if he agreed with his supporters chanting “lock him up” at his rallies).

MSNBC’s post-debate discussion returned to business as usual, with commentators once again covering for another poor Biden performance that saw the former vice president claim he had been picked as Obama’s running mate because “I come out of the black community, in terms of my support,” and that he had the endorsement of the “only” black woman senator in history, to which Kamala Harris laughed. (“I thought he did pretty well,” said panelist and Washington Post columnist Eugene Robinson).

Matthews joined Klobuchar in decrying the policy of “free everything” (“I know these things sound good on a bumper sticker, and maybe they want to throw in a free car…”). Matthews also castigated Sanders for saying that “our system is corrupt,” warning him to “be careful about that language” because “that’s too strong.” Williams cast the contest as between “the side of purity-testing” and middle-of-the-road “electability.” Schmidt declared that “Mayor Pete had an exceptional night” with a “pretty flawless” performance and attacked Gabbard, who had criticized Buttigieg, as “just awful,” “spectacularly bad,” and “dishonest.” (Biden, meanwhile, had “probably his strongest debate performance,” according to Schmidt).

Still, there were some signs things may be changing at the network. Among the guests asked by Williams to weigh in was Michael Moore, who made a forthright and rare (for the network) case for Sanders’ candidacy. Anchor Lawrence O’Donnell, while generally praising Biden’s performance, harshly criticized the front runner’s onstage erasure of Harris, calling it “as bad a moment as he could have had.”

Perhaps the network is realizing that there’s a limit to the extent it can shape political reality. Or, perhaps, reality is starting to push back.