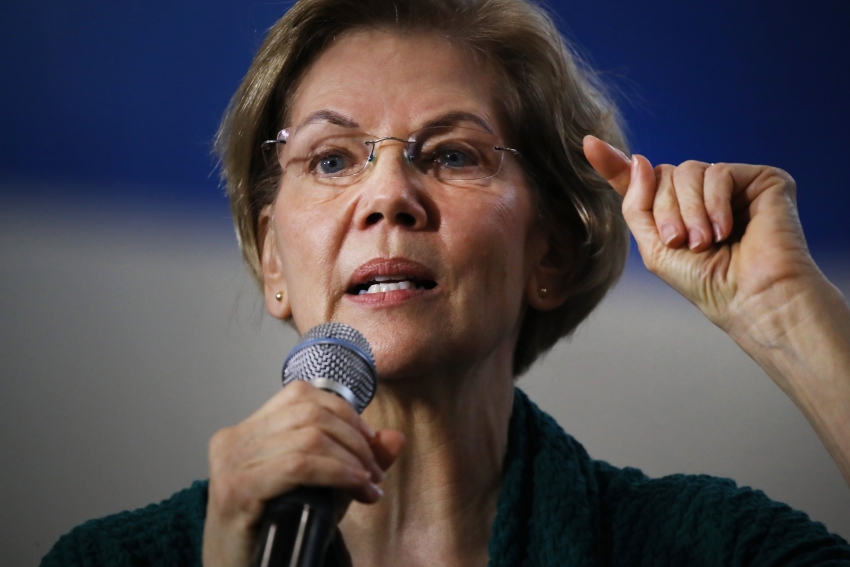 When I Asked Elizabeth Warren to Speak Out Against the Yemen War, She Refused

If this was the response from one of the most progressive Senators in Congress, what hope is there for this unconstitutional war to end?

Back in 2015, I was in the middle of my doctoral studies at Harvard University, and as a resident of Massachusetts, Elizabeth Warren was my senator. For years, my country of birth, Yemen, had been going through upheaval that initially began with the 2011 revolution that ousted Yemen’s longtime dictator, President Ali Abdullah Saleh. Three years later, turmoil grew after the Houthi takeover of Sana’a, culminating in a foreign military intervention in March 2015. The onslaught on the Middle East’s poorest country was sudden, and it quickly wreaked havoc on millions of civilians. It was launched by Saudi Arabia, ostensibly to restore Yemen’s interim president, Abd Rabbu Mansour Hadi, to power. The intervention had full support from the United Arab Emirates, Kuwait, Qatar, Bahrain, Egypt, Morocco, and other Arab and African allies. But this was also a U.S. war on Yemen.

President Obama had unconstitutionally bypassed Congress to support the Saudis in their war against Yemen. On the first day of the war, the White House declared support for the Saudi-led war and expressed interest in protecting Saudi and allies’ security. President Obama “authorized the provision of logistical and intelligence support to Gulf Cooperation Council-led military operations,” the statement read. This “logistical and intelligence support” amounted to full participation in the war: The U.S. military provided mid-air refueling to the Saudi coalition, trained their pilots, updated their vehicles and aircrafts, and even provided targeting assistance. The Saudi-UAE coalition, of which the U.S. was and is still actively a part, also imposed a naval and air blockade on Yemen, a country that imported 90% of its food prior to the war. Soon, Yemenis were being bombed and starved in massive numbers. Nearly every Yemeni family, including mine, has lost loved ones. Nearly all Yemenis have been devastated by this war.

Within months, Peter Maurer of the International Committee for the Red Cross warned, “Yemen after 5 months looks like Syria after 5 years.” Yet, media outlets in the United States were barely covering the conflict, and when they did, they inaccurately presented it as a Saudi-Iran proxy war, overstating Iran’s role. The role of the U.S. military, which was (and still is) essential to the Saudis, was often ignored.

Desperate to learn more about what was happening in Yemen, I joined Twitter on March 26, 2015—the day the war began. I began following Yemenis in Yemen who were desperately tweeting about the ongoing horrors they were experiencing. They posted horrific photos showing the aftermath of bombing campaigns that did not seem to discriminate between military and civilian targets. My extended family along with 28 million others in Yemen was being bombed daily. Food supplies ran short. Diseases like cholera spread. Famine was threatening millions (today, nearly half of the population in Yemen is at risk of starvation.) Yet, here in the United States, few dared to question Obama’s support for the war.

Feeling helpless, I decided to write a letter to my senator, Elizabeth Warren. As a progressive senator, I hoped she would take the lead in calling for an end to U.S. intervention in Yemen. I hoped she would defend the Constitution and protect innocent lives. I was wrong.

She replied in early September 2015, noting the United States was “working through the United Nations to reach a political solution.” This was a blatant lie. Political solutions don't involve bombs. She wrote, “I support U.S. efforts, in cooperation with our allies to secure a cessation of hostilities, to allow the flow of humanitarian aid for millions of Yemenis in desperate need for food, water, and medicine, and to return to a process of political reconciliation that will lead to a peaceful and unified Yemen.” In essence, she noted Yemenis’ suffering without acknowledging the U.S. role in causing their suffering. The Saudis—U.S. allies—were the ones bombing and starving Yemen, yet she was unwilling to speak out against them. 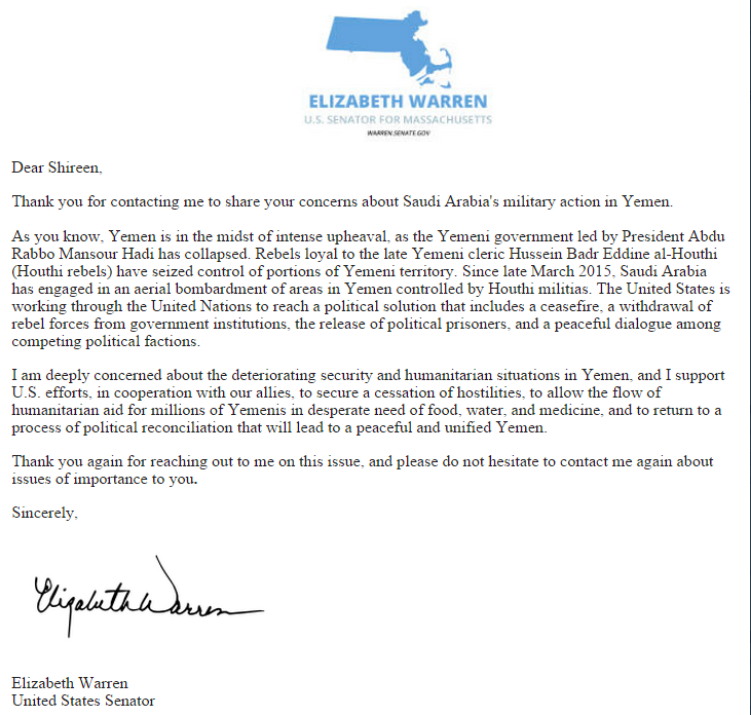 As I read her letter, I was devastated. If this was the response from one of the most progressive Senators in Congress, what hope is there for this unconstitutional war to end? I took the initial letter I wrote to Warren and used it to launch an online petition, urging Americans to speak out against the military intervention in Yemen. Shortly thereafter, I was contacted by Stephen Snyder, a producer for PRI’s The World. He had seen my petition and letter, and he wanted me to speak about this issue on air. At first I refused, then nervously agreed to give an interview. I’ve been speaking out against the war in Yemen since then, writing and speaking to educate fellow Americans about our country’s role in the world’s worst humanitarian crisis.

For a long time, however, there seemed to be no end in sight. Advocating for a war few knew about and fewer still cared about was taxing. President Trump then inherited the war in 2017 and continued—and even escalated—business as usual. Then, in 2017, Rep. Ro Khanna (D-Calif.) gave me and millions in Yemen hope when he passed the War Powers Act in the House, declaring the U.S.’ role in the war unconstitutional.

Months later, Senator Bernie Sanders (I-Vt.) invoked the War Powers Act in the Senate along with his colleagues Senators Chris Murphy (D-Conn. and Mike Lee (R-Utah). Never had Congress before then asserted its constitutional authority over war. I watched Senator Sanders and his colleagues encounter countless hurdles, yet never giving up on passing the bill. They shed light on an issue that was—and is still—largely absent from mainstream consciousness. Finally, in 2019, Congress passed this historic bill calling for the removal of U.S. armed forces from the war in Yemen.

And while Senator Warren supported the bill's passing, this position was mainstream among Democrats by then: All voting Democrats in the House and Senate, 16 House Republicans, and seven Senate Republicans voted in favor of the War Powers bill.

By 2019, an estimated 85,000 children between the ages of zero and five had starved to death. At least 90,000 Yemenis were killed, according to one estimate. One child was dying every 10 minutes. Nearly 80% of the population was in need of humanitarian assistance to survive.

Yemen was, and still is, the world's worst humanitarian crisis.

When I think about Senator Warren's response to my letter, it’s difficult to reconcile her position with her so-called progressive values. She, like others in the Obama administration, chose party politics over human lives. They prioritized their support for their Saudi allies over the Constitution they swore to uphold. Collectively, their inactions or indifference helped create a humanitarian crisis as large as Yemen’s.

Yet, unlike Warren, Senator Bernie Sanders fought for this still relatively unknown war to end. He spoke passionately about the millions of Yemeni lives that were threatened by U.S. actions. His progressive policies were not limited to our country's borders, and for that reason, I became a citizen two weeks ago to vote for Bernie in the Michigan primary next week.

Disclosure: Views expressed are those of the writer. As a 501(c)3 nonprofit, In These Times does not support or oppose any candidate for public office.