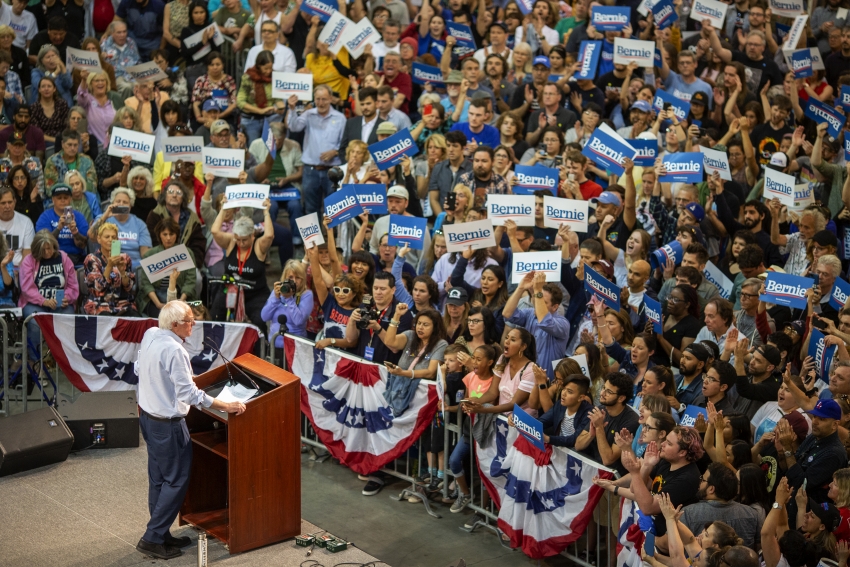 Sen. Bernie Sanders appears at a campaign rally at the Pasadena Convention Center on May 31, 2019 in Pasadena, California. (Photo by David McNew/Getty Images)

Inside the campaign’s California organizing strategy.

On election day, Caballer-Christenson was part of a large bilingual group that met at a nearby train station, and dispersed into the Fruitvale neighborhood to knock on doors the campaign had already hit before.

Senator Bernie Sanders secured victory in California’s primary election Tuesday. Minutes after the first wave of results was released at 8:00 p.m., the Associated Press called the race for Sanders. His lead continued, and as of Wednesday morning, he’d secured 33.6% percent of the vote, to Former Vice President Joe Biden’s 24.9%.

As votes continue to be counted, the distribution of delegates isn’t final, yet. But NBC News predicts that Biden gained 458 delegates on Super Tuesday, bringing his total win so far to 511. As of Wednesday it appears Sanders won 399 new delegates, bumping him up to 459.

With 415 delegates—the most in the nation—California was a key player in this year’s Super Tuesday. But although Sanders won the state, the elections didn’t go off without a hitch. Biden won 10 state primaries, making a strong comeback after lackluster results in Iowa and New Hampshire. In addition to California, Sanders won Utah and Colorado, though lost delegate-heavy Texas to Biden despite initial results showing him in the lead.

Sanders’ campaign for president has honed in on a valuable but unpredictable voter base. Instead of spending energy trying to flip existing voters, his campaign targeted “nonvoters”—just-registered young voters, non-registered voters, sporadic voters and people who don’t turn out for primary elections.

The Sanders campaign has been on the ground in California since the summer of 2019, building relationships in low-income communities and with people of color. There are 22 campaign offices scattered across the state, primarily in working-class and Latino neighborhoods.­­ His staff reflects the mission: Three of the six California area directors are Latino, as­ is the state director of the campaign, Rafael Návar.

The issues Sanders stands by—Medicare for All, the elimination of student debt, free college—resonate for many, but investing immense time and resources into turning out nonvoters is risky. You can get them on board, but will they actually hit the polls?

Results are still coming in, but the results of Sanders’ strategy so far look good. It appears he’s secured 49% of California’s powerful Latino vote, which accounts for 30% of the voting power statewide. Young Latino voters—ages 18 to 29—were his biggest support base in that demographic, with 84% percent casting their vote for Sanders, according to the New York Times. California’s Black voters, however, mirrore­d the rest of the country in their support for Biden: he got 38% of their vote to Sanders’ 18%.

As predicted, Sanders performed well with young voters, securing 68% of the vote from people ages 18 to 24, and 48% of voters ages 25 to 29. But exit polls show a worrying trend: Youth turnout was down from 2016 in North Carolina, Virginia, Tennessee, Vermont and Alabama. And while young people tend to lean toward Sanders, he saw fewer votes from that demographic in many of those states. His performance with young voters in North Carolina, South Carolina, and Virginia appears to have dropped from 2016 to 2020.

California’s votes are still being counted. Jon Jacobo, the campaign’s California Latino Press Secretary, says he was optimistic watching the results roll in on Tuesday night.

“The under-30 support in the Latinx community for Sanders was insane,” he said after the campaign declared victory. But there’s a lot of data still emerging which the campaign plans to study closely.

“I’m really interested to look at the cross tags with the older folks, and see if the same generational divide with the African-American community in, say, South Carolina is similar to what you’ll find in the younger and older community here,” Jacobo says. “There’s a lot to process and look into, but so far I’m pretty happy.”

And, the verdict is still out on how many new voters hit the polls for Sanders on Tuesday. While the exit polls prove that his campaign’s on-the-ground efforts to engage and turn out Latino and young voters was not in vain, the battle to get nonvoters to the polls was not easy.

Alicia Caballero-Christenson, 34, was door knocking for Sanders in Fruitvale, Calif. at 7:00 a.m. Tuesday. She’s a professor in Mexican and Latin American Studies at a local community college, and while at this time of year she’s normally on sabbatical in Mexico, she stuck around to volunteer for the Sanders campaign.

On election day, Caballer-Christenson was part of a large bilingual group that met at a nearby train station, and dispersed into the Fruitvale neighborhood to knock on doors the campaign had already hit before. Fruitvale, a working-class neighborhood, has the largest population of Latinos in Oakland, accounting for more than 62% of its residents.

The early morning outreach was slow: most people were already at work, or getting their kids ready to go to school. After a few hours of door knocking, Caballero-Christenson visited a polling station to cross-check its list of voters who’d voted in person with her campaign list of known Sanders supporters. At 2:00, p.m., it wasn’t looking good.

”There were very few people crossed off on their list that we have on our list,” she said. “It was kind of disappointing.”

But it’s also not entirely surprising to Caballero-Christenson. “Overwhelmingly people in Fruitvale are supportive of Bernie, but I think a lot of them don’t know what day the election is,” she says.

And even if they do, there’s a history of apathy to overcome.

“People are frustrated with the political process,” she explains. “They say ‘it doesn’t really matter,’ or ‘this country doesn’t care about me.’ The hardest part is convincing people who would not show up to show up.”

In Los Angeles, people who did show up may have been discouraged by the long lines at the polls, that held people waiting up to four hours to cast their ballot. On Tuesday night, the Sanders campaign filed an emergency motion to keep polls open until 10:00 p.m., two hours after the mandated closure. The motion requested that all voters who were in line to vote by 10:00 p.m. would be permitted to vote provisionally.

A source close to the campaign told In These Times it was a frantic effort, with a dozen attorneys all drafting and editing pieces of the motion, which was filed in under two hours. Their efforts were in vain; Los Angeles County Registrar-Recorder/County Clerk Dean Logan took no action on the request, stating that anyone in line by 8:00 p.m. would be allowed to vote—but no extension would be made to make up for the day’s long lines.

Sanders’ success in California was not unexpected, though the verdict is still out on whether he’ll be able to win enough delegates nationwide to beat Biden. The success of his outreach to Latino voters, however, bodes well for the future. New Mexico, Arizona, Florida and New York all have large numbers of Latino residents, and as the primaries continue, it’s likely the campaign strategy will get smarter. After all, with each election comes a wealth of data marking how successful—or unsuccessful—efforts have been to turn out nonvoters.

Nuala Bishari is an award-winning freelance reporter based in San Francisco, where she covers politics, homelessness and public health.