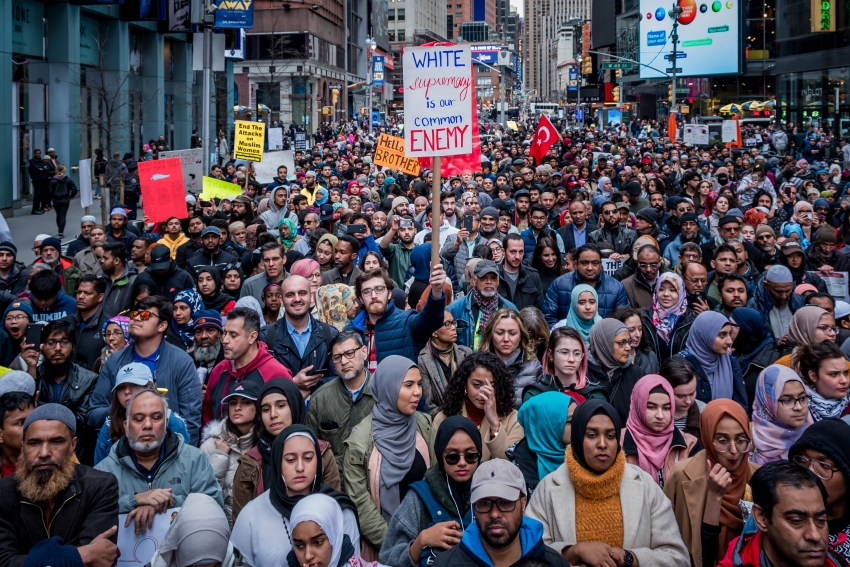 Muslim leaders and allies across New York City held a rally and march against Islamophobia, white supremacy and anti-immigrant bigotry in Times Square on March 24, 2019. (Photo by Erik McGregor/Pacific Press/LightRocket via Getty Images)

We Need a Truth and Reconciliation Process for the Trump Era

When the post-Trump moment comes, there will be a temptation to turn the page. Instead, we need deep reflection.

For Americans to truly emerge from the Trump years and free ourselves from their malignance, we will have to engage in a similar national conversation.

Ever since the Senate declined to remove Donald Trump from office, the president has continued his victory lap, kicking off his reelection pitch with the State of the Union address and launching retaliatory firings and pressure on the officials who testified against him. Trump will face his next test at the ballot box in November. Sooner or later, Donald Trump will cease to be president. But whether we emerge from the Trump era as a true democracy depends on more than his removal; it depends on whether we transcend Trumpism as an ideology and a policy agenda.

The impeachment inquiry did not touch on the many moral atrocities of this administration, from family separation and the caging of children at the border to the expanded “Muslim ban.” It didn’t touch the weaponization of immigration enforcement against Black and brown people. It did not address the slashing of food stamps, cuts to health care and education, or the deliberate and cruel dismantling of civil rights protections. The narrow charges ignored the myriad policies that have directly contributed to the destruction of so many families and livelihoods, particularly in Black, brown, and indigenous communities. To move past the Trump era, we must first have an honest reckoning with these harms, and the racial violence they represent.

Even opening this conversation will be, for many, a stretch. Our political and popular discourse tends to assume the unique genius of American democracy. But in reality, we have more in common with countries struggling to build democratic societies in the wake of civil war, ethnic conflict, and the legacies of colonial subjugation and violence. To acknowledge that reality is not to disparage the hope of American democracy; it is to honor those aspirations by honestly facing the ways in which our society continues to be undemocratic. When the post-Trump moment comes, there will be a temptation, as is in other post-conflict societies, to return to a semblance of normalcy and the rule of law, even at the cost of perpetuating repressive policies and sweeping the violence of policies like family separation under the rug in the interest of “turning the page.”

But if we are to build a shared and inclusive democracy after Trump, we will have to create a collective, public narrative that resists these easy outs, and have an honest conversation that testifies to the truth of what we as a country have endured—and in particular, the kinds of violence on Black, brown, and indigenous communities that so many Americans were willing to tolerate if not champion. After the collapse of the apartheid regime, South Africa created a Truth and Reconciliation Commission (TRC). While there is some debate about the efficacy and impact of the TRC process, at a minimum it provided a forum for powerful storytelling, forging a shared narrative of how the regime had enabled and perpetuated violence. For Americans to truly emerge from the Trump years and free ourselves from their malignance, we will have to engage in a similar national conversation.

First, we must resist easy frames of “forgiveness” that too often pressure affected communities to “move on,” erasing what philosopher Myisha Cherry calls the “justified rage” of communities under threat. We as a country are well-versed in moral erasure. Civil War historians spent decades supplanting the histories of the struggle for Black freedom and the violent imposition of Jim Crow with the narrative of fraternal reunion between North and South, and the valorization of the Confederacy’s “Lost Cause.” We continue to evade accounts of how the American founding was premised on the violent destruction of Native people’s rights and communities. More recently, we avoided any real moral accounting for the lives lost under the false pretenses of the Iraq and Afghanistan wars, while the Obama administration deliberately chose to avoid prosecuting perpetrators of Bush-era torture, or the 2008 financial crisis.

Second, we will have to overcome the challenges of our current media and narrative environment. The TRC process in South Africa achieved much of its impact due to the perceived legitimacy and widespread media coverage of the events. But today our fragmented media ecosystem, from Fox News to Facebook, breeds echo chambers, polarization and mutual distrust across communities. Trump and Trumpism thrive in this media environment, and gains more political force, as misinformation and political conflict are weaponized to capture viewers’ attention. Even our longer-term cultural and political narratives are skewed by the often-hidden politics shaping everything from school history books to pop culture.

Third, we must back up any shared conversation with real change. Storytelling by itself does not create accountability or progress unless paired with structural reforms that transform the institutions and conditions that led to the moral harms in the first place. Reconciliation need not bar actual consequences; indeed, it must stem from a genuine commitment to justice, and a willingness to name and then actively dismantle the deep structural roots of racial violence. That means we must take seriously the need to tear down our own systems of state-sponsored, unaccountable violence—systems that were built by leaders of both parties before they were weaponized by Trump: ICE, the mass incarceration complex, and the concentration of untrammeled war powers in the executive branch, not to mention the more subtle racialized violence of our environmental and economic policies, which create such damage in communities of color.

To do all this is a tall order. But we have some powerful experiences of public reckoning to draw upon. The launch of the National Memorial for Peace and Justice is a compelling example of how we can grapple with the violence of lynching and Jim Crow and the persistence of white supremacy. The push to make reparations a serious policy discussion, the battles over Confederate monuments, and The New York Times’ 1619 Project all represent interventions that force us to better understand the real history of racial violence—and challenge us to affirm our shared aspirations for an antiracist, inclusive democratic future. If it’s a democracy we want, we have to do more than just vote Trump out of office. Ultimately, we will have to also reckon with the racial violence of the past four years, and build a shared commitment to dismantle those ideologies and institutions that preclude democracy’s future.

K. Sabeel Rahman is President of Demos. His latest book, with Hollie Russon Gilman, is Civic Power: Rebuilding American Democracy in an Era of Crisis.