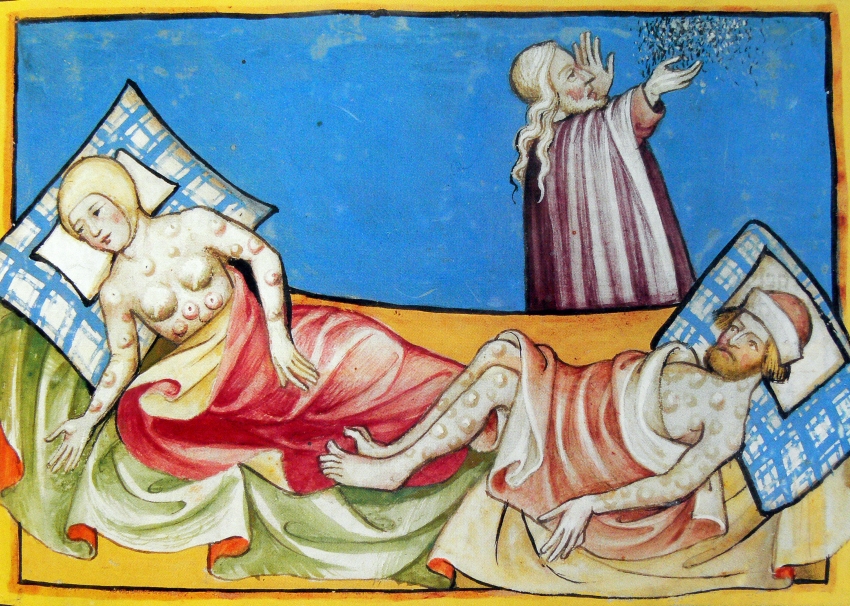 Miniature depicting a couple suffering from the blisters of the Black Death, the bubonic plague that swept Europe in the Middle Ages. From the Swiss manuscript the Toggenburg Bible, 1411. Pigment on vellum. (Photo by VCG Wilson/Corbis via Getty Images)

A Scholar of Pandemics and Inequality Peers Into America’s Future

If the financial downturn proves to be intractable, “all bets are off,” says scholar Walter Scheidel.

"If there is one lesson we can draw from history, it is: What really matters is the way that this kind of crisis shapes political preferences and decision making."

In times of doom and existential panic, there is no one better to turn to than Walter Scheidel. The Stanford professor and scholar of social and economic history is the author of The Great Leveler, a 2017 book that explored the history of inequality over thousands of years and came to the grim conclusion that only a few things have ever been strong enough to counteract it. “Four different kinds of violent ruptures have flattened inequality,” the book said. “Mass mobilization warfare, transformative revolution, state failure and lethal pandemics.”

I spoke to Scheidel about what history can tell us about the outcome of our own pandemic.

Hamilton Nolan: The Black Death is the classic example of a terrible plague. What happened to inequality levels during and after that?

Walter Scheidel: What you have in the Black Death is a very different dynamic from what you have today, because a lot of people died—maybe a third of the population of Europe. Half the population of England. Not all at once, but over the course of several generations, because there were recurring waves of the plague. As a result of this, you eventually get a shortage of workers, which means that their labor becomes more valuable. They can charge much higher wages. Everything else is unchanged: There’s a certain amount of land, a certain amount of capital. The rich who own the means of production are less rich, and the workers who sell their labor are less poor. And it lasts for 100 or 150 years, until the plague goes away and the population comes back.

Hamilton: So the increased value of labor doesn’t tend to persist after the plague is over?

Walter: No, because it’s a Malthusian scenario. Once the population keeps recovering, and you go back to the pre-plague population, wages go down to where they used to be.

Hamilton: Do pandemics have any other mechanisms that contribute to equality, other than increasing the value of labor?

Walter: Yeah. When this happens, the elites are not happy with this. They don’t want to pay higher wages, and they don’t want to accept lower rates from peasants. So they try to force people to maintain the existing arrangements, and there is violent resistance—peasant uprisings, all kinds of things. There’s pushback by the elites, and sometimes they succeed, and sometimes they don’t. So it’s not just population loss, it’s also political regime types, and the political system determines what the actual outcome is. If you are in England, feudalism goes away, and people enter into free labor contracts and they can bargain for the best deal. If you’re in Russia, then the nobility will reintroduce serfdom and force people to work in unfavorable conditions. It depends very much on what the overall setup is.

Generally we see that for late epidemics, elites learn how to deal with this, so when the plague returns in the 17th century, we don’t see a comparable reduction in inequality, because by then they had figured out what to do about it.

Hamilton: What did the elites learn?

Walter: In terms of wealth concentration, they figured out how to keep fortunes from dissipating. When the heirs died, fortunes were dispersed. And they created various legal arrangements, like trusts, to make sure that wealth remains concentrated even in this period.

Hamilton: How susceptible do you think we are today to the same equalizing mechanisms from the coronavirus pandemic?

Walter: I think the basic dynamic doesn’t apply for two reasons. The death rate even in the worst scenario is going to be an order of magnitude lower than it was during these earlier plagues, and the labor force is particularly protected. And the next generation, the up-and-coming workforce, is particularly protected. So you don’t have a comparable effect for demographic reasons, and the economy is very different. It’s a service economy with very different dynamics.

If there is one lesson we can draw from history, it is: What really matters is the way that this kind of crisis shapes political preferences and decision making. In the past, it was a struggle between the nobility and commoners. Now, it’s the behavior of the electorate. Is it going to influence the way that voters respond to certain policy proposals? More progressive, or more conservative? And that, I think, will be the most important determinant of how this whole thing is going to play out with respect to inequality.

Hamilton: Is it safe to say that that effect is generally radicalizing on the electorate?

Walter: Yeah, that’s the very short answer. There seems to be a correlation: The worse a crisis is, the greater the potential for some sort of radicalization. The fact that ideas that are now considered radical may enter the mainstream. An example might be people buying more into a Sanders approach to things, or a Green New Deal. Especially in a two party system, it doesn’t take that much. It’s one or the other.

Hamilton: Today’s pandemic is global—do you have any idea how it might affect different regions of the world, in terms of inequality?

Walter: The biggest differences might actually be within the group of rich countries. If you live in Sweden, not that much is going to change, because they already have a welfare state and high tax rates and so on. They may tweak the system at the margins, but I don’t think there is much room for substantive change. Whereas if you’re in the United States, or in the United Kingdom or Australia, there’s a lot of room for change, in terms of catching up with other Western countries, in terms of socialized healthcare, progressive taxation, all the rest of it.

That has been on the agenda, it’s worth pointing out, since the last crisis. Which was 12 years ago. Before the financial crisis, nobody ever talked about inequality. Then it entered the mainstream as a topic to talk about, and to worry about. Because there was a recovery and there was no Depression, the lid was kept on, so to speak. It didn’t have any major political consequences. But if this crisis turns out to be more severe, what will happen is that ideas that are already out there—have been out there for the last 12 years—will become more prominent and more popular. That’s really all it takes for a major shift to occur.

The closest analogy would really be the New Deal. There was the so-called “Progressive Era,” but not much changed in that era—and then you have the crash, and 25% unemployment, and no safety net. And all of a sudden, people are very happy to vote for someone who says, “I can fix all this,” and then implements, by American standards, very radical policies.

Hamilton: You’ve studied inequality over very long time frames. What’s your historical perspective on how bad it is in America today?

Walter: By some measures, it’s as bad as it was in 1929, in terms of the top 1% income concentration. Of course, it’s also different because per capita income was much lower back then. If you were poor back then, you were really poor, and now you’re less poor, relatively speaking. In that sense, it’s not as bad. But if you just look at the inequality metrics, it’s just as bad as it was back then.

The other comparison is between the United States and other high income countries. The United States is not doing well in that respect. Our inequality is more like Brazil or China now, which is not great. That’s not a good role model.

Hamilton: What’s your prediction for how this pandemic will affect inequality in America?

Walter: Well, you have the short-term effect, which is the rich are less rich than they were. That’s what we saw in 2008, that there was actually a bit of a dip, but a rebound within a few years. And unless this really turns into a major depression, there will be another rebound sooner or later.

For not-well-protected workers—service sector, gig economy—the effects could be more prolonged, in terms of lost income, higher debt. That could be polarizing. But the real question is, how is this going to affect longer-term policy making? That is the only factor that has the potential to really change things. And it can break both ways. If you have a relatively swift recovery, or effective treatment, or a vaccine, it’s not that hard to go back to business as usual. Because the establishment learned in 2008 what to do. If the financial crisis hadn’t happened, we would not have had this very rapid response, in terms of shoring up financial markets, businesses and so on, because people wouldn’t have known what to do. Now they do know, because there is an actual model. They just take that, do twice as much, and see what happens. If you’re interested in preserving the status quo, that helped.

If, on the other hand, this doesn’t happen, and it turns out to be more intractable, and it leads to a prolonged economic slump, then all bets are off. Everything is really up in the air, the way it was in the 30s.