But a statewide coalition of activists aims to shut it down.

From his office at the Cristo Rey Church in Lansing, Mich., Oscar Castañeda runs a campaign against a new federal immigrant prison, part of President Donald Trump’s escalation of immigration enforcement.

Non-citizens convicted of federal crimes are segregated in privately run CAR prisons. The idea is that prisoners who aren’t slated to return to the United States don’t need educational programming or services like drug treatment, and can be incarcerated more cheaply.

In May 2019, the Trump administration awarded a ten-year, $398 million contract to The GEO Group, the largest private prison corporation in the country, to reopen a shuttered Michigan prison. Located in rural Baldwin, Mich., the North Lake Correctional Facility opened in late 2019 with a capacity of 1,800.

At Cristo Rey, Castañeda convenes weekly meetings of No Detention Centers in Michigan, a coalition of organizations and individuals fighting to keep the state free of any immigrant incarceration facilities — including the North Lake prison. The issue has attracted a ​“huge variety of people,” Castañeda says. ​“For the first time, we’re achieving some state-level unity.”

Unlike detention centers, which are managed by Immigration and Customs Enforcement (ICE), the North Lake facility is a Criminal Alien Requirement (CAR) prison, which are managed by the Bureau of Prisons (BOP). These facilities are specifically for non-citizens who have been convicted of federal crimes. Often, the crime is ​“felony reentry,” or a second unauthorized border crossing, which carries a typical sentence of two years (more for those with prior criminal records). After they serve their time, they are still deported.

Castañeda works as a part-time organizer with Action of Greater Lansing, an assembly of congregations in the Lansing area, housed at Cristo Rey. In addition to addressing the everyday needs, like legal services, of immigrants who visit his office, he frequently speaks at immigration rallies and appears on radio programs on behalf of the campaign against the North Lake prison.

Sitting in his office, Castañeda says, ​“a couple months ago it was difficult and hurtful to understand that we would not be able to prevent the North Lake prison from opening.” But today he is hopeful about winning the battle to shut down the prison, ​“because every week we learn news about financial companies cutting ties with The GEO Group. American citizens are getting to understand how this corporation operates.”

CAR prisons are a relatively new outgrowth of modern mass incarceration. As the War on Drugs exploded the prison population, President Bill Clinton began segregating non-citizens convicted of federal crimes, such as drug trafficking, in privately run CAR prisons contracted through the BOP. The idea was that prisoners who weren’t slated to return to the United States didn’t need educational programming or services like drug treatment, and could be incarcerated more cheaply. 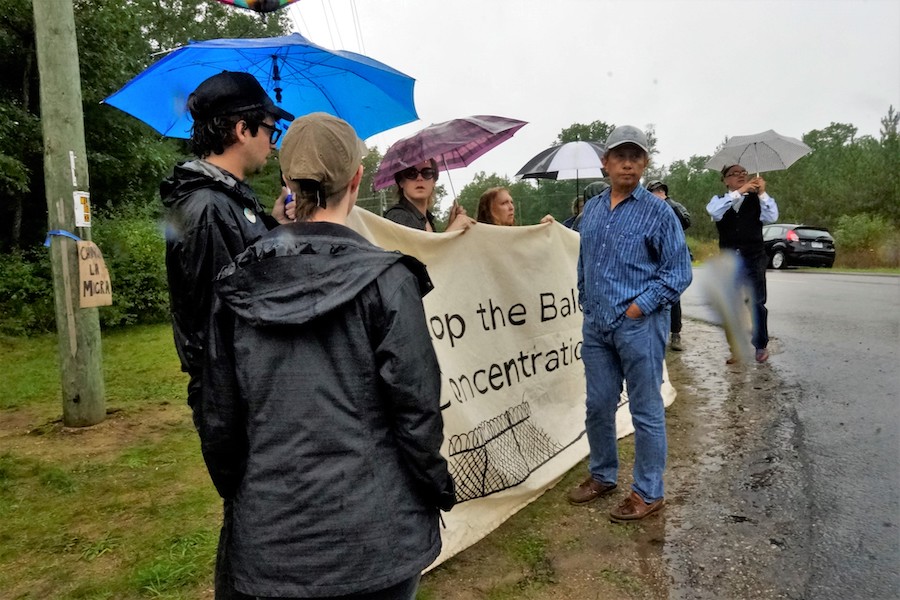 No Detention Centers in Michigan protests the opening of the GEO-Group-run North Lake Correctional Facility in Baldwin, Mich., on Oct 1., 2019. Three protesters were arrested. Photo by Theresa Rosado

Judy Greene, executive director of Justice Strategies, has been a national leader in trying to bring more public attention to CAR prisons. Between 2001 and 2014, Greene recalls, ​“I watched with horror” as 13 CAR prisons were built — a pace of nearly one per year.

After 9⁄11, the federal government turned its focus from drug crimes to national security. Immigration, previously treated as a civil legal matter, became criminalized. The newly formed Department of Homeland Security ramped up prosecutions for improper entry (a petty misdemeanor) and re-entry (a felony offense).

Those charged with the misdemeanor often plead guilty and are returned to their home country. If caught in the United States a second time, they can be charged with felony re-entry. As felony reentry prosecutions rose, so did the number of people incarcerated in federal prisons for immigration-related offenses, growing from 15,000 in 2001 to 20,000 to 2014.

Trump’s announcement is a reversal of the Obama administration’s effort to scale back the federal reliance on private prisons due to poor conditions. In August 2016, Deputy Attorney General Sally Yates released a memo announcing the phaseout of private prison contracts. Greene recalls ​“popping champagne corks” when hearing the news of the Yates memo. GEO Group stock prices dropped precipitously.

Private prison companies donated generously to put Trump in the White House. The GEO Group and CoreCivic, the second-largest private prison company, gave more than half a million dollars to Trump’s election campaign, plus an additional $250,000 for his inauguration party. A month after Trump took office, Attorney General Jeff Sessions rescinded the Yates memo, stating it impaired the ​“future needs” of the federal correctional system. Sessions and Trump also instituted a ​“zero tolerance” policy for border crossing, demanding that everyone arrested be prosecuted.

After Trump has taken office, stocks for private prison companies rebounded. The GEO Group recently opened a new headquarters building in Boca Raton, Florida at a cost of $57 million. In April 2017, the Justice Department issued a new round of bids for CAR prisons, and two years later announced that The GEO Group was the winner of the contracts in Baldwin, and reopening two of the three facilities at the Reeves County Detention Complex in Texas, which had been slated to be phased out by Obama.

Previously, Reeves was the largest privately-run prison in the world and named one of the top ten worst prisons in the United States by Mother Jones. In 2008 – 9, Reeves experienced a spate of five deaths, and two large riots. Incidents were sparked by the death of 32-year-old Manuel Galindo who suffered a series of epileptic seizures inside the prison. Staff responded by giving him Tylenol. ​“I already told them that I have been here for one month alone and I have gotten sick twice,” Galindo wrote to his mother just before dying. ​“I’ve already asked if they can place me with someone else so I won’t be by myself anymore.”

The BOP did not return requests for comment for this story. 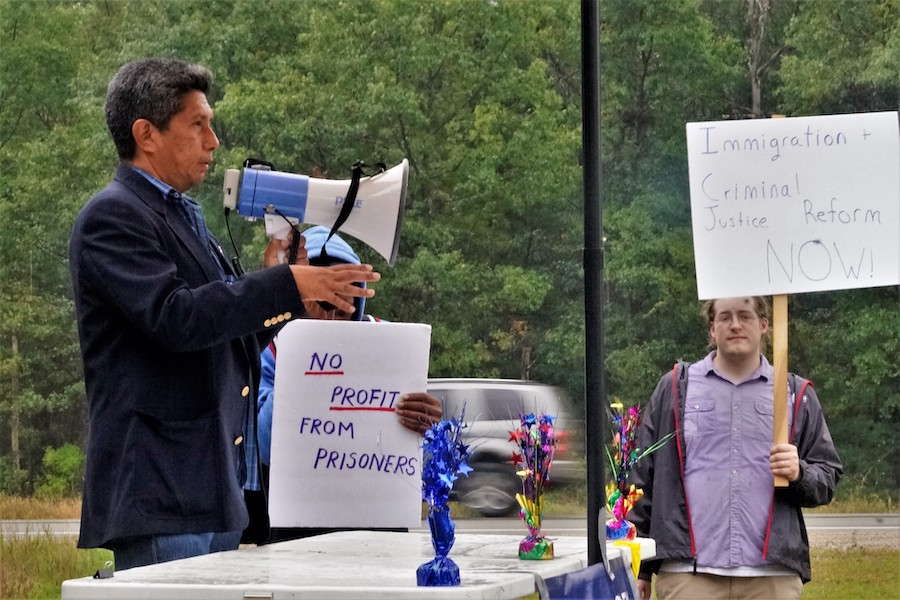 The opening of the CAR prison in Baldwin could easily have flown under the radar. Baldwin is a small town in northern Michigan with a population of approximately 1,200. Michigan state politics are Democratic-leaning because of strong union support in Detroit, but rural areas like Baldwin are Trump country.

Cam Brown, age 29, who grew up nearby, shot his first deer just outside of Baldwin. After Trump was elected, Brown started a local chapter of the of the Redneck Revolt, an anti-racist, anti-fascist group. His intention was to ​“use my skills with firearms, talk to my neighbors and prevent them from becoming more reactionary.” He travelled Charlottesville, Va., in 2017 to oppose the ​“Unite the Right” rally, where a white supremacist drove his car into a crowd of protesters. The chapter participated in several actions, including a protest of the village president of Kalkaska in Northern Michigan, who had called for the death of all Muslims, and a demonstration against an appearance by neo-Nazi Richard Spencer at Michigan State University in Lansing.

Since then, the chapter decided to leave the network and give more attention to their local community. Forming Northern Michigan Mutual Action, Brown says, ​“we still do firearms trainings, counter-recruitment work, rural outreach, and mutual aid projects.”

As Brown explains, the group changed its focus because ​“as anti-fascists and abolitionists we believe we must shut down the refugee and immigrant concentration camps and welcome these people here in our communities.” There are about 10 members working on the fight against the North Lake prison.

Baldwin is in the middle of Lake County, the poorest county in Michigan, making it the ​“perfect location” for a private prison, says Brown, because of the jobs it provides. A destination for hunting and fishing, Baldwin relies heavily on tourism. During the summer, tourists rent cottages and shop at a few stores. But even still, there aren’t many jobs available in the town.

Trained as a mason, Brown does chimney rebuilds, as well as stone and brick work. He is busy in the summer months, but during the winter jobs are ​“nonexistent,” and he is forced to collect unemployment. ​“It’s hard,” he says.

Promising about 300 new jobs, the prison was promoted as bringing economic prosperity to the region. The GEO Group (then named Wackenhut Corrections Corporation) built the North Lake Correctional Facility in 1999, originally to house juveniles. Referred to in the media as a ​“punk prison,” it was built during a panic over youth violence in Detroit and other major Michigan cities. The state pulled out of the deal in 2005 after reports of neglect. Except for brief contracts with the states of California and Vermont, the prison has mostly sat empty.

The contract with the Bureau of Prisons for the North Lake Correctional Facility allowed for ​“reactivation” of the site, as GEO Group announced in a press release. It will enable the company to make up for millions in lost revenue.

No Detention Centers in Michigan first formed in 2018 to oppose a private detention center slated for Ionia, located midway between Lansing and Grand Rapids.

The coalition ​“formed quickly,” says Laura Sager, who lives in Lansing and works as a volunteer with Justice Strategies, a national anti-immigrant-detention group that provided the coalition with support. ​“It was a true community response to the threat of a new facility.” The center was to hold between 500 and 600 detainees for ICE. The deal was brokered under then-Gov. Rick Snyder, a Republican. In 2019, when Gretchen Whitmer, a Democrat, was elected Governor, she promptly blocked the proposal.

There was little time for coalition members to celebrate. ​“The week that we found out that Gretchen Whitmer was stopping the ICE jail,” Castañeda says, the coalition got a tip about the GEO Group prison being proposed in Baldwin. ​“Next thing we know, we’re in a campaign again.”

The North Lake prison in Baldwin cannot be stopped so easily by state or local government action, as it is a privately-owned facility, and sits on private land. Still, activists are not giving up.

Duncan Tarr, a member of the Michigan coalition, says says the group is now focused on a divestment campaign to cut off ​“streams of funding” to The GEO Group. They organized a protest in August 2019 outside the head offices of Prudential Financial, one of GEO Group’s 10 largest shareholders, based in Troy, Michigan.

“Our hope is to eventually choke it and make the prison as less profitable as possible,” Castañeda says. ​“And hope that Trump is not the president in a year.”

Have thoughts or reactions to this or any other piece that you'd like to share? Send us a note with the Letter to the Editor form.
Similar articles
Feature
Noam Chomsky: The Real ‘Grave Threat’ to World Peace Isn’t Iran—It’s the U.S.
The longtime leftist intellectual on the absurdity of American opposition to the Iran deal.
Noam Chomsky
Feature
Saqib Bhatti Debunks the Inevitability of Austerity in Detroit, Chicago and Around the Country
“The entire narrative has been shaped around the fact that you have to file bankruptcy, that it’s inevitable. ... That lets a whole class of people off the hook—the people who aren’t paying their fair share.”
Lillian Osborne
Feature
Whose Race—And Gender—Is it Anyway?
Caitlyn Jenner and Rachel Dolezal trigger an important conversation.
Marilyn Katz
Join our newsletter
Fearless journalism, emailed straight to you.
Subscribe and Save 66%