It is easy to frame conservation as a clash between environmentalists and polluters. But this view can greatly oversimplify many complex choices. What does conservation look like when ideas about nature cut across political lines?

In my book, Chemical Lands: Pesticides, Aerial Spraying and Health in North America’s Grasslands since 1945, I explore how pilots, scientists and farmers developed practices for ​“cropdusting” on the Great Plains after World War II. This industry took shape years before Rachel Carson published Silent Spring, a sweeping critique of widespread use of synthetic pesticides, in 1962.

Chemical companies made broad promises about these ​“miracle” products, with little discussion of risks. But pilots and scientists took a much more cautious approach. Well before a national environmental movement emerged, local producers developed their own ways to study safety and health questions as early as the 1950s. If protecting agricultural health here meant using pesticides to meet production goals, they wanted to understand the risks too.

After World War II, U.S. farmers began using new chemicals, many developed during the war, to fight pests. Grasslands weeds like musk thistle and field bindweed, and insects like corn borers, threatened production lands as markets were expanding during the postwar economic boom.

Farm poisons seemed like a ​“silver bullet” response. Just as insecticides like DDT had protected Allied soldiers against diseases such as typhus fever, they could protect fields at home, companies like DuPont and Dow told farmers in advertisements, trade journals and in-person sales.

But cropdusting pilots, known as ​“ag pilots,” and land-grant agricultural scientists didn’t all buy this message. They worried that using pesticides might be just as dangerous as not using them. In search of answers, they attended annual conferences held at universities and rural convention centers. At meetings like the North Central Weed Control Conference, which took place annually starting in 1944, ag pilots and farmers could learn about new advances and debate current practices. Records of these meetings show a kind of ​“chemical stewardship” developing on the Plains. 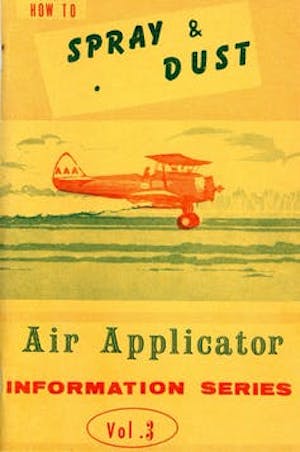 Potential for good or harm

Many farmers and experts were well aware of how little they really knew about pesticide and herbicide impacts. University of Nebraska agricultural extension scientist Noel Hanson cautioned in his plenary speech at the 1947 NCWCC meeting in Topeka, Kansas, about the promise of agricultural chemicals:

We all know that it will take years of research, education, regulation, manufacture, distribution of materials, and plain good farming in a sound agriculture and industry before the weeds that are now present can be most efficiently and economically brought under control. Little progress can be made until the biological foundations … are better known.

Reporter Dick Mann observed in the Kansas Farmer that wheat farmers also worried about the new pesticides and potential impacts of aerial spraying:

These chemicals compare with some of the new miracle drugs in medicine. They have the power for tremendous good, but they also have the power for great harm if improperly used. … With this information as background you can see that many persons are deeply concerned over the possibilities of this thing getting out of hand.

In Hays, Kansas, pilot Donald E. Pratt — known as the ​“Spray King of the West” — established the P‑T Air Service, an aerial spraying school that combined spraying education with agricultural science. Pratt had his pilots learn as much as they could about the newest pest control chemicals on the market. His crew met with state entomologists and weed scientists to better understand crop-pest interactions. Then Pratt conducted his own experiments on private test plots to assess effectiveness and hazards. Many Great Plains pilots ran flight schools similar to Pratt’s.

Nonetheless, some operators cut corners. Renegade pilots failed to pay attention to wind direction for target fields. In my archival research, I found that their haphazardness resulted in many chemical poisonings in fields and communities.

Some suppliers developed a process called ​“incorporating” — mixing two or three different pesticides together, then repackaging the adulterated poison and mislabeling it as an entirely different chemical. These products either over-poisoned farmers’ fields or had virtually no effect on pests. They also threatened ag pilots’ professional reputations. 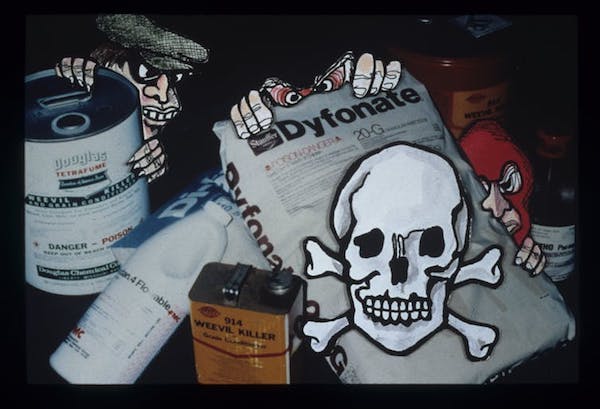 Although today’s poisons are more dangerous than any known before, they have amazingly become something to be showered down indiscriminately from the skies. Not only the target insect or plant, but anything human and nonhuman within range of the chemical fallout has known the sinister touch of the poison.

For Carson, health encompassed humans, wildlife and the environment in a holistic way. She implicated producers and the chemicals they used in endangering all living things. Farmers, ranchers, cattle, crops, water supplies and cities were all at risk. Silent Springsparked calls for regulation in the 1960s and 1970s, culminating in the creation of the Environmental Protection Agency in 1970 and the banning of DDT in 1972.

Many ag pilots pushed back, claiming they had already developed practical methods to minimize risks. Pesticides were dangerous, but so were pests. Protection and safety on farmlands meant ​“safe,” ​“standardized” agricultural chemical use. 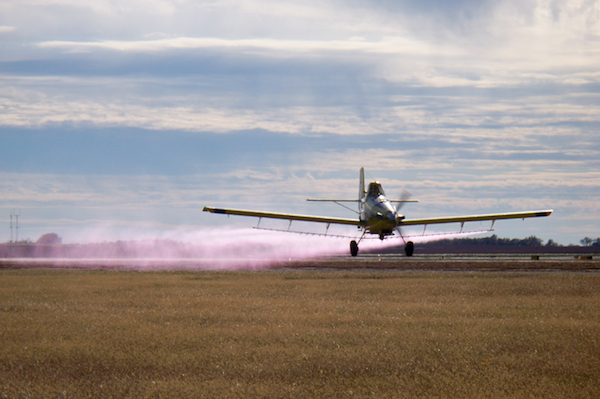 Still on the treadmill

After DDT was banned, new and more toxic alternatives succeeded it — first organophosphates, and more recently, neonicotinoids. But insect pests and weeds have developed resistance to each new generation of products. Today many farmers are contending with weeds that have developed resistance to the widely used herbicide glyphosate — the latest step on this chemical-pest treadmill.

Farm chemicals remain a key part of conventional agriculture, and aerial spraying is still a central practice for most large-scale farms on the Great Plains. Many pilots and farmers still pursue chemical stewardship, using GPS technologies to apply pesticides precisely and use no more than needed.

But as cheap chemical solutions lose their potency, agricultural extension programs increasingly are recommending approaches that include non-chemical tactics, like crop diversity and planting practices that inhibit weed growth. These seemingly contrasting views — using chemicals to control pests while seeking to minimize environmental damage — reflect the nuanced attitudes many Great Plains farmers and pilots have long held toward pesticides and herbicides.

(​“Farmers and cropdusting pilots on the Great Plains worried about pesticide risks before ​‘Silent Spring’” was first published on The Conversation and is reposted on Rural America In These Times under a Creative Commons license.)

Check out the options
David Vail is an assistant professor of history at University of Nebraska Kearney. He grew up in Southern Oregon’s Rogue Valley and spent much of his youth exploring the state’s mountains and wilderness areas. He holds a BA from Southern Oregon University, an MA from Utah State University, and a PhD from Kansas State University.
Have thoughts or reactions to this or any other piece that you'd like to share? Send us a note with the Letter to the Editor form.
Similar articles
Rural America
“It Tears You Apart Mentally and Physically”: The Health Crisis Afflicting Black Farmers
Farming is a stressful occupation. Black farmers face the additional burdens of racism, debt and fear of displacement.
Safiya Charles
Rural America
The Unopen Range: How Fences Hurt Wild Animals
In the Western United States alone, 620,000 miles of fence carve up the land. These barriers threaten the migrations of pronghorn, mule deer and other species.
Tara Lohan
Rural America
“This Is Why We Don’t Drink the Water”
Fracking threatens drinking water on the Fort Berthold Indian Reservation in North Dakota. Meet the locals who are fighting back.
Elena Bruess
Join our newsletter
Fearless journalism, emailed straight to you.
Subscribe and Save 66%