Afghan Refugees Rise Up Across Europe

Against the threat of deportation, refugees from Athens to Vienna are standing up for their rights.

“In Afghanistan, the Taliban or Daesh kill me once, but here in Greece I am being killed every day.”

In early August, hundreds of Afghan unaccompanied minors in Stockholm held a sit-in outside the parliament building, demanding an end to deportations.

–An Afghan refugee living in a camp outside Athens

ATHENS, GREECE — Afghan refugees across Europe are organizing demonstrations against the deportation policies of the European Union. In particular, they are demanding their rights under international law, which are continuously being violated by two 2016 deals: the Joint Way Forward agreement between the EU and the Islamic Republic of Afghanistan, and the EU-Turkey agreement.

The EU-Afghanistan Joint Way Forward Agreement (JWF), signed Oct. 2, 2016, allows EU member states to deport an unlimited number of Afghan asylum seekers by classifying them as economic migrants rather than refugees, and obliges the Afghan government to receive them. Thanks to a leaked memo, it is widely known to have been a backroom deal that Afghanistan was forced to accept in order to receive humanitarian aid. The agreement has been criticized by the Afghan parliament as well as human rights groups, and rests on the false assumption that Afghanistan is safe to deport people to, when all recent reports indicate an alarming rate of violence.

The March 2016 EU-Turkey Deal allows Greece to deport refugees to Turkey, ignoring that Turkey is also not a safe country for refugees to be deported to: According to Turkish law only Europeans can claim asylum under the 1951 Refugee Convention. Thus, the deportation of refugees to Turkey leaves them in extremely vulnerable positions that can lead to their abuse by traffickers and others. In exchange for the agreement, Turkey is to receive billions of euros in aid, visa-free travel through the EU for Turkish citizens and revived negotiations for Turkish accession to the EU. Often, the people deported back to Turkey are held in detention centers built using EU money. They are forced to live in deplorable conditions while detained, often ending in their deportation back to their countries of origin.

Faced with the threat of deportations, on August 22 more than 100 Afghan refugees and allies marched and rallied in Athens. People chanted in Dari, English and Greek, calling for an end to deportations and for open borders. People marched with hand-painted banners, reading, in reference to the JWF agreement, ​“Afghanistan is Not Safe,” and ​“War Refugees, Not Economic Migrants.” The unified message was clear: Stop the detention and deportation of Afghan asylum seekers back to Afghanistan. 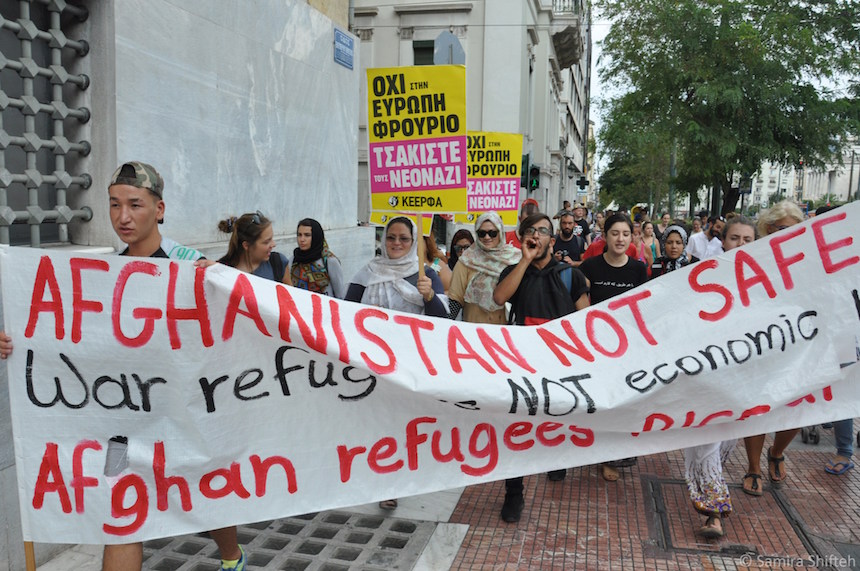 Afghan refugees and advocates march in Athens on August 22. The signs in Greek read ​“No to fortress Europe.” (Samira Shifteh)

Refugees came to the August 22 action from two government-run refugee camps, Schisto and Eleonas, as well as the Athens solidarity squat City Plaza, run by activists. Residents of Malakasa Camp attempted to attend the action, but allege they faced political repression by officials with the International Organization for Migration (IOM) who threatened to withhold supplies (such as clothing) if they boarded the buses to the protest. Residents at Schisto camp tell us they also faced repression by International Rescue Committee (IRC) officials, who, they allege, attempted to prevent refugees from leaving the camp.

We were there as well, as part of a recent delegation to Greece, through the War Resisters League, a U.S.-based anti-war organization. Our delegation came together as eight activists from the Syrian, Iraqi, Yemeni, Afghan, Iranian and Pakistani diasporas living in the United States and Canada.

During our time in Athens we connected with many Afghan refugees and participated in community meetings hearing their concerns. With their leadership, and help from members of the Afghan diaspora inside and outside of Greece, we drafted a letter of their demands, and supported a political action to deliver the letter to the EU and the Greek Ministry of Migration and Policy.

The Afghan refugee community read aloud these demands in front of the Ministry of Migration and Policy, before marching to the offices of the European Commission of Greece to do the same. Demands included a moratorium on all deportations and the cancellation of the EU-Turkey Deal and the JWF. The letter also called for Afghan refugees to be designated as refugees fleeing war and generalized violence, and called for timely family reunification transfers with loved ones elsewhere across Europe.

Less than a week later, on August 28, around 50 Afghan refugees from Moria refugee camp marched from the camp into Sappho Square, the heart of Mytilene city, Lesvos. The decision to protest outside the camp in the city center was intended not only to gain media attention but also to avoid violent police repression recently met by protestors at the camp that resulted in the arrests of 35 refugees. Citing inspiration from the recent victorious hunger strike led by refugees in Moria’s Section B detention center, the protesters claimed they would not leave until their demands were met. Men protesting had handwritten messages on their T-shirts with the date they arrived to Moria to show how long they have been trapped on the island, unable to travel to the mainland and waiting for decisions on their asylum cases. Many have been there over a year, with no updates on their status. During the action, people remained camped out overnight in Sappho Square. Many experienced harassment from the Greek police as well as violence from an off-duty Moria guard. After three days the Greek authorities responded with claims that the people’s asylum decisions would be issued by the end of the week; protesters disassembled but vowed to be back if their demands were unmet. As we write this, they are still waiting for an official response on their asylum cases.

The protests in Greece were part of a greater movement of Afghan refugees protesting their deportations across Europe. In early August, hundreds of Afghan unaccompanied minors in Stockholm held a sit-in outside the parliament building, demanding an end to deportations. In an open letter to Swedish Migration Agency, Migrationsverket, youth wrote about their concerns for their safety if they were returned to Afghanistan. The group was attacked by fascists one day into their protest, and after little police intervention, they moved their action to another site, where they remained for nearly two weeks, and were joined by many Swedish supporters showing their solidarity.

Also joining the call to action, over 100 Afghan refugees protested in Vienna, at Votivpark, from August 25 to 28. Protesters also drafted an official letter of demands for their asylum rights that reads similarly to the Athens letter. Addressed to the EU, the United Nations High Commissioner for Refugees, and the Prime Minister of Austria, the letter includes a call for an end to deportations, the immediate reconsideration and revaluation of rejected asylum cases, and legal support and qualified interpreters for interviews and appeals.

On August 31, Franz-Michael Mellbin permanently closed the office he held, the EU Special Representative for Afghanistan, after 16 years of operation. He ended his last report with ​“Long Live Europe!” leaving many to speculate how this will affect diplomatic relations and policy.

Afghans have been fleeing Afghanistan for many years now in search of safety due to deteriorating security there, and a lack of essential government support. The civilian population is continuously under threat of violence from the Taliban, Daesh, warlords, the United States and NATO military occupation and warfare. And with President Trump’s recent announcement that he would be sending thousands more military troops to Afghanistan, the longest U.S. war has no end in sight. Afghan refugees arriving in Greece after a long and dangerous migration face ongoing insecurity with inadequate access to shelter, health services, education and employment, as well as vulnerability to drug and sex trafficking. The population is also at high risk of deportations as a result of the false classification by the EU of Afghanistan as a ​“safe” country and as ​“post-conflict,” meaning that Afghan refugees are not considered war refugees.

The European Union and Ministry of Migration and Policy must recognize that the EU-Turkey deal is a violation of international law. Once a person arrives at a nation’s borders exercising their right to seek asylum under the 1951 Refugee Convention, they cannot be turned away or detained. The principle of non-refoulement, which is enshrined in the Refugee Convention, forbids the return or deportation of asylum seekers to their countries of origin or last habitual residence. The EU-Turkey deal and the JWF allow for exactly this type of illegal deportation to occur. The EU and other relevant parties have also continuously violated these rights of Afghan refugee communities through long assessment processes, which take years, or through restriction of movement with refugees stuck languishing in camps and detention centers. Therefore, it was inevitable that the Afghan refugee community would rightfully take matters into their own hands and rise up against such injustices.

As activists in the diaspora, we will continue to follow the strong leadership of Afghan refugee activists, and we will continue to raise their demands to the international community, as we strengthen transnational solidarity in the movement for refugee rights. We call on the international anti-war movement to heed the call of refugees, and lend your voice and resources to support their struggle and vision.

Samira Shifteh is an Iranian-American activist based in Seattle, who has been working on immigrant and refugee rights for well over a decade, from supporting survivors of intimate partner/​family violence to organizing actions against deportations and detention centers. Suraia Sahar is an Afghan-Canadian activist based in Toronto studying international development at York University. Urooj Rahman is a Pakistani-American activist and lawyer from Brooklyn, N.Y., who has worked directly with refugees and asylum seekers as a legal advisor while living in Istanbul. Presently she is the policy coordinator for Bob Gangi’s mayoral campaign.
Have thoughts or reactions to this or any other piece that you'd like to share? Send us a note with the Letter to the Editor form.
Similar articles
Feature
This Father’s Day, Recognizing the Dads Who Are Left Out, Locked Up and Fighting for Their Families
For dads in the crosshairs of systemic oppression, the work of parenting often goes underappreciated.
Brooke Anderson
Feature
Incredible Credibility
Richard Clarke’s decision to step out publicly and write Against All Enemies is more shocking than the revelations within
Jason Vest
Feature
The Maturing Movement Against Sweatshops
Mischa Gaus
Join our newsletter
Fearless journalism, emailed straight to you.
Subscribe and Save 66%