The Centrality of Seed: Building Agricultural Resilience Through Plant Breeding

The five global issues most frequently debated today are: the decline of biodiversity (agrobiodiversity in particular), climate change, hunger and malnutrition, poverty and water. Seed is central to all five issues. The way in which seed is produced has been arguably their major cause. But it can also be their solution.

During the millennia before modern plant breeding began farmers were moving around with seeds and livestock, and because neither were uniform they could gradually adapt to different climates, soils and uses. Whenever farmers settled, they continued to improve crops and livestock. In the case of crops, the way they did it, which can still be seen today in a number of countries, consists of selecting the best plants to provide the seed to be used for the following season. This process was highly location-specific in the sense that each farmer did it independently from other farmers and for his/​her conditions of soil, climate and uses. The enormous diversity of what we call ancient, old, heirloom varieties originated through this process.

The term ​“Green Revolution” is used to indicate an agriculture development strategy based on the use of new varieties, in conjunction with the use of fertilizers, pesticides, irrigation water and mechanization. It is now increasingly recognized that the short-term achievements of the Green Revolution had long-term penalties. One was the reduction in food diversity with negative consequence on human health. Another was the leaching into the ground water of fertilizers due to overuse, but they also included water shortages, the emergence of pesticide resistance, the increase in populations of harmful insects and the bypassing of farmers in marginal areas.

GMOs, the latest addition to the industrial ​“toolbox,” are a short-term and unstable solution to these problems because they change the environment surrounding the organisms they intend to control. Thus, as predicted by a fundamental biological principle, namely the Fundamental Theorem of Natural Selection, their use induces resistance. It is the same process by which bacteria evolve resistance to antibiotics, a phenomenon that is the cause of diseases affecting yearly two million Americans and causing 23,000 deaths in the United States. At best, GMOs can only be a short-term solution to any particular problem, but in every case they have created an often more serious problem (resistant weeds, insects or disease) that requires a new GMO and/​or more chemical use. They also make a farmer completely dependent on the company producing the GMOs and chemicals.

Agroecological models of agriculture, such as organic agriculture, could be solutions to the most important problems affecting the planet, but they are often criticized for not being able to produce enough food for a growing population. We believe, however, that most of the meta-analysis showing lower yields under organic conditions are biased by the use of varieties which were not selected specifically for organic conditions.

Participatory and evolutionary plant breeding methods reconcile increased production of more readily available and accessible food with increased agrobiodiversity. They also maintain the evolutionary potential of our crops, which is needed to cope with climate change. Being based on selection for specific adaptation, participatory plant breeding is not only more efficient than conventional plant breeding, but is able to produce varieties specifically adapted to both an agroecological agricultural model and diverse local climates. Thereby food safety is reconciled with food security. 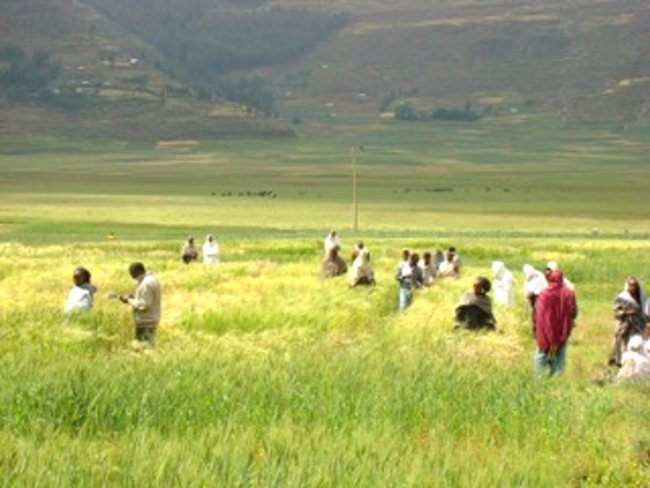 An example that this is indeed possible at low cost and in a short period of time is the following three year project of participatory tomato breeding in organic conditions.

Each farmer grew a random sample of 72 individual F2 plants for each of the four crosses, together with 18 individual plants of a commercial F1 hybrid of the corresponding fruit type for a total of 360 plants (4 crosses x 90 plants). The four populations were also planted at the research station.

After statistical analysis, seed was extracted from the fruits of the best plants and the corresponding F3 families (8 plants per family) were grown together with the same commercial hybrid as in the first year. During the process the F3 seed of the selected F2 of the ​“green salad” population was lost because of poor seed germination.

Selection was repeated with the same methodology and the best plants were used to obtain the seed of the F4 families of the three remaining crosses. These were compared with commercial hybrids in a replicated (3 replications) trial on the four farms and at the research station. The trials on farms had some lines in common (selected in more than one farm) but also the unique selections on that farm.

To assess yield, we measured the production of the first three fruit clusters. These are both very vulnerable to late frosts and very valuable to the farmers for the high prices of an early season tomato. It is thus a key commercial trait for farmers.

Part of the evaluation was a score for uniformity and none of these lines was phenotypically less uniform than the hybrid. This means that they can be immediately commercialized, thus capitalizing on the work done. The lines still conserve some genetic diversity, which allows farmers to continue to improve them by extracting seeds from the best fruits of the best plants. The three advantages farmers derived from this work are 1) higher yielding varieties; 2) saving on purchased seed as they can produce their own, and 3) using varieties specifically adapted to organic conditions.

An interesting alternative is offered by evolutionary (participatory) plant breeding — participatory is in parenthesis because, though desirable, the participation of an Institution is not indispensable. The idea is not new as it was proposed by Colt A. Suneson in 1956. The method consists in planting in farmers’ fields with mixtures (evolutionary populations) of very many different genotypes of the same crop, preferably, but not necessarily, using early segregating generations. These populations will be planted and harvested year after year, and due to natural crossing (higher in cross-pollinated and less in self-pollinated crops), the genetic composition of the seed that is harvested is never the same as the genetic composition of the seed that was planted. In other words, the population evolves to become progressively better adapted to the environment (soil type, soil fertility, agronomic practices including organic systems, rainfall, temperature, etc.) in which it is grown. As the climatic conditions vary from one year to the next, the genetic makeup of the population will fluctuate, but if the tendency is towards hotter and drier climatic conditions, as expected in view of climate change, the genotypes better adapted to those conditions will gradually become more frequent in this farming/​breeding system. 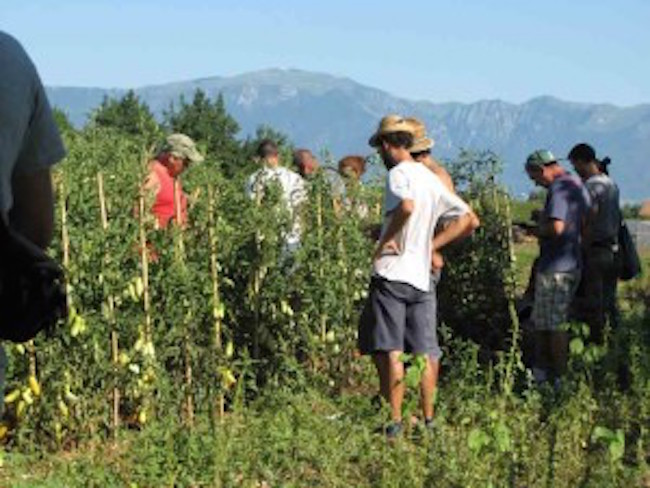 The evolutionary population, which can be made by the farmers themselves by buying seed of as many different varieties (including hybrids) of a given crop, can be used by the farmers (and by researchers if they are willing to participate) as a source of genetic diversity from which to select plants with useful traits.

This has been done in Italy using a zucchini (summer squash) evolutionary population obtained by letting 11 commercial hybrids to freely intercross. After only two cycles of visual selection, as in the case of tomato, the farmer in question selected two varieties, differing in color, yielding as much as the commercial hybrids. He has already started selling the two new varieties in local markets.

Thus evolutionary (participatory) plant breeding, being a relatively inexpensive and highly dynamic strategy to adapt crops to a number of combinations of both abiotic and biotic stresses and to organic agriculture, seems to be a suitable method to generate, directly in farmers’ hands, the varieties that will feed the current and future populations. Combining seed saving with evolution and returning control of seed production to the hands of farmers, it can produce better and more diversified varieties. These can help millions of farmers to reduce their dependence on external inputs and their vulnerability to disease, insects and climate change and ultimately contribute to food security and food safety for all.

(A version of this article appeared on inde​pen​dentscience​news​.org.)

Formerly a professor in agricultural genetics at the University of Perugia, Italy, Salvatore Ceccarelli has been associated with the International Center for Agricultural Research in the Dry Areas (ICARDA) since 1980.
Have thoughts or reactions to this or any other piece that you'd like to share? Send us a note with the Letter to the Editor form.
Similar articles
Rural America
Rural Areas Struggle to Compete for Nurses as They Face Dire Shortages
Covid has overwhelmed hospitals, prompting many overburdened nurses to change careers or retire early. The shortages have hit rural areas particularly hard.
Aallyah Wright
Rural America
Towns Across the West Face a Housing Crisis. More Sprawl Is Not the Answer.
The lack of affordable shelter in the region has dramatic economic and public health repercussions. Some places are working to solve the problem by building more densely.
Jake Bullinger
Rural America
‘People Are Still Putting Their Bodies on the Line to Stop this Pipeline’
A court found that the Dakota Access Pipeline was built unlawfully. These water protectors are still in prison for trying to stop it.
Joseph Bullington
Join our newsletter
Fearless journalism, emailed straight to you.
Subscribe and Save 66%