My County is Poor and Remote. Fracking Companies Think They Can Abuse It.

My southeastern Ohio town in the Appalachian foothills is a small, rural place where the demolition derby is a hot ticket, Walmart is the biggest store, and people in the surrounding villages must often drive for 30 minutes to grocery shop.

Athens holds the unfortunate distinction of being the poorest county in the state: an area that is both stunning — with rolling hills, rocky cliffs, pastures, and ravines — and inaccessible, far from industry.

It’s here, at the Hazel Ginsburg well in Alexander Township, that fracking companies dump their waste. Trucks ship that sludge of toxic chemicals and undrinkable water across the country and inject it into my county’s forgotten ground.

My step-grandmother, the daughter of a Kentucky miner, used to tell me stories of washing her clothes in polluted red water, downstream from mines. Coal companies exploited employees like her father, paying him in company scrip and keeping him poor and exploiting the land.

That kind of abuse continues. It’s just changed shape. The Ginsburg well has a long history of violations, so many that the Ohio Department of Natural Resources ordered it shut.

It’s a pit well, which looks like an old swimming pool, covered by a tarp. No sign indicates the presence of chemicals, just a ​“no trespassing” sign. Allegedly, a guard will snap your picture if you stop or turn your car around. The well is located in a residential area, with houses — some with swing sets — just down the road. 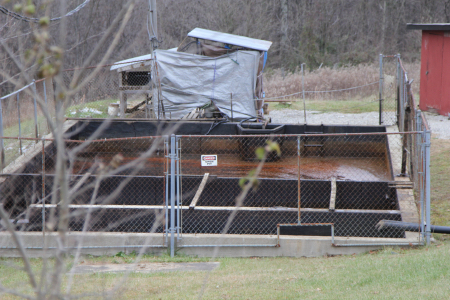 The frack waste storage pit of the Hazel Ginsburg well near Albany, Ohio. Note the makeshift shack behind the pit. (Image: slow​down​frack​ing​.word​press​.com)

In 2012, Madeline ffitch (whose last name is spelled lowercase and with the double ff) was arrested there. Her arrest was part of an action by a local anti-fracking group, Appalachia Resist. The then 31-year-old’s arms were locked into cement-filled plastic drums just before the gates, blocking the entrance.

Two years later, Christine Hughes, co-founder of the local Village Bakery, was arrested protesting against another well site, as were seven others. My town called them ​“the Athens 8” and they were hailed as heroes.

Ffitch and her young family continue to protest wells, despite the attempts of the fracking industry to, according to her, ​“paint anyone who is organizing resistance around this stuff as outsiders or extremists.” Her husband, Peter Gibbons-Ballew, was arrested in a peaceful protest in 2016, while ffitch watched, their baby strapped to her chest.

Our local economy now depends on tourism and farming. The long, humid growing season makes this part of Appalachia ideal for wild specialties such as pawpaws, black walnuts and mushrooms. And many hunters stay here to be near our famous bucks.

By contaminating the environment, fracking wastewater wells threaten all these businesses. In 2015, tank trucks injected 4 million barrels of waste into my small county alone.

It’s hard to get answers about what is in that waste. But Jason Tremby, an engineering professor at Ohio University, is leading a local team to ​“clean” fracking wastewater using ultraviolet light, water softening techniques, and a high pressure reactor.

It makes sense to me that a solution to the wells might come not from outside, but from people like ffitch, Hughes, and Trembly, working and living in Appalachia. People are used to doing things for themselves here — and used to the community helping the community.

I keep hoping more will be done to protect this place. ​“You want to forget it,” begins the Appalachian-born Ruth Stone’s poem ​“Garbage.” But the fracking waste in the injection wells of Appalachia can’t be forgotten forever.

It’ll bubble up, one way or another, before long.

(​“America Dumps Its Fracking Waste in My Ohio Town” was originally published on Oth​er​Words​.org under a Creative Commons license. It was adapted from a larger story, commissioned by the Economic Hardship Reporting Project, that appeared in the Guardian.)

Alison Stine is a writer, visual artist and author. She is a writing fellow for the Center for Community Change. Her work has appeared in The Atlantic, The Nation, The Paris Review and Jezebel.
Have thoughts or reactions to this or any other piece that you'd like to share? Send us a note with the Letter to the Editor form.
Similar articles
Rural America
Meet the Appalachian Women Facing Down the Mountain Valley Pipeline
Across years and several southern states, these organizers have helped drive the massive gas pipeline to the brink of defeat.
Ben Bolling
Rural America
In North Carolina’s Tobacco Fields, Guest Workers Battle the “Green Monster”
The state’s tobacco harvest increasingly relies on guest workers, who face nicotine poisoning and what advocates say are inadequate labor protections.
Da Yeon Eom
Rural America
Here’s How Biden Could Help Fix the Rural Healthcare Crisis
Since long before Covid, rural health has suffered from federal misunderstanding and neglect.
Lauren Hughes and Sameer Vohra
Join our newsletter
Fearless journalism, emailed straight to you.
Subscribe and Save 59%