The Democratic primary candidacy of Senator Bernie Sanders (I‑VT) for president of the United States provides progressive labor activists with a unique opportunity to enhance the independent political capacity of a besieged labor movement. Reflecting his political roots in the American socialist movement, Sanders is the most consistently pro-labor member of the United States Congress. Just this Friday he walked the picket line in Cedar Rapids, Iowa, where workers are protesting the anti-union practices of the new owners of Penford Products, a potato starch manufacture.

This past Labor Day, tens of thousands of labor activists and their allies participated in labor marches and picnics across the country in favor of Sanders’ candidacy. But except for endorsements from several progressive local trade unions, the South Carolina Central Labor Council, and the militant 200,000 member National Nurses Union, most established labor leaders have been silent about the Sanders candidacy or have endorsed his establishment opponent, former Secretary of State Hillary Clinton. This despite Clinton’s roots in the neoliberal wing of the Democratic Party, which is financially backed by Wall Street and has long fought to diminish labor’s influence in the Democratic coalition. 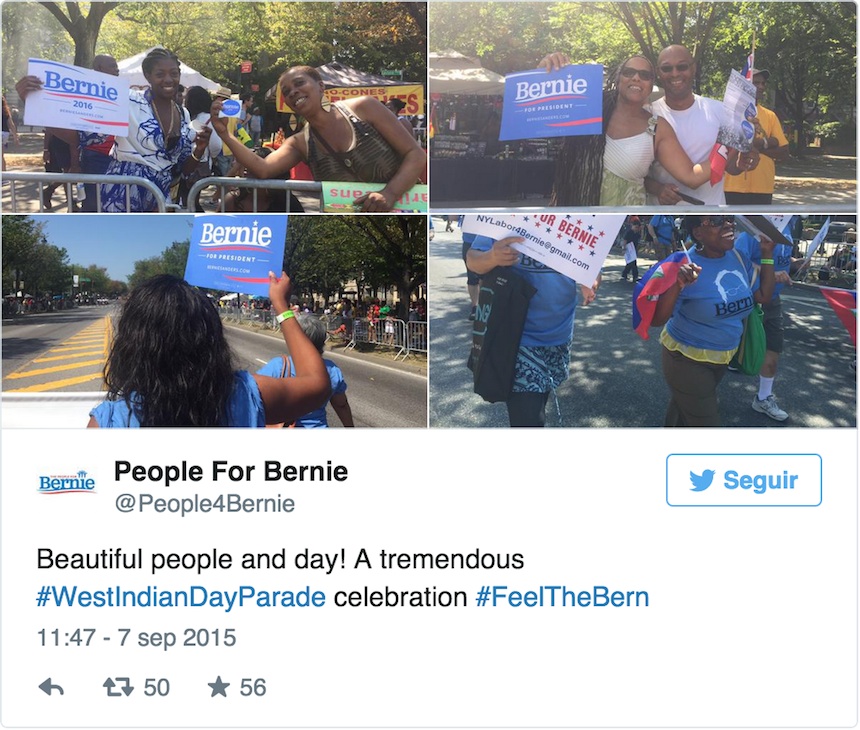 The Sanders effort is the most explicit pro-working class major campaign for president since Jesse Jackson’s Rainbow Coalition 1988 presidential run. His campaign insists that working people must fight back against the unceasing class war waged by corporate elites over the past forty years. Indeed, Sanders is so focused on class injustice that he had to be pushed by #BlackLivesMatter activists to explicitly address racial justice issues, such as mass incarceration and police brutality. He has now done so in a recent major addition to his campaign platform.

Sanders’ platform differentiates him clearly from the centrist, pro-corporate candidacy of Hillary Clinton. Sanders supports raising the minimum wage to $15 an hour; opposes ​“free trade” agreements that empower corporations while weakening labor rights and state regulation of corporate behavior; and supports a ​“Medicare for All” healthcare system that would abolish the private health insurance sector. In contrast, Hillary Clinton has refused to embrace any of these positions.

Backing a radical pro-labor candidate in a Democratic primary would enable the labor movement to express its disgruntlement with the pro-corporate national Democratic Party establishment in a way that would be less risky than backing a third party candidate in the general election. Not just established trade union leaders, but many rank-and-file activists are reluctant to support third party candidates in general elections out of fear that they may elect Republican governments. In the twenty-five states where Republicans control all three branches of government, they have severely eroded basic labor, reproductive, and voting rights. Simultaneous Republican control of the presidency, Senate and House, and Supreme Court could yield a national version of these reactionary state governments.

But this unswerving loyalty to all Democratic incumbents out of fear of Republican victory has enabled the pro-corporate national party leadership to capture and abuse its electoral base. Until the trade union, Black and Latino, and progressive base consistently run primary candidates against pro-corporate Democratic elected officials, the party leadership will continue to disregard the needs of its core constituencies. And grassroots union activists will have to play a major role in creating this ​“progressive party within a party,” starting with their efforts to build institutional labor support for the Sanders campaign. That’s why over 12,000 active trade unionists have already joined ​“Labor for Bernie,” which is working to secure labor support for Sanders at both the local and national levels.

In addition to the active participation of the National Nurses Union in the Sanders campaign, the executive council of the United Electrical Workers and the presidents of the Amalgamated Transit Workers and American Postal Workers Union have urged their members to take a close look at the Sanders candidacy. Larry Cohen, the recently retired national president of the Communications Worker of American (CWA), volunteers full-time for the Sanders campaign and it is possible that this major, politically active union might endorse Sanders. If Sanders could gain the support of the influential Nevada Culinary Workers branch of the national Hotel Employee and Restaurant Employees Union (HERE), he would radically enhance his base among the 40 percent of Nevada Democratic caucus goers who are Latino. But on the national level, the major central labor federation, the AFL-CIO, has urged its union affiliates to hold off on presidential endorsements, in part to forestall a grassroots push to endorse Sanders, but also to give Sanders time to push Clinton in a more pro-labor direction. 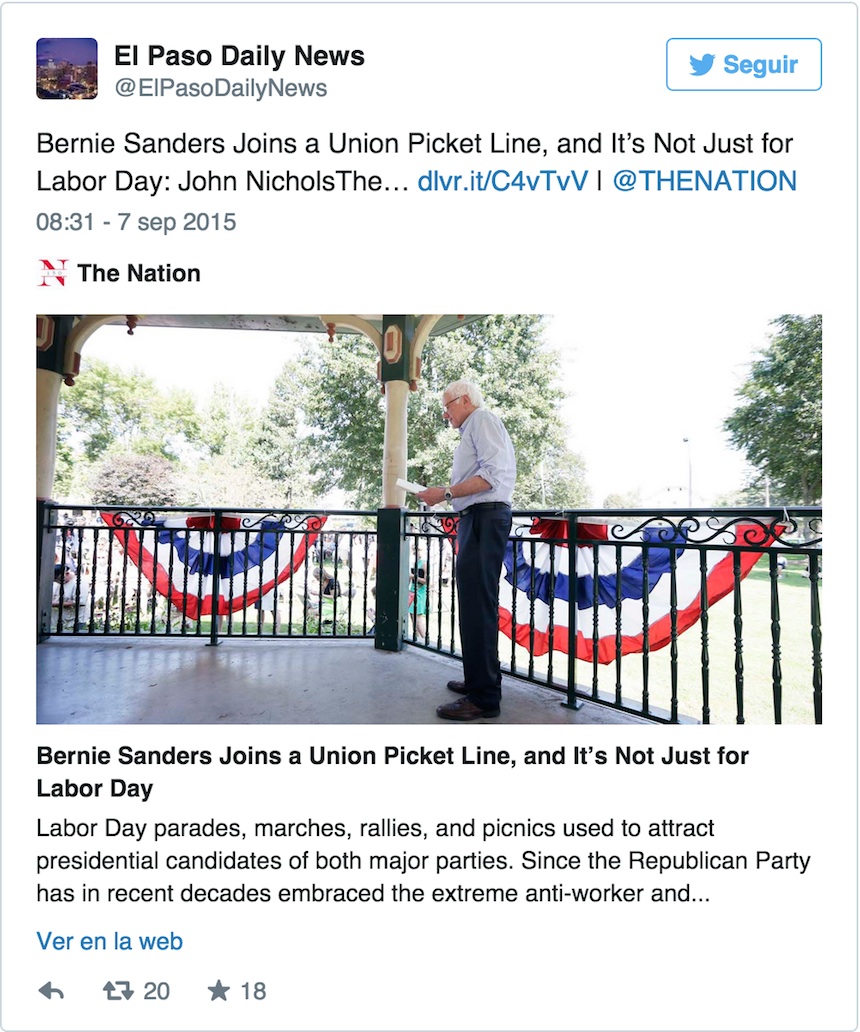 Most established trade union leaders have either not endorsed a presidential candidate or, as in the case of the American Federation of Teachers union and the Machinists Union, endorsed Hillary Clinton. This has led, particularly in the American Federation of Teachers, to protest by Sanders supporters that the leadership failed to consult the membership in a democratic manner. And rank-and-file activists in the powerful two million member Service Employees Union are working to stop an early Clinton endorsement. Politically ambitious labor leaders have long believed that backing the likely general election candidate early gains them greater access and influence to the halls of power, but the evidence proves otherwise. The unions that backed President Obama early in the 2008 elections did not see a return on their investment. Despite labor ground troops playing a key role in winning swing states for Obama, Obama refused to risk the ire of corporate America in 2009 and failed to aggressively shepherd through Congress legislation aimed at shifting U.S. labor law in a pro-union direction. Obama did not have to worry about the exit of labor and voters of color from the Democratic electoral base. But if local coalitions of labor, Black, Latino and left Democrats were to develop the capacity to defeat pro-corporate Democrats in Democratic primaries, the base could no longer be taken for granted by establishment elected officials.

The major increases in business lobbying, campaign contributions, and think-tank funding that began in the 1970s has moved the pendulum of US politics to the right, particularly on socio-economic policy issues. On the other hand, the demise of northern moderate Republicans (who often backed labor and reproductive rights) and the switch of conservative white Southern Democrats to the Republican Party means that there are greater differences in policy preferences between the two parties than ever. Only 28 House Democrats voted in favor of the Trans-Pacific Partnership (versus 100 Democrats who backed the North American Free trade Agreement in 1994), whereas over 200 Republicans did. All 188 House Democrats recently voted to raise the minimum wage to $10.10 an hour recently, whereas only 4 of 246 Republicans did so. That’s why it does matter for working people and the poor which party controls the state. The problem remains that the center of American politics is more pro-corporate than at any time since the Gilded Age.

And while the Obama administration has been relatively acquiescent to Wall Street on the legislative front, it has used its executive and administrative powers to aid working people. The radically different nature of the electoral base of the two parties does yield some major differences in how each party governs. Progressive appointments to the National Labor Relations Board have led to decisions that enhance the labor rights of franchise workers and could possibly curtail corporations’ practices of outsourcing work to low-wage ​“independent contractors” who violate labor rights. The administration’s executive orders have forced government contractors to pay a minimum wage of $10.10 an hour (versus the $7.25 that the Republican-controlled Congress refuses to raise) and a recent executive order increased the number of employees covered by overtime pay requirements from 20 million to 50 million.

If the Sanders campaign aims to win the nomination, it must work 24⁄7 to expand its base beyond predominantly white, college-educated, self-defined progressive voters to voters of color and non-college-educated whites. Sanders’ recently-issued racial justice agenda should help in this matter, as will radical African-American publican intellectual Cornel West’s active campaigning for Sanders. But the campaign has to prioritize the building of local coalitions led by activists of color and trade unionists (40 percent of whom are people of color). The campaign must also prioritize feminist voters, most of whom currently back Clinton. Clinton’s superior name recognition and she and her husband’s popularity with Black and Latino political elites mean she currently outpolls Sanders overwhelmingly among likely Democratic primary voters of color. Sanders refuses to engage in personal attacks against Clinton, but he should speak out strongly against the devastating effects that President Bill Clinton’s ​“welfare reform” and federal criminal justice policies had on the poor in general, and low-income people of color in particular.

Thus, local Sanders campaigns have to work to build political coalitions with strong roots in working class communities and communities of color that aim to last well beyond Sanders’ national campaign. If they do, then grassroots progressive activists can engage in local versions of the Sanders’ effort — insurgent Democratic primary campaigns against pro-corporate Democrats — long after the Sanders campaign is over. These coalitions could also back independent and socialist candidates in local non-partisan races, as well as third party candidates who have a viable electoral trajectory. The multi-racial campaign of civil rights leader Jesse Jackson for the Democratic presidential nomination in 1988 garnered over one-third of the Democratic primary vote; but its failure to build an ongoing democratic ​“Rainbow Coalition” limited its long-term impact on US politics. The Sanders ​“political revolution” will not occur unless permanent political organization, at the national and local level, emerges from this campaign.

These local political organizations should work to overcome an unproductive tendency among radicals in the United States to counterpose grassroots social movement organizing to electoral work. Only with the presence of strong activist pressure in the streets can progressive elected officials withstand the opposition of intransigent business elites. And socialists in the Sanders campaign have to strengthen their own organizational capacity, as anti-socialism remains the ideological battering ram which both centrist and conservative politicians use to fight any reform that threatens corporate power.

Presidential campaigns dominate political discourse in the United States every four years; this year, the Left must use the ideological opening created by the most anti-corporate political campaign in recent history to build political capacity that lasts well beyond this electoral cycle. Only when the labor movement and the left becomes an independent force in United States electoral politics can it escape the dilemma of lesser-evil politics.

This article first appeared in teleSUR.

Joseph M. Schwartz is a political scientist who was a national organizer of DSOC’s Youth Section and a member of its National Committee; he was a member of DSA’s National Political Committee at its founding and for many decades after.

Have thoughts or reactions to this or any other piece that you'd like to share? Send us a note with the Letter to the Editor form.
More articles by Joseph M. Schwartz
Viewpoint
The Dangers of Factionalism in DSA
If the Left is to succeed where past generations have failed, it can’t allow sectarian organizations to operate as "parties within a party."
Feature
Countering Capitalism: 40 Years of In These Times
From independent socialist newspaper to political revolution
Feature
Bringing Socialism Back: How Bernie Sanders is Reviving an American Tradition
The Sanders campaign is resurrecting socialist electoral politics and paving the way for a more radical public discourse.
Similar articles
Labor
Bain Capital Busted Unions; Canada Reopens Asbestos Mine; New York Union Tosses Prez
Mike Elk
Labor
Unions Contract Out to PR Firms That Work for Anti-Worker Groups
Mike Elk and Lee Fang
Labor
Rio Tinto Smelter Workers, United Steelworkers Reach a Deal
Kari Lydersen
Join our newsletter
Fearless journalism, emailed straight to you.
Subscribe and Save 66%