From 1999 to 2014, the Centers for Disease Control and Prevention (CDC) tracked the leading causes of death in nonmetropolitan and metropolitan areas in the United States. They compared the regional mortality data to determine how many deaths could likely have been prevented, assuming the death rates of states with the lowest rates occurred across all states.

The report finds not only that unintentional injury deaths are nearly 50 percent more likely in rural areas than they are in cities, but that distance to emergency medical care, the ongoing opiod crisis, obesity rates and other factors all leave rural Americans at higher risk of early death. Below is the CDC’s full press release and links to their research.

A new CDC study demonstrates that Americans living in rural areas are more likely to die from five leading causes than their urban counterparts. In 2014, many deaths among rural Americans were potentially preventable, including 25,000 from heart disease, 19,000 from cancer, 12,000 from unintentional injuries, 11,000 from chronic lower respiratory disease, and 4,000 from stroke. The percentages of deaths that were potentially preventable were higher in rural areas than in urban areas. The report and a companion commentary are part of a new rural health series in CDC’s Morbidity and Mortality Weekly Report.

“This new study shows there is a striking gap in health between rural and urban Americans,” said CDC Director Tom Frieden, M.D., M.P.H. ​“To close this gap, we are working to better understand and address the health threats that put rural Americans at increased risk of early death.”

Some 46 million Americans — 15 percent of the U.S. population — currently live in rural areas. Several demographic, environmental, economic, and social factors might put rural residents at higher risk of death from these public health conditions. Residents of rural areas in the United States tend to be older and sicker than their urban counterparts. They have higher rates of cigarette smoking, high blood pressure, and obesity. Rural residents report less leisure-time physical activity and lower seatbelt use than their urban counterparts. They also have higher rates of poverty, less access to healthcare, and are less likely to have health insurance.

The Health Resources and Services Administration (HRSA), which houses the Federal Office of Rural Health Policy, will collaborate with CDC on the series and will help to promote the findings and recommendations to rural communities.

In the study, mortality data for U.S. residents was analyzed from the National Vital Statistics System.

Counties were placed in two categories — urban or rural — based on the NCHS urban-rural classification scheme for counties. The current study found that unintentional injury deaths were approximately 50 percent higher in rural areas than in urban areas, partly due to greater risk of death from motor vehicle crashes and opioid overdoses. Also, because of the distance between healthcare facilities and trauma centers, rapid access to specialized care can be more challenging for people injured in rural areas.

The gaps in health can be addressed. For example, healthcare providers in rural areas can:

Not all deaths can be prevented. Some rural areas might have characteristics that put residents at higher risk of death, such as long travel distances to specialty and emergency care or exposures to specific environmental hazards. It’s also possible that excessively high death rates could signal a need for improved public health programs that support healthier behaviors and neighborhoods or better access to health care services. 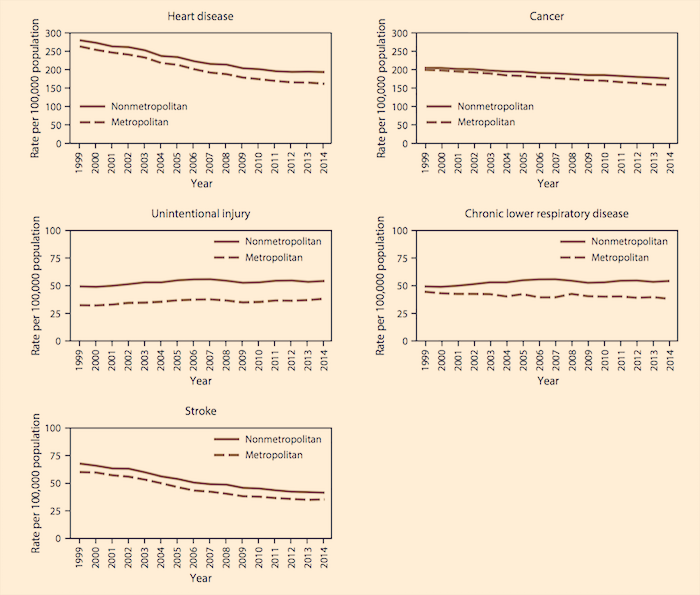 Graphs depicting the five leading causes of death as tracked in rural and urban areas by the CDC from 1999 to 2014. (Image: Google Images)

To read the entire report and companion commentary: www​.cdc​.gov/mmwr.

Support In These Times
This blog’s mission is to provide the public service of helping make the issues that rural America is grappling with part of national discourse.
Have thoughts or reactions to this or any other piece that you'd like to share? Send us a note with the Letter to the Editor form.
More articles by Rural America In These Times
ViewpointRural America
Dear Congress: Say No to Water Privatization in the Infrastructure Bill
Water costs have soared in recent years as federal funding for water infrastructure has shrunk. Privatization is the last thing we need.
Rural America
An Open Letter to Biden from Indigenous Peoples
Trump wrecked the relationship between the U.S. government and Native nations. Here's how the Biden Administration can repair this damage.
Rural America
In Less Than One Generation, We’ve Lost More Than 10 Million Acres of the Best U.S. Farmland
Similar articles
Rural America
How Farmers Markets and Food Trucks Became a Beachhead for Gentrification
In gentrifying neighborhoods, developers use food options to lure in more affluent residents, and longtime residents find themselves forced to compete against the “urban food machine.”
Pascale Joassart-Marcelli
Rural America
Boycotting the Boycotters: In Oil-Friendly States, New Bills Aim to Block Divestment from Fossil Fuels
You may divest from fossil fuels — but you may not be able to do business with the state of Texas.
Erika Bolstad
Rural America
Sorry Sonny: National Forests Are Not Crops
Secretary of Agriculture Perdue has prioritized logging, mining and grazing on the National Forests that shelter many threatened species.
Adam Rissien
Join our newsletter
Fearless journalism, emailed straight to you.
Subscribe and Save 66%