Chicago Car Wash Workers: Owner Took Their Tips, Said They Were His

Harsh, messy winter days are when car wash workers’ jobs are the hardest, and the busiest. Vehicles stream in crusted with salt and grime. The workers are outside, on their feet in slush, hands cold and raw as they scrub, wipe and buff cars clean.

Given the extra challenges of winter, people seek out full-service, hand car washes instead of cleaning their vehicles at home or driving through automated washes. So winter is when car wash workers can earn the most in tips, a crucial part of eking out a living in jobs that typically pay minimum wage — or less, as a study by the University of Illinois Labor Education Program showed in 2012.

So when the owner of Zips Car Wash on Chicago’s near west side told workers that customers’ tips belonged to him, they were not happy. Confiscation of tips is at the heart of an ongoing labor struggle for Latino workers at Zips and the Arise Chicago Workers Center, which has led a fight for the rights of car wash workers citywide since launching a campaign in 2012.

Five workers at Zips — four brothers and another man, all from Mexico — say that Zips owner Thomas Pozdol has accused them of stealing ​“his” tips and that he needed to use the tips to buy towels, soap and other supplies.

In complaints Arise filed with the National Labor Relations Board (NLRB), they allege that Pozdol fired them or cut their hours when they complained about the tips being confiscated.

“In front of customers, he was yelling and said, ​‘I’m not stupid, you’re robbing my tips,’” says Eliseo Romero. He and his brothers are from Puebla, Mexico and have been in the United States between 14 and 17 years each.

The tips issue arose two years ago, in December 2013, when the workers say Pozdol started taking their tips for a period of three months, as outlined in the complaints. Arise calculates that each worker would have earned about $150 in tips per week, for a total of $1,800 per worker during that time.

Last February, Pozdol again started taking their tips, the workers say. When they complained, he instituted a ​“no tips” policy and pasted a hand-scrawled sign saying ​“No More Tips” across a wooden blue tips box with a ​“Support Our Troops” magnetic ribbon. 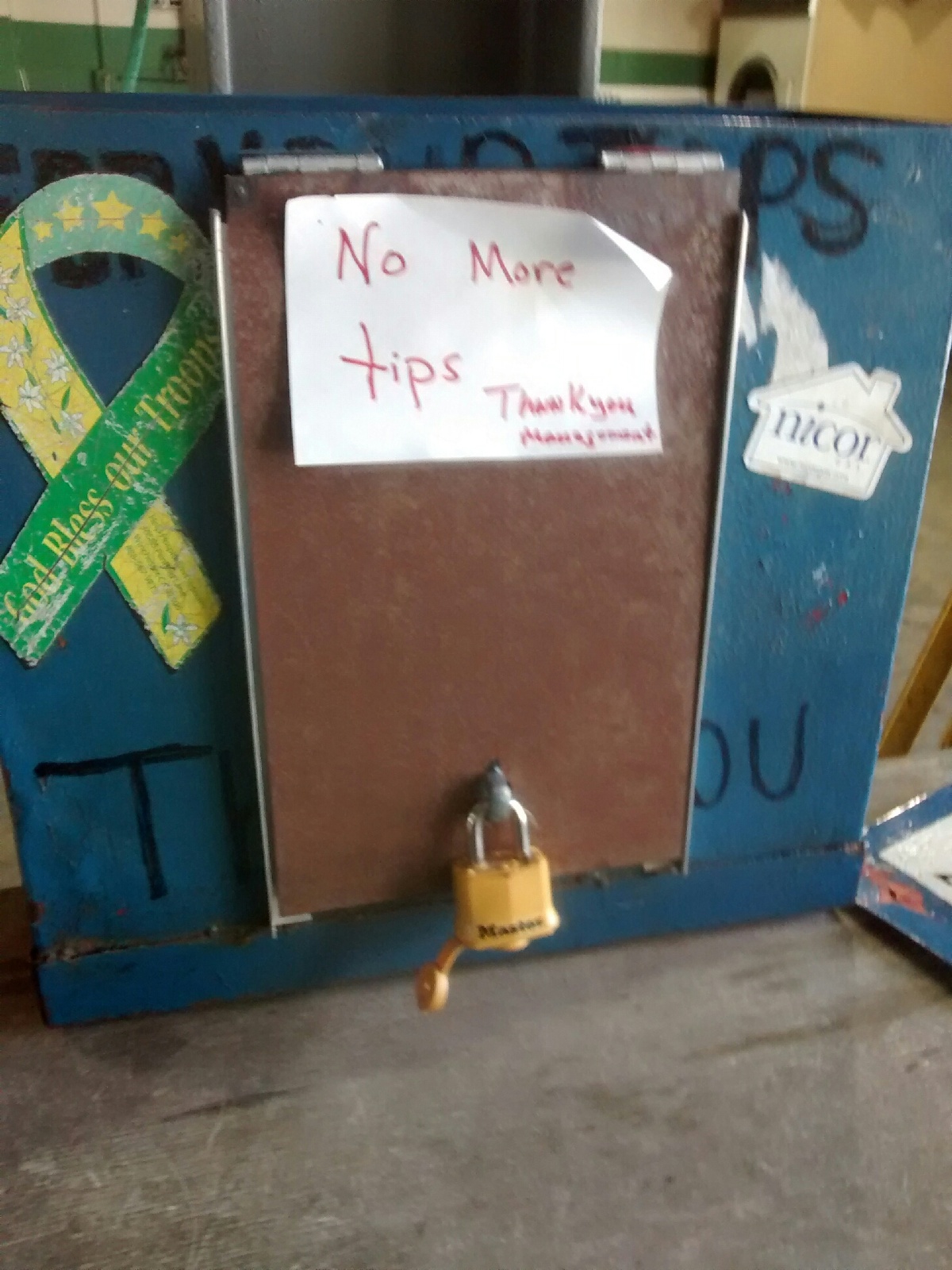 But the workers say that Pozdol still accepted tips directly from customers himself and allowed several other workers to be given tips, even as he tried to prevent the five workers named in the complaint from receiving tips. In all, Arise says, Pozdol withheld 111 days’ worth of tips from the workers.

The NLRB complaint alleges that Pozdol retaliated against the workers for demanding their rights and objecting when the tips were confiscated. The complaint alleges that Pozdol twice threatened to call immigration authorities, and that he ultimately fired the workers or cut their hours because they had been speaking out. Israel Romero was fired on March 1 after Pozdol accused him of ​“stealing tips,” according to Arise.

Jose Romero saw his schedule reduced from 40 hours to 25 hours a week, and then on September 5 he was fired. Eliseo and Aaron Romero’s schedules were reduced from 36 to 16 hours a week starting in July, and they also went seven weeks without working, the complaint says.

In all, Israel and Jose are owed more than $5,000 each and Eliseo and Aaron are each owed $1,540 for lost wages, by Arise’s calculations.

Additionally another worker, Omar Navarro, was fired after the NLRB claim was filed. He said he was told that he had taken too long for a break to repair his car. Arise is seeking $4,160 as lost wages for his alleged wrongful termination.

A hearing before the NLRB is scheduled for April 4 on the charges of retaliation. Arise has also filed a complaint with the Illinois Department of Labor. And they filed a discrimination complaint with the Equal Employment Opportunity Commission, since the workers who were prevented from collecting tips, fired and saw their hours reduced are Latino, and other workers who are not Latino were treated differently.

Last week, an attorney for Pozdol agreed to a settlement that the workers found satisfactory, according to Arise Chicago organizer Jorge Mujica.

Pozdol, reached by phone, said the car wash is closed, though as of early January cars were still being washed there. Pozdol also owns a business called ARRP Trucking & Hauling operating out of the same location. He declined to answer questions.

The Illinois Department of Labor complaint charges that Pozdol switched back and forth between paying workers with cash, personal checks and checks issued both by Zips and by ARRP Trucking & Hauling.

The complaint alleges that Pozdol told the workers he ​“discounts taxes” when he paid them in cash, but W-2s they received at year’s end show only taxes paid from the checks. The complaint seeks reimbursement for such taxes ​“withheld” but never actually paid over the course of three years.

The workers also say they were often deployed to clear lots of snow or other tasks for ARRP, and in these situations they were not able to earn tips or overtime that could have been due them.

“We were hired to wash cars, not to remove snow,” said Jose Romero. ​“The work of removing snow is fine. But we’re not making tips, and it doesn’t pay any more.” 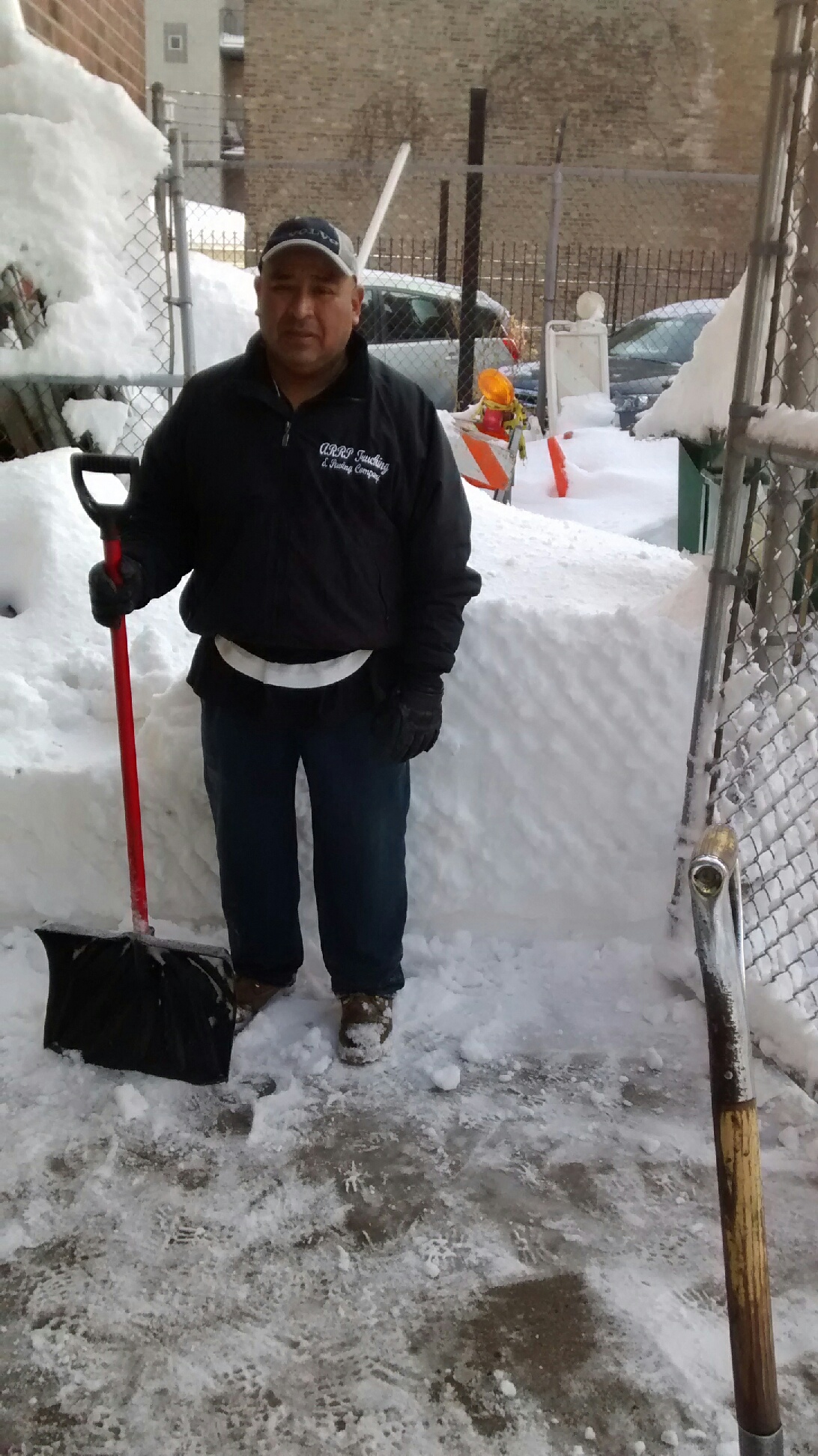 Mujica said the five workers’ situation is an example of how prevalent abuses are in the car wash industry. For more than four years, Arise has been fighting to reclaim stolen wages for workers at another Chicago car wash, in the Little Village neighborhood. That business has now been sold, according to Mujica, and the workers are awaiting an expected payment of $252,000 as a result of a lawsuit filed by the Illinois Attorney General.

The aforementioned study, by University of Illinois professor Robert Bruno and researcher Allison Dickson, found that three quarters of car wash workers in Illinois earn less than the state minimum wage of $8.25 an hour. And while the great majority of them work more than 40 hours a week, only a tiny fraction are paid legally mandated overtime. Almost all of the workers Bruno and Dickson surveyed live below the federal poverty line and the level of income considered a living wage in Chicago.

Like many car wash workers, the Romero brothers and Navarro have long worked at least one other job, including at restaurants and bakeries, in addition to their hours at the car wash.

“Wage theft is such a prevalent practice and there are very few ways to stop it,” said Mujica. ​“Owners calculate how much they can steal in any given job, and even if you complain, the chances are you can’t get your money back.”

He said that even smaller campaigns like that at Zips can help bring some accountability to such industries, as workers become more aware of their rights and how to fight for them. The Romeros initially got in touch with Arise on the advice of a friend who had worked with Arise on another issue.

“Each worker who runs a campaign, you multiply that by three or four or five,” as they spread the word, Mujica said. ​“Sooner or later that will teach employers they can’t just do this without punishment.”

Kari Lydersen is a Chicago-based reporter, author and journalism instructor, leading the Social Justice &amp; Investigative specialization in the graduate program at Northwestern University. She is the author of Mayor 1%: Rahm Emanuel and the Rise of Chicago’s 99%.
Have thoughts or reactions to this or any other piece that you'd like to share? Send us a note with the Letter to the Editor form.
More articles by Kari Lydersen
Labor
Nurses in the U.S. Are Suffering "Moral Injury"
The pandemic and staffing crisis have left healthcare workers with invisible wounds.
Labor
As Illinois Coal Jobs Disappear, Some Are Looking to the Sun
While Illinois phases out coal, clean energy jobs hold promise—both for displaced coal workers, and those harmed by the fossil fuel economy.
FeatureLabor
In the Coal Mines, Workers Are Dying to Make a Living
Mining companies increasingly rely on cheaper contractors who face longer hours and higher risk of accidents.
Similar articles
Labor
Happy Striketober. Let's Restore the Legal Right to Strike.
Now's the perfect time to fight for the right to return to a job once a strike is over.
Shaun Richman
Labor
Colectivo Is Now the Largest Unionized Coffee Chain in the U.S.—And More Could Follow
After months of waiting, the NLRB finally ruled that Colectivo workers have won their union.
Alice Herman
Labor
Judge Drops the Hammer on Union Members at Hostess
Bruce Vail
Join our newsletter
Fearless journalism, emailed straight to you.
Subscribe and Save 66%