Co-authored with Nanja Monas, a Master’s student in international development at the University of Amsterdam studying the student movement in Chile.

Thousands of students marched in the streets yesterday in Santiago, Chile, renewing a battle for free, high-quality public education that has outlasted two education ministers and drawn consistent support from more than 70 percent of the population. The march ended in violent repression, with police spraying protesters with tear gas, water cannons and ​“balines” – paintballs containing small pellet-like bullets. Sixty people were reportedly detained and one young woman lost vision in her eye after being struck with a balín. 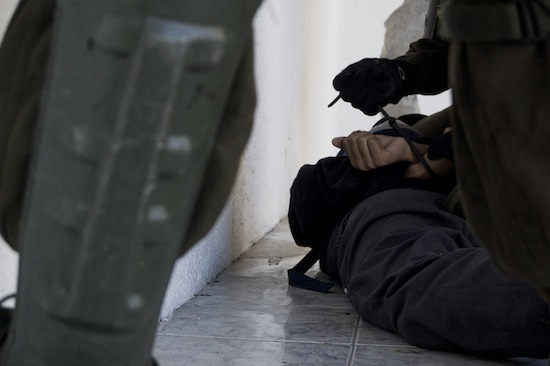 The march was the first organized student effort of 2013, a year that will also see the first presidential election since the right-wing victory in 2010, as well as the highly symbolic 40th anniversary of the coup d’etat that brought right-wing dictator Augusto Pinochet into power for 17 years and left behind the current privatized education system. The students have promised that 2013 will be a year of massive street marches, occupations of university buildings and high school campuses, and challenges to candidates in both of the country’s major coalitions. Students are frustrated with the political elite, whom they see as in league with profit-making interests and artificially kept in power by an electoral system that disadvantages outsiders.

​‘Profiteering’ in the education system is explicitly illegal; shareholders in non-profit educational institutions are not supposed to reap financial rewards. But enforcing that law has proved problematic. Activists and journalists have revealed the extensive corruption, such as administrators racking up payrolls debts in order to line their own pockets. 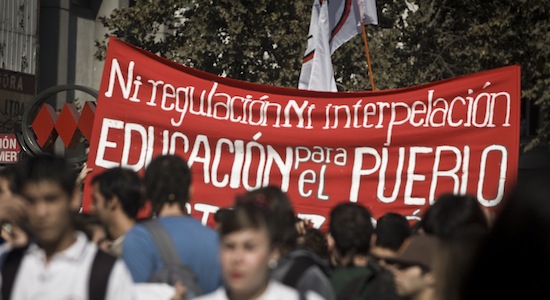 Thursday’s march was held in solidarity with the former students of the Universidad del Mar, a private institution that was shut down by the government after the extent of its financial irregularities came to light. The university, on the Chilean coast just north of Valparaíso, educates 8,000 students who are now scrambling to find a way to graduate, relocate or get a refund on their pay-as-you-go education before the school closes in December of 2014.

The marchers called for the federal government to nationalize the school so that its students would be able to continue to learn. ​“We don’t want more scholarships. We don’t want more credit. The only thing that credit does is push families further in debt. We want free public education,” Felipe Muñoz, one of the march’s organizers, tells In These Times. 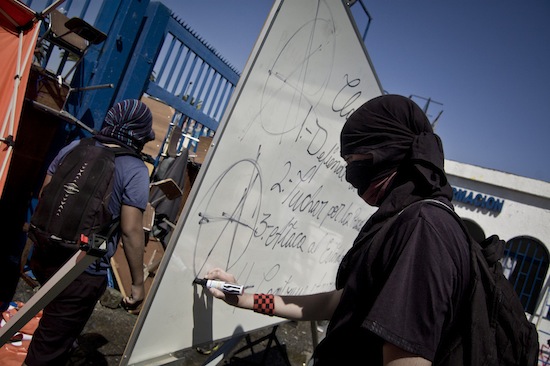 Students at private universities, which now outnumber public ones, are living the legacy of the non-state school system that ballooned with little regulation or quality control during Pinochet’s rule from 1973-1990. Student leaders at these private universities challenge the very premises on which their institutions are founded: Valeska Concha, spokesperson for the private university students’ association, tells In These Times that the movement wants not just an end to profiteering, but nationalization of all universities.

The lofty demands of the students fly in the face of the neoliberal logic imposed by Pinochet’s right-wing dictatorship, which tortured and ​“disappeared” thousands of dissidents to install an unchecked free market regime. His neoliberal macroeconomic policies were for the most part carried on by his democratically elected successors, fueling Chile’s reputation as South America’s free-market laboratory. But over the past two years, college and high school students have begun to challenge the economic, political and educational legacies of the 17-year dictatorship. The student movement calls into doubt the success of Chile’s post-democratic transition, raising questions about whether illegal profiteering or even the entire capitalist enterprise could be to blame for a new generation of citizens’ growing pains.

The day before the march, former Chilean President Michele Bachelet announced that she will leave her post as the United Nations envoy for women’s issues in order to put her hat in the ring in the upcoming presidential election. The long awaited-move pleased supporters of the center-left Socialist Party leader and frustrated her detractors. Both camps have been waiting out her campaign of silence, which persisted for months despite constant chatter among the national punditry regarding her potential candidacy.

Bachelet has little credibility with student activists, many of whom harbor strong resentment over her decisions to exclude student voices in the last round of education reform that arose from the 2006 Revolución Pengüina (famously led by high school students in black and white school uniforms).

Felipe Muñoz, one of the organizers of the march, said that 2013 would be a year of ​“expectations.” He indicated that students are confident that the pressure they put on candidates will get them closer to free public education, although the details of implementation will likely lead to new battles. 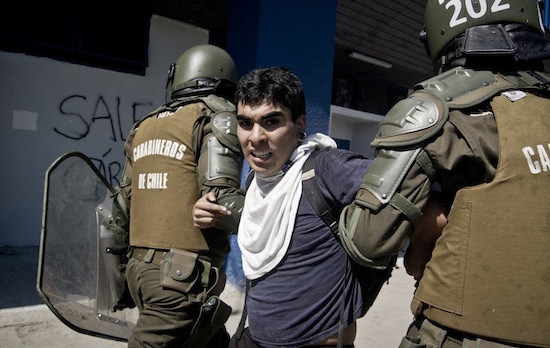 Get your copy
Jackson Foote is a Ph.D. student in mass communication at the University of Wisconsin-Madison. He studies the relationship between social movements and the media in the Americas.
Have thoughts or reactions to this or any other piece that you'd like to share? Send us a note with the Letter to the Editor form.
More articles by Jackson Foote
The ITT List
The War for Peace in Colombia
Uprising
Re-Radicalized Chilean Students Plan Mass Strike
Similar articles
Uprising
Teenage Activist Malala Yousafzai Remains in Critical Condition
Sarah Cobarrubias
Uprising
Escalating the Battle Against Mountaintop Removal Mining
Melinda Tuhus
Uprising
Dancing to a Different Drum
Bhaskar Sunkara
Join our newsletter
Fearless journalism, emailed straight to you.
Subscribe and Save 59%