Minnesota Must Say “No” to Enbridge’s Line 3 Pipeline

Minnesota has taken significant steps to develop its renewable energy resources. Beginning more than 20 years ago, the state has promoted energy efficiency, wind, and solar power, to reduce greenhouse gas emissions while creating jobs and cleaning the environment. The state is committed, by law, to sharp reductions in greenhouse gas emissions.

The proposed Enbridge pipeline project would be a big step in the opposite direction. It is a litmus test of whether Minnesota is serious about climate change. Before explaining why, it is important to be clear on the urgency of the issue. A recent report published by the National Academy of Sciences said that there is a 1‑in-20 chance that human-caused climate change will have an impact that is ​“beyond catastrophic” by the end of the century, threatening the very survival of our descendants.

Ignoring the risk of climate change caused by human greenhouse gas emissions is gambling with the lives of young Minnesotans and all future generations.

In that context, the Minnesota Public Utilities Commission (PUC) will make a formal decision on whether to allow Enbridge to construct its proposed multibillion-dollar Line 3 Replacement Pipeline project. The pipeline, which would be used to transport heavy crude oil extracted from tar sands in Canada, would travel across lake country in Northern Minnesota.

The Department of Commerce’s analysis of the proposal concluded that the pipeline is not needed for our energy needs and stated that ​“Minnesota would be better off if Enbridge proposed to cease operations of the existing Line 3, without any new pipeline being built.”

Certainly, the economy will continue to use fossil fuels as we transition to a clean energy future. However, this pipeline project will make our climate-altering greenhouse gas emissions even worse than they already are, working against the greenhouse gas reduction goals in law. It facilitates the extraction of additional tar sands oil — the dirtiest of fuels, with a greenhouse gas impact as much as 37 percent higher than conventional oil. We need to minimize greenhouse gas emissions as we phase out the use of fossil fuels over the next few decades, not encourage the use of the most harmful of those fuels.

Without this pipeline, the economics of tar sands extraction — already costly — simply don’t make sense, and the oil and gas companies will leave the tar sands in the ground. Expanding rail capacity for transporting tar sands is too expensive and cannot be sustained.

Many of the people most affected by the proposed pipeline are native people, whose families have lived here for hundreds of years or longer. For them, the impact of the pipeline matters not only while it is under construction and while it is transporting tar sands, but also 100 years from now, decades after it is no longer in use. The environmental review stated that ​“disproportionate and adverse impacts would occur to American Indian populations” regardless of the route chosen. 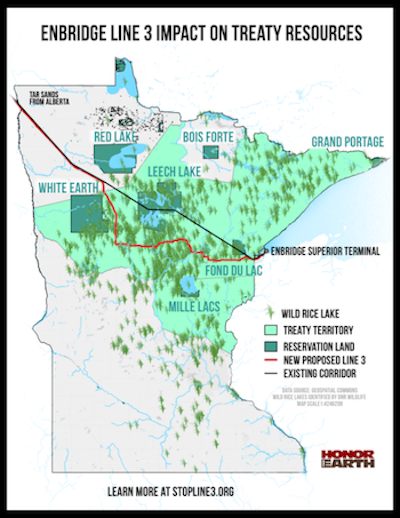 To add insult to injury, the Enbridge proposal would abandon the old pipeline after draining the oil and taking other steps to reduce harm. Landowners who were forced to host the existing pipeline deserve the chance to determine what happens to their property. Rather than respecting the interests of local landowners, Enbridge wants to decide this question based solely on its corporate interests.

Leaving an aging pipeline in place is like buying a new car and leaving the old, rusting car in the backyard, slowly dripping remnants of toxic fluids into the ground. Fluids do continue to leak out even if the tanks have been drained. In this case the analogy is even worse. It is like leaving your rusting car in somebody else’s backyard, without their consent, to pollute their soil and water.

In addition to the disproportionate impact on native people and those who own land crossed by the pipeline, the children, grandchildren, and future generations of all Minnesotans will be harmed by the climate impacts. Regulatory decisions like this one before the PUC are often a balancing act. Much of the political pressure in support of the project comes from the need for jobs like those that would construct the massive pipeline. However, the decision in this case is not a close call.

Although those jobs do not justify building a pipeline that fails to meet the legal criteria for granting approval, we must take seriously the need to create jobs for the building trades. In that regard, removing the existing pipeline would create a significant portion of the jobs that would have been created if the proposed pipeline was built.

To restate the urgency of the climate issue, the new report published by the National Academy of Sciences estimated a 1‑in-20 chance that global temperatures could rise by five degrees Celsius by the end of the century—far worse than the two degree rise that the Paris Climate Accords committed to preventing. Worse even than the catastrophic impacts that the report said a three degree rise would trigger. The report described a five degree increase as ​“beyond catastrophic” because it threatens the very existence of humanity.

One of the scientists involved said, ​“To put [it] in perspective, how many of us would choose to buckle our grandchildren to an airplane seat if we knew there was as much as a 1‑in-20 chance of the plane crashing?”

With that sobering image in mind, the Enbridge pipeline decision is truly a litmus test of whether Minnesota is serious about addressing climate change.

For the sake of the children of today and tomorrow, we dare not fail this test.

(“Tar Sands Pipeline: Litmus Test of Whether Minnesota is Serious about Climate Change” was first published on the Apple Pie Alliance website and is reposted on Rural America In These Times with permission from the author.)

See the options
John Marty is a Minnesota State Senator. He has authored numerous consumer protection, government ethics and environmental initiatives. He is an outspoken leader in the fight to remove special interest money from the political process.
Have thoughts or reactions to this or any other piece that you'd like to share? Send us a note with the Letter to the Editor form.
Similar articles
Rural America
Our Chemical-Dependent, Profit-Driven, Industrial Ag Complex is Not Going Quietly
John Ikerd
Rural America
Just What the Heck is “Rural America”?
Kenneth Johnson
Rural America
Standing Rock Sioux Vow to Ignore Army Corps Eviction Order
Rural America In These Times
Join our newsletter
Fearless journalism, emailed straight to you.
Subscribe and Save 66%