Blacks, Latinos and Indians Think About Climate Change in Ways that Most Other Americans Do Not

In March, when the Yale Program on Climate Communication released a detailed study of U.S. public opinion about global warming, the New York Times looked at the data and drew some interesting conclusions. Among them: ​“Most people think climate change will harm Americans, but they don’t think it will happen to them.” They have a point.

But, as it turns out, not all Americans feel the same way. A closer examination of the data reveals that people who live in certain places tend to feel more vulnerable to climate change than others.

Below are a series of maps that illustrate this disconnect.

“Global warming will harm people in the U.S.” 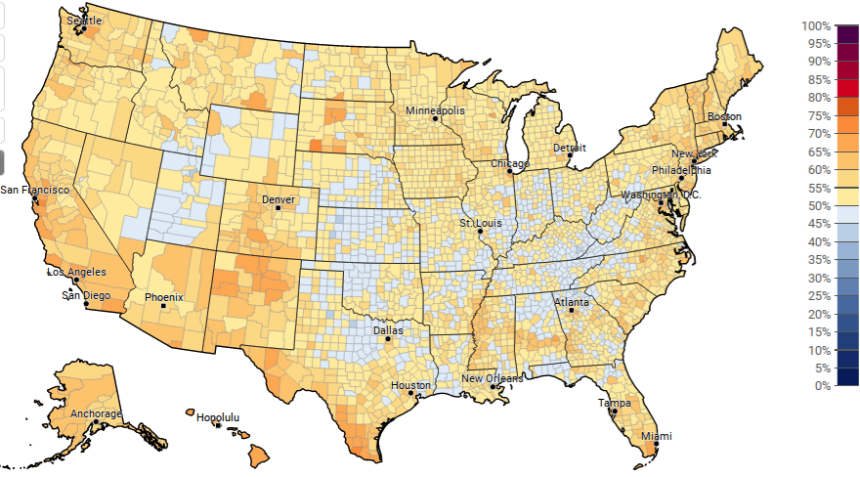 “Global warming will harm me personally” 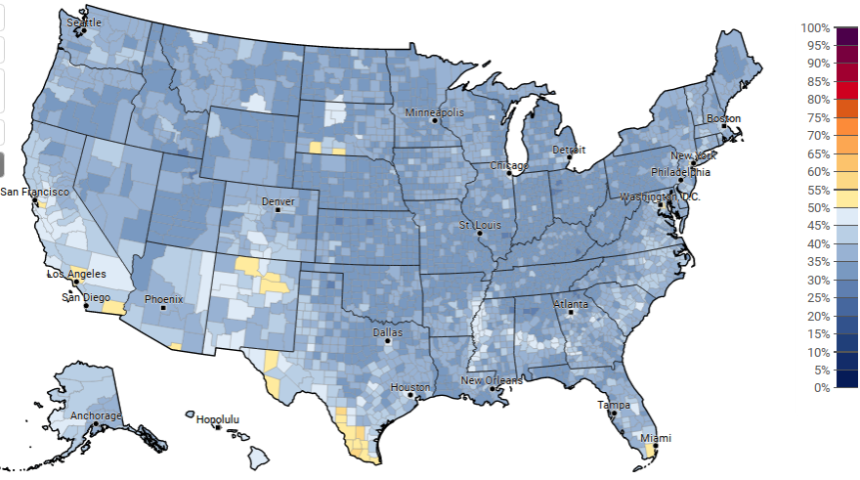 At first glance, it might appear that Americans are cavalier and unreflective: they think climate change will only hurt ​“someone else.” It is important to note, however, that the perceived risk of climate change is not divided equally — or randomly. If you look closely at the maps, a sinister pattern emerges.

Adults per county who think ​“global warming will harm me personally,” difference from national average 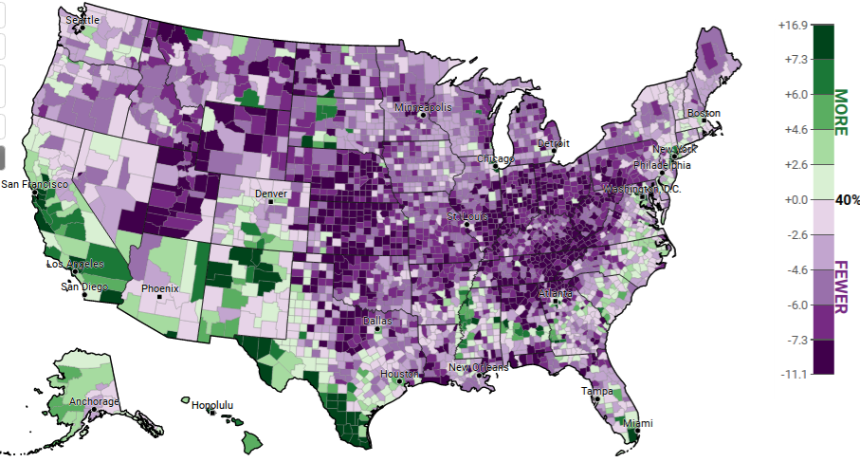 What accounts for these stand-out patches of green in Alaska, the four-corners area, Montana and the Dakotas? Maybe this next map will help. 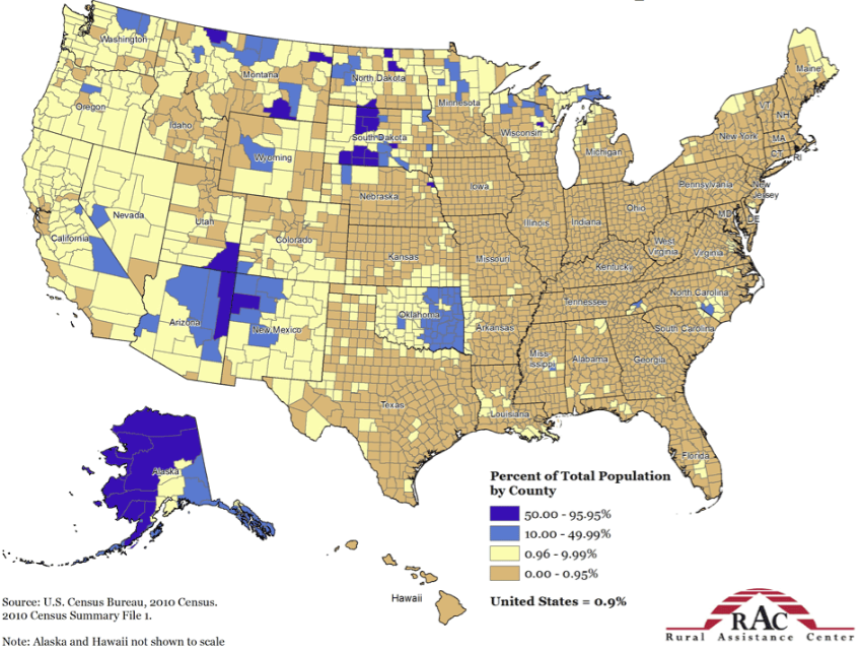 In the purple states of Montana, North Dakota, and South Dakota, a map of perceived risk from climate change turns out to be a nearly perfect map of indian reservation counties. This just might have something to do with the collective memory of the tribes in those areas. The Blackfeet, whose reservation is in the northwest corner of present-day Montana, the Northern Cheyenne, whose reservation is at Lame Deer in the southwest corner of the state, and the various bands of the Lakota, whose reservations are scattered throughout present-day North and South Dakota, among others, are tribes of the plains who shaped their ways of life around the migration of the buffalo herds. In the 1860s and 1870s, when these tribes refused to go quietly and mounted a fierce resistance to white settlement, the United States government set about destroying the buffalo. In a matter of years, the natives saw the ecology of the entire region drastically altered, their way of life driven to near extinction, and themselves forced onto barren, ever-shrinking reservations — scraps of land seen as unprofitable by white settlers, businesses and the government. Since the discovery of uranium, coal, oil and gas rendered these lands not so valueless after all, these peoples have been subjected to the brunt of the environmental destruction wreaked on the region by the mining and oil companies. In short, Native Americans generally have reason to think environmental damage done by white civilization will hurt them, first.

However, this leaves some of the green patches in the ​“global warming will harm me personally” map unaccounted for. What do we make of the belt of green that contours the southern border in Texas? And the string of green that runs along the Mississippi River and east through Alabama?

Let’s look at some more maps.

Hispanic and Latino population by county 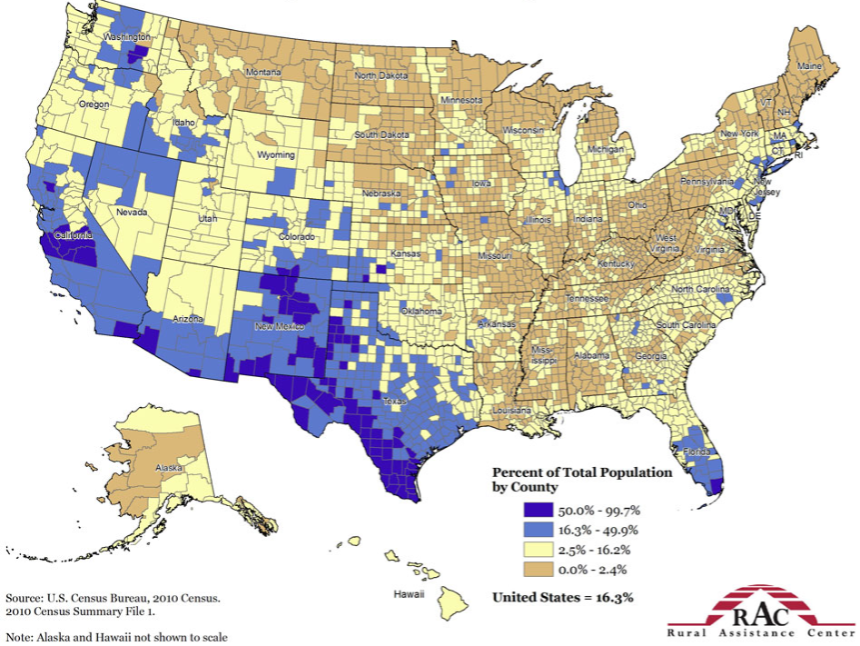 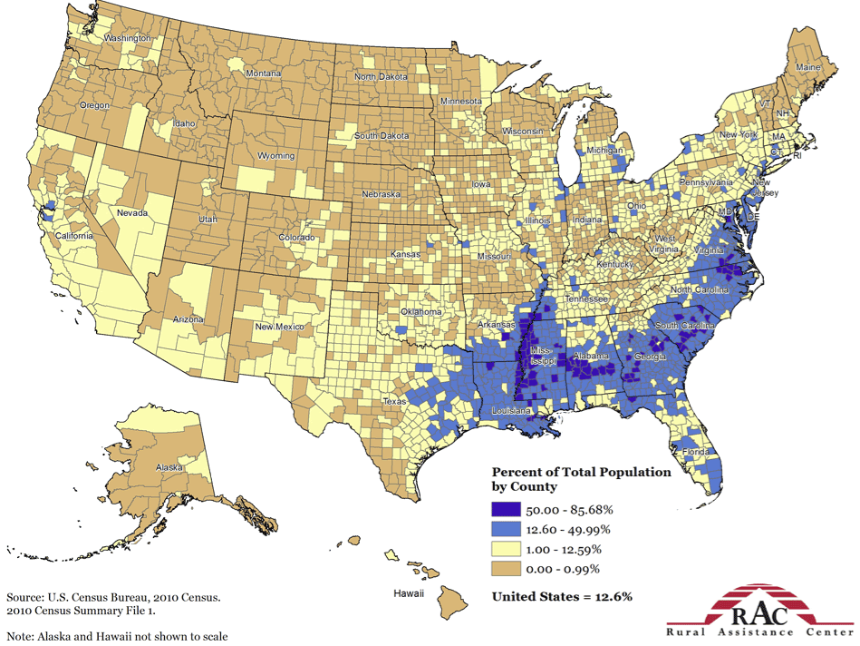 Though the exact numbers are difficult to measure, climate change is a major driver of increased human migration. It makes sense, then, that awareness of the harm caused by global warming would be heightened along the border between the United States and the countries to the south that will suffer, and are suffering, most of the change — and among the people who have connections to those places.

It also makes sense that black communities would be wary of the threats posed by environmental damage. According to Vann Newkirk, a staff writer at The Atlantic, more than half of people who live close to hazardous waste are people of color. Black children, he points out, are twice as likely to suffer from lead poisoning as white children. Newkirk concludes that this is no accident: ​“pollution and the risk of disaster are assigned to black and brown communities through generations of discrimination.”

According to the Yale study, 70 percent of Americans believe global warming is happening, 53 percent believe it is mostly human-caused, and 75 percent favor regulating C02 as a pollutant. Trump ignored that public opinion when he justified pulling out of the Paris climate agreement by pitting economic growth against mitigating the effects of climate change. He was speaking clearly to the only audience with whom that argument could possibly make sense: those Americans who don’t think climate change will hurt them.

Joseph Bullington grew up in the Smith River watershed near White Sulphur Springs, Montana. He is the editor of Rural America In These Times.

Have thoughts or reactions to this or any other piece that you'd like to share? Send us a note with the Letter to the Editor form.
More articles by Joseph Bullington
LaborRural America
After Yellowstone Floods, Tourism Workers Lose Their Jobs—And Their Housing
Many Yellowstone workers depend on their bosses for a place to live. When the flood washed away their jobs, they lost their housing, too.
DispatchRural America
Trailer Park Residents Take on Venture Capitalists—and Win
As gentrification sweeps the West, investors are buying up mobile home parks. Residents of this Colorado park got together and bought it themselves.
Rural America
In Defense of Hunting
In our age of ecological collapse, hunting animals for food is as relevant as ever.
Similar articles
ViewpointRural America
No, More Pipelines Aren’t the Solution to High Gas Prices
Reviving Keystone XL wouldn’t lower gasoline prices but it would increase carbon emissions, environmental destruction and toxic pollution.
Ted Williams
ViewpointRural America
GDP: A Countdown to Doom
The numbers we use to measure the economy’s recovery from Covid also measure the rate at which we barrel into ecological catastrophe.
Joseph Bullington
Rural America
Racing to Save Languages and Cultures, Native American Tribes Rapidly Roll Out Vaccines
Covid-19 has killed Native people at a faster rate than any other group in the U.S., but vaccine rollout in Indian Country has so far been a success story.
Alex Brown
Join our newsletter
Fearless journalism, emailed straight to you.
Subscribe and Save 59%