Rural America In These Times January 6, 2017

In November, Agrarian Trust held its second ​“Our Land” symposium in Santa Fe and Albuquerque, N.M. The Trust, a collaboration between the Schumacher Center for New Economics and Greenhorns, a grassroots network for young agrarians, is working to secure land access for the next generation of farmers. This is important. In the next 20 years, as today’s farmers age and retire, American Farmland Trust estimates 400 million acres of U.S. farmland will change hands. ​“Hands” plural might be optimistic. Without intervention, the increasing value of farm real estate nationwide will continue to price-out new entrants to farming. Furthermore, as those acres hit the open market they are likely to go where the money is. These days, that usually means becoming disembodied terrestrial testing grounds for our always-expanding, always-consolidating multinational agribusiness corporations as they pursue new and cutting-edge petro-chemical applications (for us to eat).

Over several days, Our Land 2: Tracing the Acequia Commons featured speakers from many facets of the sustainable food movement — farmers, conservationists, water experts, people from frontline communities, artists, activists, professors and lawyers — who focused on what it will take to build a less diabolical food system in the United States. 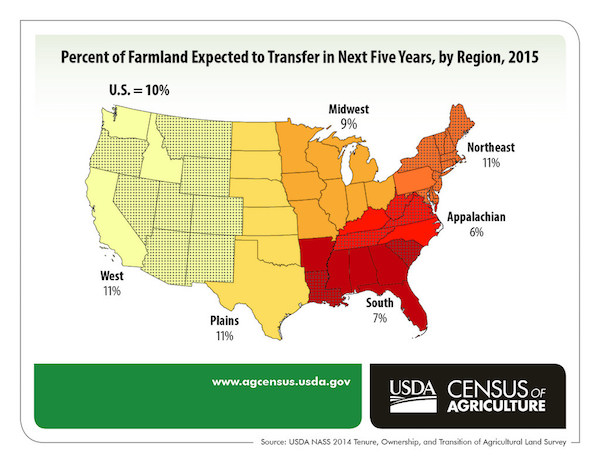 Videos of these presentations have been uploaded to the Trust’s website and a lecture titled ​“Land relations: Conflict, subsistence, extraction, compromise and utopia of our domesticated nature,” by Eric Holt-Giménez, is worth a watch.

Holt-Giménez is the executive director of The Institute for Food and Development Policy, also known as Food First. According to his bio on food​first​.org:

Eric Holt-Giménez has been executive director of Food First since 2006. He is the editor of the Food First book Food Movements Unite! Strategies to Transform Our Food Systems; co-author of Food Rebellions! Crisis and the Hunger for Justice with Raj Patel and Annie Shattuck; and author of the book Campesino a Campesino: Voices from Latin America’s Farmer to Farmer Movement for Sustainable Agriculture, and of many academic, magazine and news articles. Of Basque and Puerto Rican heritage, Eric grew up milking cows and pitching hay in Point Reyes, Calif., where he learned that putting food on the table is hard work. After studying rural education and biology at the University of Oregon and Evergreen State College, he traveled through Mexico and Central America, where he was drawn to the simple life of small-scale farmers.

In the 51-minute presentation, embedded below, Holt-Giménez offers his take on what he calls the ​“capitalist food regime.” He says that though our current approach to agriculture is thousands of years in the making, ​“the forms of ownership at the core of today’s food and farming system have changed surprisingly little since early colonization.” These forces, he says, have turned the United States into the ​“center of a powerful, multi-trillion dollar, global food machine” — a machine that, despite what we are told, fosters poverty, hunger and ecological destruction. Holt-Giménez is pessimistic about global capitalism ever embracing sustainable solutions because he, like many, has deduced that the need for constant economic growth will require nothing short of ecological suicide. He acknowledges that establishing an alternative system is a long-shot that probably won’t work, but says this counter-movement — towards agroecology, sustainable farming and food sovereignty — has enough people on-board and is, in many aspects, already thriving around the world. What the movement doesn’t have, he says, is land:

“Even as the pressures of industrialization and financialization push many farmers out of agriculture, a contingent of farmers are increasingly avoiding the destructive inputs pushed on them by the seed and chemical industries. Moreover, a growing number of consumers reject the poisonous processed food sold by the agrifoods industry. Rural and indigenous communities are rising up to resist fracking, pipelines, CAFOs. Farmers and farmworkers are organizing strikes and boycotts against starvation wages and inhumane working conditions. Across the entire country there are instances of older and beginning farmers forging agroecology, permaculture, organic and urban agriculture — who are working with consumers to get fresh and healthy food to the people who need it most. There are counter-movements for food justice and food sovereignty growing in rural and urban communities all over the United States. People from all walks of life are looking to return to farming. It’s an exciting time.

The food movement is stretching its imagination across rural and urban areas from farm to fork. Paradigms, practices and politics are all changing — changes that are being vigorously resisted by the agencies and corporations of the existing food machine. Unlike the past, in which land, work and territory defined peoples’ resistance, today the entire food system makes up a turbulent struggle — from the fight for a better minimum wage to the struggles against pipelines. But the farmers on the frontlines of this new agrarian struggle are finding that the efforts to build healthy equitable food systems — ones that provide jobs, that keep the food dollar in the community — are inevitably limited by the lack of access to one essential resource: Land.”

Holt-Giménez doesn’t hold back when describing what he finds wrong with mankind’s current trajectory, but he also articulates why he believes the eclectic and diverse food movement is uniquely positioned to transcend politics and actually change things for the better. He also warns against the possible rise of fascism and the loss of hope. A brief and interesting Q&A concludes the lecture. Check it out and let us know what you think in the comments section.

This blog’s mission is to provide the public service of helping make the issues that rural America is grappling with part of national discourse.
Have thoughts or reactions to this or any other piece that you'd like to share? Send us a note with the Letter to the Editor form.
More articles by Rural America In These Times
ViewpointRural America
Dear Congress: Say No to Water Privatization in the Infrastructure Bill
Water costs have soared in recent years as federal funding for water infrastructure has shrunk. Privatization is the last thing we need.
Rural America
An Open Letter to Biden from Indigenous Peoples
Trump wrecked the relationship between the U.S. government and Native nations. Here's how the Biden Administration can repair this damage.
Rural America
In Less Than One Generation, We’ve Lost More Than 10 Million Acres of the Best U.S. Farmland
Similar articles
Rural America
The 40-Year Robbing of Rural America
Since the 1980s, says Professor Marc Edelman, financial capital has developed imaginative new ways to seize assets from small towns and rural areas.
Olivia Weeks
ViewpointRural America
Mourn the Extinct, Fight like Hell for the Living — a Wildlife Reporter’s Plea
The 23 species declared extinct by the U.S. Fish and Wildlife Service show us how much we have to lose. They should also motivate us to fight to stop further loss.
John R. Platt
Rural America
A Pesticide-Laced Flea Collar Has Been Linked to Almost 1,700 Pet Deaths. Why Hasn’t the EPA Issued a Warning?
Some experts say the collar reveals a fundamental problem with EPA’s pesticide regulation process.
Johnathan Hettinger
Join our newsletter
Fearless journalism, emailed straight to you.
Subscribe and Save 59%