Some Tribal Economies Depend on Resource Extraction, But These Days that Doesn’t Translate into Jobs

A couple of years ago a tribal leader showed me an abandoned lumber mill near the village of Tyonek, Ala. The company promised jobs and, for a couple of decades, there were jobs. But after the resource was consumed, the mill closed, the company disappeared, and the shell of the enterprise remains today.

This same story could be told in tribal communities across North America. Sometimes the resource was timber. Other times gas and oil. Or coal.

The lucky communities were left with a small toxic dump site. More often there was major cleanup work required after (plus a few more jobs). In the worst case scenario, a Superfund site was left behind requiring government supervision and an even greater restoration effort. But all along, and in each case, the accompanying idea was that jobs would be a part of the deal. There would be construction jobs to build the mine, pipeline or processing plant. Then there would be truck driving jobs moving materials, a few executive jobs (especially in public and community relations) and, of course, the eventual supervision of the cleanup (especially if the tribal government had its own environmental protection agency).

That was the deal. But it’s one that is no longer true. Now the resource is extracted, pipelines are built, and toxic waste is left behind — and the promised jobs are limited to the initial construction jobs.

The renewed effort to build the Keystone XL pipeline is a classic example of this shift. When President Donald J. Trump signed the executive order to approve the project he promised ​“thousands of jobs.” That’s true enough for the construction phase, but only 35 employees would be needed to operate the pipeline, according to the State Department report.

Keystone, at least, is prospective jobs. New ones. But the bigger challenge for the Navajo Nation, the Crow Nation and some 30 tribes with coal reserves or power plants is that new deal for resource-based plants and extraction does not create as many jobs.

The numbers are stark.

The U.S. Energy and Employment Outlook 2017 shows that electricity from coal declined 53 percent between 2006 and 2016. Over that same period, electricity from natural gas increased by 33 percent and from solar by 5,000 percent.

Coal is still a major source of energy. But it’s in decline. Coal and natural gas account for two-thirds of all electricity generation in the United States. And that’s expected to remain so until at least 2040, when the market share declines to a little more than half.

But because the market’s long-term trend is down, tribes that develop coal will not share in the rewards of either major profits or in a spike in jobs.

The only hope for this shrinking industry is to export the coal to other countries (something that will be extremely difficult because so many other nations have already agreed to the Paris climate targets). As Clark Williams-Derry has reported for the Sightline Institute:

“Robust, sustainable Asian coal markets were never a realistic hope for U.S. coal exporters: the transportation costs were too high, the competition too fierce, and the demand too unstable. So the coal industry’s PR flacks may continue to spin tales about endless riches in the Asian coal market, the financials are telling a much more sobering story: that the coal export pipe dream continues to fade away, leaving a bad hangover on the coal industry’s balance sheets and a lingering bad taste in the mouths of coal investors and executives alike.”

On top of that, Derry-Williams points out that China’s coal consumption has fallen for three consecutive years. In the international context, coal is the most polluting of the three types of fossil fuels. More than 80 percent of the world’s known coal reserves need to stay in the ground to meet global warming targets.

There are jobs in the energy field, but, as the Department of Energy report puts it: ​“Employment in electric power generation now totals 860,869 … (and) the number of jobs is projected to grow by another 7 percent but the majority will be in construction to build and install new renewable energy capacity.”

The green economy is taking over. (Trump or no Trump.)

Indian Country’s development of coal (or not) has been the story so far in the Trump era.

Last month Interior Secretary Ryan Zinke signed a memorandum lifting restrictions on federal coal leasing. He said the ​“war on coal is over.” Then he quoted Crow Tribal Chairman Darrin Old Coyote saying, ​“there are no jobs like coal jobs.” 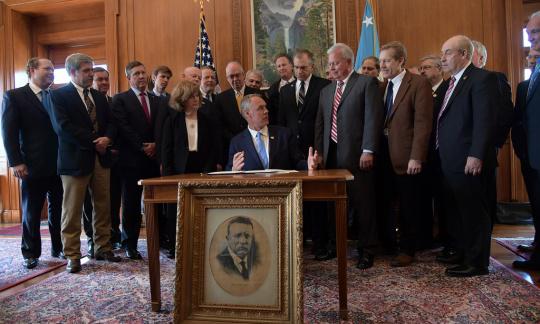 Meanwhile in Alaska, another coal project was put to rest in a tribal community. The village of Tyonek has been opposed to the Chuitna Coal Project. (Previously: Mother of the Earth returns to Tyonek.) After a decade of planning, PacRim Coal suspended the project last month because an investor backed out. The project could be brought back to life. But that’s not likely, because coal is a losing bet for any investor.

According to Alaska Public Media that meant a joyful celebration in Tyonek. The president of the village Native Council, Arthur Stanifer said, ​“What it means for us is our fish will continue to be here for future generations, also our wildlife, like the bears and the moose and the other animals will be secure and they’ll be here. They’ll have a safe place to be.”

And what of the jobs? That’s the hard part. The prospects for extraction-related jobs are about to be hit by even more disruptive forces. For example in the oil fields of North Dakota one of the great paying jobs is truck driving — moving material back and forth. But already in Europe companies are experimenting and will soon begin the shift to self-driving vehicles. It’s only a matter of time before that trend takes over elsewhere because it fits the model of efficient capitalism. Self-driving trucks don’t need rest breaks, consume less fuel and have fewer accidents. That same disruption of automation is occurring across the employment spectrum. Jobs that can be done by machines, will be.

So if jobs are no longer part of the equation, does natural resource extraction benefit tribal communities?

The answer ought to include a plan where the United States government and tribes work together to replace these jobs. Retrain workers and invest in the part of the energy sector that’s growing: renewable fuels. But that’s not likely to happen in Trump Era.

(“The New Deal for Tribes: Resouce Extraction & Toxic Waste (Minus the Jobs)” was originally published on the author’s website—Tra​hantRe​ports​.com—and some images were added by Rural America In These Times. Follow Mark on Twitter @TrahantReports.)

Support In These Times
Mark Trahant is the Charles R. Johnson Endowed Professor of Journalism at the University of North Dakota. He is an independent journalist and a member of The Shoshone-Bannock Tribes.
Have thoughts or reactions to this or any other piece that you'd like to share? Send us a note with the Letter to the Editor form.
Similar articles
Rural America
Surging Wheat Prices and Fertilizer Shortages: How the War in Ukraine Could Impact U.S. Agriculture
Both Ukraine and Russia are major exporters of agricultural products. In a market that’s “incredibly global,” U.S. farmers will feel the effects of war and sanctions.
Johnathan Hettinger, Madison McVan and Amanda Pérez Pintado
ViewpointRural America
Firefighters Are Worth More than $13.45/Hour
Federal wildland firefighters are leaving the workforce because the risks of the job outweigh the poor pay. It couldn't happen at a worse time.
Jonathon Golden
Rural America
Vatican Country: American Farmers on the Agricultural Message of Pope Francis
Dayton Martindale
Join our newsletter
Fearless journalism, emailed straight to you.
Subscribe and Save 66%