The same scientists who provided the population viability analysis to the U.S. Fish and Wildlife Service (USFWS) for the red wolf have sent a rebuttal to the agency, accusing it of ​“many alarming misinterpretations” in its justification for removing most of the remaining animals in the wild.

Last month, the USFWS announced that it would recapture 32 of the 45 wolves in the wild and leave only those on federal lands. Currently, there are about 200 red wolves in captive breeding programs in the U.S. as part of the agency’s Species Survival Plan (SSP). 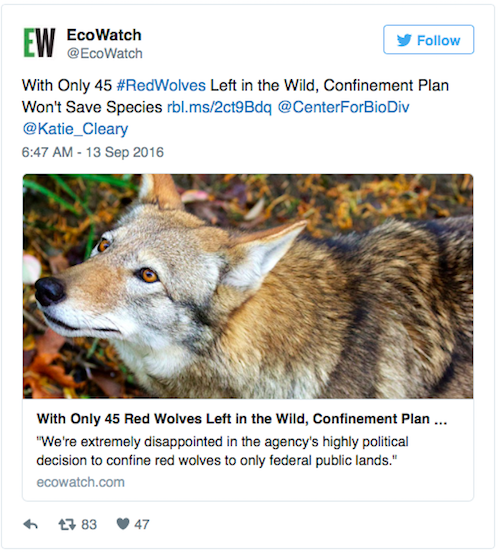 The letter, released to the public today, bluntly counters the agency’s proposal to recapture 32 wolves and place them in captive breeding programs:

“A singular focus on the SSP will no doubt result in extinction of red wolves in the wild.”

On Sept. 29, the U.S. District Court for the Eastern District of North Carolina issued a preliminary injunction ordering the USFWS to stop capturing and killing — and authorizing private landowners to capture and kill — members of the rapidly dwindling population of wild red wolves.

“There’s no need to capture wild wolves in an effort to save the captive population, which is what the service contends,” said Defenders of Wildlife attorney Jason Rylander.

“The scientists’ letter makes clear that the U.S. Fish and Wildlife Service’s proposal to withdraw red wolves from most of their range in North Carolina has no scientific basis and confirms that the agency’s conclusion that the captive population is at risk is wrong,” said Jamie Rappaport Clark, president and CEO of Defenders of Wildlife. 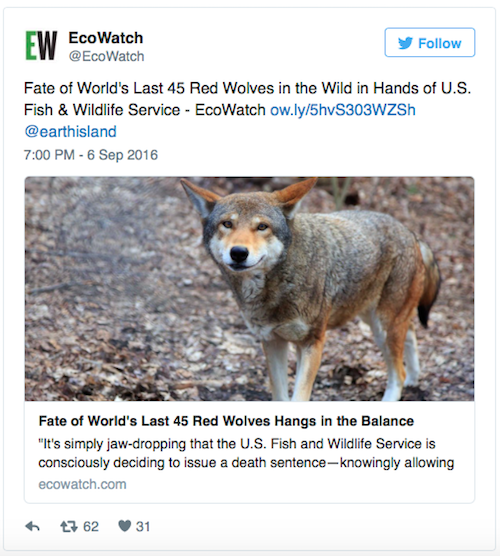 A poll of North Carolina voters and the state legislature have shown strong support for the efforts to restore the red wolves to their native habitat. For now, the injunction remains in effect. No court date has been set for a hearing and it is not expected until sometime in 2017.

The letter asks the agency to ​“edit or append” its decision memo. ​“This letter confirms what red wolf advocates have been saying all along: capturing wild red wolves and placing them into captivity isn’t the answer. The U.S. Fish and Wildlife Service needs to recommit to red wolf recovery in the wild,” Clark said.

(This story first appeared on EcoWatch.)

Dan Zukowski is an environmental journalist and nature photographer. Member, Society of Environmental Journalists. Follow him on Twitter @DanZukowski and visit DBZ Photo.
Have thoughts or reactions to this or any other piece that you'd like to share? Send us a note with the Letter to the Editor form.
Similar articles
Rural America
How the Covid Land Rush Is Hurting New Farmers
The pandemic has inspired city dwellers and investors to buy land in rural areas. That’s driving up farmland prices and pushing some beginning farmers out of the market.
Sadie Morris
ViewpointRural America
On Environment, Biden Needs to Do a Lot More than Roll Back the Rollbacks
President Trump gutted almost 100 environmental protections. Here’s a list of the ones Biden should undo first and why he must not stop there.
Jonathan Thompson
Rural America
‘An Abrupt Wake-Up Call’: Alaska Peers into a Future Without Oil
Yereth Rosen
Join our newsletter
Fearless journalism, emailed straight to you.
Subscribe and Save 66%