Uprooted by war and rejected by the EU and Pakistan, many Afghans live in ramshackle conditions with little-to-no aid.

On October 2, European Union leaders and Afghan government officials signed an agreement called the ​“Joint Way Forward” (JWF). The deal declared that the EU could deport Afghan asylum seekers in unlimited numbers, and Afghanistan would accept them back.

Many Afghan and international migrant rights activists and human rights groups have blasted the deal as a secret backroom agreement forced by a strong government upon a weak one.

Human rights groups and activists have alleged the JWF deal is the result of ​“blackmail.” They claim, based on a leaked memo, that the EU pressured Afghanistan to accept deportees in exchange for a $15.2 billion aid package.

By recategorizing many Afghans fleeing their homeland from ​“refugees” to ​“economic migrants,” the EU is able to circumvent international laws on the rights of refugees. The EU also claims that many areas in Afghanistan are secure and ​“safe” for deported Afghans to return to.

All of this seems out of touch with the reality: 2016 has been the bloodiest year on record for civilians since the 2001 U.S./NATO occupation began. This year has seen a 15 percent increase over last year in child injuries and deaths, while Afghan security forces have suffered at least 15,000 casualties.

The JWF deal states that it will provide ​“a dignified return” to Afghanistan. But it fails to mention the at least 1.2 million Afghans already displaced inside Afghanistan — who live in camps that are anything but dignified, camps that show the conditions to which the poorest and most vulnerable of the EU’s deportees are likely to return.

The number of internally displaced people (IDPs) in Afghanistan is growing rapidly due in part to heavy fighting between government forces — backed by U.S. air power — and the Taliban in Kunduz, Uruzgan, Helmand, Farah and Faryab provinces, resulting in over 450,000 displaced this year according to the U.N. Office for the Coordination of Humanitarian Affairs (UN-OCHA).

Displaced Afghans living in neighboring Iran and Pakistan, who have reportedly faced police violence, arbitrary arrests and harassment, are also being forced back into Afghanistan. Pakistani authorities have given a deadline of March 2017 for all of the approximately three million Afghans living in Pakistan to leave the country.

So far this year roughly 400,000 Afghans have crossed the Torkham border from Pakistan back into Afghanistan.

This has also contributed to the growth of Afghanistan’s IDP populations, and new IDP camps are popping up throughout the country.

Although some are government-sanctioned, many camps in Afghanistan are considered illegal settlements and face constant harassment from private citizens claiming ownership over the land as well as from local authorities threatening to force everyone off the encampments.

Ismail, age 40 (who, like many of the displaced people In These Times spoke with, did not give a last name), is the current ​“Malik,” or head, of Charahi Qambar camp, the largest IDP camp in Afghanistan’s capital of Kabul. He says that with little to no support coming from the Afghan central government, the population of the camp has been left to fend for themselves. 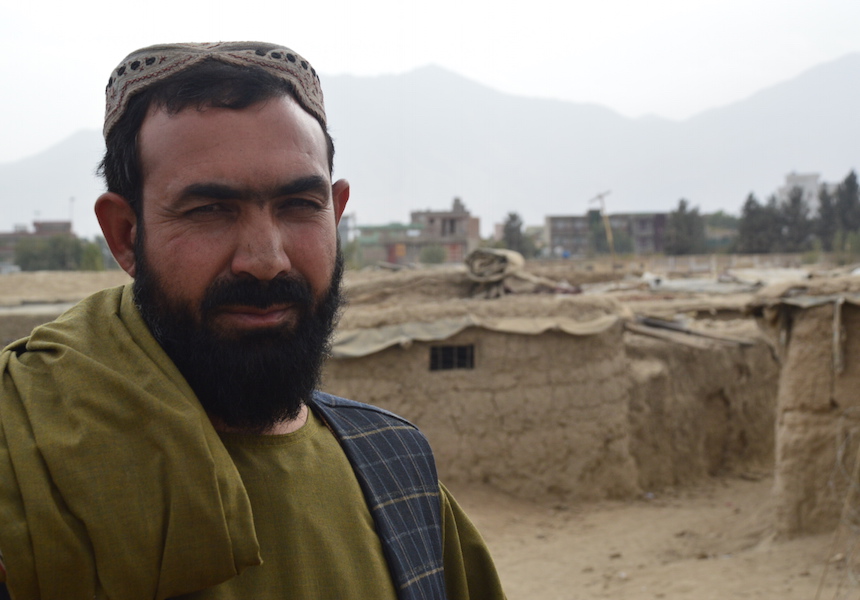 “During [former President Hamid] Karzai’s government,” Ismail says, U.N. aid agencies and the Afghan Ministry of Refugees and Repatriations (MoRR) at least provied some support. “[They] came to visit us several times. They would ask how we were doing and gave us some basic supplies.”

But, he says, it wasn’t enough.

They gave out a total of 950 cards to Charahi Qambar, camp residents remember, each with a 4,000 Afghani allowance (roughly $60 USD), despite Ismail’s estimate that there are up to 1,350 households.

“We could buy basic goods at nearby stores with cards, but the store owners would overcharge us,” Ismail says.

This 4,000 Afghani allowance — which lasted households no more than a few weeks, camp residents tell In These Times—was given once a year, several times under the Karzai government, which lasted until September 2014. ​“But now,” Ismail says, ​“under [current President Ashraf] Ghani nobody has come to help us. When they do come, it’s to threaten us to leave the land.”

This aligns with broader trends identified in a May 2016 Amnesty International report, finding that food aid for Afghanistan’s IDPs is ​“usually sporadic and ad hoc,” that IDPs report decreased aid in recent years and that much of what U.N. agencies do give to the Afghan government does not get delivered to IDPs due to MoRR corruption

The MoRR and U.N.-OCHA have not replied to requests for comment.

Violence from All Sides

Charahi Qambar camp lies on the outskirts of Kabul city and residents estimate it houses anywhere from 4,000 to 9,000 displaced Afghans in between 950 and 1350 mud houses and tent structures. The camp is approximately nine years old, according to its residents, and was founded by people driven out of Helmand and Uruzgan provinces by fighting between the Taliban and the government.

Most camp residents fled with nothing but their lives, having witnessed or suffered violence and abuse from all sides — the Taliban, the Afghan National Army and the U.S. military. Take, as examples:

Many residents in the camp allege that, back in Helmand during the fighting, the Afghan National Army would routinely arrest them on unfounded suspensions of being Taliban members. Camp residents complain of beatings and arbitrary detentions — sometimes, they allege, being locked away for months or years until authorities were satisfied they were a ​“non-combatant.” 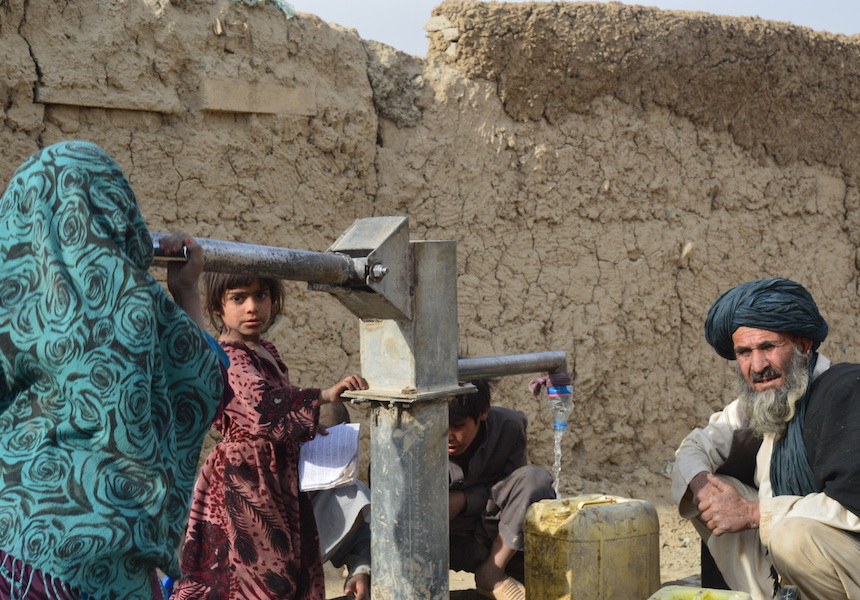 Water from a well in Charahi Qambar camp. (Photo by Mohammed Harun Arsalai)

On the other side of Kabul, just east of the city in the Bagrami district, is Pole Sheena camp. The camp, residents say, is home to an estimated 80 houses occupied by 400 people. This makes it much smaller than the other camps in Kabul; it’s broken into little pieces by towering 3- or 4-story homes, between which IDPs have set up in empty lots. Most of Pole Sheena’s residents had at one point been refugees living in Pakistan, but many returned to Afghanistan after being harassed, beaten and jailed by Pakistani authorities.

“They started by tearing down the [Pakistani] camps, so we’d move,” says Khwaja, a 30-year-old Pole Sheena resident. ​“Then they would come and ask for documents that we didn’t have and beat and arrest us. When one of us would finally be bailed out, we’d find out that our brother or cousin was arrested while we were in jail and we’d have to then find money to bail them out as well.”

Others in the camp claimed that they had only received outside assistance once, in the six years that the camp has existed.

“If you’re going to invite people back from Pakistan, you should at least have prepared tea for them,” exclaims one elderly camp resident.

“You see these kids?” he continues as he pulls little children towards him who had gathered around. ​“Do these kids need anything? Aren’t these children going to want something?”

One of the children pulled forward is 8-year-old Farida Jan, who is missing an arm. She says she doesn’t remember what happened because she was too young, but others in the camp say her arm was severed by shrapnel from a mine or IED. 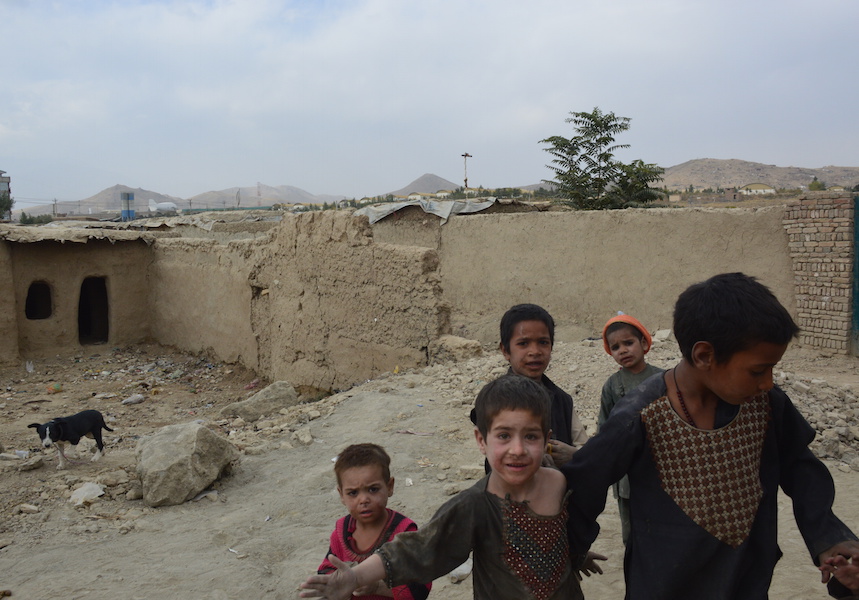 All indicators point to a worsening security situation in Afghanistan: Another recent Taliban takeover of Kunduz; the near fall of Faryab and Farah provinces; heavy fighting between the Taliban and Afghan security forces continues in Helmand; the Islamic State’s growing presence throughout the country.

The leaked document also reveals the EU rationale for pushing the JWF deal: an expected massive wave of Afghan migration to Europe in the near future due to the ​“deteriorating” economic and military situation in Afghanistan as well as mass expulsions from Iran and especially Pakistan.

Out of apparent frustration with the JWF agreement, Minister Sayed Hussain Alimi Balkhi of Afghanistan’s MoRR refused to sign the deal. This gesture was only symbolic, however, as the deputy minister then signed for him.

Many Afghan and international migrant rights activists and human rights groups have blasted the deal as a secret backroom agreement forced by a strong government upon a weak one.

Amnesty International, in response to the deal, said that making development aid contingent on accepting deportees is ​“an absolute disgrace.”

In Kabul, Afghan civil society activists have begun organizing against the JWF, and are demanding the deal not be implemented. Activists called the agreement ​“undemocratic” for never being discussed or debated before implementation.

Frontex, the EU’s border agency, is expected to carry out the deportations, many of which are expected to be involuntary. Frontex has been accused of brutality towards migrants, and their involvement is another aspect of the JWF deal singled out by Afghan civil society activists.

Meanwhile, President Ghani has been widely criticized for not doing enough to support Afghan asylum seekers. In a BBC interview in March of this year Ghani said he has ​“no sympathy” for those fleeing his country.

The millions of Afghans expected to be forced back into Afghanistan during this highly volatile and insecure time will undoubtedly add to the boom in the number of IDP camps and their populations, and further an already disastrous humanitarian crisis. It’s unclear how IDP camps will cope with the new arrivals, especially given the already poor conditions for current residents. 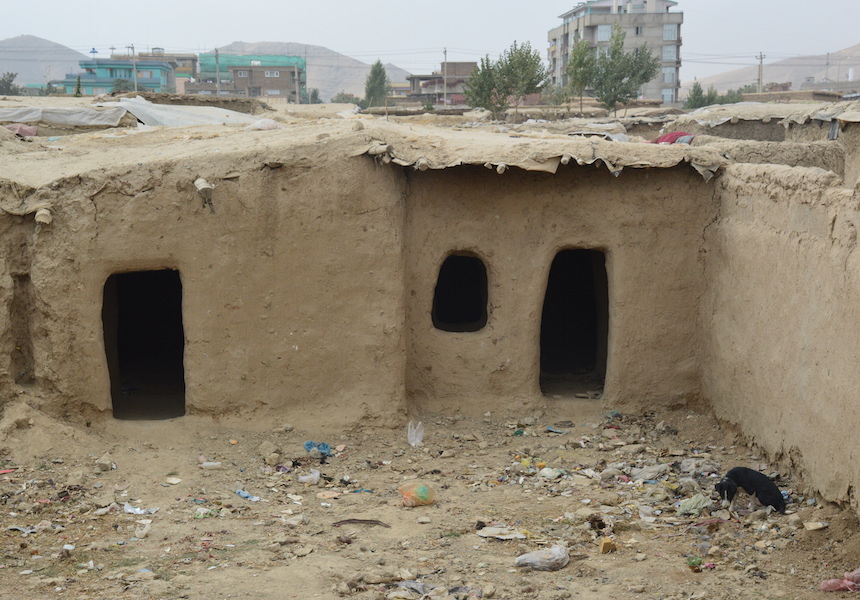 Stuck with no alternatives, already desperate and tired of waiting years for a solution after 9 years, Malik Ismail of the Charahi Qambar camp makes his position and the position of those residing inside the camp clear:

“We’re not leaving here until 1,000 or 2,000 or 3,000 or whatever number of us are here are all given housing: the elderly, children, women, men. … Until then, we are not leaving under any circumstances — they will have to kill us and our children before we leave.”

Get your copy
Mohammed Harun Arsalai is an independent journalist based in Afghanistan. Follow him on Twitter: @ArsalaiH.
Have thoughts or reactions to this or any other piece that you'd like to share? Send us a note with the Letter to the Editor form.
Similar articles
Feature
A Ballot “Blank-Out” Is Not a Strategy for Black Power
The Black electorate needs to think far beyond November 8—and to lead the progressive electoral movement.
Bill Fletcher, Jr.
Feature
How the U.S. Government Is Helping Corporations Plunder Native Land
The Bureau of Indian Affairs is charged with protecting Native interests. Instead, it's letting corporations grab their land for pennies.
Stephanie Woodard
Feature
Bernie-or-Bust Is Real and Probably Not Going Away Anytime Soon
The DNC is shaking up to be a wild experiment in democracy.
Kate Aronoff
Join our newsletter
Fearless journalism, emailed straight to you.
Subscribe and Save 59%