The United States is in an agricultural bind. Farmers are retiring at alarming rates, profits are down, and starting a new small farm takes guts and money. The next generation faces mounting debt and a lack of affordable farmland, but also inherits a growing public weariness of dominant production models that rely on ecological shortsightedness to keep bad food cheap.

With or without the infrastructure in place, there is demand for healthy food that doesn’t require a war on nature to produce. New farmers are rising to the challenge, but they need all the support they can get.

The Stone Barns Center for Food and Agriculture, in Terrytown, N.Y., is a non-profit organization working to promote sustainable, community-based food production. This includes operating a farm, CSA, restaurant and educational resource center that’s open to the public. Last month, the Center released Letters to a Young Farmer—an anthology of essays and letters by influential farmers, writers, and leaders in the sustainable food movement. Writing to inspire the next generation of farmers, contributors include Barbara Kingsolver, Bill McKibben, Michael Pollan, Dan Barber, Temple Grandin, Wendell Berry, Rick Bayless, Marion Nestle and 24 others.

In the following interview Danielle Nierenberg, the president of Food Tank and an expert on food issues, speaks with Stone Barns Center CEO Jill Isenbarger about the book and why it’s important:

The United States is on the cusp of the largest retirement of farmers in U.S. history, with more farmers over the age of 75 than between the ages of 35 and 44. Letters to a Young Farmer aims to help beginning farmers succeed through advice and encouragement, while inspiring all who work in or care about the food system.

Food Tank spoke with Isenbarger, who says, ​“We created this book to give voice to farmers and illuminate the choices that can lead to a stronger future, for them and for all of us who eat. It reminds us that farming has always been a political act. These young farmers, who choose to farm rather than go into law or medicine or finance — they are taking a stand; they are expressing their commitment to the land, to their communities, to the food movement.”

Farmers are becoming an endangered species. The number of farms and farmers continues to shrink, and farmers are aging off of the land at an alarming rate. The average age of a farmer in the United States is 58.3 and climbing, and only six percent of farmers are under the age of 35.

Young farmers need encouragement because our society doesn’t value them the way they should be valued. ​“You’re just a farmer” is the common refrain. Barbara Kingsolver, Wendell Berry, and Bill McKibben all write about this in the book. We’ve also lost many agricultural traditions based on community, a common history of stewardship and hard work.

To support the kind of dignified labor and environmentally sound land stewardship that will help us create a more sustainable farming system, we simply may have to pay more for our food. According to the USDA, in 1960, Americans spent 17.5 percent of their income on food. By 2013, that had dropped to 9.9 percent. As a country, we’ve grown accustomed to cheap food — food that is not only inexpensive, but food that doesn’t taste good and isn’t good for us. Paying more for quality, nutritious food (and helping those of lesser means gain access to it), grown by farmers able to earn a living wage and provide health care to their workers — that would go a long way to helping raise us all up.

Bill McKibben writes about surviving the ​“carbon binge,” and the challenges that a changing climate will bring to farmers who grow our food. Marry this with the challenges of finding affordable land to farm, paying off student loans, the dearth of start-up capital and a lack of regional agricultural infrastructure in some parts of the country, and you have a daunting set of obstacles that most young farmers face.

It is hopeful to note that H.R. 1060, the Young Farmer Success Act, a bipartisan bill sponsored by Rep. Joe Courtney (D‑CT), Rep. Glenn Thompson (R‑PA), and Rep. John Faso (R‑NY), was reintroduced in the House of Representatives in February. This bill will help provide college loan relief to young farmers. So, some in Congress are paying attention, especially among them Rep. Chellie Pingree (D‑ME), herself a contributor to our book.

What are some of the most important areas for young farmers to focus their skills?

One is soil health, the very foundation of sustainable agriculture. There’s a saying, ​“civilizations rise or fall on the health of soil.” Farming with nature is the key; farming that builds up soil, uses water wisely and with an eye on the future — we absolutely need more of this. Wes Jackson talks about this in his letter: ​“Ecological agriculture has the disciplines of ecology and evolutionary biology to call on, based on millions of years of emerging efficiencies such as those seen in nature’s prairie ecosystems.”

At Stone Barns Center, we focus on two aspects of building soil health: one is through farming, and we teach and experiment with agroecology. The other is the concept of creating what we call a farm-driven cuisine in America — catalyzing a culture of eating based on what ecosystems, including farms and their soils, need to be healthy and regenerative.

Young farmers need to focus not just on the practical skills to grow, harvest, and sell their products; they also need to focus on building strong connections to their communities, sharing their deep love of land and place, and helping people understand the value and importance of farming done well.

Which letters inspired you the most?

So many of the letters and essays are extraordinary and inspiring and deeply moving. They flow with humor and insight, gratitude and humility. I love the wry wit of Barbara Damrosch, Mary Berry, Bill McKibben, and Gary Nabhan, and the lyrical insights of Raj Patel and Barbara Kingsolver. I was drawn to Amy Halloran’s line, ​“Eating is hunting in nature for food.” It pulls you back to the bond that we need to have with the earth. It is primal. I appreciate Wendy Millet’s articulation of her ​“hundred years” value, the idea of taking a long-term perspective on economically and ecologically sustainable management.

What were the most common themes you found in the letters?

There are many overlapping ideas that ripple out in their own ways, but these are a few themes that arose in a number of the essays and letters:

What have farmers’ reactions been to the book?

“When are you putting together the next book? I want to write a piece.” This has been a heartening response. Sharing the stories about the people who grow our food and steward our lands and waters is powerful and important. Farmers are a hearty, optimistic, and determined breed. To have received their support and encouragement is a great honor and means that we are advancing our mission in an important and meaningful way.

(This interview was originally published on Food Tank and is reposted with permission.) 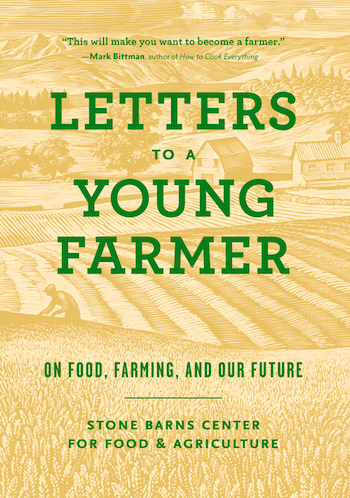 Stone Barns Center for Food and Agriculture is a nonprofit sustainable agriculture organization with a mission to create a healthy and sustainable food system that benefits all. The organization trains farmers, educates food citizens, develops agroecological farming practices, and convenes changemakers through programs such as a Summer Institute for High School Students and a two-day Poultry School conference. Letters to a Young Farmer is their first book.

Support In These Times
This blog’s mission is to provide the public service of helping make the issues that rural America is grappling with part of national discourse.
Have thoughts or reactions to this or any other piece that you'd like to share? Send us a note with the Letter to the Editor form.
More articles by Rural America In These Times
ViewpointRural America
Dear Congress: Say No to Water Privatization in the Infrastructure Bill
Water costs have soared in recent years as federal funding for water infrastructure has shrunk. Privatization is the last thing we need.
Rural America
An Open Letter to Biden from Indigenous Peoples
Trump wrecked the relationship between the U.S. government and Native nations. Here's how the Biden Administration can repair this damage.
Rural America
In Less Than One Generation, We’ve Lost More Than 10 Million Acres of the Best U.S. Farmland
Similar articles
Rural America
The Curious Case of Carter County: How a Small Town in Montana Stopped Shrinking
On the Great Plains, these days, rural towns tend to wither. But in remote eastern Montana, one community is bucking that trend. How?
Eric Dietrich
Rural America
Study: “Salmon Remain on the Brink of Extinction. And Time Is Running Out.”
Between dams and warming waters, West Coast populations of wild salmon have plunged by 98%. What will it take to stop the decline?
Tara Lohan
Rural America
The EPA Responded to a Respiratory Virus by Relaxing Pollution Controls
Major polluters were deemed 'essential.' Under EPA policy, environmental and safety inspectors were not.
Victor B. Flatt and Joel A. Mintz
Join our newsletter
Fearless journalism, emailed straight to you.
Subscribe and Save 66%