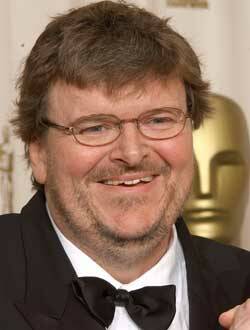 Michael Moore: “I’m an American, and you don’t leave your citizenship when you enter the doors of the Kodak Theatre. ... I don’t stop being who I am when I come to this ceremony, and I’m extremely grateful for this response.”

Share Tweet Copy Link Email Print
Published in
April 14, 2003
On day five of the war, it was supremely ironic that network television viewers had to tune into the 75th Annual Academy Awards ceremony to hear voices that questioned the wisdom of the Bush administration.

Rumblings of protest began on Saturday. At the Independent Spirit Awards (the award ceremony for independent films) in Santa Monica, California, Maggie Gyllenhaal, the star of Secretary, said the country was “in the middle of a war about oil and imperialism and I hope for peace as soon as we can possibly find it.”

That same afternoon at the Miramax party, crooner Michael Feinstein couldn’t rouse the guests to sing “God Bless America” no matter how hard he tried.

Then there was ABC’s presentation of the Academy Awards on Sunday night. Steve Martin got the ball rolling: “I am really glad they cut back on the red carpet, that’ll send them a message.” Minutes later, he followed up with, “A movie star is many things: they can be tall, short, thin … or skinny. They can be Democrats … or skinny.”

The political statements ranged from the subdued to the outraged. Susan Sarandon, like many others wearing the Dove of Peace pins designed by Henry Dunay for Global Vision for Peace, flashed a peace sign. Chris Cooper, winner of the best supporting actor for his role in Adaptation, quietly said, “In light of all the troubles in this world, I wish us peace.”

Gael Garcia Bernal, the hunky star of Y Tu Mama Tambien, introducing the nominated best song from Frida, said to loud applause: “The necessity for peace in the world is not a dream, it is a reality. And we are not alone. If Frida was alive, she would be on our side, against war.”

Pedro Almodovar, accepting the Oscar for best original screenplay for Talk to Her, read a statement: “I also want to dedicate this award to all the people who are raising their voices in favor of peace, respect of human rights, democracy and international legality, all of which are essential qualities [for life].”

And the audience cheered as Adrien Brody, who won best actor for The Pianist, admonished the orchestra to stop so he could say, “Whether you believe in Allah or God, may he watch over you, and pray for a peaceful and swift resolution to this war.”

In a veiled protest against the war, which went totally unreported, Bono, lead singer of U2, sang “The Hands that Built America” from Gangs of New York, changing two lines of the song:

It’s early fall, there is a cloud on the New York skyline,
Innocents across a yellow line.

Late in the spring, yellow cloud on a desert skyline,
Some father’s son, is it his or is it mine.

And then there was Michael Moore. He received a standing ovation when Bowling for Columbine was announced the winner of best documentary. The Chicago Tribune’s Mark Caro reported that the pressroom also erupted in applause when it was announced that Moore had won.

I’ve invited my fellow documentary nominees on the stage with us. They are here in solidarity with me because we like nonfiction. We like nonfiction and we live in fictitious times. We live in the time when we have fictitious election results that elect a fictitious president. We live in a time where we have a man sending us to war for fictitious reasons, whether it is the fiction of duct tape or the fiction of orange alerts. We are against this war, Mr. Bush. Shame on you, Mr. Bush. Shame on you. And any time that you have the Pope and the Dixie Chicks against you, your time is up.

John Horn of the Los Angeles Times reported that “as Moore’s speech reached its crescendo” Oscar producer Gil Cates and director Louis Horvitz, who were in the production truck, decided “to cut him off. ‘Music! Music!’ Horvitz yelled. The orchestra quickly drowned out the rest of Moore’s speech.” And his microphone receded into the floor.

Most of the Hollywood audience smiled and applauded, but stagehands, who were close to the microphones, booed loudly, making it appear to a television listener that Moore’s criticism of President Bush was not well received.

“It was so sweet backstage, you should have seen it. The Teamsters are helping Michael Moore into the trunk of his limo,” quipped Steve Martin after a commercial break.

Backstage, Moore kept up his criticism. These remarks were well reported by the Tribune’s Mark Caro and the Chicago Sun-Times Bill Zwecker, but most of the national media ignored them.

Reporter: Why did you do what you did?
Moore: I’m an American.
Reporter: That’s it?
Moore: Well that’s a lot. I’m an American, and you don’t leave your citizenship when you enter the doors of the Kodak Theatre. … I don’t stop being who I am when I come to this ceremony, and I’m extremely grateful for this response.

Moore wanted it made clear that despite the loud boos from the stagehands, the Hollywood audience was behind him: “Don’t report that there was a split decision in the hall because five people booed,” he said. “I did not hear that. I saw the entire place stand up and applaud, applaud a film that talks about how we are manipulated by the fear that’s put forth by the White House and put forth by corporate America to create a culture of violence at home and abroad.”

Noting that his book Stupid White Men is on the nonfiction bestseller list, Moore said, “My finger’s on the pulse of where I think the majority of Americans are at, and I think it would be irresponsible of me not to say what I felt. I don’t think anyone who voted for me for this award thought they’d get a speech about agents and lawyers or the lawyers of agents.” America, he said, is “not divided … the majority of Americans do not want to see their boys or girls killed in this war. The majority of people do not want to see our democracy hijacked by the squatter on federal land at 1600 Pennsylvania. I just happen to believe in one person, one vote, and you count all the votes.”

Naturally, the national media, which have been busy as wartime cheerleaders, falsely reported that Moore was not well received. Kurt Loder of MTV’s report on Michael Moore’s “witless flip-out” was typical. Loder wrote: “Moore brought all of the losing nominees in his category up onstage with him as a show of ‘solidarity.’ (Uh oh.) He then launched into a raving denunciation of ‘our fictitious president,’ which … okay, a lot of people feel this way. But Moore’s spittle-flecked undulations were so over-the-top, that even the Oscar crowd—his natural constituency, you might think—erupted in a storm of boos. This was totally unexpected.”

Are Loder et al softening us up for another Hollywood blacklist? Boycott Hollywood already wants to dim the lights of 94 outspoken stars.

A statement released by the Screen Actors Guild, earlier in the month, put it this way: “Some have recently suggested that well-known individuals who express ‘unacceptable’ views should be punished by losing their right to work. This shocking development suggests that the lessons of history have, for some, fallen on deaf ears.”

The furor over Moore’s comments will no doubt continue. We should remember the words of Barbara Streisand, who said, “I am glad that I live in a country that guarantees every citizen, including artists, the right to say and to sing what you believe.” In a culture where the Dixie Chicks are being blacklisted, it was an affirmation that needed to be made.

Joel Blei­fuss, a for­mer direc­tor of the Peace Stud­ies Pro­gram at the Uni­ver­si­ty of Mis­souri-Colum­bia, is the edi­tor & pub­lish­er of In These Times, where he has worked since Octo­ber 1986.

Have thoughts or reactions to this or any other piece that you'd like to share? Send us a note with the Letter to the Editor form.
More articles by Joel Bleifuss
Viewpoint
Sorry Joe, Countries Don't Have Souls
Joe Biden has framed the election as a battle for “America’s soul.” But what we need are politicians who will fight for the material needs of the people.
Culture
Trump’s False Claims of Rampant Voter Fraud Draw From a Well-worn Racist Playbook
Republicans have tried to suppress turnout among voters who are poor, disabled or people of color for many years.
Viewpoint
Stop Blaming Individuals for the Spread of Covid and Start Blaming the Government Response
By presenting collective, structural crises as separate, individual problems with separate, individualized solutions, the government abdicates its responsibility to meaningfully intervene.
Similar articles
Feature
When ‘It’s a Wonderful Life’ Was Accused of Being Communist Propaganda
When the movie first came out, it fell under suspicion from the FBI and the House Un-American Activities Committee (HUAC).
Michael Winship
Feature
Journalists Aren’t Covering Local Elections. Our Democracy Is Suffering Because of It.
What if you held an election and nobody showed up to cover it? Americans now know the answer: elections with lots of paid ads but little journalism, context or objective facts.
David Sirota
Feature
Fracking to Cure Breast Cancer
Why is the Susan G. Komen Foundation partnering with a major fossil fuels company?
David Sirota
Subscribe to our free newsletter
Fearless journalism that speaks truth to power
Limited Time: