“Privatization is not the solution”: Michigan Activists Fight for Water Justice

A six-day march from Detroit to Flint by a coalition of community organizations recently protested issues of water justice facing Michigan residents.

On July 3, dozens of Michigan activists convened in Detroit to begin a march to demand water justice in the state. The six-day march covered 70 miles as organizers walked from Detroit to Flint and continued by bus to the state capitol in Lansing, stopping in five other Michigan cities along the way. The action was called by The Peoples’ Water Board, a coalition of 30 community organizations including labor unions, racial justice organizations, religious congregations, human rights groups and environmental activists.

While the water shutoffs in Detroit have been the most publicized aspect of the Michigan water crisis, activists explained that access to water is problem plaguing the entire state of Michigan.

Activists gave rousing testimonies at a speak-out that opened the week-long event. Clergy from both Christian and Jewish faiths gave opening blessings to the marchers. Rabbi Alana Alpert of Detroit Jews for Justice hoped that the action would bring ​“not just a trickle, but a downpour” of clean, affordable water to the residents of Michigan. A spiritual ritual was lead by representatives of Indigenous Water Women, who noted the importance of water not only to urban residents but to struggles for indigenous rights. 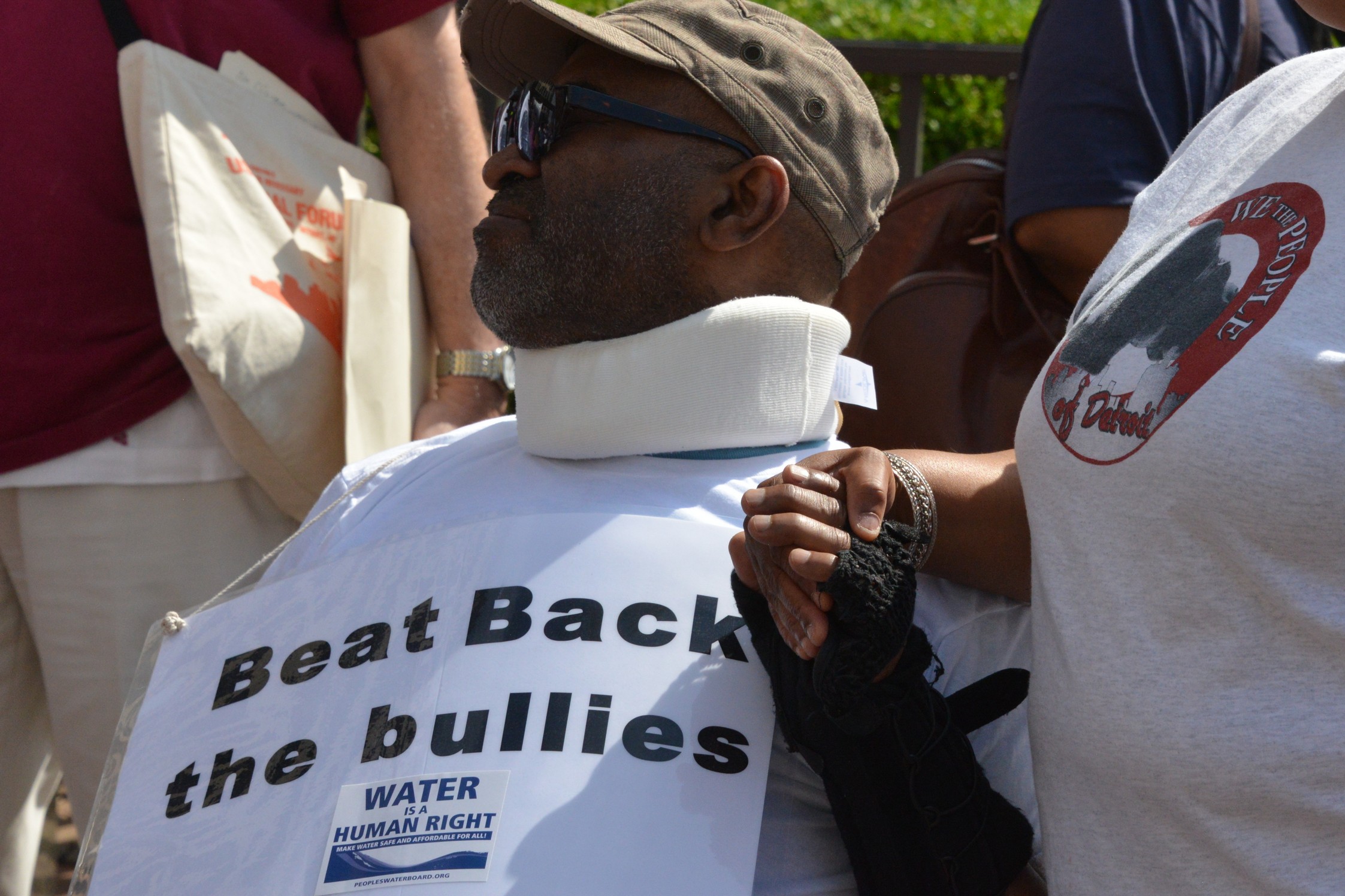 Holding signs that read ​“Water is a Human Right,” protesters called attention to the dire situation facing those who lack consistent access to clean water. Last year, the United Nations found that the Detroit water shutoffs constituted a violation of human rights and urged policy makers to cease and desist immediately. ​“Disconnection of water services because of failure to pay due to lack of means constitutes a violation of the human right to water and other international human rights,” U.N. officials Catarina de Albuquerque, Leilani Farha and Philip Alston wrote.

Mayor Mike Duggan is proceeding with the shutoff orders over the wishes of city council members, who voted on May 12 to freeze the shutoff until an assistance plan to help affected residents was enacted. As of May, 64,769 were at risk for water shutoffs.

Maureen Taylor, of the Michigan Welfare Rights Organization, reminded the crowd that the Detroit City Council passed an income-based payment plan in 2006; the plan would set water rates at 2%-3% of residents’ income. Nearly a decade later, the Water Affordability Plan still has yet to be implemented.

While the water shutoffs in Detroit have been the most publicized aspect of the Michigan water crisis, activists explained that access to water is problem plaguing the entire state of Michigan. ​“The purpose of this walk really is to call for clean and affordable water for all of Michigan,” Kim Redigan, one of the organizers of the event, said.

Organizers from Flint held up bottles containing brown and yellow water that city and state officials insist is safe for human consumption. Residents of Flint have received repeated notices over the last year that the water coming from the Flint River was in violation of the Safe Water Drinking Act. A new round of tests concluded on June 1, 2015, that the city of Flint was currently safe, but that levels of trihalomethanes in the water were so high in 2014 that the city was still in violation of the Act. 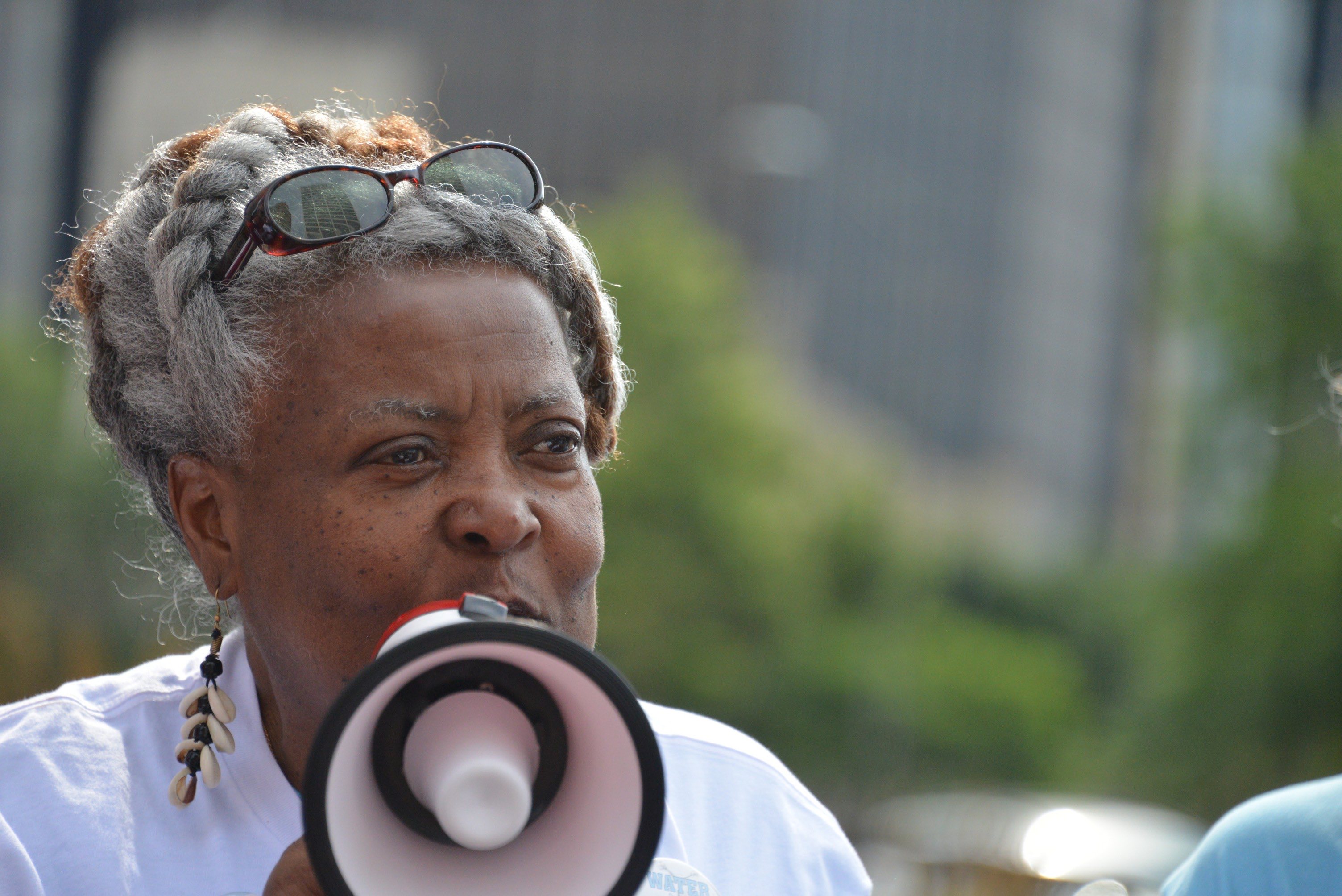 Members of nurses union National Nurses United were present at the rally, describing the health complications that have arisen from Michigan residents’ contact with contaminated water. They relayed accounts of residents contracting autoimmune disorders, skin lesions, copper and lead poisoning, among other ailments. Consuming increased levels of trihalomethanes can lead to liver, kidney, and central nervous system problems, as well as increasing the risk of various forms of cancer, according to the Environmental Protection Agency.

Activist and student Nadia Gaber said that the struggle over water was not limited to Michigan. ​“Water is emerging as a national terrain of struggle” she said, drawing comparisons between the situation in Detroit to the drought in California and the water shutoffs in Baltimore.

Chants of ​“Whose Water? Our Water!” were interspersed with discussions about potential plans to privatize water in the state, which protesters from both Detroit and Flint repeatedly critiqued. Activists made frequent reference to a report released last year by Corporate Accountability International that shows that, on average, privatization leads to higher costs and lower efficiency. ​“Privatization is not the solution,” Redigan said. 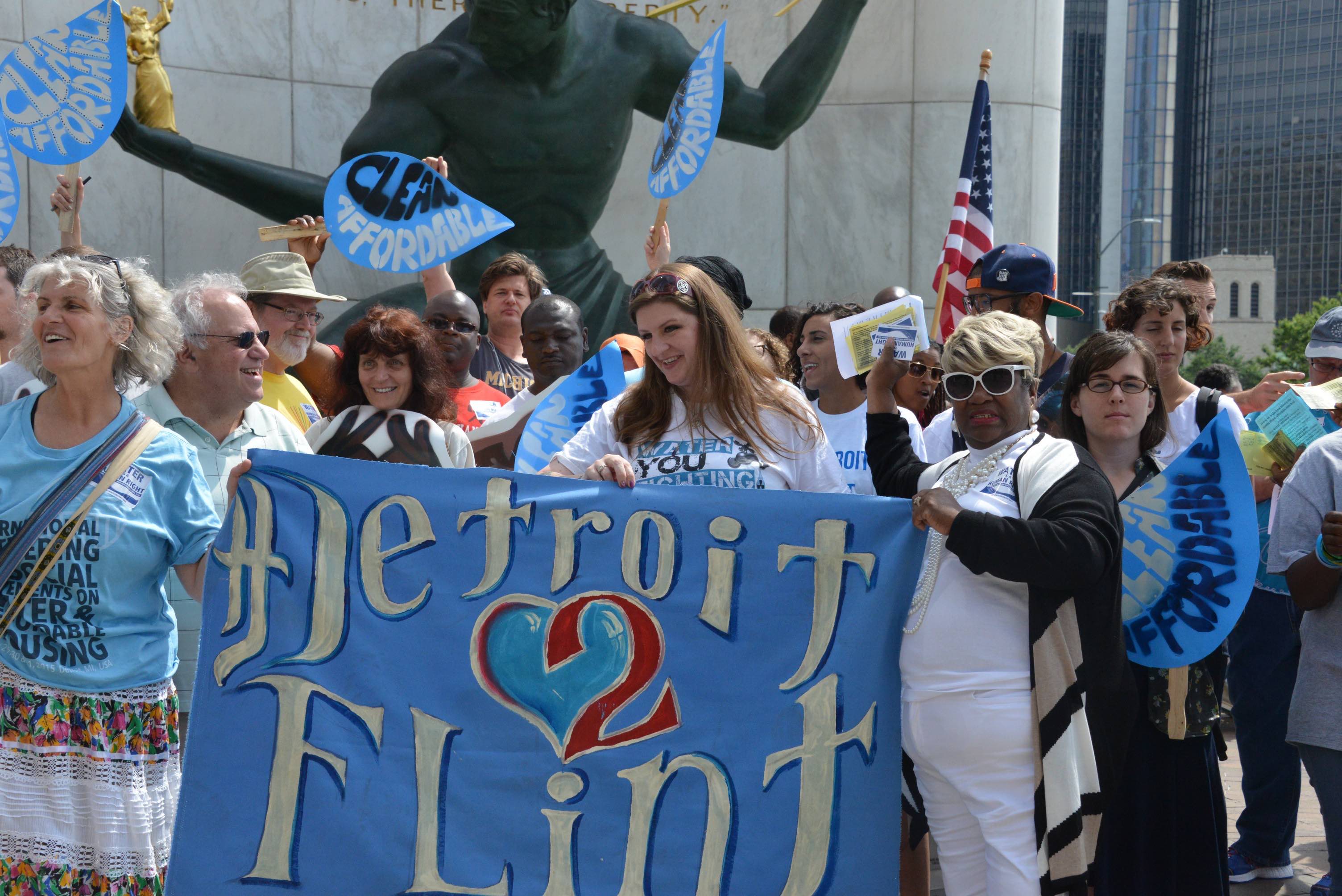 Monica Lewis-Patrick, one of the co-founders of We the People of Detroit, a coalition member of the People’s Water Board, said ​“the historical racial divide between Detroit and the rest of the state has lead to a narrative of us, the residents of Detroit, of being irresponsible governors, of being lazy, of being incapable of leading ourselves — all of that has been displaced onto the struggle over water.”

Despite the severity of the crisis, activists remained hopeful about the waves of protest and community action that has cropped up around the state over the last year. Speakers recounted instances of community solidarity in response to the water shutoffs that have plagued the city for over a year. Many told stories of neighbors allowing others to use their showers, routing hoses between houses and doing each others’ laundry.

Lewis-Patrick said that activists’ hope stemmed from ​“the extreme diversity of our coalition, the volume of the voices of progressive thinkers that understand that water is a human right. The exciting part amidst these austerity laws [is that] you are still seeing the belovedness of Detroit, the love of people playing out by helping each other, seeing ourselves as part of the global struggle for the protection of the human right to water.”

Get your copy
Ashley Bohrer is an academic and activist based in Chicago. She is a member of the HYSTERIA editorial collective, a contributing editor for Red Wedge Magazine and has published at Truthout and Al Jazeera America.
Have thoughts or reactions to this or any other piece that you'd like to share? Send us a note with the Letter to the Editor form.
Similar articles
Feature
Resister’s Digest: Bernie Sanders Launches “Fight Back” Tour Against Trumpism
The senator hopes to build a Democratic party that is strong in all 50 states.
Theo Anderson
Feature
Knowing What’s Nice
Kurt Vonnegut
Feature
Decisions, Decisions
As labor ponders which Democrat to endorse, it also girds for battle against the GOP in ‘04
David Moberg
Join our newsletter
Fearless journalism, emailed straight to you.
Subscribe and Save 59%