Competing with Petroleum by 2010: An Official U.S. Energy Report from 1989

In 1978, Jimmy Carter launched the Aquatic Species Program — an effort funded by the newly established Department of Energy (DOE) to research renewable fuels for transportation. Operating under the Solar Energy Research Institute (SERI), which later became the National Renewable Energy Laboratory (NREL), the project focused on producing fuel from microalgae.

Algae biofuels, unlike crop-based ethanol, were (and remain) especially promising because production doesn’t require farmland or fresh water. Under the Reagan administration, the NREL’s funding was drastically cut and the Aquatic Species Program was officially eliminated in 1996.

The following selection from the ​“Aquatic Species Program Annual Report,” prepared in 1989 for the Department of Energy by the Solar Energy Research Institute, suggests oil from microalgae could be competitive with petroleum by 2010:

When stimulated by environmental stress, many species of aquatic microalgae produce lipids, or oils, that can be processed into diesel oil or gasoline. These algae have growth rates as high as five times those of most terrestrial plants, and some species flourish in saline or brackish water unsuitable for human.or traditional agricultural use. In addition, microalgae require large quantities of carbon dioxide for growth and lipid production, offering a way to mitigate increases in the concentration of atmospheric carbon dioxide, a major greenhouse gas. The Aquatic Species Program, funded by the Department of Energy and managed by the Solar Energy Research Institute, was designed to take advantage of these attributes.

The overall goal of the program is to provide the technology base for the cost effective production of diesel fuel from microalgae by the year 2010. The specific objectives are to identify or develop strains and culture (growth) requirements for high biomass and lipid production under fluctuating outdoor conditions, to develop design criteria for large scale culture systems, and to develop efficient harvesting, handling and conversion methods. Moreover, since the first applications of this technology are most likely to occur in the U. S. southwest where there are high levels of solar radiation, a large land base, and an inexpensive water source (saline), the research is driven by the conditions found in this area.

Significant progress has been made since the program focused exclusively on the production of fuels from microalgae in 1982. More than 3000 strains collected from desert and saline environments have been studied, resulting in the selection of numerous strains for improvement or development research. The strains selected grow over a wide range of salinities, produce significant quantities of lipid oils and achieve growth rates of nearly three doublings per day. Some of these strains can tolerate freezing temperatures and some as high as 100 degrees (F) or higher.

The most promising of these algal strains are maintained in a culture collection at SERI. This is the only collection of algae in the country that is focused on oil products for processing to fuels and serves as a resource for the program. However, many of these strains are distributed to industrial users, including shellfish growers and others interested in exploring microalgae for high-value products.

Analyses indicate that economic fuel production will require the microalgae to be grown in intensive culture in large outdoor ponds. The program has established an Outdoor Test Facility (OTF) to evaluate pond designs and to translate laboratory successes in strain development to outdoor conditions. The preliminary design consists of a 6‑m-deep, raceway-shaped pond (0.25 acre) with a paddle wheel to circulate the water and systems for injecting carbon dioxide and other nutrients into the culture. The OTF became fully operational in 1988 and has two of the 0.25-acre ponds.

Recognizing the increased concern with global warming and the fact that large additions of carbon dioxide are required to obtain the production levels required for the technology, SERI has conducted a preliminary analysis coupling microalgae production facilities with power plants in the southwest. The preliminary results are promising and indicate that the carbon dioxide emissions from all the power plants in New Mexico and Arizona could be trapped by microalgae farms covering about 4% of the combined land area of both states. Ongoing analysis will be used to guide and focus the research and to identify opportunities and other potential benefits of the technology.

Research is now focused on applying genetic techniques to enhance the lipid production of microalgae. This effort builds on extensive strain characterization research, as well as biochemical studies of the metabolic pathways for lipid synthesis. Using nongenetic methods, scientists have already improved the lipid content of the cell from the 5%-20% found in nature to more than 60% in the laboratory and 40% in outdoor culture. Recent results suggest that microalgae production goals of 70 dry tons per acre per year and lipid content of 60% can be achieved in outdoor culture. Research results suggest that if these goals are reached, oil produced from microalgae could be competitive with petroleum after the year 2010. 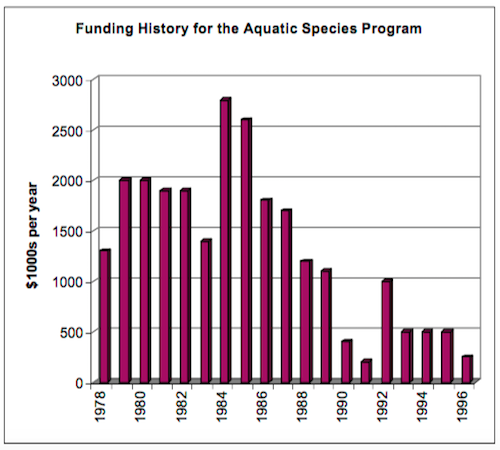 (Source: A Look Back at the U.S. Department of Energy’s Aquatic Species Program: Biodiesal from Algae)

For the full Aquatic Species Progarm Annual Report, prepared for the U.S. Department of Energy in 1989, click here.

Support In These Times
This blog’s mission is to provide the public service of helping make the issues that rural America is grappling with part of national discourse.
Have thoughts or reactions to this or any other piece that you'd like to share? Send us a note with the Letter to the Editor form.
More articles by Rural America In These Times
ViewpointRural America
Dear Congress: Say No to Water Privatization in the Infrastructure Bill
Water costs have soared in recent years as federal funding for water infrastructure has shrunk. Privatization is the last thing we need.
Rural America
An Open Letter to Biden from Indigenous Peoples
Trump wrecked the relationship between the U.S. government and Native nations. Here's how the Biden Administration can repair this damage.
Rural America
In Less Than One Generation, We’ve Lost More Than 10 Million Acres of the Best U.S. Farmland
Similar articles
Rural America
Slaughterhouses Offer Rural Communities Employment but Low Wages
Christopher Walljasper
Rural America
Farm Workers Are Under Attack For Doing a Job that Other Americans Won’t
Ruben Navarrette
Rural America
Can the Community Rights Movement Fix Capitalism?
Thomas Linzey
Join our newsletter
Fearless journalism, emailed straight to you.
Subscribe and Save 66%