On July 17, about 30 Catholic nuns in Lancaster County, Penn., who had constructed an open-air chapel on the proposed path of a natural gas pipeline, went to court to fight efforts by the fossil fuel company trying to seize their land.

About six months ago, they came up with the idea to build the chapel on their farmland as ​“a visible symbol of their commitment to the land,” Mark Clatterbuck, of Lancaster Against Pipelines — which helped build the chapel — told the York Daily Record, a local paper.

“We have to pay reverence to the land God has given us,” says Sister George Ann Biscan. ​“We honor God by protecting and preserving His creation.”

Friday, seeking a federal injunction, the Adorers filed a complaint in the U.S. District Court for the Eastern District of Pennsylvania, claiming the Federal Energy Regulatory Commission (FERC), which regulates interstate natural gas pipelines, and its commissioner have violated the Religious Freedom Restoration Act, ​“by forcing the Adorers to use their land to accommodate a fossil fuel pipeline,” the sisters said in a statement.

The nuns, the statement continued, ​“allege that FERC’s action places a substantial burden on their exercise of religion by taking their land, which they want to protect and preserve as part of their faith, and forces the Adorers to use their land in a manner and for a purpose they believe is harmful to the earth.”

The complaint followed an emergency motion filed by the pipeline’s developer, Tulsa-based Williams Companies, ​“in an attempt to take immediate possession of the property and get permission to deploy U.S. Marshals on the nuns and ​‘any third parties authorized by the sisters to be on the property,’ ” Sojourners reported.

The pipeline, called ​“Atlantic Sunrise,” is slated to stretch across more than 180 miles of central Pennsylvania and link to the company’s Transco pipeline, which carries gas from the Gulf of Mexico to the East Coast. FERC approved the project in February, and Williams began construction in early spring. The company has settled with more than 1,000 landowners impacted by the pipeline, and when attempts to negotiate with Adorers failed, it tried to seize the land through eminent domain.

They’ve said we’re just looking to get more money. We’re not looking for money. We want to preserve this land.

The sisters belong to the Adorers of the Blood of Christ, which was founded in 1834 in the rural mountains of Italy. The order, which has 2,000 members worldwide, with more than 200 in the United States, arrived in nearby Columbia, Penn., in 1925, and acquired 90 acres of farmland, which is now leased to local farmers. The order has made environmental protection a part its mission, and the sisters embroiled in this land battle with Williams exemplify the order’s motto: ​“You will lack nothing if God is with you. Be a woman of great courage.” 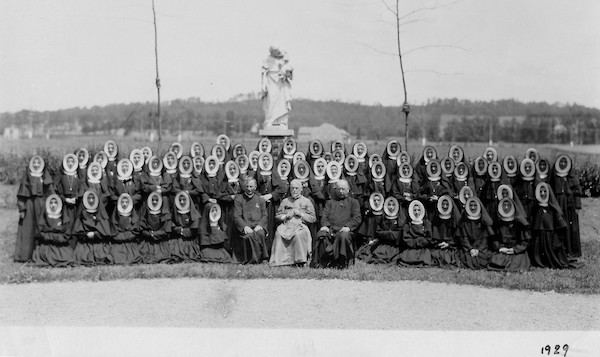 An archived photograph of the Adorers of the Blood of Christ taken in 1929, four years after the order arrived in Columbia, Penn. (Photograph: ador​ers​.org)

Their chapel — nestled in a carved-out section of their cornfield — sits atop a bed of straw, and features an arbor as well as a pulpit composed of wood from fallen trees. Eight benches placed in front of the altar serve as pews. A rope full of colorful solidarity ribbons runs along the chapel’s perimeter. 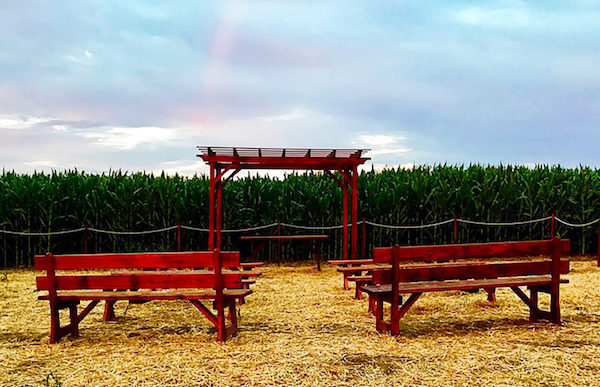 “People can come at any time of the day, and even night if they want to pray and they’re free to walk around, to tie another ribbon on just to let people know that they’ve been here and that they are praying and supporting us,” says Sister Biscan.

One supporter left a homemade wooden birdhouse at the site, with the inscription: ​“One day a family of beautiful choir singers will move in this house to help defend this chapel and to remind you of why you stand strong.”

On July 16, about 100 supporters gathered at the chapel for a public vigil sponsored by Lancaster Against Pipelines, according to local reports. ​“Everyone of good will is invited to join in this vigil as we continue to #StandWithTheSisters against corporate violation of religious, environmental, and community rights,” the group said the previous day. The vigil included a ribbon-tying ceremony, during which attendees added solidarity ribbons to the perimeter rope.

U.S. appeals court judges have ruled inconsistently on whether federal law protects religious groups from eminent domain in such cases. The U.S. Court of Appeals for the 3rd Circuit, which covers Delaware, New Jersey and the part of Pennsylvania where the nuns reside, has yet to issue a ruling on the matter. Legal observers say a case could make its way to the U.S. Supreme Court.

If the injunction is granted, however, it is unclear the degree to which the sisters’ chapel will impact construction of the Atlantic Sunrise pipeline. According to a website managed by the developer, ​“Williams has already incorporated more than 400 route variations into the proposed route to address stakeholder concerns — and we are still making adjustments.”

(“To Block Pipeline, Nuns in Court to Defend Cornfield Chapel” was originally published on com​mon​dreams​.org under a Creative Commons Attribution.)

Jessica Corbett, a former In These Times intern, is a Maine-based staff writer at Common Dreams. Follow her on Twitter at @corbett_jessica.
Have thoughts or reactions to this or any other piece that you'd like to share? Send us a note with the Letter to the Editor form.
More articles by Jessica Corbett
Climate
CO2 Now at Levels Unseen in 3.6 Million Years
Despite pandemic shutdowns, the NOAA warns that carbon dioxide and methane "continued their unrelenting rise in 2020."
Dispatch
“An Essential Procedure”: How Abortion Providers Are Persevering Through the Pandemic
In the face of Covid-19, clinics are continuing to provide safe abortions at a safe distance.
Feature
These Activists Say Sabotaging Pipelines Is Legally Justified Because Humanity Hangs in the Balance
A landmark trial will test the argument that civil disobedience is needed for the greater good.
Similar articles
Rural America
The U.S. Still Uses Dozens of Hazardous Pesticides Banned in Other Countries
Phorate, for example—the “extremely hazardous” insecticide that is most used in the U.S.—is banned in 38 countries, including China, Brazil and India.
Pramod Acharya
Rural America
A Mask Shortage Could Leave Farmers and Farm Workers Exposed to Toxic Pesticides
Melanie Bateman
Rural America
This Oasis Shows the Diverse History of the Mexico Borderlands. Trump’s Wall Threatens to Destroy It
Jared Orsi
Join our newsletter
Fearless journalism, emailed straight to you.
Subscribe and Save 66%