‘To Preserve the Future of Our Past’: Tribes Work for World Heritage Designation of Ohio Earthworks

In October, Chief Billy Friend of the Wyandotte Nation addressed a crowd in Dublin, Ohio. It was a celebration of the city’s new Ferris-Wright Park, which features examples of the ancient geometric earthworks and mounds, or artificial hills, that dot the state.

A newly appointed member of the board of trustees of the state’s history agency, Ohio History Connection, Chief Friend greeted the throng and introduced himself in the Wyandot language. He then shifted to English, explaining that tribal elders chose his name.

“It means ​‘he who talks a long time,’” he quipped. Responding to nervous laughter, he assured listeners that his remarks would be brief.

Ancestors of today’s Native people built the earthen sites between about 100 BC and 400 AD, primarily along tributaries of the Ohio River. Several of the most monumental and magnificent installations — including the Newark Earthworks, which cover four and a half square miles in Newark, Ohio — were selected for potential designation as World Heritage Sites. In 2013, Chief Friend and Chief Glenna Wallace of the Eastern Shawnee Tribe of Oklahoma joined UNESCO officials to tour various earthworks as part of the evaluation process. 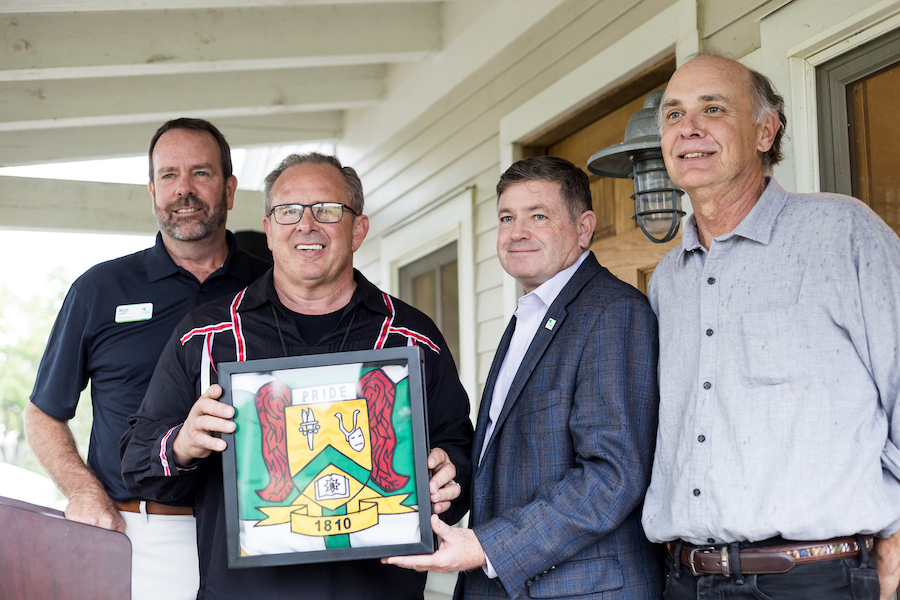 Though little known by the general public, scholars consider the earthworks to be wonders of the ancient world. So writes retired Ohio State University professor Lindsay Jones in his introduction to a book edited with emeritus professor Richard D. Shiels, The Newark Earthworks: Enduring Monuments, Contested Meanings. Despite centuries of plowing and development, several of the approximately 600 complexes and the many freestanding mounds, built about 2,000 years ago, can still be identified. In the coming months, UNESCO is expected to announce whether the Ohio sites will join some 1,000 cultural and natural places worldwide — among them, the Great Wall of China, Stonehenge and the Parthenon — that it has found have ​“outstanding universal value.”

The Newark Earthworks are massive, while Ferris-Wright Park features one of the region’s smaller sites, with earthen structures covering a fraction of a square mile. Visitors to the park’s October festival viewed the earthworks, saw ancient flint arrowheads and other historical items, tried their hand at throwing heritage-styled spears, and watched Dublin officials bestow a city flag on Chief Friend.

Chief Friend called his Ohio trips learning experiences. Now headquartered in Wyandotte, Oklahoma, his tribe was one of Ohio’s original people. In the 19th-century, the tribe was forced out of Ohio on an arduous journey that took them to Kansas then Oklahoma. Other tribes expelled from Ohio included the Shawnee and the Miamis. The Wyandot were the last to leave the state, according to Chief Friend.

In an interview, Chief Friend said that over the last 15 years, Ohio has warmly welcomed back its indigenous people and ensured that Native sacred sites and other places are respected and cared for. In addition to appointing Chief Friend to its board, the Ohio History Connection has created an American Indian Relations division, with a director and educational and research resources. At Ohio State University, American Indians run its Newark Earthworks Center, a research and study institute; the director is John Low, of the Pokagon Band of Potawatomi Indians, and the associate director is Marti Chaatsmith, who is Comanche and Choctaw. The University of Cincinnati offers an engaging website for earthworks visitors, ancien​to​hio​trail​.org.

“[Ohio] is where my ancestors stood, partook of ceremonies, and fought,” Friend told me. He stressed the importance of reaffirming history. ​“Our tribal mission is to preserve the future of our past.”

With that in mind, he takes Wyandot high-school and college students on bus tours of their heritage Midwest homelands. In September 2019, he and fellow tribal members attended a ceremony in Sandusky, Ohio. At the event, the Methodist Church returned land the tribe gave it as it left the state in 1843. The Wyandot did this so the church could protect burials on the now-repatriated tract. Looking back, Friend told the Washington Post, it was the ​“best thing” the tribe did in those difficult times. 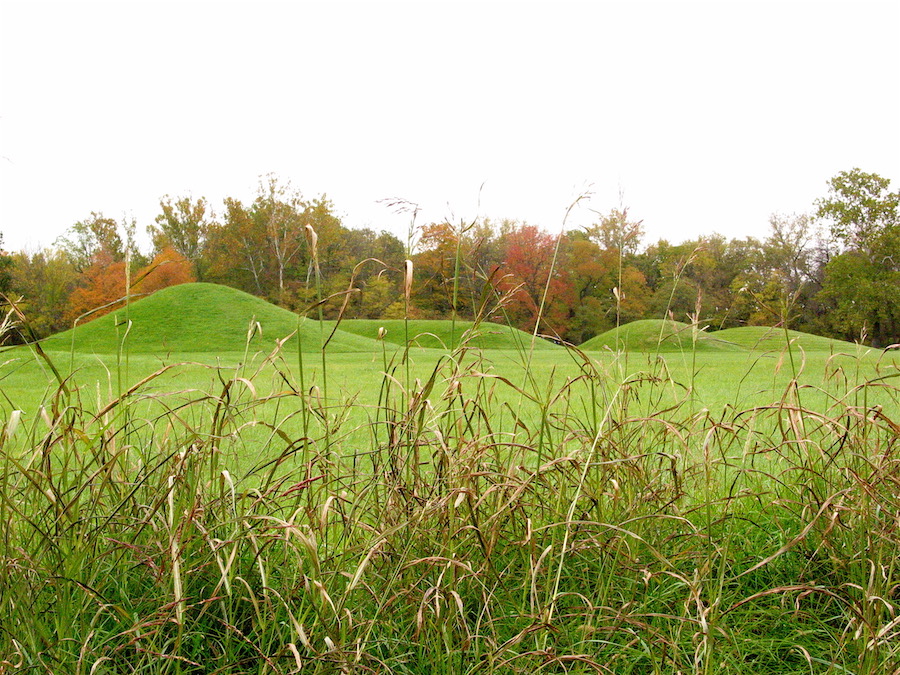 The earthworks’ builders were skilled architects, geometers, and astronomers. They created masterpieces of subtlety, with earthen-walled squares, circles, octagons and other forms rising gently from their surroundings. Even with walls that may be 14 feet high, the places are difficult to comprehend fully from the ground. Precisely aligned walls and perfectly positioned openings mark important points in the solar and lunar cycles. These include solstices, equinoxes, and the northern lunar standstill. The last is the northernmost point of the moon’s oscillating rising points, occurring every 18.6 years.

Though the ancients lived in small, decentralized hamlets, they managed to build many large, complicated, and remarkably consistent places throughout Ohio. They accomplished this without the rulers or centrally directed construction methods that, for example, the Egyptians used to build the pyramids.

They were also expert craftspeople with an extravagant material culture. Among the many items they fabricated were stone statuary and pipes, copper trumpets, pottery, and ghostly open hands made from sheets of translucent mica. They created jewelry with freshwater pearls and adorned burials with thousands of them, according to Chaatsmith.

We do not know what the ancients called themselves. Archaeologists dubbed them ​“Hopewell,” after the owner of the farm on which a site was identified. Academic researchers continue to try to determine the earthworks’ exact function, or functions. Were they pilgrimage sites, astronomical observatories, ceremonial grounds, trading posts, cemeteries, or some combination of those … or something else?

Chief Friend pointed out that the Wyandot language, like that of other indigenous people, is built on verbs, not nouns. The earthworks, built by the distant ancestors of numerous modern-day tribes, may not have been designed for a static purpose that could be named by a noun, or adjective-noun pair, he said. The places may have been intended to present the activities of life more broadly, he said.

He gave a contemporary example of what he felt was likely the ancient earthworks builders’ sense of fluidity. When speaking Wyandot today, Chief Friend explained, ​“Even an animal or a type of kinship isn’t a rigid thing designated by a noun. Like these earthworks sites, they have life.”

Time may have also figured in the original meaning of the earthworks, Friend suggested. Installations that mark the moon’s generation-long cycle, such as the one in Newark, may have hosted large gatherings to celebrate that time span. More diminutive sites, like the one in Dublin, may have presented smaller-scale, more frequent occasions, he said.

Some practices of the earthworks builders appear to have survived in varied ways. Shawnee Tribe Second Chief Ben Barnes and archaeologist Brad Lepper have explored a connection between ancient Hopewell and contemporary Shawnee drum making. The Newark Earthworks Center has teamed with the Native American Center of Central Ohio, in Columbus, to put on a multi-tribal powwow and has sponsored a Newark Earthworks Day — a gathering that may resemble the site’s original festivities, with a processional, drumming and dancing, speeches, exhibits, and a feast.

Nowadays, the earthworks may tend to seem large, empty, and somber, but according to Chaatsmith they were once places ​“of joy and light.” 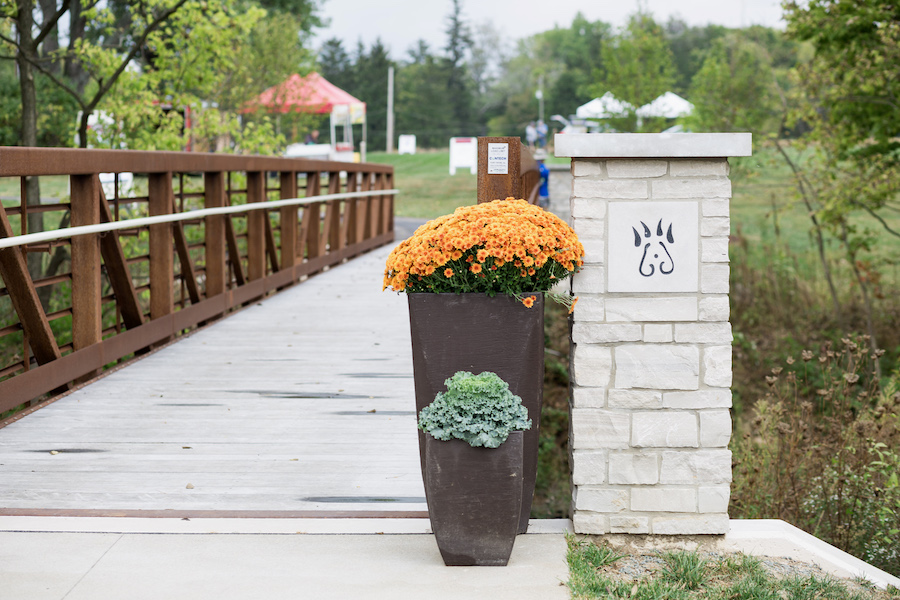 As visitors walked across the bridge into Ferris-Wright Park, they passed the Hopewell iconography that Chaatsmith suggested, and the Dublin parks department chose, to adorn the posts on either side of the span.

​“I feel that I am home,” said Chief Friend.

See the options
Stephanie Woodard is an award-winning journalist who has written investigative articles for In These Times. Her new book is American Apartheid: The Native American Struggle for Self-Determination and Inclusion.
Have thoughts or reactions to this or any other piece that you'd like to share? Send us a note with the Letter to the Editor form.
More articles by Stephanie Woodard
FeatureInvestigationGoodman Institute
Mining Companies Strike Gold by Destroying Public Lands
Indigenous tribes sound the alarm about a mining boom
DispatchRural AmericaThe Wisconsin Idea
Native Voters Could Swing the 2020 Election—If They’re Able to Vote
Menominee tribal citizens are working to make Native votes count in Wisconsin
Rural America
Bringing Back the Buffalo Was Always Important to the Rosebud Sioux. The Pandemic Made It Urgent
Similar articles
ViewpointRural America
GDP: A Countdown to Doom
The numbers we use to measure the economy’s recovery from Covid also measure the rate at which we barrel into ecological catastrophe.
Joseph Bullington
Rural America
Racing to Save Languages and Cultures, Native American Tribes Rapidly Roll Out Vaccines
Covid-19 has killed Native people at a faster rate than any other group in the U.S., but vaccine rollout in Indian Country has so far been a success story.
Alex Brown
Rural America
Animals and Plants Are Relocating Because of Climate Change. Should They Be Considered Invasive?
Jenny Morber
Join our newsletter
Fearless journalism, emailed straight to you.
Subscribe and Save 66%