USDA Secrecy and Corporate Agribusiness: Why Should Organics be Different?

The Cornucopia Institute is a non-profit organization based in Cornucopia, Wisconsin. Through research and investigations into agricultural and food issues they advocate ​“economic justice for the family-scale farming community” and provide ​“needed information to family farmers, consumers and other stakeholders in the good food movement.” The institute supports ecologically-produced, local and organic food.

When Congress passed the Organic Foods Production Act of 1990, it created a unique public-private partnership of governance. It vested statutory power in the National Organic Standards Board (NOSB). The organic community originally lobbied Congress to create the NOSB to insulate organic regulatory oversight from the improper influence of corporate agribusiness/​biotechnology lobbyists.

As Cornucopia members and engaged organic stakeholders know, the spirit and letter of the law have been grossly disrespected by current and previous administrations at the USDA.

They say that, ​“Sunshine is the best disinfectant.” In addition to the USDA monkey-wrenching the rulemaking process by delaying the implementation of standards, until 2002, it has subsequently assisted Big Food by doing a yeoman’s job of maintaining a high degree of secrecy, in spite of their crowing about ​“transparency.”

In response to a pattern of withholding documents requested through the Freedom of Information Act (FOIA), The Cornucopia Institute has filed a series of lawsuits that would help us gauge the performance of the National Organic Program (NOP).

It’s not that we don’t receive any documents from the USDA through FOIA. Rather, it’s that they are violating the law in terms of timeliness and withholding documents that, we believe, they are not entitled to suppress (e.g. criterion allow withholding for personal material regarding employees, confidential business practices, or matters concerning internal deliberations).

In response to one FOIA request (we will be appealing improper withholding of documents), we sought details to investigate how some of the rules governing the NOSB meetings were changed without consulting the board or informing the public.

The most secret administration in history?

Upon taking office, President Obama proclaimed, ​“A new era of openness.” However, the AP found that, under Obama, 17 major agencies were 50 percent more likely to deny FOIA requests than under Bush.

If corporations are caught ​“willfully” violating the law, they should be vigorously prosecuted, fined, and/​or banned from organic commerce.

What else is secret at the NOP? Since it is not a scientific body, but rather a diverse set of organic stakeholders, Congress gave the NOSB the ability to hire independent scientists to advise them. This law has been historically violated. The USDA, rather than the NOSB members, has selected the scientists.

When Cornucopia wrote the Organic Watergate Report, we found that the USDA was contracting with agribusiness executives and consultants. Whoa Nelly! Is it any surprise that the scientists were looking the other way when dangerous ingredients like carrageenan, a very cost-effective processing material for agribusiness, were reviewed for inclusion in organic foods?

How did the NOP solve this flagrant conflict of interest? They decided to make the identities of all the scientists preparing Technical Reviews for the NOSB secret! Not only does the public not know who they are, the NOSB members themselves don’t know.

Corporate interests, including some NOSB members, have accused the Cornucopia Institute of bullying and intimidation. How are we doing that? We have the audacity to publicly tell the truth.

In the email, Zareb Herman, Regulatory Affairs Director at Hain, said, “… Cornucopia took a photo of her [their corporate representative testifying at a NOSB meeting] and put it up on their website. They attacked our company on their website and on Facebook and twitter.”

Attacked? First, we accurately reported that Hain Celestial had sided with the USDA’s stripping the NOSB of part of its ability to remove synthetic materials from the National List of approved substances at Sunset. Next, we challenged their representative’s mischaracterization of Hain Celestial as a modest organic business (Hain Celestial is currently worth $3.57 billion).

Major corporations and the USDA, in gutting the strict provisions of organic governance and opening the floodgates in the organic industry to production by giant factory farms and imports from countries like China, don’t like being called out publicly on the duplicity that is undermining the organic label.

Advocating secrecy instead of oversight

Richardson wrote to McEvoy, inquiring: ​“I would like to consider using simple hand voting in October. Why do we do roll call? Are we required to have a record by individual name? Any legal reason not to do hand vote and just totals? Cornucopia won’t be able to rate our voting record!”

To separate the hyperbole from actual voting records, Cornucopia has published a scorecard, rating each NOSB member’s voting record (and their corporate affiliations). Employees of companies like Whole Foods, Driscoll’s, and WhiteWave (Horizon® and Earthbound®) have abysmal scores when compared to policy recommendations of The Cornucopia Institute (and the majority of other nonprofits).

Richardson didn’t criticize the accuracy of our scorecard. She only tried to shield the corporate NOSB members, and others with low voting records, from public scrutiny.

Congress designed the NOSB to actually appoint and oversee the staff director at the NOP, not conspire to impede the ability of civil society groups to watchdog the job the USDA is doing protecting the public and the integrity of the organic label.

As Harry Truman once said, ​“If you can’t stand the heat, get out of the kitchen.” Maybe I will say, in 2016, if the disinfecting rays of sunshine are too scorching for comfort, you are involved in the wrong industry. Because, as organic farmers, ethical business people, and consumers, we consider this to be a values-based industry, of which transparency is one of the foundational precepts. 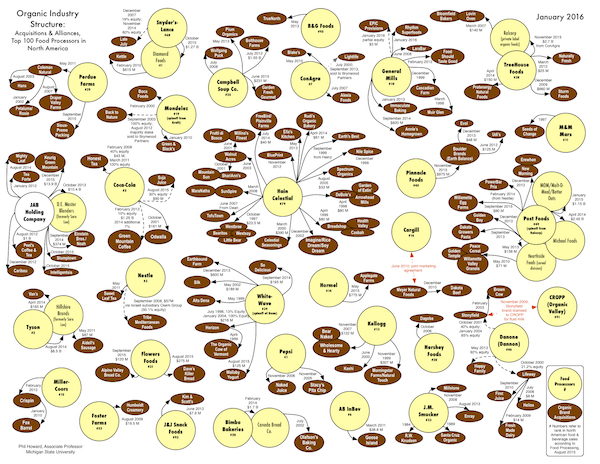 “Who owns organic?” A chart depicting the current acquisitions and alliances of the top 100 food producers in North America. For better resolution, click here. (Image: cor​nu​copia​.org)

(A version of this article originally appeared on Cor​nu​copia​.org)

Get your copy
Mark Kastel is co-founder of The Cornucopia Institute and director of its Organic Integrity Project. He worked for agribusiness giants International Harvester and J.I. Case before making the paradigm shift to sustainable farming. He lives on a 160-acre organic farm in the rugged hills of southwestern Wisconsin, near the tiny burg of Rockton.
Have thoughts or reactions to this or any other piece that you'd like to share? Send us a note with the Letter to the Editor form.
Similar articles
Rural America
“Strange Paradox:” Rural Towns Surrounded By Farmland Are Losing Food Access
In many rural areas, dollar stores are replacing grocery stores. An Illinois town responded by opening a community-owned market.
Amanda Pérez Pintado
Rural America
In the Southeast, Climate Change Finds a Landscape Already Ravaged by Inequality
Meet the groups demanding climate justice that fits the region's unique needs.
Paul Gordon
LaborRural America
Meatpacking Workers Say Attendance Policies Force Them to Work With Covid-19 Symptoms
As the pandemic rages, punitive attendance policies at corporate meat plants coerce sick workers into showing up, according to activists, experts and the workers themselves.
Heather Schlitz
Join our newsletter
Fearless journalism, emailed straight to you.
Subscribe and Save 59%