Last week, Chile’s student and labor movements united for one of the country’s largest mobilizations ince the dictatorship of Augusto Pinochet ended in 1990. On April 11, more than 200,000 students, teachers and workers from across the country joined together to demonstrate for free, quality education. In Santiago, 150,000 marched, amounting to the largest mobilization since the student movement began two years ago. All photos are from AFI-Santiago, shooting in the nation’s capital. (Captions and translation by Jackson Foote). 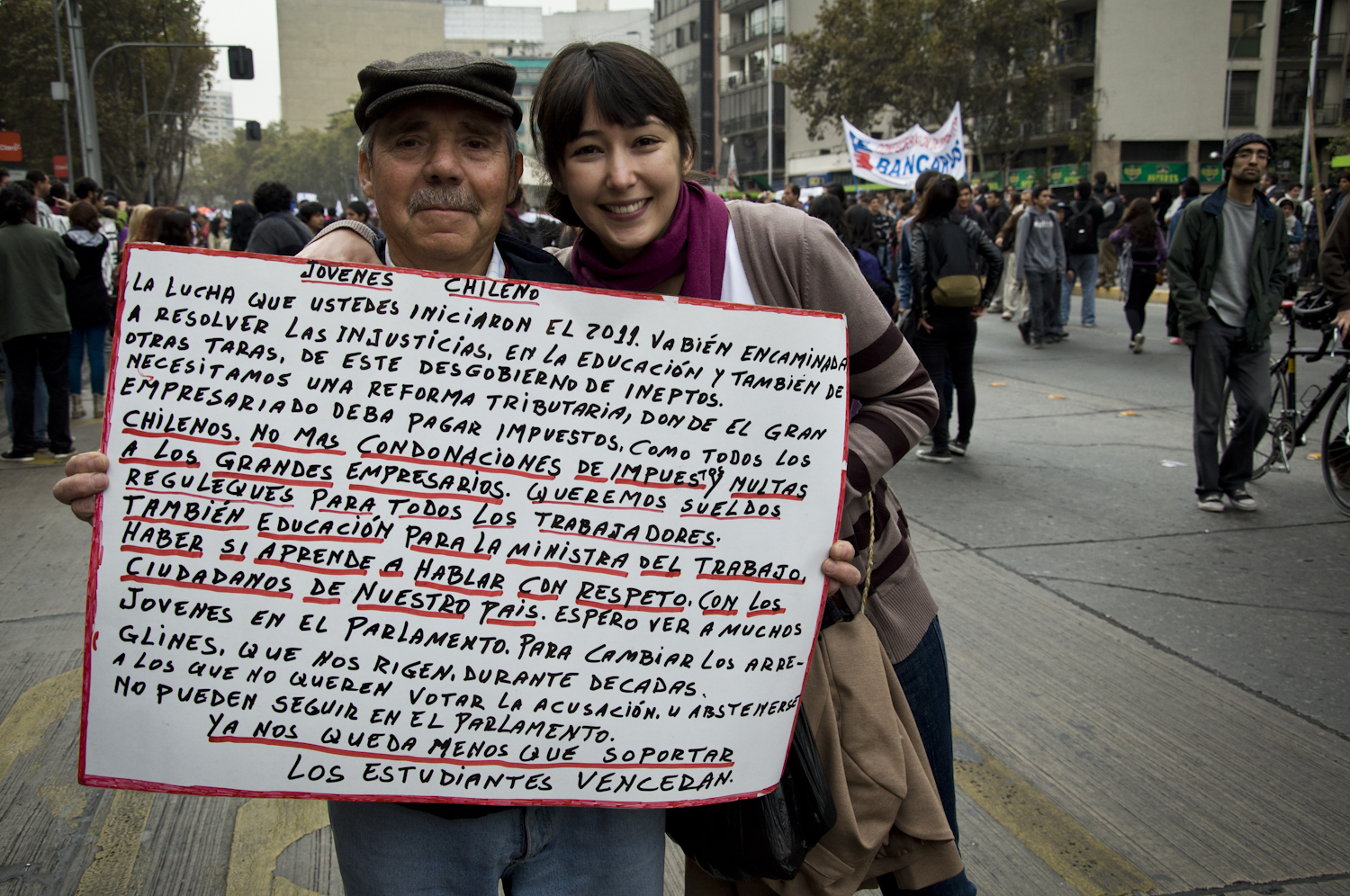 Father and daughter supporting education and labor rights with a sign critiquing the political class: ​“The struggle that you began in 2011. It’s on track to resolves injustices in education and other tasks left by this inept non-government. We need tax reform, where the big business should pay taxes, like all Chileans, where there are no more tax loopholes, and where we fine rich executives. We want fair salaries for all workers. We also want education for the minister of labor in the hope that he learns to speak with respect with the citizens fo our country. I hope to see many young people in congress to change the crappy laws that have governed us for decades. To those who don’t want to vote for impeachment (of the education minister) or abstain, you can’t continue in the congress. We have less and less time left to hold on. The students shall overcome.” (Photo by Daniela León Lira) 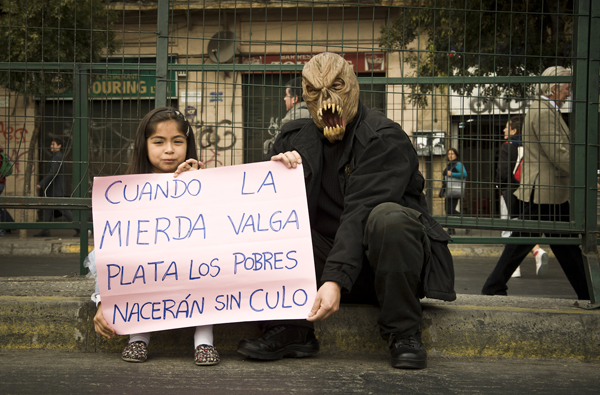 Father and daughter rest after the end of a long march. Their sign reads: ​“When shit is as valuable as gold, the poor will be born without assholes.” (Photo by Daniela León Lira) 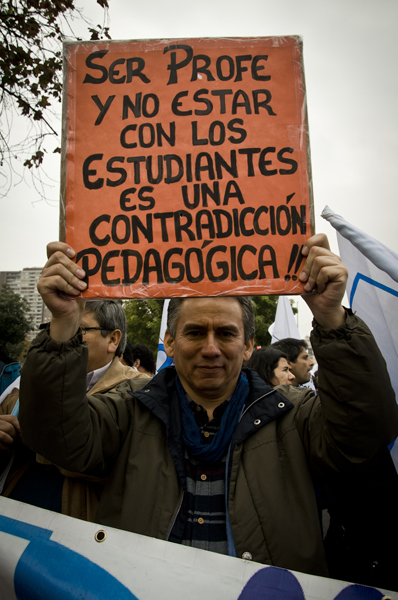 A member of a major teacher’s association in Chile holds a sign that says, ​“to be a teacher and not be with the students is a pedagogical contradiction.” (Photo by Daniela León Lira) 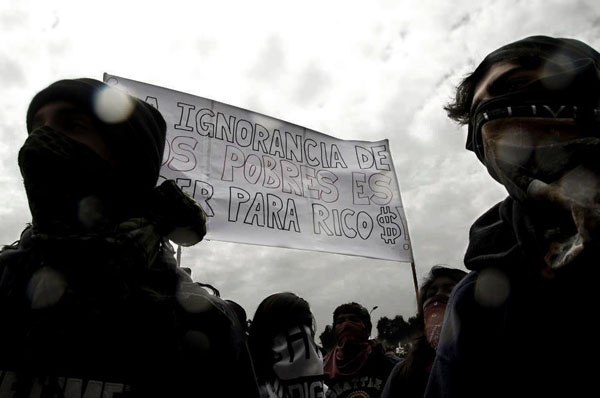 Students don bandana’s to protect themselves from tear gas and photographs. They are known as encapuchados, the hooded. ​“Ignorance of the poor is power for the rich.” (Photo by Daniela León Lira) 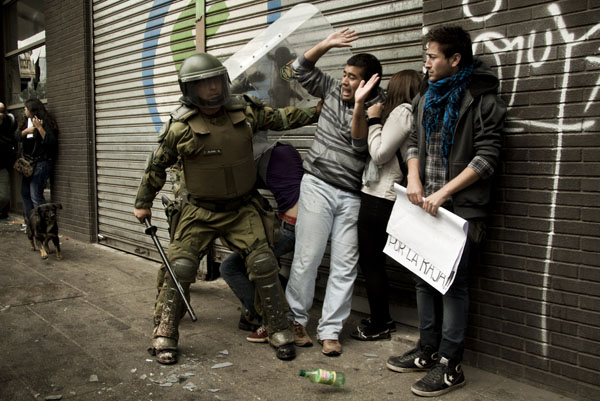 A police officer threatens protesters who tried to stop their comrades from being detained, despite the presence of many photographers. (Photo by Daniela León Lira) 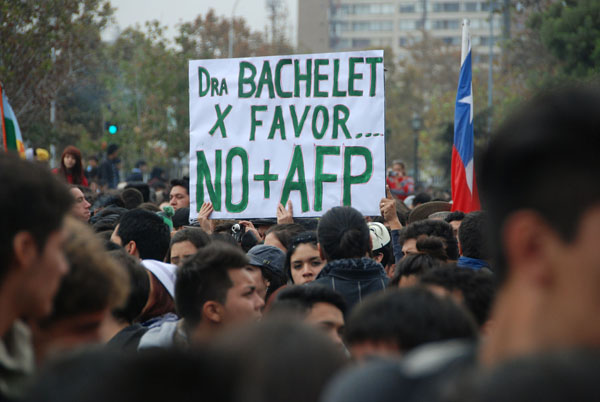 A sign is raised above the crowd, asking the former president and second-time presidential candidate to end the private pension fund introduced by the neoliberal economists shaping policy under August Pinochet’s dictatorship. ​“Doctor Bachelet, please no more AFP.” (Photo by Vicente León) 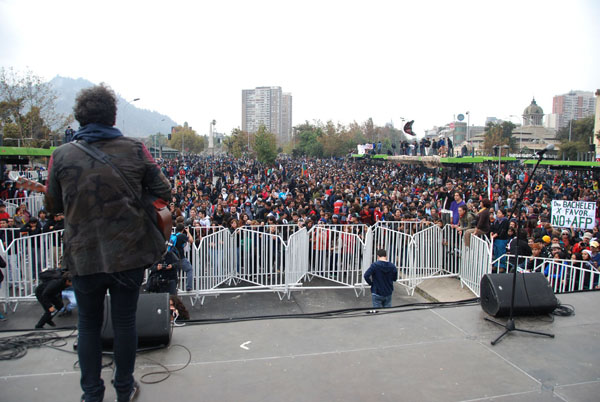 Hundreds listen to protest songs after the march through Santiago’s downtown. Water cannons and tear gas cause turmoil just yards away. (Photo by Andrés Bravo) 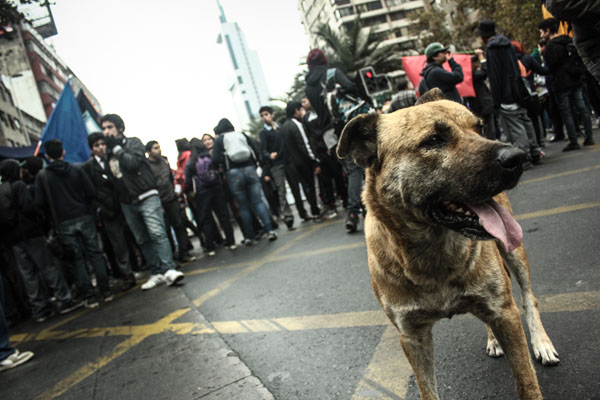 Street dogs are informal mascots of the student movement because they often rush to the front of marches and are the first to clash with police. (Photo by Vicente León) 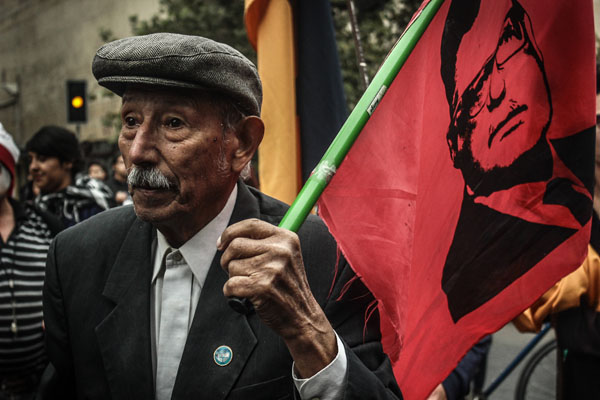 Tío Lucho, or uncle struggle, is a symbolic figure in the student movement who makes an appearance at most marches. Here he carries a flag with the image of Salvador Allende, the democratically elected socialist president deposed by the 1973 coup. (Photo by Vicente León) 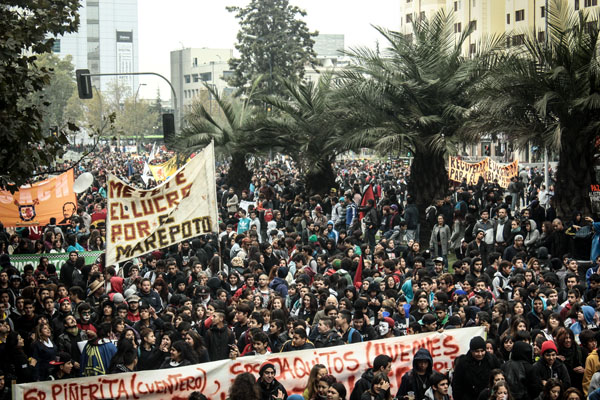 Tens of thousands march from Plaza Italia at the heart of modern Santiago to Cal y Canto, a mile-and-a-half away. (Photo by Vicente León) 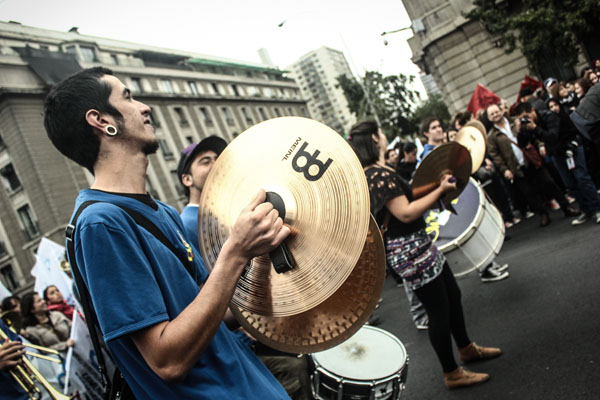 Drumlines, music and other forms of street performance are fixtures at marches in South America. (Photo by Vicente León ) 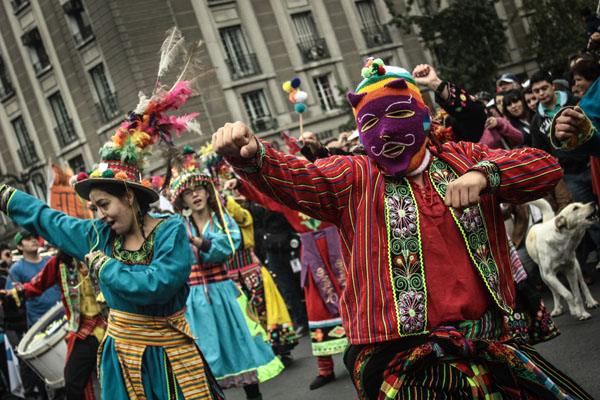 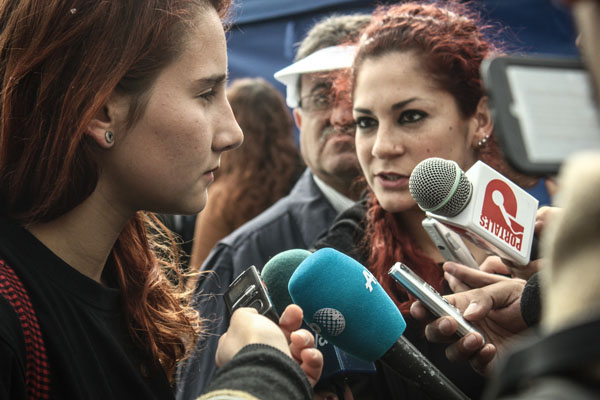 Eloísa González, an 18-year-old national spokesperson for the student movement, has become a media star over the past year. In October, she came out as a lesbian, striking a symbolic chord for the burgeoning queer movement in Chile. (Photo by Vicente León) 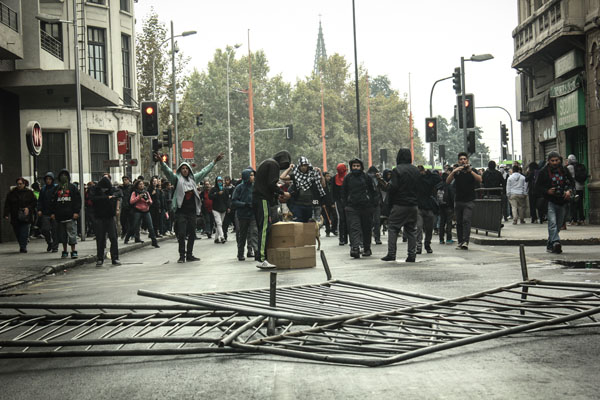 A confrontation ensues over the police barricades intended to restrict the marches to particular streets. (Photo by Vicente León) 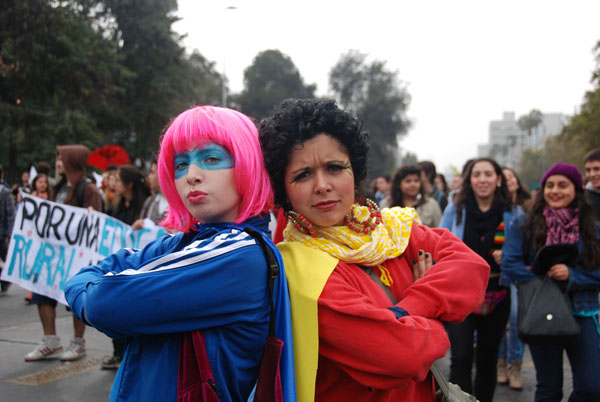 Have thoughts or reactions to this or any other piece that you'd like to share? Send us a note with the Letter to the Editor form.
Similar articles
Uprising
Manning Found Guilty on Nearly All Counts
Lewis Kendall
Uprising
NYPD Rings In New Year With Arrests, Press Harassment
Allison Kilkenny
Uprising
Oakland Protesters Shut Down Port, Clash With Police
Allison Kilkenny
Join our newsletter
Fearless journalism, emailed straight to you.
Subscribe and Save 59%