The Department of Agriculture’s Economic Research Service (ERS) researchers and others who analyze conditions in ​“rural” America most often use data on nonmetro areas, defined as counties outside the commuting zones of cities of 50,000 or more. Population growth rates in rural counties have been significantly lower than in urban (metro) counties since the mid-1990s, and the gap widened considerably in recent years. Between 2006 and 2016, annual rates of population change in rural areas fell from 0.7 percent to below zero, while urban rates fell only slightly from 1 to 0.8 percent. 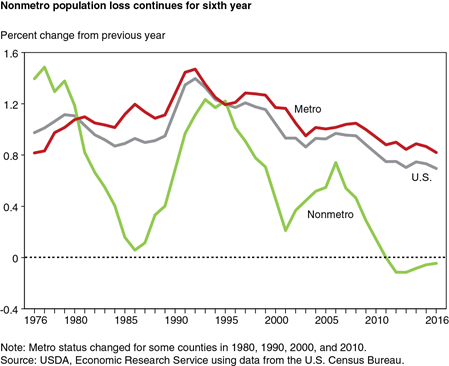 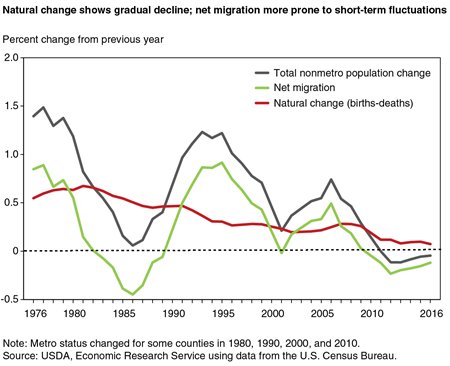 Areas that recently began experiencing natural decrease are found in New England, northern Michigan, and high-poverty areas in the southern Coastal Plains. Such counties also are found in and around the margins of Appalachia, expanding a large region of natural decrease extending from Maine through northern Alabama. 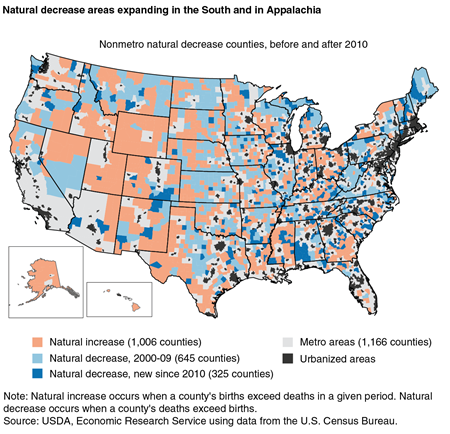 Opportunities for population growth and economic expansion vary widely from one rural county to the next. A comparison of maps for two time periods (2002−08 and 2010 – 16) shows that new regional patterns of growth and decline have emerged in recent years.

Rapid population gains in rural counties near large and medium-sized metro areas reflected long-term suburbanization trends that transformed hundreds of rural areas and small towns. Rapid growth was also concentrated in recreation areas with attractive scenery and retirement destinations, such as throughout the Rocky Mountains and Pacific Coast regions, in the Ozarks and southern Appalachia, and in Florida. 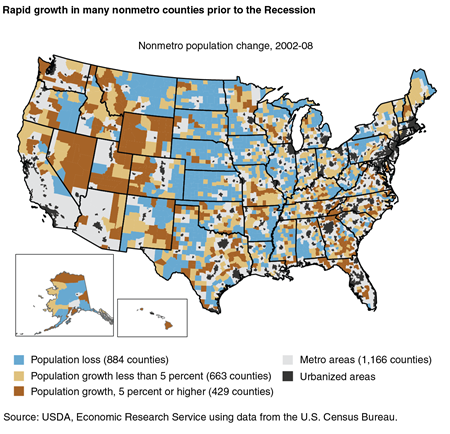 The second map shows declining population trends and geographic shifts since 2010. In 2010 – 16, rural population decline occurred in 18 out of 23 eastern States that had been growing during 2002-08. Population growth also slowed considerably in the Mountain West for the first time in decades, affecting numerous counties in Utah, Idaho, Nevada, and elsewhere. Overall, only 138 rural counties grew by 5 percent or more since 2010, compared with 429 counties prior to the Great Recession.

Spurred by an energy boom, large sections of the Great Plains turned around decades of population decline. This is most visible in sparsely settled regions such as the Williston Basin in western North Dakota and eastern Montana. However, the most recent year of data (2015−16) shows a significant reversal in population growth in these energy-sector regions, in line with recent cutbacks in oil production. 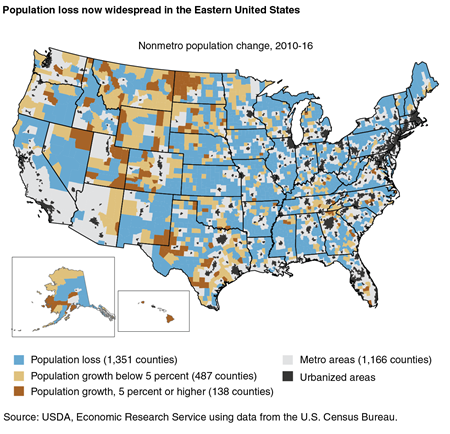 This first-ever period of overall rural population loss may be short-lived depending on the course of the economic recovery. The cyclical downturn in net migration that began in 2007 bottomed out in 2012, and improving population trends since 2012 coincide with a marked improvement in rural employment growth. Even if temporary, this small but historic shift to overall population loss highlights a growing demographic challenge facing many regions across rural and small-town America: population growth from natural increase is no longer large enough to counter cyclical net migration losses.

John Cromartie is a geographer with the USDA’s Resource and Rural Economics Division. He conducts research on rural population change, rural housing, and rural-urban classifications and recently completed a collaborative, field-based study of return migration to rural communities. Cromartie holds a Ph.D. and M.A. in Geography, and a B.A. in History, from the University of North Carolina at Chapel Hill.
Have thoughts or reactions to this or any other piece that you'd like to share? Send us a note with the Letter to the Editor form.
Similar articles
ViewpointRural America
For the Nez Perce, a Proposed Gold Mine Is a Symbol of Broken Promises
The U.S. government stole Nez Perce treaty land to make way for gold miners in the 1860s. A century and a half later, gold mining again threatens the tribe’s homeland.
Marcie Carter
ViewpointRural AmericaThe Wisconsin Idea
How Decades of Corporate-Friendly Farm Policies Wrecked Rural America
A Wisconsin dairy farmer explains what Democrats need to do to rebuild rural communities and regain the ground they’ve lost.
Jim Goodman
Rural America
EPA Gives Agribusiness Giant Syngenta a Pass on Pesticide Monitoring Due to Covid-19 Concerns
Johnathan Hettinger
Join our newsletter
Fearless journalism, emailed straight to you.
Subscribe and Save 66%