The USDA Reports: The Great Recession is Alive and Well in Rural America

Rural America at a Glance is the United States Department of Agriculture’s annual report on the social and economic trends facing rural residents across the country. With few exceptions, its 2015 findings are troubling. Employment has failed to reach pre-recession levels, average incomes have been falling and child poverty is on the rise. Regions dependent on farming, manufacturing and resource extraction are experiencing population declines. Meanwhile, race, ethnicity, family type and lack of education factor heavily in the most struggling areas of rural America. Here is their report.

Employment grew more than 1 percent in rural areas during the year that ended in the second quarter of 2015. This is a marked improvement from previous years of very slow growth or decline. Nonetheless, rural employment in mid-2015 was still 3.2 percent below its pre-recession peak in 2007. In contrast, urban employment rose nearly 2 percent in the past year, continuing a trend of consistent growth since 2011, and is now well above its pre-recession peak.

The number of people living in rural counties stood at just over 46 million in 2014 — nearly 15 percent of U.S. residents. However, the population of rural America has declined by 116,000 over the last 4 years, with losses of about 30,000 people in each of the last 2 years. While these declines are small, 2010-2014 is the first period of overall population decline on record for rural America as a whole, and stands in stark contrast with the urban population, which continues to grow by more than 2 million per year.

Not all rural areas have experienced population loss in recent years. Some rural counties have seen population growth, with nearly 700 growing rural counties together adding over 400,000 residents between 2010 and 2014. These counties are concentrated in scenic areas such as the Rocky Mountains or southern Appalachia, or in energy boom regions such as in the northern Great Plains. The 1,300 rural counties losing population since 2010 are widespread in regions dependent on farming, manufacturing or resource extraction.

Nearly 300 rural counties lost population due to natural change during 2010-14. Such natural decrease results from two separate demographic processes operating over several decades: retiree attraction to rural areas, which leads to a more elderly population with more deaths and fewer births; and outmigration of young adults of childbearing age who would otherwise contribute to more births. Retiree attraction dominates in Florida, Arizona, and other Sunbelt locations, while outmigration of young adults is more typical of farm-dependent counties in the Great Plains and Corn Belt. 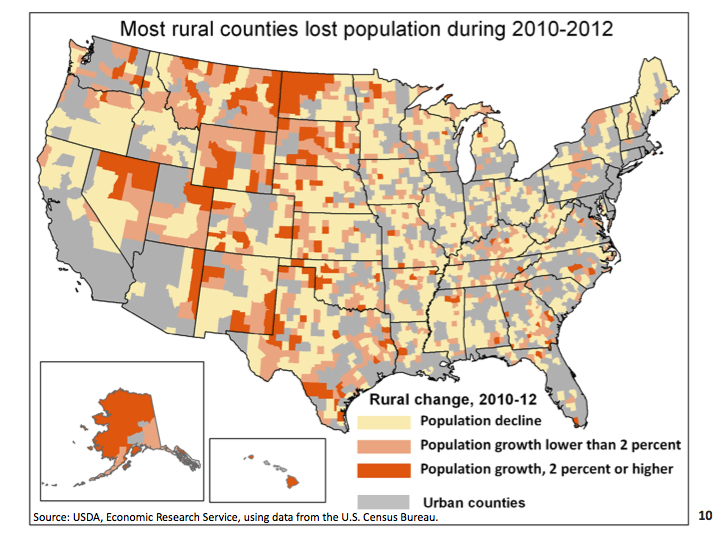 In 2014, the rural poverty rate in 2014 was an estimated 18.1 percent, while the urban rate was 15.1 percent, both slightly below the previous year. Since the early 1980s, poverty rates in rural America have ranged from 13.4 to 18.4 percent, while the urban rate has ranged from 10.8 to 15.5 percent. In rural areas, poverty rates peaked following the recessions of 1980-82 and 2007-09. Recovery from the latter recession has been modest for rural areas overall and stagnant for most rural groups.

Children are more likely to be ​“deeply poor” — living in families with an income below half of the poverty level — than are other age groups. In 2007, 9.6 percent of rural children lived in deep poverty, compared to 6.2 percent for the rural working-age population. By 2014, these rates had risen to 11.3 percent of rural children in deep poverty and 7.8 percent for the rural working-age population.

Yet these changes were not equally distributed across age groups. The poverty rate of Hispanic seniors increased from 2007 to 2014, but that increase was concentrated in the recovery period. Poverty rates for seniors decreased for all other groups, but fell most for American Indians and Alaskan Natives. Overall, the poverty rate for Black children had the largest increase and was the highest at the start of the recession (45.4 percent in 2007) and during the latest year of the recovery (51.1 percent in 2014).

Family type has a significant bearing on poverty. Families headed by two adults are likely to have more sources of income than single-adult families with children and are therefore much less likely to be poor. Likewise, single mothers are more likely to work in low-wage occupations that are among the most vulnerable to instability during periods of economic recession. As such, single female-headed families with children had the highest poverty rate among family types in 2007, and that rate continued to rise during and after the 2007-09 recession. In 2014, nearly 5 out of every 10 rural families headed by a woman with related children and no spouse present were poor. In contrast, less than 1 in 10 rural married-couple families were poor in 2014.

Education and poverty in rural America

The educational attainment of people living in rural areas has improved markedly over time, with increases in high school completion rates and in the proportion of residents who have completed at least some college. The proportion of rural adults with a 4-year college degree or more increased by 4 percentage points between 2000 and 2014, and the proportion without a high school diploma or equivalent, such as a GED (General Education Diploma), declined by 9 percentage points. However, the share of the adult population with a 4-year college degree remains far lower in rural areas than in urban ones, and this gap has grown over time.

Growth in the urban-rural college completion gap has occurred even for young adults, who are more likely to have completed high school than older cohorts. Between 2000 and 2014, the share of young adults age 25-34 with bachelor’s degrees grew in urban areas from 29 to 35 percent. In rural counties, the college-educated proportion of young adults rose from 15 to 19 percent.

Minority populations in rural areas have significantly lower levels of educational attainment. About a quarter of adults age 25 and over in the rural Black and Native American/​Alaskan Native population, and 40 percent of rural Hispanics, have not completed high school or obtained a GED. These shares are considerably higher than for rural Whites. Lower attainment levels for ethnic minorities may both reflect and contribute to high rates of poverty, as poverty in childhood is highly correlated with lower academic success and graduation rates, while educational attainment is strongly associated with earnings in adulthood.

This blog’s mission is to provide the public service of helping make the issues that rural America is grappling with part of national discourse.
Have thoughts or reactions to this or any other piece that you'd like to share? Send us a note with the Letter to the Editor form.
More articles by Rural America In These Times
ViewpointRural America
Dear Congress: Say No to Water Privatization in the Infrastructure Bill
Water costs have soared in recent years as federal funding for water infrastructure has shrunk. Privatization is the last thing we need.
Rural America
An Open Letter to Biden from Indigenous Peoples
Trump wrecked the relationship between the U.S. government and Native nations. Here's how the Biden Administration can repair this damage.
Rural America
In Less Than One Generation, We’ve Lost More Than 10 Million Acres of the Best U.S. Farmland
Similar articles
Rural America
Swamped by Vacation Rentals, Small Towns in the West Are Fighting Back
An explosion in the number of short-term rentals is contributing to an affordable housing crisis in the rural West. Some communities have responded by banning them.
Erika Bolstad
Rural America
As Meatpackers Stoked Fears of a Shortage, U.S. Meat Exports Increased
Citing imminent shortages, the meat industry lobbied to keep packing plants open as Covid-19 tore through workers’ ranks. At the same time, U.S. meat exports increased.
Madison McVan
Rural America
Public Lands Make Up a Third of the U.S. and They're Wildly Popular
Professor John Leshy explains how, in a country that glorifies private property, the public came to own so much of the landscape.
Rhett A. Butler
Join our newsletter
Fearless journalism, emailed straight to you.
Subscribe and Save 59%