Editor’s Note: On Nov. 21, at the annual pardoning of turkeys on the White House lawn, President Trump joked that he’d looked into reversing the fates of the birds his predecessors had spared but had been told he wasn’t allowed. Yesterday, he seriously unprotected nearly 2 million acres of public lands inside two national monuments in southern Utah — Grand Staircase Escalante (designated by President Clinton in 1996) and Bears Ears (designated by President Obama last year) — so that the areas could be opened up to oil, gas, mining, logging and other commercial development.

It’s the largest such reversal of national monument status in the nation’s history and Rural America In These Times will report more on this development later. The following report by Daniel Bigelow, an agricultural economist for the U.S. Department of Agriculture’s Economic Research Service (ERS), is part of a larger study that looks at how our use of the land has changed over the years. It compiles 72 years worth of aggregated statistics to examine how everything from commodity prices, weather changes, population growth, technology, conservation policies and government programs have shaped our economics and, as a result, the modern American landscape:

Although land-use decisions are typically made by landowners at the level of individual plots (or parcels), a consistent series of aggregate statistics over time is useful for benchmarking broader shifts and trends. The ERS Major Land Uses (MLU) series is the longest running, most comprehensive accounting of all major uses of public and private land in the United States. The series was started in 1945 and has since been published about every 5 years using the latest data from the USDA National Agricultural Statistics Service’s Census of Agriculture. 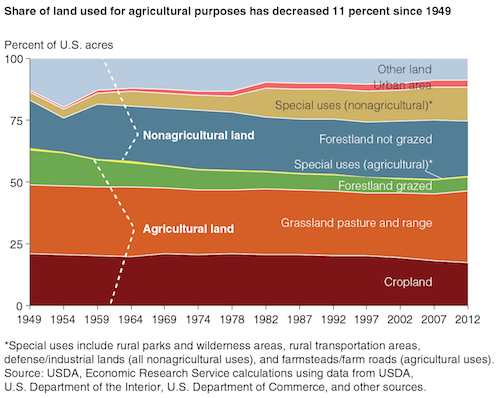 A variety of factors — such as commodity prices, weather, changes in technology, and Government programs — affect how cropland is used. Between 2002 and 2012, a combination of high commodity prices and drought conditions influenced trends in cropland use. Cropland harvested, which accounts for the majority of cropland use, increased by 8 million acres. Rising commodity prices for corn and soybeans, in particular, contributed to the increase by incentivizing farmers to plant additional acres of these commodities.

In addition, droughts in several major crop-producing regions resulted in above-average failed cropland acreage, reaching 17 million acres in 2002 and 13 million acres in 2011. Idled cropland, a majority of which is enrolled in the Conservation Reserve Program (CRP), also increased during the most recent droughts despite a reduction in land enrolled in the CRP. This suggests that some farmers voluntarily removed land from crop production because of poor growing conditions or constrained irrigation water supplies. Land used for summer fallow declined by 3 million acres in recent years, partially due to increased adoption of moisture-conserving production practices such as no-till and mulch-till. 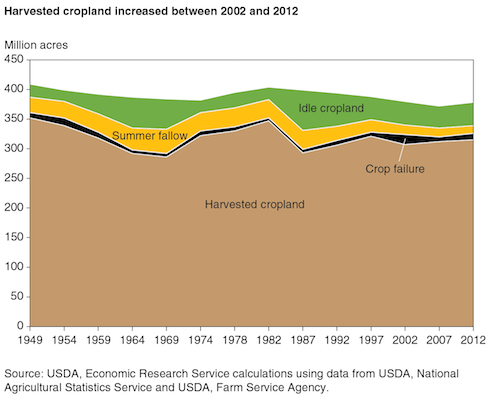 Land used for grazing purposes — comprised of permanent grassland pasture and range, grazed forest-use land, and cropland pasture — has exhibited a long-term decline since 1949. However, between 2002 and 2012, total grazing land increased by 15 million acres. While cropland pasture declined substantially in the most recent 10-year period, this decline was more than offset by a corresponding uptick in permanent pasture. These changes were largely a result of a reclassification of most land formerly labeled as cropland pasture resulting from changes in the 2007 and 2012 Census of Agriculture questionnaire.

The vast majority of grazing land is in permanent grassland pasture and range use and, aside from the recent uptick, the acreage of land in this category remained relatively stable at 587 – 604 million acres between 1969 and 2002. As forests have been cleared from farmland, a long-term decline in grazed forestland of 186 million acres has taken place since the start of the MLU series. Between 2002 and 2012, grazed forest-use land exhibited a small decline of 4 million acres. 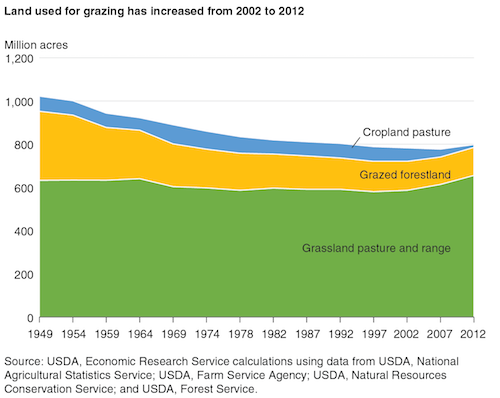 The distribution of both agricultural and non-agricultural land uses varies substantially across the country based on factors such as soil, climate, and federal and local policies and programs. Cropland is concentrated in the Corn Belt and Northern Plains regions, where several States (including Iowa, Kansas, and Illinois) have more than half of their land base devoted to cropland. Grassland pasture and range accounted for a large share of land in the Mountain (60 percent) and Southern Plains (59 percent) regions. Forest-use land is mainly found along the eastern seaboard in the Southeast (62 percent), Northeast (59 percent), Delta States (58 percent), and Appalachia (57 percent) regions. 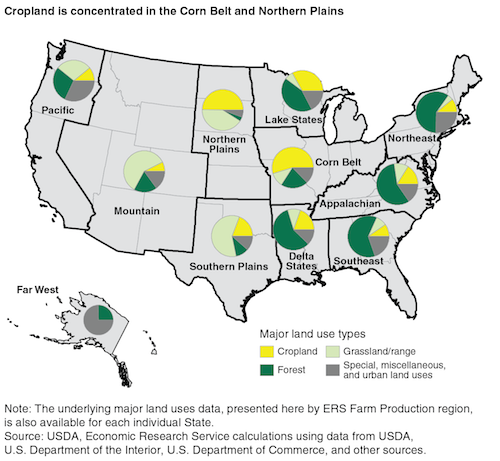 Urban land is most prevalent in the Northeast, where several states have urban shares of roughly 40 percent (New Jersey, Rhode Island, Massachusetts and Connecticut). Although urban land use makes up a small fraction of the land base (3 percent), it has continually increased over time in response to population and economic growth.

Increases in urban land are often offset by declines in undeveloped rural land (e.g., cropland, pasture/​range and forestland). Land-use changes between undeveloped categories are generally reversible — but, once developed, urban land rarely reverts back to an undeveloped use. The National Resources Inventory reveals most new land development between 2007 and 2012 took place on land that was formerly in forestland and cropland uses.

(“A Primer on Land Use in the United States” was originally published by Amber Waves, a monthly online magazine featured on the USDA ERS website. The editorial content of Amber Waves is in the public domain and may be reproduced without permission. The larger ERS report from which this overview was adapted can be accessed here.)

See the options
Daniel Bigelow is a Research Agricultural Economist in the Farm Economy Branch of the Rural and Resource Economics Division. He studies land use and land valuation, with particular emphasis on the microeconomic foundations through which aggregate land-use patterns and trends emerge. Additional areas of research in which Dan holds an active interest are the economics of climate change and water resources.
Have thoughts or reactions to this or any other piece that you'd like to share? Send us a note with the Letter to the Editor form.
Similar articles
Rural America
Does Lake Erie Deserve Legal Rights? A Federal Court Hears Arguments
Stacey Schmader
Rural America
Can the Corporate Takeover of Dairy Farms be Stopped?
John Ikerd
Rural America
In Less Than One Generation, We’ve Lost More Than 10 Million Acres of the Best U.S. Farmland
Rural America In These Times
Join our newsletter
Fearless journalism, emailed straight to you.
Subscribe and Save 66%