The Rural-Urban Divide in Six Charts

The Conversation, an online resource that describes itself as ​“an independent source of news and views from the academic and research community,” asked sociologists, economists, geographers and historians to describe the factors that contribute to the differences between life in rural and urban America. Contributor attributions are noted in italics at the end of their respective sections.

Poverty is higher in rural areas

Discussions of poverty in the United States often mistakenly focus on urban areas. While urban poverty is a unique challenge, rates of poverty have historically been higher in rural than urban areas. In fact, levels of rural poverty were often double those in urban areas throughout the 1950s and 1960s.

While these rural-urban gaps have diminished markedly, substantial differences persist. In 2015, 16.7 percent of the rural population was poor, compared with 13.0 percent of the urban population overall — and 10.8 percent among those living in suburban areas outside of principal cities. 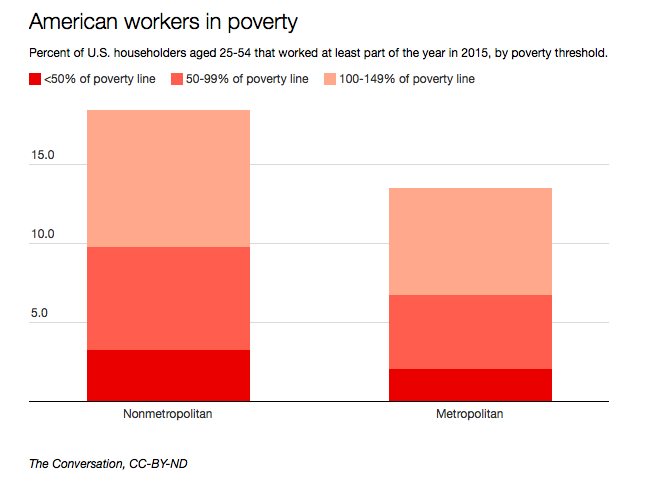 Contrary to common assumptions, substantial shares of the poor are employed. Approximately 45 percent of poor, prime-age (25−54) householders worked at least part of 2015 in rural and urban areas alike.

The link between work and poverty was different in the past. In the early 1980s, the share of the rural poor that was employed exceeded that in urban areas by more than 15 percent. Since then, more and more poor people in rural areas are also unemployed — a trend consistent with other patterns documented below.

According to recent research, rural-urban gaps in working poverty cannot be explained by rural workers’ levels of education, industry of employment or other similar factors that might affect earnings. Rural poverty — at least among workers — cannot be fully explained by the characteristics of the rural population. That means reducing rural poverty will require attention to the structure of rural economies and communities.

Most new jobs are not in rural areas

It’s easy to see why many rural Americans believe the recession never ended: For them, it hasn’t. 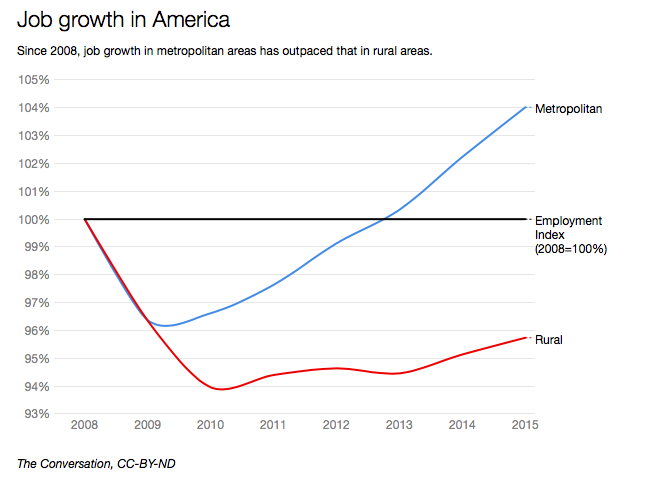 Rural communities still haven’t recovered the jobs they lost in the recession. Census data show that the rural job market is smaller now — 4.26 percent smaller, to be exact — than it was in 2008. In these data are shuttered coal mines on the edges of rural towns and boarded-up gas stations on rural main streets. In these data are the angers, fears and frustrations of much of rural America.

This isn’t a new trend. Mechanization, environmental regulations and increased global competition have been slowly whittling away at resource extraction economies and driving jobs from rural communities for most of the 20th century. But the fact that what they’re experiencing now is simply the cold consequences of history likely brings little comfort to rural people. If anything, it only adds to their fear that what they once had is gone and it’s never coming back.

Nor is it likely that the slight increase in rural jobs since 2013 brings much comfort. As the resource extraction economy continues to shrink, most of the new jobs in rural areas are being created in the service sector. So Appalachian coal miners and Northwest loggers are now stocking shelves at the local Walmart.

The identity of rural communities used to be rooted in work. The signs at the entrances of their towns welcomed visitors to coal country or timber country. Towns named their high school mascots after the work that sustained them, like the Jordan Beetpickers in Utah or the Camas Papermakers in Washington. It used to be that, when someone first arrived at these towns, they knew what people did and that they were proud to do it.

That’s not so clear anymore. How do you communicate your communal identity when the work once at the center of that identity is gone, and calling the local high school football team the ​“Walmart Greeters” simply doesn’t have the same ring to it?

Looking at rural jobs data, is it so hard to understand why many rural people are nostalgic for the past and fearful for the future?

Disability matters in rural America. Data from the American Community Survey, an annual government poll, reveal that disability is more prevalent in rural counties than their urban counterparts.

(Source: RTC: Rural Get the data)

While rural-urban differences in disability have been analyzed previously, researchers have had little opportunity to further explore this disparity, as updated data on rural disability were unavailable until recently. Fortunately, the census released updated new county-level disability estimates in 2014, ending a 14-year knowledge gap. 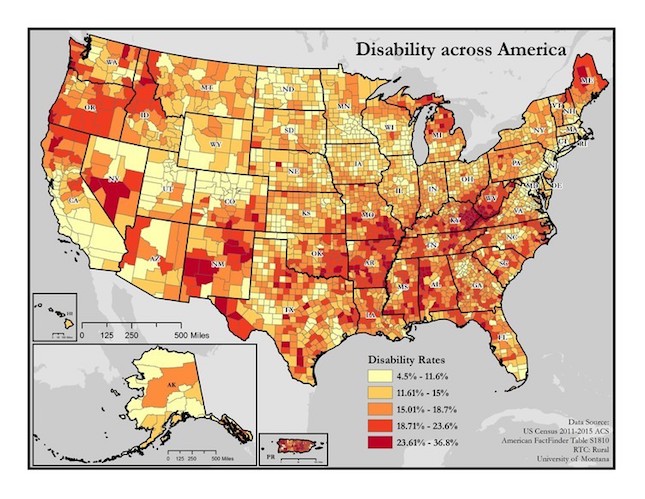 A variety of factors may be behind these regional and rural differences, including differences in demographics, economic patterns, health and service access and state disability policies.

While this survey provides a glimpse into the national prevalence of disability and reveals a persistent rural-urban disparity, it is important to note its limitations. Disability is the result of an interaction between an individual and his or her environment. Therefore, these data do not directly measure disability, as they measure only physical function and do not consider environmental factors such as inaccessible housing.

The United States’ continuing economic dominance is perhaps most attributable to the very smallest elements of its economy: its entrepreneurial start-ups. Nearly 700,000 new job-creating businesses open each year. That’s almost 2,000 every day, each helping to create new market niches in the global economy.

Most people mistakenly believe these pioneering establishments occur in overwhelmingly in metropolitan areas, such as in the now-mythic start-up culture of Silicon Valley. 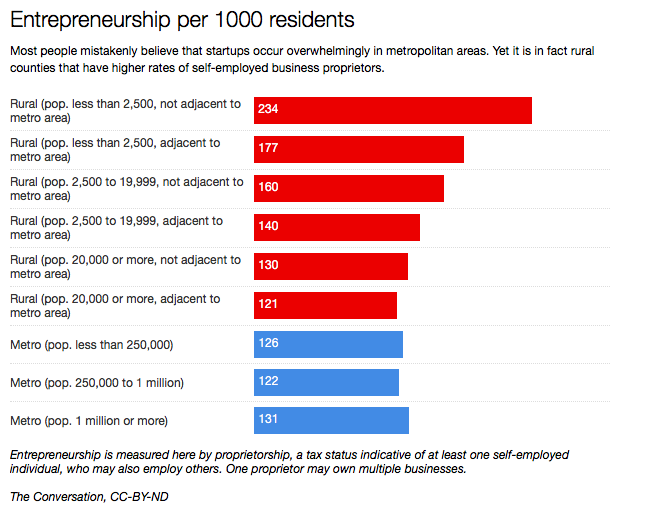 (Source: Authors’ analysis of data from the Bureau of Economic Analysis Get the data)

Furthermore, the more rural the county, the higher its level of entrepreneurship. Some of these counties have a farming legacy — perhaps the most entrepreneurial of occupations — but farmers represent less than one-sixth of business owners in nonmetro areas. Even for nonfarm enterprises, rural entrepreneurship rates are higher.

The reality is that rural areas have to be entrepreneurial, as industries with concentrations of wage and salary jobs are necessarily scarce.

Start-up businesses have notoriously difficult survival prospects. So it is perhaps even more surprising that relatively isolated nonmetropolitan businesses are on average more resilient than their metro cousins, despite the considerable economic advantages of urban areas, which boast a denser networks of workers, suppliers and markets. The resilience of rural start-ups is perhaps due to more cautious business practices in areas with few alternative employment options. 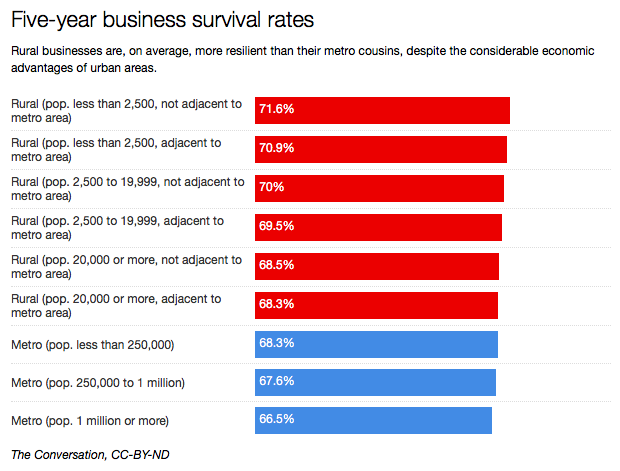 (Source: Authors’ analysis of data from the National Establishment Time Series Get the data)

This resilience is also remarkably persistent over time, consistently being at least on par with metro start-ups, and regularly having survival rates up to 10 percentage points higher than in metro areas over 1990-2007.

(“Six Charts that Illustrate the Divide Between Rural and Urban America” was first published on The Conversation.)

The Conversation is an independent source of news and views from the academic and research community — delivered directly to the public through Creative Commons republication. Aiming to rebuild public trust in journalism, the organization believes ​“Access to independent, high quality, authenticated, explanatory journalism underpins a functioning democracy.”
Have thoughts or reactions to this or any other piece that you'd like to share? Send us a note with the Letter to the Editor form.
More articles by The Conversation
Rural America
Four Academics from Texas Give Us the Lowdown on Energy Markets
Similar articles
Rural America
Reprieve for an Ancient Site: A Mining Company and a Tribe Find a Way to Work Together
Stephanie Woodard
Rural America
Coal Country vs. the Arts Community, Says Who?
Leon Fink
Rural America
Rigged: How Our Legal System Prevents Communities from Governing Themselves
Thomas Linzey
Join our newsletter
Fearless journalism, emailed straight to you.
Subscribe and Save 59%