On the political front, we feature articles looking at how the rural-urban divide is translating into rural support for Donald Trump. Too much water in Louisiana and not enough in California has resulted in multiple natural disasters that continue to affect rural and urban areas in those states.

Massive flooding in parts of Louisiana has set a new precedent, with waters rising far higher than they did during the last big flood of 1983. Unfortunately in Livingston Parish, the hardest hit area, only an estimated 25 percent of homeowners have flood insurance. As we read below, the storms have left many Louisiana farmers with flooded fields.

Out in California, exceptionally dry conditions are fueling a number of large wildfires. Weather researchers, meanwhile, acknowledge the models they’ve been using are outdated because they do not factor in climate change.

And we close with a story about a new documentary on Harry M. Caudill — the Kentucky activist whose book on rural Appalachia helped inspire the War on Poverty.

National Public Radio (NPR) reports rural voters prefer Donald Trump. One might conclude that the distinctive demographic composition of rural areas accounts for this trend. But, one researcher argues, something about rural areas themselves drives voters to Trump:

“”There’s this sense that people in those communities are not getting their fair share compared to people in the cities,” said Katherine Cramer, a political science professor at the University of Wisconsin who studied how Gov. Scott Walker appealed to rural voters.

“They feel like their communities are dying, and they perceive that all that stuff — the young people, the money, the livelihood — is going somewhere, and it’s going to the cities,” she said.

Cramer has labeled these intense, negative feelings against people in the cities ​“rural resentment.” For example, Cramer said that rural people perceive (rightly) that their kids don’t have the same opportunities as kids in some suburban and city schools, like AP classes. 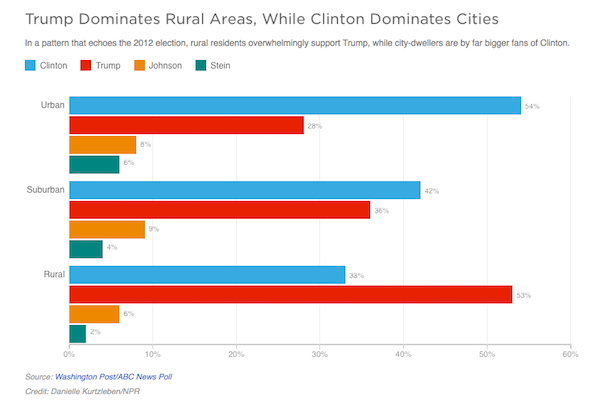 But this is not just about economics. West Virginia’s coal country is part of the broader white, working-class vote that has coalesced around a single candidate, Mr. Trump, like never before. His support here stems from a profound, decades-in-the-making sense of political and cultural alienation that has left people feeling distant from their leaders, and even from fellow Americans.

“I kind of feel that people are looking down on us,” said Neil Hanshew, a miner, voicing a common sentiment. ​“They’re looking at us like we’re a bunch of dumb hillbillies who can’t do anything else.” 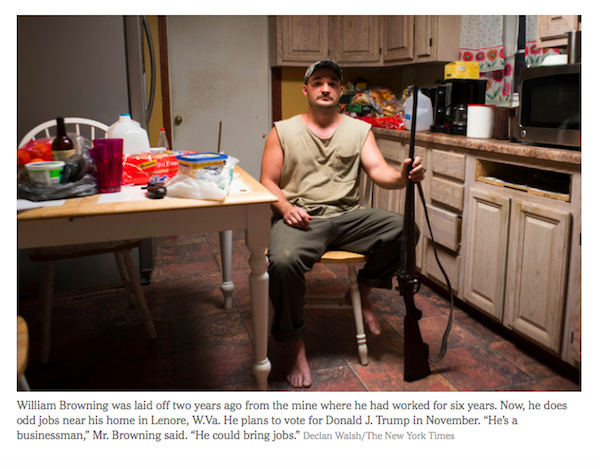 As many as 40,000 homes in the Bayou state were damaged, with many people still living in shelters as of this weekend. As Agri-Pulse reports, the water also damaged farms:

Soybeans are the state’s biggest crop, and many farmers will lose their entire crop for the year, said Ron Levy, the top soybean agronomist for Louisiana State University.

“There is significant damage to soybeans and other crops as well,” Levy said in an interview. ​“A lot of the fields were flooded and there are fields that will be flooded for another week. We still have water rising in some areas from floods in other areas.”

The flooding came at a particularly sensitive time for farmers, many of whom were just starting to see their soybean plants sprout in the pods, said Levy. Those crops, especially in the worst hit areas of the state, will not survive. 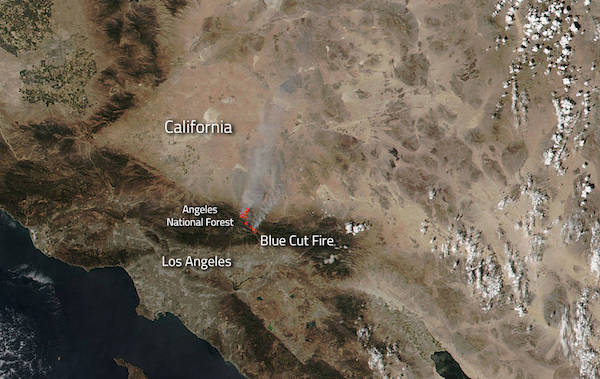 In the West, fires consumed numerous structures and tens of thousands of acres. The Blue Cut fire in California’s San Bernardino Valley caused over 80,000 evacuations. In an interview with The Washington Post, Park Williams, a bio-climatologist at Columbia University’s Lamont-Doherty Earth Observatory, did not shy away from acknowledging the role climate change is playing:

“[Global warming] is absolutely contributing to what we’re seeing in California this year, and more broadly, to the increases in fire activity that we’ve seen over the past several decades throughout the western United States,” Williams said Wednesday. ​“The relationship between fuel dryness and fire activity is exponential. This means that as drying occurs, the effects on fire are increasingly extreme.”

Night Comes to the Cumberlands: A Biography of a Depressed Area, by Harry Caudill, was published in 1963 and brought national attention to Appalachian struggles and the coalfields of Kentucky.

Last week, a new documentary, Harry Caudill: Man of Courage, opened at the Grand Theater in Frankfort, Ky. The film, described here in the Lexington Herald-Leader, chronicles the life of the author who helped inspire Lyndon Baines Johnson’s War on Poverty.

A scene from Harry Caudill: Man of Courage. (Photo: ken​tucky​.com)

In a series on the author by John Cheves and Bill Estep, the Lexington Herald-Leader published the following about Caudill and his work:

Night Comes to the Cumberlands: A Biography of a Depressed Area was published on July 9, 1963. U.S. Interior Secretary Stewart Udall wrote the introduction, calling it ​“a story of land failure and the failure of men.” The book established author Harry Caudill, then 41, as the voice of the beleaguered mountain people.

Caudill did not shrink from the role. Over the ensuing years, he would write scores of magazine and newspaper essays and eight more books, go on television, give countless interviews, lecture to universities and civic groups, and testify to Congress — all while he supported a family with his one-man law practice in Whitesburg.

Commercially, Night was a modest success. It earned positive reviews across the United States and immediately sold several thousand copies. A Hollywood filmmaker paid $500 for the movie option, although nothing came of it.

Culturally, Night was a bombshell, with an impact far beyond mere sales.

No Kentucky book ever brought the state more attention or more firmly established its image in the eyes of outsiders. It was a story of exploitation — of outside corporations buying Appalachian timber and coal for chump change from unwitting natives, extracting everything of value from the Cumberland Plateau and leaving a ravaged landscape and a penniless people.

Here’s an excerpt from Caudill’s book itself:

The tragedy of Central Appalachia is that it is becoming more marginalized in American life just when the country needs more than ever what it has to offer. At a time when the bonds of community and family are visibly failing and people feel more alone than ever, and as they are bombarded from all sides with more demands, and with more ​“data” than they can possibly digest, Appalachia offers a model for a less frenetic and more measured way of life. People of Appalachian descent elsewhere in the nation-and they number many millions-still feel deep ties to some Appalachian hamlet or hollow as to an ancestral homeland, though they may never have even visited it. As they make their way in the big world of getting and spending they know that something valuable has been lost for all they may have gained. That less frenetic way of life is deeply embedded in Appalachian culture, which has proved incredibly tough and enduring. Yet Appalachia has now been so thoroughly bypassed and forgotten that it cannot give, because the rest of America will not take, what could be it’s greatest gift. 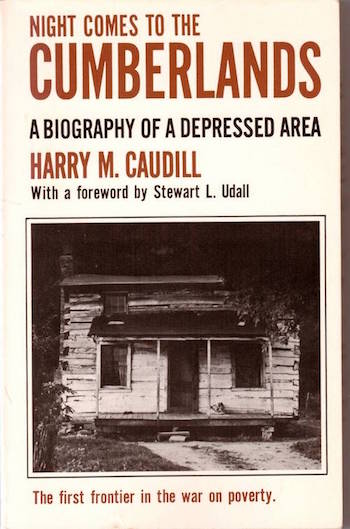 And now for some equally awkward artistic interpretations of the 2016 presidential candidates that are making the rounds on social media: 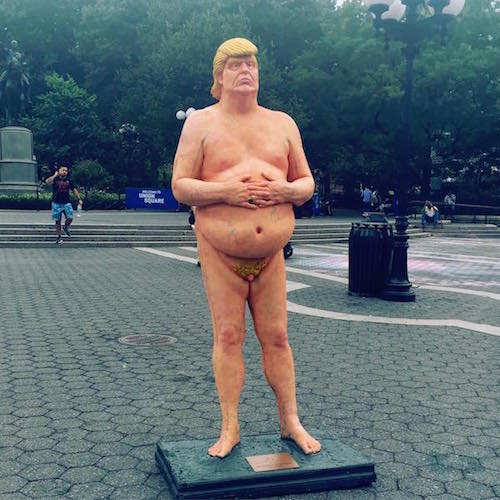 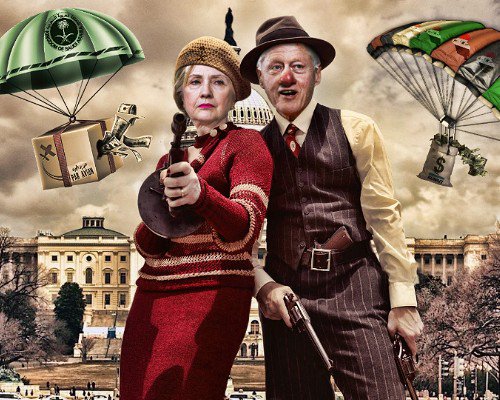 This blog’s mission is to provide the public service of helping make the issues that rural America is grappling with part of national discourse.
Have thoughts or reactions to this or any other piece that you'd like to share? Send us a note with the Letter to the Editor form.
More articles by Rural America In These Times
ViewpointRural America
Dear Congress: Say No to Water Privatization in the Infrastructure Bill
Water costs have soared in recent years as federal funding for water infrastructure has shrunk. Privatization is the last thing we need.
Rural America
An Open Letter to Biden from Indigenous Peoples
Trump wrecked the relationship between the U.S. government and Native nations. Here's how the Biden Administration can repair this damage.
Rural America
In Less Than One Generation, We’ve Lost More Than 10 Million Acres of the Best U.S. Farmland
Similar articles
Rural America
“Strange Paradox:” Rural Towns Surrounded By Farmland Are Losing Food Access
In many rural areas, dollar stores are replacing grocery stores. An Illinois town responded by opening a community-owned market.
Amanda Pérez Pintado
Rural America
In the Southeast, Climate Change Finds a Landscape Already Ravaged by Inequality
Meet the groups demanding climate justice that fits the region's unique needs.
Paul Gordon
LaborRural America
Meatpacking Workers Say Attendance Policies Force Them to Work With Covid-19 Symptoms
As the pandemic rages, punitive attendance policies at corporate meat plants coerce sick workers into showing up, according to activists, experts and the workers themselves.
Heather Schlitz
Join our newsletter
Fearless journalism, emailed straight to you.
Subscribe and Save 59%