This story was first published at the Intercept.

“Her stiffest criticism of Bernie is effectively that they agree on everything, and she thinks she can get it done better,” said WFP's Joe Dinkin.

THE LAST FEW days have seen a rapid consolidation of the establishment behind Joe Biden, following his expected but decisive win in South Carolina. Both former South Bend Mayor Pete Buttigieg and Sen. Amy Klobuchar dropped abruptly out of the race and threw what weight they had behind the former vice president. Many of their high-dollar donors announced they’d be following suit. Beto O’Rourke and a host of other high-profile Democrats, including former Senate Majority Leader Harry Reid and Sen. Tammy Duckworth, then came out with their own public endorsements of Biden. After months of indecision, the Democratic establishment had made up its mind — though the question of former New York City Mayor Mike Bloomberg and his billions still looms.

Some on the left, in turn, ramped up their calls for Sen. Elizabeth Warren to drop out and endorse Sen. Bernie Sanders. Since Sanders is leading, their argument goes, the progressive movement needs to show a unified front against the newly formed establishment bloc. Warren staying in, then, risks splitting the progressive vote. Ahead of Super Tuesday, some voices on the left equated her refusal to drop out with a betrayal of the progressive movement — amplified further by her recent embrace of Super PAC assistance. They even go so far as to suggest that Warren is only in the race to undermine Sanders at this point and perhaps to win some consolation prize from Biden.

Joe Dinkin, a spokesperson for the Working Families Party, which backed Sanders in 2016 but is behind Warren in 2020, argued that such an assessment was confused on multiple fronts. Sanders and Warren, he said, still need each other both in the race, and when it comes to the convention, Warren’s delegates will wind up on the progressive side of the equation in the end.

“If you’ve watched Warren closely, you know she first came into public life to destroy Biden’s bankruptcy bill. She’s been in a fight with the Wall Street wing of the Democratic Party for about 15 years,” Dinkin said. (The Intercept has previously written on the bankruptcy bill fight.) ​“It’s totally obvious to me that Warren is a progressive and will work to ensure we have a progressive nominee.”

THE ARGUMENT THAT Warren should drop out rests on a few assumptions that could very well be mistaken. The first is that her doing so now would be better for Sanders than it would be for Biden — an assumption that involves complicated assessments of delegate math and second choices.

A Quinnipiac poll from early February showed that 33 percent of Warren supporters said Sanders would be their second choice. That’s substantial, but about 7 percent of Warren voters said they’d pick Klobuchar as their second choice, 25 percent said they’d pick Buttigieg, and 8 percent said they’d go for Biden. So Sanders could get a third of Warren votes if she dropped out now, but, if Biden receives the bulk of the Buttigieg and Klobuchar votes, Biden could get 40 percent.

Sanders has significantly consolidated the left and is likely to remain viable — that is, collect delegates — just about everywhere in the country. If a candidate comes in below the 15 percent threshold of viability, their delegates are distributed to other viable candidates. In California, Texas, and Virginia, Warren is on the cusp of viability. If she ends up collecting those delegates tonight, she can hold on to them until the convention and release them with an endorsement of Sanders. If she drops out or falls below viability, those delegates get split between Sanders, Biden, and Bloomberg — with Sanders taking roughly 30 percent, if the polls hold, and the rest going to the establishment candidates. That gives the moderate wing of the party a clear path to a collective majority of delegates, which they could and would use to deny Sanders the nomination. 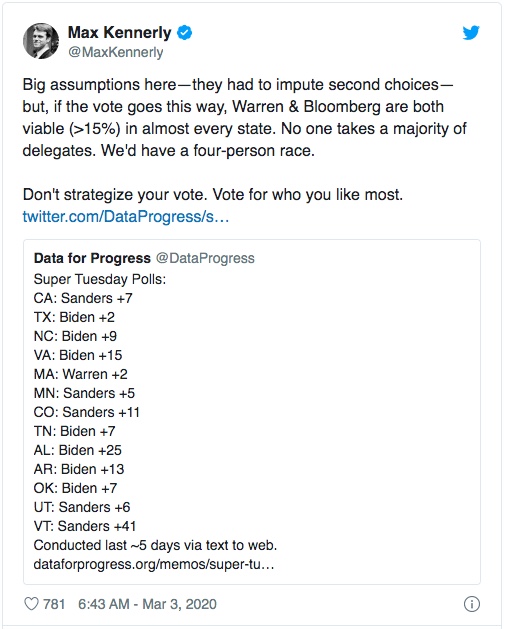 Voters who are still with Warren, Dinkin argued, are voters she is keeping away from Biden.

“Warren is providing more on-ramps for the progressive movement. If Warren is picking up delegates tomorrow, more progressive delegates headed to the convention is a good thing for all of us, whether you support Warren or Sanders,” he said.

Indeed, we’ve known for months that Warren, Buttigieg, and Klobuchar have been fighting over the same mix of college-educated voters. And Warren does have some key electoral advantages over the remaining frontrunning competitors. She’s the only woman running, and she’s the youngest candidate in the race.

“One of Warren’s unique talents is that she is bringing new people into the progressive movement. She’s been attracting voters who could have been supporting Biden or Pete behind a candidate who’s for Medicare for All, a wealth tax, the Green New Deal, and universal child care,” Dinkin said.

That’s a point that another pro-Warren group, the Progressive Change Campaign Committee, is now making as well.

Another Quinnipiac poll from February found that 26 percent of Buttigieg voters ranked Klobuchar as their second choice, and 26 percent ranked Warren. Biden by contrast, was next with 19 percent, and Sanders a mere 11 percent.

There has been some speculation, including from vocal Warren supporters, that Warren’s strategy is to go to the convention to convince Biden delegates to support her as a compromise candidate to stave off Sanders’s nomination. Her campaign manager, Roger Lau, even sent out a memo on Sunday that said ​“the convention in Milwaukee is the final play” for their campaign, and they aim to ​“ultimately prevail at the national convention in Milwaukee.”

It’s not hard to understand why some read that as Warren saying her strategy rests on convincing superdelegates in the second round to back her, even if she doesn’t win a single state and even if the Democratic establishment makes their preference for Biden decidedly clear.

But this forgets a campaign truism: Every candidate is 100 percent in-it-to-win-it until the very second they drop out. Just moments before Buttigieg suspended his campaign, for instance, he was pledging to go all the way to the convention. There’s no other way to keep supporters committed and fired up. Signaling a possibility that you’ll soon drop out sends voters fleeing for more stable candidates. The rationale a candidate gives for staying in a race should not be taken either seriously or literally; candidates are simply in until they’re not.

Backers of Sanders, and those who hope progressive infighting doesn’t hand the nomination to Biden, worry that Warren’s recent attacks on Sanders suggest she won’t be an ally in the end. That’s a misreading too, Dinkin said. ​“Her stiffest criticism of Bernie is effectively that they agree on everything, and she thinks she can get it done better,” he said.

Still, the stiff criticism is creating real consternation. ​“Senator Warren has been an ally of the progressive movement throughout her entire career. But I hope she stops attacking Senator Sanders and publicly commits to give her delegates to him if he has more votes to ensure a progressive wins the nomination,” Alexandra Rojas, executive director of Justice Democrats, told Buzzfeed News in a statement Monday.

“I’d say the same to Bernie,” Rojas added. ​“Pursuing the nomination through a contested convention without accumulating the most delegates would be harmful for our movement, our party, and the policies she’s spent her life fighting for.”

ANOTHER REASON IT could be more helpful for progressives for Warren to keep competing, rather than duck out now, is because Warren has shown her ability to go hard on her opponents and create tests for them that they fail. While Biden did fine in the South Carolina debate, the media, fundraising class, and Democratic establishment are now hoping nobody remembers his abysmal, sleepy, awkward performances over the last year and previous nine debates. Sanders also has legitimate trouble going after Biden, due to the fact that he has trouble attacking people he considers friends. (See also: Warren.) While Sanders’s campaign surrogates have attacked the former vice president for his decadeslong support for cuts to Social Security, Sanders himself has kept his criticisms extremely mild, even apologizing for an op-ed one of his surrogates wrote that argued Biden had a corruption problem. ​“It is absolutely not my view that Joe Biden is corrupt in any way,” Sanders said.

On Monday night in Minnesota, on the eve of Super Tuesday, Sanders said this of Biden: ​“I mean this very sincerely: Joe Biden is a friend of mine, I’ve known Joe for a very long time. Joe is a decent guy. He’s just wrong on the issues. He’s just wrong with his vision for the future.” That might not be the most compelling argument for an electorate that wants more than anything to beat Donald Trump.

Warren spent much of this campaign laying off Biden, which has fueled the skepticism that she’ll truly take him on. But on Saturday night, she accused Biden of being someone ​“so eager to cut deals with Mitch McConnell and the Republicans that he’ll trade good ideas for bad ones.” And on Monday night rally in Los Angeles, she whacked him again.

“No matter how many Washington insiders tell you to support [Biden], nominating their fellow Washington insider will not meet this moment,” she warned. ​“Nominating a man who says we do not need any fundamental change in this country will not meet this moment. Nominating someone who wants to restore the world before Donald Trump, when the status quo has been leaving more and more people behind for decades, is a big risk for our party and our country.”

A final advantage to both candidates staying in could be on the debate stage. An affair that pits Bloomberg as a Sanders attack dog and leaves Biden as a statesman could be a disaster for Sanders. With Sanders laying out his vision for the country and Warren attacking Biden and Bloomberg, the playing field is leveled, if not tilted toward the progressives.

“When you think about the March debate,” Dinkin said, ​“wouldn’t it be great to see Warren and Sanders team up to give Biden’s record the scrutiny it deserves?”

All of that, of course, depends on Warren continuing to win delegates. If on Tuesday night, Klobuchar and Buttigieg refugees pushed Warren slightly higher, she has reason to stay in. If not — if she bottoms out instead — there’s little reason to persist.

See the options
Have thoughts or reactions to this or any other piece that you'd like to share? Send us a note with the Letter to the Editor form.
Similar articles
Feature
Michel Foucault, Neoliberalism and the Failures of the Left
Rather than criticizing and working against the rise of a free market-oriented liberalism, sociologist Daniel Zamora argues that Foucault was actually somewhat sympathetic to it.
Daniel Zamora and Dave Zeglen
Feature
The Most Important Thing Missing from Coverage of Syria: The Perspectives of Syrians Themselves
Given that Syrians are the ones most affected by the conflict, it's remarkable how little we hear from them.
Eli Massey
Feature
I Saw the Good, Bad and Ugly of Donald Trump Supporters at His Chicago Rally
Not all Trump supporters in Chicago on Friday were racist. But some definitely were.
Branko Marcetic
Join our newsletter
Fearless journalism, emailed straight to you.
Subscribe and Save 66%