On May 8, Noem threatened the tribes with unspecified ​“legal action” unless they removed their checkpoints. The tribes did not. No legal action was taken, no lawsuit was filed.

“She doesn’t have a legal leg to stand on,” said Lembrich, an Indian-law expert and the legal director of the voting-rights group Four Directions on the Rosebud Sioux Reservation.

“Noem’s attorneys should explain to her that a lawsuit, or legal action, has to be based on actual law,” he said. ​“She’s got nuthin’.”

In a May 12 letter to the tribes, Noem appeared to waver again. She did not mention ​“legal action” this time, but rather asked the tribes to remove their checkpoints from ​“U.S./State Highways” on the reservation and place them instead only on access points to these roads and on ​“Tribal/​BIA roads.” The tribes have not modified the locations of their checkpoints.

According to Lembrich, Noem’s distinction between the types of highways is incorrect. The standoff revolves around jurisdiction over highways within Sioux reservations, and all the roads in question are inside reservation boundaries, he notes. In 1990, the Cheyenne River, Rosebud, Oglala and Standing Rock Sioux tribes won a federal lawsuit challenging the state of South Dakota on a similar issue concerning jurisdiction over reservation highways. The Eighth Circuit Court of Appeals combed through U.S. laws and court decisions and ruled that tribes are in the driver’s seat on reservation roads. If states want legal control there, they must get tribal consent.

Noem’s latest suggestions are also not remotely realistic, according to Lembrich. ​“It would require incredible manpower [for the tribe] to cover all the little streets and roads and paths and driveways that connect with the larger roads,” he said.

Noem’s office did not respond to requests for a comment on the applicability of the 1990 decision to her demands.

The Sioux tribes’ decisions to set up the checkpoints have a grim context: At publication time, the state had the fastest rising Covid-19 infection rate in the nation, according to the COVID Tracking Project, and the state government had failed to take serious steps to address it. Tribes nationwide have instituted control measures and undertaken vigorous testing. The Navajo Nation has been particularly hard hit.

Lembrich thinks stirring up controversy around the checkpoints is nothing more than a media ploy. He sees it as part of what appears to be Noem’s ongoing audition for a Trump administration position, described at length in the New York Times.

“She used to be a Congressperson and doesn’t want Washington to lose sight of her now that she’s somewhere out in South Dakota,” he said. ​“She wants the MAGA crowd to see her as someone who will stand up for the president and pick on non-white people.”

Like several Republican governors, Noem has refused to mandate ​“draconian” coronavirus-related measures, such as business closures and stay-at-home orders. In mid-April, when Sioux Falls, South Dakota developed the nation’s biggest Covid-19 cluster, with hundreds of sick workers at a pork-processing plant, she took it as an opportunity to announce a statewide clinical trial for hydroxychloroquine, an unproven Covid-19 remedy the president was touting. The clinical trial has gotten off to a slow start, with few signing up, perhaps because a recent Veterans Administration study showed that the drug increases the likelihood of death in Covid-19 patients.

“We at Cheyenne River don’t want hydroxychloroquine under any circumstances,” said tribal elder Marlis Afraid of Hawk. ​“We are not going to be guinea pigs. It’s another form of genocide.” 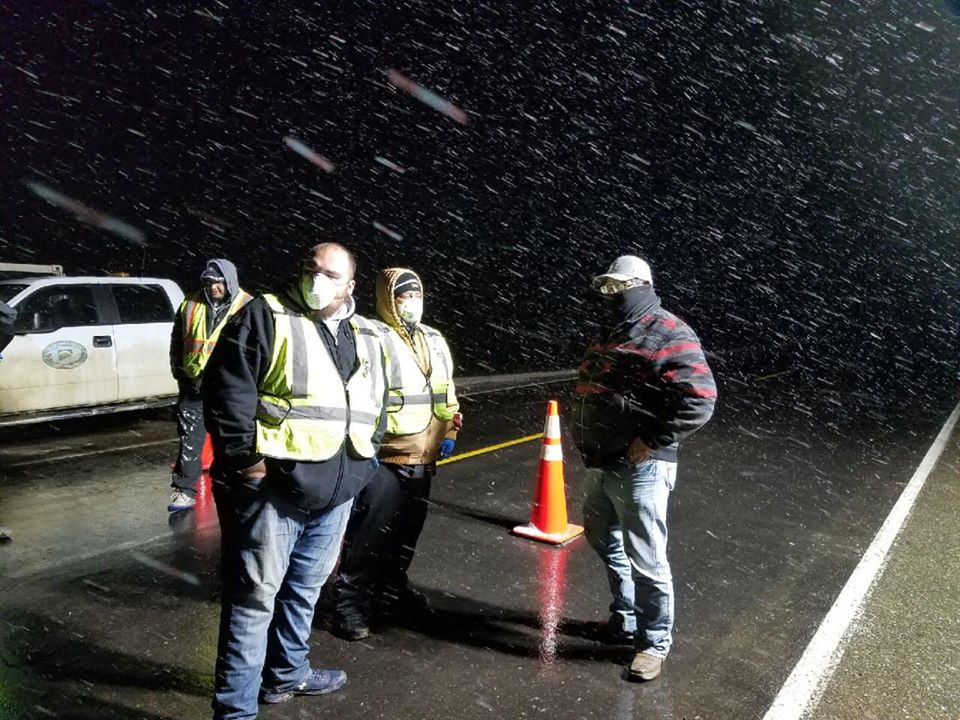 At a Cheyenne River Sioux Tribe border checkpoint, officer Jordan Carter helps ensure that her tribe is doing what it can to protect everyone living on its reservation. She questions arriving drivers and their passengers and separates them into those who can proceed — including reservation residents and essential travelers such as medical workers — and those who must choose another route.

The latter group includes non-resident and non-essential travel and is directed by Carter and co-workers to nearby options in South Dakota’s east-west/north-south highway grid. Choices include two busy interstates and South Dakota’s many picturesque, lightly traveled two-lane roadways, with views of rolling prairie and distant buttes and mountains.

The re-routing isn’t a burden, Carter said, as ​“it usually adds only about twelve minutes to their trip.”

In a May 12 radio broadcast, Frazier said he was amazed that the checkpoints had garnered so much attention, given that prior tribal pleas for coronavirus test kits and personal protective equipment for health-care workers had gone ignored.

“The greatest right is the right to life,” Frazier said. Now that his people are taking steps to protect it, he added, they are facing criticism.

Tribes have a nation-to-nation relationship with the United States and the right to control their own affairs on their own homelands, explained South Dakota Senate Minority Leader Troy Heinert, a Rosebud Sioux tribal member and a Democrat who represents several south-central South Dakota counties.

“We are the masters of our destiny and live the way our Creator intended,” Heinert said. It’s called tribal sovereignty, and he cites treaties, Congressional acts, U.S. Supreme Court rulings, presidential executive orders, and federal case law, including the 1990 Eighth Circuit decision. ​“Any assault on sovereignty goes clear back to the treaties. We are nations within a state.”

“When people of South Dakota travel to any other state, they know they have to obey local laws there,” he went on. ​“Why is it a surprise that a person also has to obey the laws on an Indian reservation?”

On May 9, Heinert and a bipartisan group of state legislators sent a letter to Noem, objecting to her threatened legal action.

“We do not wish to be party to another lawsuit that will ultimately cost the people of South Dakota more money,” they wrote. They asked for a meeting. ​“We wish to work with all parties involved for a reasonable, legal, and appropriate solution that addresses the concerns of all sovereigns involved.”

In the meantime, says Heinert, tribal members are taking great care. ​“We are wearing masks, hand-washing, and social-distancing. Some of us have stay-at-home orders. This is not the first pandemic we’ve been through.” 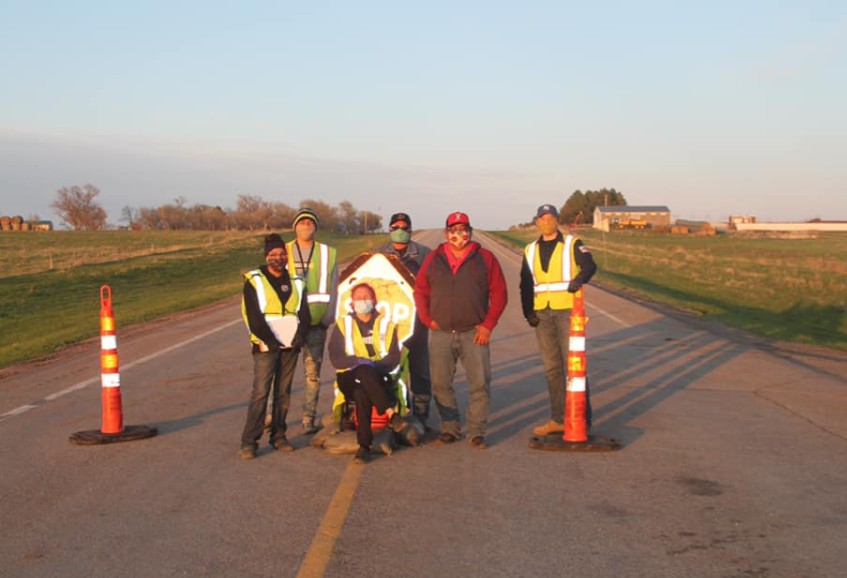 ‘The tribes can’t win if it comes through their borders’

Surges of deadly disease have laid waste to Native American communities since the late 15th century, when Europeans brought typhus, influenza, diphtheria, measles, tuberculosis, smallpox, and other infections to which this hemisphere’s millions of inhabitants had no immunity. In little more than a century, an overwhelming majority had died.

Native vulnerability to these imported diseases has continued into modern times, with devastating results, according to an article in the Journal of Emergency Medical Services. The 1918 flu pandemic, for example, drove some Alaska Native communities to extinction.

The circumstances in which the tribes operate today’s roadway checkpoints are similarly grave.

Underlying health conditions, including diabetes, make many tribal members especially vulnerable to Covid-19. And if they become seriously ill with it, they may not be able to get the care they need. The hospital on the more than 4,000-square-mile Cheyenne River Sioux Reservation has no ICU, and the nearest critical care is three hours away, Frazier told CNN. As a result, Cheyenne River and other tribes fear dreadful consequences if the pandemic sweeps through their communities. At publication time, the Oglala Sioux reported five infections, and the Rosebud Sioux reported fourteen.

“Once Covid-19 comes here, it’ll get out of control fast,” said Lembrich. ​“This is the war [the tribes] can’t win if it comes through their borders.”

To fend off the danger, the tribes worked with the state’s Department of Transportation and local counties and municipalities to design checkpoints for those arriving at their borders, says Cheyenne River spokesperson Remi Bald Eagle. The stops went into action in early April.

And the process has worked. Later that month, Cheyenne River Sioux Tribe officers found that a tribal member returning from Sioux Falls had Covid-19 symptoms. The person, to date the reservation’s only confirmed Covid-19 case, is now hospitalized. Chairman Frazier thanked those who had pinpointed the case. He instituted a reservation-wide curfew and stay-at-home order and asked for prayers for the patient.

“We need to stand as a family, stand together, stay positive,” Frazier said. “[This is] in our culture.”

Afraid of Hawk agreed and applauded Frazier for his determination. ​“Our chairman is doing an awesome job,” she said.

Before the state of South Dakota weighed in, the Bureau of Indian Affairs, an Interior Department division, had given the tribes an ultimatum to close the checkpoints before the agency apparently backed down. In early April, the agency told the Cheyenne River Sioux Tribe it had 24 hours to get rid of the roadway checks or face unnamed ​“consequences.” The tribe did not remove the checkpoints, and in any case the 24 hours had already expired by the time the tribe received the BIA directive, says Bald Eagle.

No consequences ensued. ​“We wondered what they were,” Bald Eagle says. ​“Were they going to take out the ruler, count to three?”

The BIA did not respond to requests for a comment on the checkpoint controversy.

Meanwhile, Carter and her fellow officers are still watching over their tribe’s borders. Says Carter, ​“There’s nothing I love more than making sure my reservation is safe.”

Stephanie Woodard is an award-winning journalist who has written investigative articles for In These Times. Her new book is American Apartheid: The Native American Struggle for Self-Determination and Inclusion.
Have thoughts or reactions to this or any other piece that you'd like to share? Send us a note with the Letter to the Editor form.
More articles by Stephanie Woodard
FeatureInvestigationGoodman Institute
Mining Companies Strike Gold by Destroying Public Lands
Indigenous tribes sound the alarm about a mining boom
DispatchRural AmericaThe Wisconsin Idea
Native Voters Could Swing the 2020 Election—If They’re Able to Vote
Menominee tribal citizens are working to make Native votes count in Wisconsin
Rural America
Bringing Back the Buffalo Was Always Important to the Rosebud Sioux. The Pandemic Made It Urgent
Similar articles
LaborRural America
After Yellowstone Floods, Tourism Workers Lose Their Jobs—And Their Housing
Many Yellowstone workers depend on their bosses for a place to live. When the flood washed away their jobs, they lost their housing, too.
Joseph Bullington
ViewpointRural America
The Time Has Come to Demolish Glen Canyon Dam
Amid a worsening drought in the Southwest, the controversial dam on the Colorado River is ceasing to serve its purpose. It’s time to tear it down.
Gary Wockner
Rural America
From Mad Cow Disease To a Failed Pandemic Response
Health officials did too little, too late to control an outbreak of mad cow disease in the 80s. Sound familiar?
Frank Carber
Join our newsletter
Fearless journalism, emailed straight to you.
Subscribe and Save 59%