10 Things Secretary of Agriculture Sonny Perdue Should Do Right Away

On his first day on the job as the long-awaited new secretary of the U.S. Department of Agriculture (USDA), Sonny Perdue, a former two-term governor of Georgia, addressed two very different audiences. First, in his formal introduction to USDA staff, Perdue laid out his general vision for the department’s next four years. Perdue said:

“The only legacy I seek is the one that any grandparent seeks — that is to hand off our nation … our fields and our farms to the next generation in better shape than we found it.”

His second engagement was a meeting with President Trump and 15 agricultural producers from around the country. The roundtable featured mostly large-scale meat, dairy, grain and specialty crop producers, as well as the current North Carolina Commissioner of Agriculture, Iowa Secretary of Agriculture, and former California Secretary of Food and Agriculture.

In Perdue’s first two major outings we can already see signs of the push-pull that will no doubt influence this administration’s work on agriculture. On the one hand, the secretary has pledged to support the diversity of American agriculture, including small, mid-sized, and organic family farms, as well as young and beginning farmers and the growing local/​regional food industry. He has also repeatedly made statements indicating that land stewardship and natural resource conservation would be cornerstones of his tenure.

On the other hand, President Trump and Secretary Perdue have surrounded themselves almost exclusively with large-scale, industrial commodity farm and business owners. They have yet to offer substantive details about how they will address the growing economic crisis in agriculture. At the same time, they’ve proposed huge budget cuts to programs that assist farmers and rural businesses and communities.

If Secretary Perdue truly wishes to be a champion for the entire American agricultural community in all its breadth and diversity, these are the the things he should take leadership on right away:

1. Finalize the Farmer Fair Practices Rules and issue a plan for enforcement.

The Farmer Fair Practices Rules (FFPR), which the Trump administration has already delayed several times, are designed to balance the power between contract meat and poultry producers and vertically integrated processing companies — a balance that is currently skewed entirely in the favor of the corporations. These rules would provide contract farmers with basic protections, like the right to know how their pay is calculated, protection from retaliation if they speak out against abusive practices, and the right to seek justice in court if they believe they have been treated unfairly.

2. Protect family farmers by rejecting the president’s proposed cuts to USDA, including the proposed elimination of the Rural Business Cooperative Service.

President Trump’s ​“skinny budget” clearly showed that agriculture and rural America were not a priority for this administration. The draconic cuts proposed in the president’s first budget proposal would slash USDA’s budget by a whopping 21 percent and in some cases eliminate entire suites of programs and services.

Among the programs currently on the chopping block are rural water and wastewater management, cooperative, and business programs — programs with a proven track record of success both in terms of business survivability rates and job creation. To call such vital programs ​‘underperforming,’ as the skinny budget does, reflects a lack of understanding of their function and impact.

Conservation programs like the Conservation Stewardship Program (CSP) and the Environmental Quality Incentives Program (EQIP) confer significant benefits to farmers, ranchers, and forest owners by providing payments to help them improve and protect their natural resources and reduce the amount and cost of on-farm inputs. As an agriculture secretary who has repeatedly cited his and his family’s commitment to stewardship, we expect Secretary Perdue to stand against any attempted cuts to CSP or EQIP during the appropriations process and to also fight for adequate funding in the 2018 Farm Bill.

4. Create opportunities for the next generation of farmers and ranchers.

Access to credit and financing is critical for farmers and ranchers, particularly those just beginning their career in agriculture. Historically, the demand for USDA’s Farm Service Agency (FSA) loans — critical for beginning farmers who often cannot access private loans because of their lack of capital and production history — has greatly outstripped FSA’s available funding. Secretary Perdue should be the voice of America’s beginning farmers and ranchers by advocating for adequate funding levels for FSA loan programs in FY 2017 and 2018.

Investing in regional food system infrastructure will boost economic growth by creating jobs and opening new markets in both rural and urban communities. It will also help farmers and ranchers become more resilient by helping them to diversify their operations through new and non-traditional market opportunities. Lastly, greater investment in local/​regional food infrastructure will also help to address our country’s obesity epidemic by increasing access to healthy food in rural and urban food deserts.

6. Strengthen our food security and climate resilience by scaling up and strengthening agricultural research programs.

Nobody is born knowing how to farm or raise animals. Farmers and ranchers learn best practices the same way professionals in other fields do, through trial and error, advice from peers and industry research. As such, USDA’s competitive grant programs for research, extension, and education are critical parts of a robust and resilient future for food and agriculture. Secretary Perdue should be a champion for these programs by advocating for increased funding and support in the FY 2017 and 2018 appropriations bills and in the 2018 Farm Bill.

7. Get USDA’s house in order by issuing overdue Requests for Applications immediately.

Numerous agencies within USDA are currently sitting on overdue Requests for Applications (RFAs). RFAs are the means by which farmers, farm advocates, and researchers access USDA funds for competitive programs. Currently, two major RFAs for fiscal year (FY) 2017 are overdue:

8. Focus on substantive improvements to programs and policies, not on reshuffling USDA to make room for a new Under Secretary.

In his written responses to questions from members of the Senate’s Agriculture Committee, Secretary Perdue indicated he would want to create a new position to deal with trade issues — the Under Secretary for Trade. With so much critical work to get done in 2017, Secretary Perdue should focus his efforts on improving USDA policy and programs rather than creating a new, duplicative position.

In the mid-1990s the Supplemental Nutrition Assistance Program (SNAP), formerly known as food stamps, transitioned from a paper to an electronic benefits system (EBT). In the years following the transition SNAP purchases at farmers markets have steadily declined, primarily due to a lack of equipment and technology to accept and process the electronic benefits. USDA has made numerous attempts to resolve this issue, but to date the department’s responses has been incremental and ad hoc at best.

Given the complexity and importance of resolving this issue, Secretary Perdue should move forward expeditiously with the development of a comprehensive, department-wide strategy.

FSMA established sweeping food safety requirements for farm that producing fruits and vegetables, among other requirements for participants across the food supply chain. Though all of the seven major FSMA rules have now been finalized, there remains widespread confusion in the food-producing community about which rules apply to whom, and how to comply. In order to ensure that these new rules are protecting the public while not unduly burdening small and mid-sized family farm operations, Secretary Perdue should: 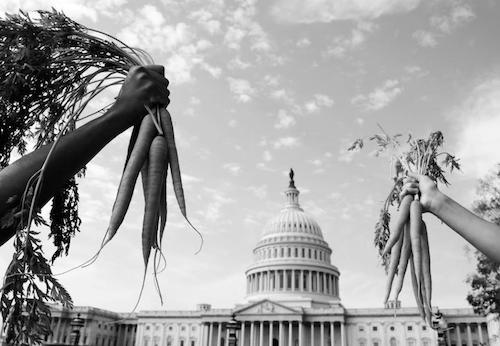 This article was adapted from a longer version on the National Sustainable Agriculture Coalition’s website and is reposted with permission from the author. (Image: sus​tain​ablea​gri​cul​ture​.net)

Reana Kovalcik is the Associate Director for Communications and Development at the National Sustainable Agriculture Coalition (NSAC) — an alliance of grassroots organizations that advocates for federal policy reform to advance the sustainability of agriculture, food systems, natural resources and rural communities.
Have thoughts or reactions to this or any other piece that you'd like to share? Send us a note with the Letter to the Editor form.
Similar articles
LaborRural America
After Yellowstone Floods, Tourism Workers Lose Their Jobs—And Their Housing
Many Yellowstone workers depend on their bosses for a place to live. When the flood washed away their jobs, they lost their housing, too.
Joseph Bullington
Rural America
Five Ways Pope Francis Can Overcome the Irony that Threatens Laudato Si’
Libby Comeaux
Rural America
Local Economies to Save the Land and the People
Wendell Berry
Join our newsletter
Fearless journalism, emailed straight to you.
Subscribe and Save 59%