Rural America In These Times September 18, 2017

On September 14, the U.S. Forest Service, which manages 193 million acres of public lands, announced that the cost of fighting this season’s massive wildfires in the Pacific Northwest, Northern Rockies and elsewhere had exceeded $2 billion dollars — making 2017 the agency’s most expensive year on record.

According to the Department of Agriculture (USDA), which oversees the Forest Service:

“At the peak of Western fire season, there were three times as many uncontained large fires on the landscape as compared to the five-year average, and almost three times as many personnel assigned to fires. More than 27,000 people supported firefighting activities during peak Western fire season. The Forest Service has been at Preparedness Level 5, the highest level, for 35 days as of September 14, 2017. Approximately 2.2 million acres of National Forest system lands have burned in that time.”

In order to cover the cost of ​“continuous fire activity” and ​“an extended length of the fire season,” the Forest Service has been forced to borrow funds otherwise allotted for its land management and fire prevention initiatives. Without speculating as to why we’re seeing more and more wildfires (i.e. avoiding the subject of climate change entirely), Secretary of Agriculture Sonny Perdue and Tony Tooke, the recently appointed Chief of the Forest Service, are calling on Congress to change the way the Forest Service’s emergency firefighting efforts are funded.

“Forest Service spending on fire suppression in recent years has gone from 15 percent of the budget to 55 percent — or maybe even more — which means we have to keep borrowing from funds that are intended for forest management,” said Perdue at a recent press conference. ​“We end up having to hoard all of the money that is intended for fire prevention, because we’re afraid we’re going to need it to actually fight fires. It means we can’t do the prescribed burning, harvesting, or insect control to prevent leaving a fuel load in the forest for future fires to feed on. That’s wrong, and that’s no way to manage the Forest Service.”

Perdue says he would prefer that Congress treat major wildfires the same as other disasters, like hurricanes and tornados that are covered by emergency funds, so that the agency’s fire prevention programs are not raided. Currently, the Forest Service’s fire suppression budget is funded at a rolling ten-year average of appropriations. This fiscal year, Congress approved additional funding — almost $1.6 billion total — but it still wasn’t enough.

“We are breaking records in terms of dollars spent, acres of National Forest land burned, and the increased duration of fires,” says Forest Service Chief Tony Tooke, who recently toured charred parts of the country with Sonny Perdue. ​“Our firefighters are brave men and women, who risk their own lives to protect life and property. We must give them every opportunity to do their jobs effectively through better management of the forests in the first place.” 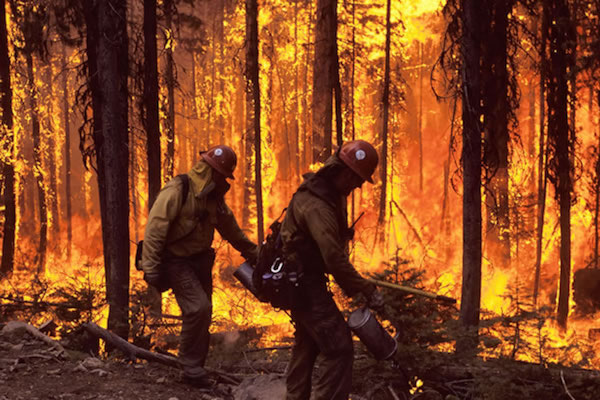 Perdue’s renewed call for Congress to change the way the Forest Service’s firefighting efforts are funded echoes a speech he made one week earlier, at Tony Tooke’s swearing in ceremony:

Every year, when we have to take, in the Forest Service, and hoard our appropriated dollars in order to have money to fight the fires, where we know they are going to be insufficient, that’s wrong. We need with all of our heart and strength and mind, Tony, to appeal to the appropriators in Congress, and the law writers, to fix the fire borrowing problem once and for all.”

In the West, dozens of fires continue to burn out of control in Montana, Oregon and other parts of the region suffering from severe drought over the summer. In total, more than 200 Service employees are deployed in response to these fires, which have already burned more than 8 million acres and destroyed over 500 homes and many other structures. Although coordinated federal and state firefighting efforts have contained four major fires, another 48 fires continue to burn out of control. And just in the past few days, 172 separate new wildfires have been reported to the National Interagency Fire Center in Boise — including eight significant blazes.

For a daily report from the National Interagency Fire Center (NIFC) on fire activity in the United States, click here. And for additional data regarding the economic costs of this season’s wildfires, click here.

Support In These Times
This blog’s mission is to provide the public service of helping make the issues that rural America is grappling with part of national discourse.
Have thoughts or reactions to this or any other piece that you'd like to share? Send us a note with the Letter to the Editor form.
More articles by Rural America In These Times
ViewpointRural America
Dear Congress: Say No to Water Privatization in the Infrastructure Bill
Water costs have soared in recent years as federal funding for water infrastructure has shrunk. Privatization is the last thing we need.
Rural America
An Open Letter to Biden from Indigenous Peoples
Trump wrecked the relationship between the U.S. government and Native nations. Here's how the Biden Administration can repair this damage.
Rural America
In Less Than One Generation, We’ve Lost More Than 10 Million Acres of the Best U.S. Farmland
Similar articles
ViewpointRural America
The Fight to Reclaim Colorado's Privatized Rivers for the Public
A fisherman’s lawsuit pushes back against a tide of wealth-driven privatization that seeks to deny public access to waterways and other public resources.
Mark Squillace
Rural America
How the Covid Land Rush Is Hurting New Farmers
The pandemic has inspired city dwellers and investors to buy land in rural areas. That’s driving up farmland prices and pushing some beginning farmers out of the market.
Sadie Morris
ViewpointRural America
On Environment, Biden Needs to Do a Lot More than Roll Back the Rollbacks
President Trump gutted almost 100 environmental protections. Here’s a list of the ones Biden should undo first and why he must not stop there.
Jonathan Thompson
Join our newsletter
Fearless journalism, emailed straight to you.
Subscribe and Save 66%