Supermarket Checker: ‘If You Want Personality, Then You Come to My Line’ 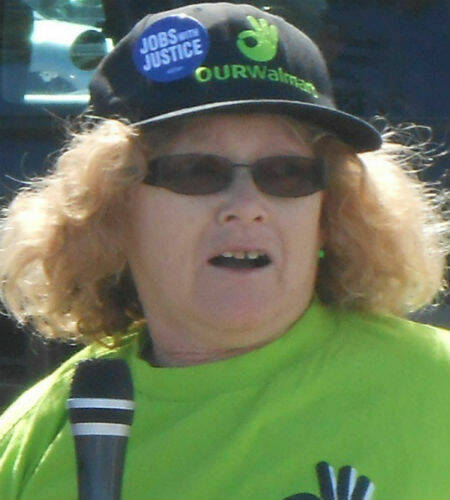 Aubretia Edick, who first worked as a cashier when she was in high school, says that when customers smile as they approach her, 'It's like the sun coming through the clouds after three days of rain.' (Jeff Schuhrke)

For three years in the ear­ly 1970s, jour­nal­ist Studs Terkel gath­ered sto­ries from a vari­ety of Amer­i­can work­ers. He then com­piled them into Work­ing, an oral-his­to­ry col­lec­tion that went on to become a clas­sic. Four decades after its pub­li­ca­tion, Work­ing is more rel­e­vant than ever. Terkel, who reg­u­lar­ly con­tributed to In These Times, once wrote, ​“I know the good fight — the fight for democ­ra­cy, for civ­il rights, for the rights of work­ers — has a future, for these val­ues will live on in the pages of In These Times.” In hon­or of that sen­ti­ment and of Working’s 40th anniver­sary, ITT writ­ers have invit­ed a broad range of Amer­i­can work­ers to describe what they do, in their own words. More ​“Work­ing at 40” sto­ries can be found here.

When Work­ing’s Babe Sec­oli start­ed as a super­mar­ket check­er at 12, there were no cash reg­is­ters — she used to write the prices of items down on a paper bag. She told Terkel, ​“The cus­tomer is always right,” though she dis­liked it when shop­pers were con­de­scend­ing to her or tried to speed up the check­out process.

Aubre­tia Edick also tells In These Times’ Jeff Schuhrke that ​“The cus­tomer is always right.” She is, how­ev­er, quick to add, ​“Except when they’re wrong.” She’s been a cashier at her com­pa­ny for 14 years; she cur­rent­ly works at a super­mar­ket in Mass­a­chu­setts. Her friends know her as ​“Windy,” thanks to a 1967 song by The Asso­ci­a­tion about ​“a per­son who smiles at every­body and talks to every­body.” This inter­view has been edit­ed and abridged.

I’m 64 now. I start­ed as a cashier when I was 16 years old, but I’ve done oth­er jobs since then. I like peo­ple, and every job that I had was deal­ing with people.

Most of the time — like 99 per­cent of the time — we have to bag items our­selves. I’m not fast. If cus­tomers com­plain about my speed, I’ll tell them that if they want speed, they should go to so-and-so’s line. If you want per­son­al­i­ty, then you come to my line. Today, lots of cus­tomers bring in reusable bags, and to me, that’s a pain in the ass [laughs]. At the store we have a carousel that the plas­tic bags are attached to, so they’re eas­i­er to fill up. But those reusable bags flop over, and we’re not used to those bags, so we’re not aware of how items are gonna fit into it.

Cus­tomers also com­plain, ​“Why can’t I get this on food stamps?” Well, I don’t know why you can’t get it on food stamps. The gov­ern­ment made up that rule. So ask them.

Years ago, man­age­ment would tell us about any­thing that was going on in the store or any pol­i­cy changes affect­ing us, like food stamps. Today, they tell a few peo­ple about it and let every­one else find out through gos­sip or whatever.

Man­agers today, they don’t take a per­son­al con­cern about us. We’re sim­ply a num­ber to them. The only time we see a man­ag­er is if there is a prob­lem with us, or if we have a problem.

For exam­ple, our com­pa­ny pol­i­cy says that if a customer’s try­ing to buy alco­holic bev­er­ages and they have four oth­er peo­ple with them, I have to see ID from all five of them. That’s what the pol­i­cy says, and it also says that no one can over­ride my deci­sion. But once, I wouldn’t sell a cus­tomer beer because not every­one with her had an ID. So the man­ag­er came over, and he told me to go ahead and sell her the beer. After­ward, he pun­ished me by mak­ing me take a ​“com­put­er-based learn­ing test”: a video telling you the right way to do things. I had already tak­en it a cou­ple of times, but I had to take it over again. I actu­al­ly called the cor­po­rate office about it, though, and cor­po­rate made him apol­o­gize to me.

Or when I work in the express lane that says ​“10 Items or Less.” If a cus­tomer comes up to me with a bas­ket full of 40 items, as far as man­age­ment is con­cerned, I’m sup­posed to take her. So what’s the sense of hav­ing an express lane? It makes no sense. I know that if I were stand­ing in an express line with one or two items and the cus­tomer in front of me had 40, I’d be pissed. And chances are I’d say some­thing to the cashier. The cashier would explain to me that the man­ag­er says she has to take them and what­not, but I’d still be annoyed at her.

Plus, I was always taught that it was management’s respon­si­bil­i­ty to tell me when to go on my break, but if I leave it up to them I’m not gonna get one. So instead of wait­ing for them, I punch in some num­bers on my reg­is­ter, and they’ll see on this hand­held device they car­ry that I’m going on my 15-minute break.

I’m a very out­spo­ken per­son, so if I’m sup­posed to get a lunch break, I’m tak­ing my break whether you like it or not. I had one man­ag­er give me a hard time about that. She said, ​“Well, your break time depends on how busy the store is.”

I said, ​“No, it doesn’t depend on how busy the store is. Legal­ly, this is what I’m allowed.”

I think the more out­spo­ken you are and the more deter­mined you are, the less they will take advan­tage of you. And it’s just not at this com­pa­ny; I think it’s in all oth­er stores as well.

Right now the sched­ules are real­ly stu­pid [laughs]. There was a time when you had a 40-hour week, and you worked 40 hours, all right? Today, your sched­ule changes from day to day. Some­times it’s like a five-hour shift, some­times it’s a four-hour shift; anoth­er time it could be an eight-hour shift.

You also see a lot of senior cit­i­zens work­ing as cashiers now. Years ago, the cashiers were most­ly kids, like I was. I went every day after school to my store, and they trained me how to be a cashier. They didn’t just stick me on the floor; we were trained how to put the mon­ey in the draw­er. We were trained to put mon­ey fac­ing up with the face going to the left. And the big­ger bills went under­neath the draw­er, and we kept the draw­er neat.

But we were trained! We were trained. In order to get the job to begin with, we had to take a test. We had to know math. Today, they basi­cal­ly just hire you. And they don’t care how you put the mon­ey in the drawer.

What are your favorite and least favorite things about being a cashier?

But when a cus­tomer is smil­ing when they come up to me, it’s like the sun com­ing through the clouds after three days of rain.

One time, a lady was here with her daugh­ter, who was buy­ing all kinds of make­up. The woman was com­plain­ing about how expen­sive it was. What I meant to say was, ​“It’s not cheap to look expen­sive.” But what did come out of my mouth was, ​“It’s expen­sive to look cheap.”

As soon as I said it, I cov­ered my mouth and start­ed apol­o­giz­ing to this woman. I was lucky; she laughed and every­thing. She said, ​“I know what you meant.” The fol­low­ing week, she came back to the store and she got in my line. And she said to the cus­tomer in front of her, ​“Be glad you’re not buy­ing any makeup.”

Jeff Schuhrke has been a Work­ing In These Times con­trib­u­tor since 2013. He has a Ph.D. in His­to­ry from the Uni­ver­si­ty of Illi­nois at Chica­go and a Master’s in Labor Stud­ies from UMass Amherst. Fol­low him on Twit­ter: @JeffSchuhrke

Have thoughts or reactions to this or any other piece that you'd like to share? Send us a note with the Letter to the Editor form.
More articles by Jeff Schuhrke
Labor
Healthcare Workers Are Leading the Largest Strike Ever at the University of Illinois-Chicago
In the face of a deadly pandemic, UIC’s largely Black and Latino hospital workforce is demanding workplace safety and livable wages.
Labor
OSHA Is Failing Essential Workers. Why Not Let Them Sue Their Bosses?
Labor
Weed That’s Legal and Union: Marijuana Dispensary Becomes First in Illinois to Unionize
Similar articles
Labor
Chicago Demands Justice for Wal-Mart Workers
Griffin Bur
Labor
Two Wins for Bangladesh Garment Workers, But The Fight Isn’t Over
David Moberg
Labor
Cutting the Budget, Bleeding Us Dry
Michelle Chen
Subscribe to our free newsletter
Fearless journalism that speaks truth to power
Limited Time: