Since the turn of the year, Congress and the Trump administration have been haggling over legislative priorities for 2018. Many issues are on the agenda, from health care to infrastructure, but there has been little mention of a key priority: The 2018 farm bill.

This comprehensive food and agriculture legislation is typically enacted every four or five years. When I became U.S. secretary of agriculture in January 2009, I learned quickly that the bill covers much more than farms and farmers. In fact, every farm bill also affects conservation, trade, nutrition, jobs and infrastructure, agricultural research, forestry and energy.

Drafting the farm bill challenges Congress to meet broad needs with limited resources. The new farm bill will be especially constrained by passage of the GOP tax plan, which sharply reduces taxes on the wealthy and large companies, and by concerns about the size of the federal budget deficit. Farm bill proponents will have to work even harder now than in the past to underscore the magnitude and impact of this legislation, and the ways in which it affects everyone living in the United States. 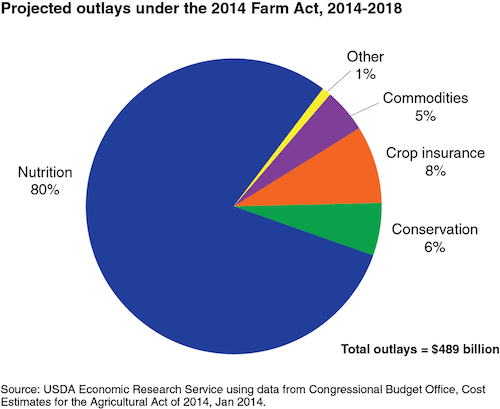 Nutrition programs, mainly SNAP, account for more than three-quarters of spending under the most recent farm bill. (Image: USDA ERS)

Of course the farm bill helps farmers, ranchers and producers. It provides credit for beginning farmers to get started. It protects against farm losses due to natural disasters through disaster assistance and crop insurance. It provides a cushion for the individual farmer if he or she suffers a poor yield or low prices, through a series of farm payment programs tied to specific commodities.

Agricultural trade is critically important to the bottom line for U.S. farmers, ranchers and producers. More than 20 percent of all U.S. agricultural production is exported. Agricultural exports are projected to account for one-third of farm income in 2017.

The farm bill authorizes market access promotion and export credit guarantee programs that are key for promoting exports and generating farm income from exports. These programs provide resources to exporting businesses to aggressively market American agricultural products overseas, and to enable exporters to price our products more competitively on the world market.

All of these provide a stable and secure supply of food for the nation. Along with efficient supply chains, they also allow us to enjoy relatively inexpensive food. On average, Americans spend less than 10 percent of their income on food.

Two issues are likely to arise during the farm bill discussion. First, there will be an effort to impose work requirements for able-bodied adults without dependents. Today, those individuals are required to be in school or working a minimum of 20 hours a week, or their benefits are limited to three months every 36 months.

Second, there will be efforts to limit what people can buy with SNAP benefits — for example, barring their use to purchase soda or other foods that are considered unhealthy. Implementing such restrictions might prove more difficult and costly than policymakers may expect.

Other nutrition provisions in the bill help senior citizens buy goods at farmers’ markets and make fresh fruits and vegetables more readily available to millions of school children. It is easy to see why farm and nutrition advocates historically have worked together to support passage of the farm bill in an alliance that joins rural and urban interests. 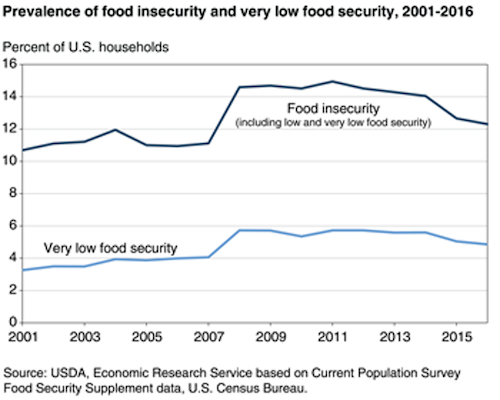 Food insecurity means that access to adequate food for active, healthy living is limited by lack of money and other resources. Very low food security occurs when food intake for one or more household members is reduced and normal eating patterns are disrupted. (Image: USDA ERS)

Only 15 percent of America’s population lives in rural areas, but as the bumper sticker reminds us, ​“No farms, no food.” The farm bill helps make it possible for people who want to farm to stay on the land by funding supporting jobs that provide a second income. It also provides resources to improve the quality of life in rural places.

The farm bill also supports our national system of land grant universities, which was proposed by President Lincoln and created by Congress in 1862. Lincoln envisioned a system of colleges and universities that would expand the knowledge base of rural America by improving agricultural productivity.

Through the farm bill, Congress provides grants for research at land grant universities in fields ranging from animal health to organic crop production and biotechnology. Lincoln would be pleased to know that these programs mirror his vision of increasing agricultural productivity through targeted research shared with farmers and ranchers. 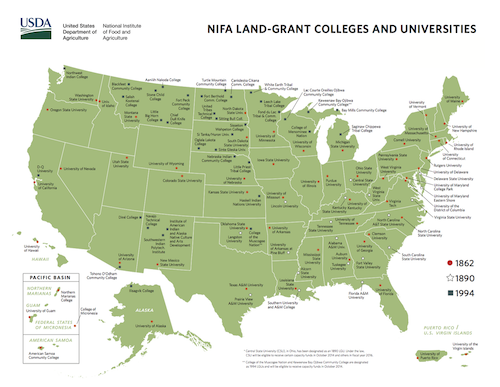 Farmers, with the assistance of the farm bill, can improve soil quality and preserve habitat for wildlife. The farm bill funds voluntary conservation programs that currently are helping more than 500,000 farmers and ranchers conserve soil and improve air and water quality — actions that benefit all Americans.

Producing renewable energy is an important tool for expanding economic opportunity in rural areas. USDA’s Renewable Energy for America Program authorizes investments in small- and large-scale projects including wind, solar, renewable biomass and anaerobic digesters, which farmers can use to produce biogas energy by breaking down manure and other organic wastes. Since 2009 the Renewable Energy for America Program has helped finance over 12,000 renewable energy projects. 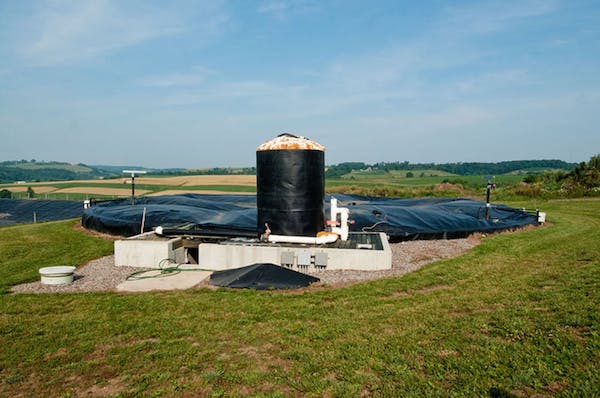 Anaerobic digester systems like this one at Pennwood Dairy Farms in Berlin, Pa., capture biogas for energy production from the breakdown of manure while reducing pathogens and controlling odors. (Image: USDA)

Investing in food and farmers

In discussion of any legislation that affects so many different constituencies, a key challenge is to recognize that multiple interests are at stake and try to avoid pitting groups against one another unnecessarily. If differences become too divisive, the risk of not passing a farm bill grows.

Many programs in the farm bill are authorized only for specific periods of time. This means the ultimate consequence of not getting a bill passed could be that some policies would revert back to outdated ​“permanent” (nonexpiring) laws enacted more than 50 years ago. This would cause major disruptions to the nation’s food system and skyrocketing food costs.

Unfortunately, most people are unaware of the farm bill’s importance because they think it impacts only farmers. Over the next few months, debate and discussion about the farm bill will grow, and hopefully will lead to broader understanding of the bill’s importance. I hope this awareness will encourage Congress and the president to provide the level of investment that is needed to maximize the positive impacts that the farm bill can have for all Americans.

(“What the 2018 farm bill means for urban, suburban and rural America” was first published on The Conversation and is reposted on Rural America In These Times under a Creative Commons license.)

Check out the options
Tom Vilsack served as Governor of Iowa from 1999 – 2007 and U.S. Secretary of Agriculture from 2009 – 2017. He is president and CEO of the U.S. Dairy Export Council (USDEC); a Strategic Advisor of Food & Water Initiatives at the National Western Center as part of the Colorado State University System team; and Global Chair for the International Board of Counselors on Food & Water Initiatives. He serves on the board of Feeding America, GenYouth and Working American Education Fund and the World Food Prize Foundation Board of Advisors.
Have thoughts or reactions to this or any other piece that you'd like to share? Send us a note with the Letter to the Editor form.
Similar articles
Rural America
The Curious Case of Carter County: How a Small Town in Montana Stopped Shrinking
On the Great Plains, these days, rural towns tend to wither. But in remote eastern Montana, one community is bucking that trend. How?
Eric Dietrich
Rural America
Study: “Salmon Remain on the Brink of Extinction. And Time Is Running Out.”
Between dams and warming waters, West Coast populations of wild salmon have plunged by 98%. What will it take to stop the decline?
Tara Lohan
Rural America
The EPA Responded to a Respiratory Virus by Relaxing Pollution Controls
Major polluters were deemed 'essential.' Under EPA policy, environmental and safety inspectors were not.
Victor B. Flatt and Joel A. Mintz
Join our newsletter
Fearless journalism, emailed straight to you.
Subscribe and Save 66%