Trolls Are Sowing Discord Between Sanders and Warren Supporters

Is someone yanking your chain?

As the Democratic primaries approach, relationships between supporters of Sens. Elizabeth Warren (D-Mass.) and Bernie Sanders (I-Vt.), the two most viable progressive presidential contenders to ever face off in the Democratic primaries, are beginning to fray. Though, in general, goodwill continues to prevail — Warren’s campaign team sent dinner and cookies to Sanders’ campaign staff following his heart procedure — lately tempers have been heating up, ignited by injudicious comments and outright nasty jibes that take on a life of their own in social media. Consider these recent examples.

On CNN in September, Emily Tisch Sussman, a former vice president at the Center for American Progress, attempted to shame progressives who support Sanders: ​“If you are still supporting Sanders as opposed to Warren, it’s kind of showing your sexism. Because she has more detailed plans, and her plans have evolved.”

On the Bernie side of the fence, you have political commentator Benjamin Studebaker, who, in a critique of progressive media coverage of the race, had this to say about Warren:

She’s as bad as Hillary. She’s worse, because Hillary made it obvious, and she hides it so well that for months, the left press has gone easy on her. No more. Don’t give her an inch, because she’ll take a mile. Be relentless. She’s Harris. She’s Biden. She’s Booker. Make it so. 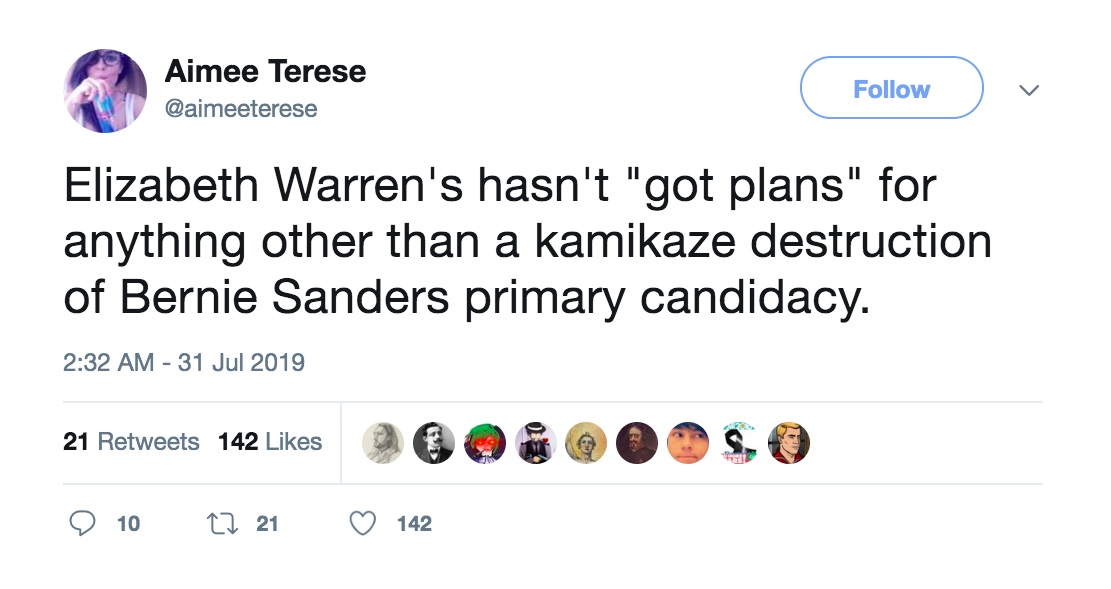 Then there was the brouhaha that erupted when the Working Families Party (WFP), which in 2016 backed Sanders, voted in September to endorse Warren.

WFP polled two groups of people, what it described as ​“tens of thousands” of supporters (party members and/​or subscribers to the party’s online newsletter) and the 56 members of the party’s national committee. The votes of each of the two groups, the supporters and the leadership, were weighted, with each receiving 50% stake in the final outcome. Once the votes were tallied, Warren won 61% of the weighted vote. WFP, however, refused to release the vote tallies from each group as it has in past election cycles, leading Sanders supporters to suspect that their candidate was the preferred choice of the members, and Warren the pick of the party leaders (a group who played a role in the selection process analogous to the Democratic Party’s superdelegates).

Some outraged Sanders supporters lashed out on twitter, attacking Maurice Mitchell, WFP’s national director and Nelini Stamp, WFP’s national organizing director, both of whom are black. This prompted more than 100 black leaders to sign a letter decrying the attacks, that read in part:

[Mitchell and Stamp] are being threatened on a daily basis, by self-identified Sanders supporters, with hateful, violent and racist threats. ​“Uncle Tom.” ​“Slave.” ​“Cunt.” These kinds of threats have no place in our movements, and are reminiscent of the threats Black people would receive when daring to vote …

Indeed, according to screenshots of deleted tweets captured by Time magazine, one Sanders supporter, addressing Mitchell, tweeted: ​“Why not have the balls to respond you cunt. You half man. You corporatist. You SLAVE!” Another pro-Sanders tweeter said of Warren, ​“She wants to bring you back to incremental slavery of neoliberalism. @SenSanders is the progressive future, you [sic] choice stinks of corruption.”

This disturbed Black Lives Matter co-founder Alicia Garza, who has not endorsed any candidate. She wrote on Medium:

When a party issues an endorsement, particularly a party that hones its focus on families that are struggling every day to live with dignity, it is right for those of us who care about the same things to interrogate the process. …

But what we cannot do, what we must not do, is devolve into such nastiness that we wish cancer on their families, call them Uncle Toms who are dancing for slave masters, wish that they would be raped, and the like. I cannot say that we are better than that because I’ve seen the tweets. But what I know is that we who long for freedom and safety and dignity and justice will not win if we cannot be distinguished from the Right

Mitchell says he is pleased that there are ​“two champions of Medicare for All and a wealth tax in this race.” But he is unapologetic about the party’s endorsement:

Senator Warren has an unmatched ability to explain in everyday terms how our economy and democracy got rigged, who rigged them, and how we can unrig them. She’s a fighter for working families who strikes fear into the hearts of Wall Street and Silicon Valley CEOs. We’re so glad there are two leading structural change candidates in this primary, but we’re thrilled to support Warren.

Later that month, attacks against Warren by Sanders supporters again erupted on Twitter after someone with the name @isamuel, a ​“Catholic American Socialist” with more than 16,000 followers, reposted a video clip of an interview in which Warren spoke about her mother being part Cherokee and part Delaware (a claim she was unable to prove and no longer makes). That video, which went viral, originated from a person with the name @AlytaDeLeon, an ​“antiwar Mexican American socialist.” They posted it as if it were a recent video, and not one from 2012 that has long been in circulation. Since joining Twitter in March, @AlytaDeLeon has sent out more than 7,000 tweets. We don’t know why most of the recent ones are devoted to attacking Warren. The person who tweets at @AlytaDeLeon did not respond to multiple inquiries from In These Times.

What we do know is that Russia has already deployed a network of bots and fake social media accounts to sow discord among Democratic voters in 2020, just as it did in the 2016 election. The Wall Street Journal reported that during the June and July Democratic Debates:

Hundreds of social-media accounts with bot-like traits promoted misinformation and content aimed at inflaming racial divisions. … The hashtag #DemDebateSoWhite was tweeted Tuesday [July 30] night by an account from a user with the name Susannah Faulkner and then shared by conservative activist Ali Alexander. The hashtag received thousands of interactions, but … a high number of the accounts using the hashtag had bot-like characteristics. The original tweet appears to have been taken down, but the hashtag continued circulate on Twitter.

It is unclear how many of the attacks on Working Families staff were sent by bots or covert agitators, or where they originated from, but Time reports that many of the attacks were ​“accompanied with the hashtag #BernieorBust,” which was commonly used in 2016 by Russian trolls to sow division between Sanders and Clinton supporters.

That’s not to say policy differences between the candidates shouldn’t be vigorously debated. Progressives need to make an informed decision. Sticking to smart critiques rather than hyperbole and vitriol, however, could also pay political dividends. Warren and Sanders appear set to go to the 2020 Democratic National Convention with substantial numbers of delegates. Should no candidate win on the first ballot, as seems likely, it is hard to see how either could get the nomination without the other’s delegates.

At the debates, Sanders and Warren have stood shoulder to shoulder, defending Medicare for All from tepid centrists. It’s time for their supporters to do the same, and not get baited into flame wars.

Have thoughts or reactions to this or any other piece that you'd like to share? Send us a note with the Letter to the Editor form.
More articles by Joel Bleifuss
Viewpoint
Dear Reader
A farewell message from longtime Editor & Publisher Joel Bleifuss
A Progressive Response to Ukraine
We ought to be able to criticize U.S. empire without denying other bad state actors exist, each with their own objectives.
Viewpoint
Lost Jobs, Lost Democrats
Neoliberal Democrats are struggling to connect with working-class voters whose communities have lost manufacturing jobs.
Similar articles
Viewpoint
Bush’s Selective Mourning
Joel Bleifuss
Viewpoint
The Plague of Potomac Fever
David Sirota
Viewpoint
Political Climate Change
Joel Bleifuss
Join our newsletter
Fearless journalism, emailed straight to you.
Subscribe and Save 59%