The Food and Agriculture Organization of the United Nations (FAO) — an intergovernmental global alliance with the mission of ending hunger and poverty wherever it exists — was formally established in 1945 in Washington, D.C. Today, headquartered in Rome, and currently present in over 130 countries, the group’s primary objectives remain:

“[T]he eradication of hunger, food insecurity and malnutrition; the elimination of poverty and the driving forward of economic and social progress for all and, the sustainable management and utilization of natural resources, including land, water, air, climate and genetic resources for the benefit of present and future generations.”

Since 1947, the organization has released The State of Food and Agriculture — an annual assessment of agricultural conditions, social trends and their economic implications. The newly-released 194-page 2016 report is all about climate change and food security — particularly what rising sea levels, more frequent heat waves and droughts mean for the world’s food supply and the people who depend on it.

In short, the FAO calls for the broad implementation of more ecologically conscious farming methods and the ​“realignment and integration” of more sustainable food and climate policies. One-fifth of greenhouse gas emissions are generated in the world’s agricultural sector, the report says, and meeting that challenge — by adopting more sustainable and efficient methods of production while meeting growing demand as the planet warms — will be an enormous undertaking. 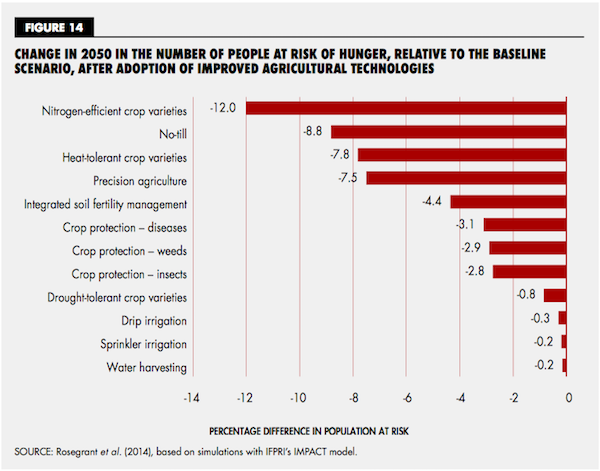 This is particularly true for the 475 million smallholder farm families in developing countries who suffer the most from global warming. Making the case that ​“hunger, poverty and climate change need to be tackled together,” the report states:

Unless action is taken now to make agriculture more sustainable, productive and resilient, climate change impacts will seriously compromise food production in countries and regions that are already highly food-insecure. These impacts will jeopardize progress towards the key Sustainable Development Goals of ending hunger and poverty by 2030; beyond 2030, their increasingly negative impacts on agriculture will be widespread.

Through its impacts on agriculture, livelihoods and infrastructure, climate change threatens all dimensions of food security. It will expose both urban and rural poor to higher and more volatile food prices. It will also affect food availability by reducing the productivity of crops, livestock and fisheries, and hinder access to food by disrupting the livelihoods of millions of rural people who depend on agriculture for their incomes. 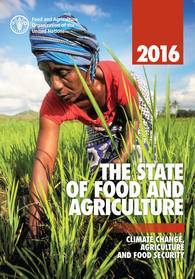 Where do seed patents, corporate landgrabbing and GMOs fit in?

Slow Food, a global (albeit grassroots) organization founded in 1989 and headquartered in Italy, is committed to ​“a world in which all people can access and enjoy food that is good for them, good for those who grow it and good for the planet.” According to its website, this involves a network of over a million activists, chefs, experts, youth, farmers, fishers and academics in more than 160 countries. In 2004, Slow Food launched the Terra Madre project to promote the small-scale and sustainable production of quality food around the world. Today, 2,400 communities are participating.

In its reaction to the FAO report, Slow Food praises the UN’s acknowledgement of the ​“direct link between agriculture and climate change, and the backing given to agroecology.” However, Slow Food also calls the FAO report’s silence on certain aspects of the current corporate food model ​“deafening.” When it comes to a fair and sustainable food supply, Slow Food criticizes the FAO’s report for failing to adequately address the ​“industrial production and consumption of meat” as well as ​“the problem of landgrabbing.” Slow Food also takes issue with the fact the report contains ​“no identifiable stance” on genetically modified foods.

According to the report, ​“farmers, fishers and pastoralists are hit hard by rising temperatures and the increasing frequency of weather-related disasters. By 2030, the negative impacts of climate change will put an increasing squeeze on food production as the essential nutritional values of crops, such as of zinc, iron and protein, will diminish.”

Furthermore, as emphasized by FAO, ​“the impacts of climate change are more strongly observed in rural communities, where there is a higher dependency on agriculture both as a source of income and for sustenance”.

Paolo Di Croce, Secretary General of Slow Food, declares: ​“The only way to reduce food-related greenhouse gas emissions is to adapt to an agroecological approach, and end support for industrialized agriculture and the globalized export markets. Slow Food voices its belief that good, clean and fair food for all is a human right, and that corporate control of the food system has led to hunger, poverty, and climate change. By acting locally, and supporting small-scale agriculture, we can make a difference globally.”

Slow Food encourages everyone, around the world, to grow their own food where possible, and to support their local farmers. Of course, in order to grow food, we need soil — and we need to face up to the crisis of soil degradation which affects farmers across the globe. We need wide-ranging and immediate initiatives to protect our soil (such as People4Soil, which demands that the European Union recognize soil as a common good), based on agroecological methods. The FAO report itself states: ​“Diversification and better integration of food production systems into complex ecological processes create synergies with the natural habitat instead of depleting natural resources. Agroecology and sustainable intensification are examples of approaches that improve yields and build resilience”. Slow Food agrees with this perspective.

Nevertheless, while the battle against climate change is clearly related to developments in the food industry — from its production and transportation to the energy required to deal with the obscene amounts of food waste we produce — one of the major sources of carbon emissions, the livestock industry, which generates between 10 and 25 per cent of all greenhouse gas emissions, is barely mentioned in the FAO report. Eating less meat and more pulses is a necessity for our future, and public support for industrialized meat production must be stopped.

Slow Food notes also the conspicuous absence of several major threats to global food security in the 194-page report. Firstly, land grabs are mentioned just once, and in the context of the European Union! Independent observatory the Land Matrix has recorded the sale of 2% of the world’s arable land to private investors since the year 2000, an area larger than the United Kingdom. Where once-pastoral lands are converted for intensive monocultural crop production, this also contributes to climate change.

Finally, given the ongoing debate on GMOs, the FAO report’s silence on the matter is deafening. Were GMOs unequivocally considered an instrument in the fight against climate change, Slow Food would expect the report to say so. Yet the report does not mention GMOs once. Beyond questions of safety, the threat to food security comes from the simple fact that GMOs are patented, and there increasing use is inextricably linked to corporate control of the food chain. Patenting genetic material has shifted the balance of economic power from farmers towards big business in their aggressive pursuit of profit, as small-scale farmers are forced to become customers of GM seeds every new season. If FAO is serious in its commitment to supporting smallholder farmers, which would seem evident in the fact that the first of the ​“Key Messages” in the report’s third chapter is: ​“Global poverty cannot be eradicated without strengthening the resilience of smallholder agriculture to climate change impacts”, then surely we must reduce the dependence of these smallholder farmers on patented GM seeds.

Support In These Times
This blog’s mission is to provide the public service of helping make the issues that rural America is grappling with part of national discourse.
Have thoughts or reactions to this or any other piece that you'd like to share? Send us a note with the Letter to the Editor form.
More articles by Rural America In These Times
ViewpointRural America
Dear Congress: Say No to Water Privatization in the Infrastructure Bill
Water costs have soared in recent years as federal funding for water infrastructure has shrunk. Privatization is the last thing we need.
Rural America
An Open Letter to Biden from Indigenous Peoples
Trump wrecked the relationship between the U.S. government and Native nations. Here's how the Biden Administration can repair this damage.
Rural America
In Less Than One Generation, We’ve Lost More Than 10 Million Acres of the Best U.S. Farmland
Similar articles
Rural America
“It Tears You Apart Mentally and Physically”: The Health Crisis Afflicting Black Farmers
Farming is a stressful occupation. Black farmers face the additional burdens of racism, debt and fear of displacement.
Safiya Charles
Rural America
The Unopen Range: How Fences Hurt Wild Animals
In the Western United States alone, 620,000 miles of fence carve up the land. These barriers threaten the migrations of pronghorn, mule deer and other species.
Tara Lohan
Rural America
“This Is Why We Don’t Drink the Water”
Fracking threatens drinking water on the Fort Berthold Indian Reservation in North Dakota. Meet the locals who are fighting back.
Elena Bruess
Join our newsletter
Fearless journalism, emailed straight to you.
Subscribe and Save 66%