The Arc of History Doesn’t Bend Toward Justice On Its Own.

It’s been 50 years since the Kerner Commission report was released, and institutional racism still pervades our society. 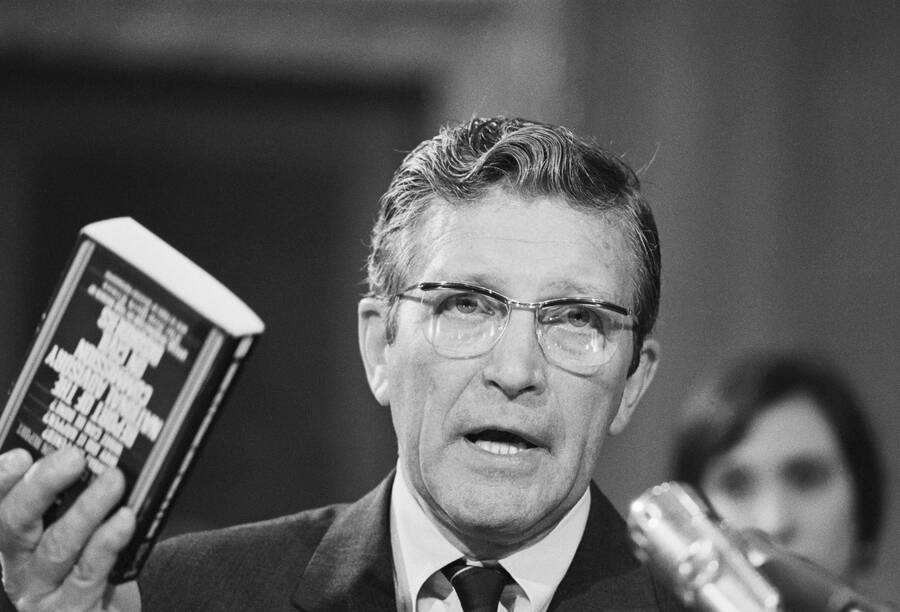 Former Illinois Governor Otto Kerner holds a copy of the 1968 Commission on Civil Disorders report as he testifies before a Senate Judiciary subcommittee. (Bettmann / Contributor / Getty)

Share Tweet Copy Link Email Print
Published in
March 2018
We take comfort in Martin Luther King Jr.’s idea that the arc of history is long, but bends toward justice. Yet does it? Is social progress an inexorable process? Can we trust that tomorrow will be better than today?
Let’s recall the “long, hot summer of 1967,” when Black people in 159 American towns and cities took to the streets to protest white supremacy. All told, more than 85 people were killed—almost all Black and almost all shot by white men in uniform.
President Lyndon Johnson, speaking with a militancy now lacking in American liberal discourse, promised to respond with “an attack—mounted at every level—upon the conditions that breed despair and violence… ignorance, discrimination, slums, poverty, disease, not enough jobs.”
“We should attack these conditions—not because we are frightened by conflict, but because we are fired by conscience,” he said on July 27, 1967, as he appointed the National Advisory Commission on Civil Disorders.
The commission—mostly white, mostly male and all aligned with the political establishment—was chaired by Illinois Gov. Otto Kerner (D), who had overseen the integration of his state’s National Guard. On Feb. 29, 1968, the Kerner Commission, as it came to be known, released its report.
Recognizing what is now referred to as “institutional racism,” the report explained:
What white Americans have never fully understood—but what the Negro can never forget—is that white society is deeply implicated in the ghetto. White institutions created it, white institutions maintain it and white society condones it.
Warning that “our nation is moving toward two societies, one black, one white—separate and unequal,” the commission called for “a commitment to national action, compassionate, massive and sustained.”
Describing police actions—and police racism—as the “basic causes” of the 1967 uprisings, the commission concluded:
Police misconduct—whether described as brutality, harassment, verbal abuse or discourtesy—cannot be tolerated. … Police departments must have rules prohibiting such misconduct and enforce them vigorously.
So, 50 years later, how far have we progressed?
Consider that most hideous expression of institutional racism: the prison system.
In 1968, 187,914 Americans were serving sentences in federal and state prisons, an imprisonment rate of 94 in 100,000. Fast-forward to the most recent year data is available, 2016: 1,458,173 people are in prison (a rate of 450 in 100,000). Of these, 27 percent are white men (a rate of 400 in 100,000) and 32 percent are Black men (a rate of 2,415 in 100,000). In other words, 2.4 percent of Black men are behind bars.
To put it another way, since 1968 the national incarceration rate has increased by 356 percent, and today a Black man in America is statistically more than six times as likely as a white man to be locked up.
Meanwhile, Trump, Sessions & Company have restarted the war on marijuana, championed private prisons and shut down Justice Department oversight of rogue police departments like the one in Chicago.
Let’s consider the possibility that things don’t get better on their own—that only human action, not the hand of providence nor the laws of the universe, bends the arc of history toward justice. Black youth, facing the intolerable racial injustice of 21st-century America, have mobilized around the conviction that Black lives—their own lives—matter. They are the arc-benders, and in 2018, they find themselves fighting the most racially reactionary administration since that of Woodrow Wilson.

Joel Blei­fuss, a for­mer direc­tor of the Peace Stud­ies Pro­gram at the Uni­ver­si­ty of Mis­souri-Colum­bia, is the edi­tor & pub­lish­er of In These Times, where he has worked since Octo­ber 1986.

Have thoughts or reactions to this or any other piece that you'd like to share? Send us a note with the Letter to the Editor form.
More articles by Joel Bleifuss
Viewpoint
Sorry Joe, Countries Don't Have Souls
Joe Biden has framed the election as a battle for “America’s soul.” But what we need are politicians who will fight for the material needs of the people.
Culture
Trump’s False Claims of Rampant Voter Fraud Draw From a Well-worn Racist Playbook
Republicans have tried to suppress turnout among voters who are poor, disabled or people of color for many years.
Viewpoint
Stop Blaming Individuals for the Spread of Covid and Start Blaming the Government Response
By presenting collective, structural crises as separate, individual problems with separate, individualized solutions, the government abdicates its responsibility to meaningfully intervene.
Similar articles
Viewpoint
The Cruel Irony of Organic Standards
Terry J. Allen
Viewpoint
From Self-Sacrifice to Hedonism
David Sirota
Viewpoint
The Tax War Goes Online
David Sirota
Subscribe to our free newsletter
Fearless journalism that speaks truth to power
Limited Time: