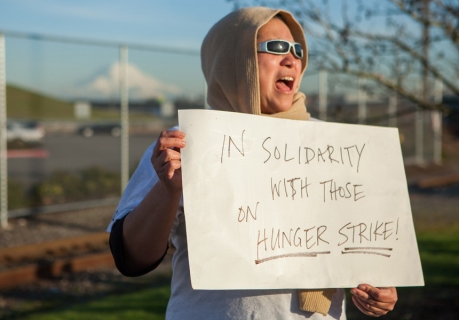 Hundreds of immigrant detainees at the Joe Corley Detention Center in Conroe, Texas launched a hunger strike early Monday morning to protest unjust treatment and demand an end to mass deportations around the country.

According to Grassroots Leadership, an Austin-based organization opposed to for-profit incarceration, the Conroe detainees are striking in solidarity with the efforts at Northwest Detention Center in Tacoma, Wash., where at least 750 immigrants began refusing food earlier this month. As of Tuesday, some detainees were still skipping some meals.

Both the Tacoma and Conroe facilities are operated by GEO Group, a private company that runs 98 detainment, incarceration and mental health facilities across the globe. In the past, GEO Group has been the target of numerous allegations that its practices have resulted in deplorable prisoner treatment and an environment of systemic violence at its facilities.

In addition to asking for a nationwide halt of deportations, the strikers at both facilities have told advocates that they’re protesting cell overcrowding, double jeopardy for old offenses, and unfair commissary prices. They’re also demanding better food and improved medical care.

As momentum builds, however, the hunger strikers are putting themselves at risk of malnourishment and alleged retaliation. In a press release, immigrant rights activist Maru Mora Villalpando claimed, “At the Northwest Detention Center, GEO Group and ICE have retaliated by putting leaders in solitary confinement and threatening to force-feed others. With the strike spreading to Texas, it’s time for ICE and GEO Group to recognize the detainees’ demands instead of engaging in retaliation.”

Private-prison companies maintain a huge financial stake in immigrant detention. In 2013, GEO Group promised not to lobby Congress on issues of immigration reform; later that year, they reneged, forking over $40,000 to lobby both the House and Senate on "alternatives to detention within ICE."

The strikes threaten to attract public attention to the detention center sector of the private-prison economy, where business is booming. In 2012, the Associated Press reported that the Federal Bureau of Prisons was paying out $5.1 billion in the form of long-term contracts of varying lengths to corporations detaining immigrants. In the ensuing years, GEO Group profit margins have continued to soar.

And the executive administration's immigration policy has only increased the demand for detention centers. There were almost 100,000 immigration prosecutions in fiscal year 2013, a staggering 150 percent increase from 2007 levels. More than 30,000 immigrants are currently detained every day in the United States, and the federal budget actually contains a policy that ICE funds be used to, as the Washington Post reported last year, "keep an average of 34,000 detainees per day in its custody."

Though the White House budget proposal for fiscal year 2015, unveiled earlier this month, removes the mandate, it still includes $1.3 billion to support more than 30,000 detention beds—signaling that the administration has no plans to change course anytime soon.