Feeling the Bern or Ready for Hillary? Where The Democrats Stand on Criminal Justice 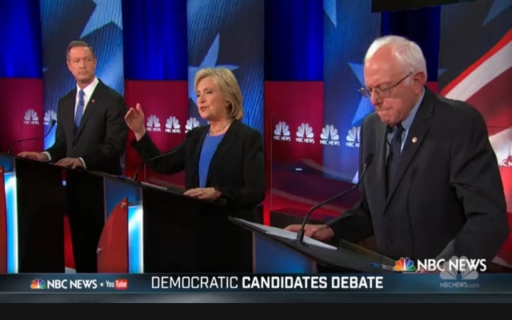 Hillary Clinton, Bernie Sanders, and Martin O'Malley have debated for the final time before the Iowa Caucus. Where do they stand on criminal justice issues?   Screenshot NBC

Are you Feeling the Bern or Ready for Hillary? Here’s where the three Democratic presidential candidates stand on criminal justice issues.

During this campaign Clinton has talked repeatedly about the need to end “mass incarceration,” and she continued that theme at the debate.

"One out of three African American men may well end up going to prison. That's the statistic," Clinton told the audience "I want people here to think what we would be doing if it was one out of three white men.”

Clinton’s positions on criminal justice issues have shifted over the years. As The Marshall Project puts it, Clinton has gone from “young, idealistic lawyer who represented people convicted of rape and murder and opposed the death penalty” to “wife (and a vocal supporter) of Bill Clinton, the tough-on-crime, pro-death penalty governor of Arkansas” to the First Lady who “vouched for a crime bill that significantly contributed to mass incarceration.”

Along with both Bernie Sanders and Martin O’Malley, Clinton’s campaign has promised to eliminate the sentencing disparity between powder and crack cocaine which research has suggested results in significantly harsher penalties for poor people and people of color. At the debate, Clinton said “we have to move away from treating the use of drugs as a crime and instead, move it to where it belongs, as a health issue.”

But there are differences between Clinton’s criminal justice plans and those of her opponents. For instance, both Sanders and O’Malley oppose capital punishment, while Clinton has said she is not in favor of abolishing the death penalty.

Clinton also faced criticism from activists earlier in the campaign for her links to private prison companies. Her campaign later announced that they would no longer accept donations from federally registered lobbyists or PACs for companies involved in incarceration and that money she has already received will be donated to charity. (Both her Democratic opponents have pledged to end for-profit incarceration if elected)

After facing criticisms from some in the Black Lives Matter movement Bernie Sanders released a wide-ranging set of campaign positions, including several policy pledges specifically on criminal justice and policing.

At the debate, Sanders noted that as Mayor of Burlington he had worked “very closely and well with police officers, the vast majority of whom are honest, hard- working people trying to do a difficult job” but “if a police officer breaks the law, like any public official, that officer must be held accountable.”

Sanders went on to say that police departments should be “de-militarized” and that they should “look like the communities they serve in their diversity.” (How you actually achieve that is complicated) He also argued “whenever anybody in this country is killed while in police custody, it should automatically trigger a U.S. attorney general's investigation.”

As a member of Congress, Sanders voted against the death penalty at almost every opportunity, and has supported efforts to decriminalize marijuana. (He recently called for the drug to be removed from the government's list of banned substances, a step further than his two opponents who only want it recategorized) He initially opposed an early version of what became “The Violent Crime Control and Law Enforcement Act (1994)” which he said was not “a crime prevention bill” but “a punishment bill.” He voted in favor of the final bill introduced by Senator Joe Biden and signed into law by President Bill Clinton, because, he said, it included the Violence Against Women Act.

Martin O’Malley has also made criminal justice reform a central part of his campaign.

Among dozens of policy proposals O'Malley supports are plans to “Ban the Box” and restore voting rights to people with felony records. As president, O’Malley says he would “strongly support legislation that would end the drug felon ban on access to SNAP and TANF assistance.” At the January debate he was asked about his record in Maryland:

(While this is broadly-speaking correct, the data suggests that incarceration rates and violent crime had actually been in decline before he took office as Governor.)

O’Malley has been criticized for supporting positions on the campaign trail he opposed in office. “What happened to the zero-tolerance Baltimore mayor who became the no-parole-for-lifers governor of Maryland?” asks Dan Rodricks at the Baltimore Sun “Where's the guy who was once bullish on mandatory minimums?”

As Governor, O’Malley vetoed a bill which would have rolled-back mandatory minimum sentences for second-time convicted drug dealers, and told a radio show “drug dealing is a violent crime.”

O’Malley’s platform states that law enforcement “must treat all communities fairly and earn their trust” and proposes a range of measures to encourage “ independent investigations of policing cases” and “strengthen federal civil rights protections.” During the debate he also drew heavily on his record as Mayor and Governor:

.. we were able to save a lot of lives doing things that actually worked to improve police and community relations. The truth of the matter is, we created a civilian review board. And many of these things are in the new agenda for criminal justice reform that I've put forward.

We created a civilian review board, gave them their own detectives. We required the reporting of discourtesy, use of excessive force, lethal force. I repealed the possession of marijuana as a crime in our state.

But O'Malley's legacy has been questioned. One in three Maryland residents in state prison are from Baltimore and the death of Freddie Gray in police custody, as well as the riots that followed prompted criticism of O'Malley's time in office. Matthew Crenson, a political sceience professor at Johns Hopkins University, told ThinkProgress, O’Malley’s “tough-on-crime” approach might share some responsibility for the unrest.

“One of the possible costs is that this creates a great deal of tension in relationships between the police and communities in their policing, because it means they’re always hassling people for minor offenses,” he said. “And that could conceivably create the atmosphere in which it’s very easy for a riot to break out when something like Freddie Gray’s death occurs..” Continue reading...