Where Might Remaining Guantanamo Detainees Be Sent If The Camp Closes? 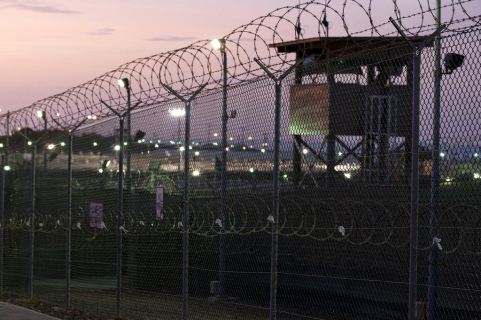 If the sun finally sets on Guantanamo, where might the remaining detainees be sent?   Joint Task Force Guantanamo, Flikr

Questions about the legality of detaining foreign nationals without trial, as well as accusations of torture at the site have dogged the detention facility since the first prisoners arrived in 2002. There are now less than 100 detainees remaining at Guantanamo. This February the Department of Defense sent Congress a new plan to close the camp. Under the plan, detainees cleared for transfer to other countries will continue to be moved out of Guantanamo and the remaining detainees will be transferred to the US. The small number that have been convicted under the controversial military tribunal system would serve their sentences here, others would be charged and tried in either military or civilian courts. The remainder would continue to be held without charge under law-of-war detention.

But there's a major obstacle to this plan: Congress.

Congress has repeatedly passed legislation that prevents the use of federal funds to transfer detainees to the US. National and local politicians opposed to the transfers say that bringing detainees suspected of terrorism to the US will put Americans at risk. Advocates for closing Guantanamo point out that there are already 349 people convicted of terrorism serving sentences in the US.

If, and that’s a big “if,” detainees were ever brought to the US, where would they be held? The new plan does not name specific facilities, but in the past a number of existing prisons have been suggested, and a team from the Pentagon recently visited several other sites. Here are the prisons that are reportedly being assessed, or have previously been considered for detainees.

Listed in a Government Accountability Office (GAO) report as a possible facility to hold Guantanamo detainees, the Midwest Joint Regional Correctional Facility is one of three federal prisons at Leavenworth. Robert Bales, the US Army soldier found guilty of killing 16 Afghan civilians in what became known as the Kandahar Massacre, was held here and also at the North East Joint Regional Correctional Facility (NEJRCF) in Washington before his trial. The NEJRCF was also listed in the GAO report.

The US Disciplinary Barracks first opened in 1874 and was rebuilt in 2002. It's the military’s only maximum security facility for court martialed male officers and is also the site of the military death row. It has frequently been proposed as a possible location for Guantanamo detainees, but faces local political opposition. Kansas Governor Sam Brownback, together with the Governor of South Carolina, Nikki Haley, wrote to the Defense Secretary Ash Carter, opposing any transfer of detainees to his state. Their letter called those in Guantanamo “among the most deadly terrorists in history” and concluded “please know we will take any action within our power to make sure no Guantanamo Bay detainees are transferred to South Carolina and Kansas.”

The Naval Brig at Charleston has already been used to hold terrorist suspects. Jose Padilla, a US citizen designated an “enemy combatant” was held for three and a half years without trial here before being tried in a federal court and convicted of conspiracy. He is currently serving his sentence at ADX Florence, the only super-maximum security prison run by the Bureau of Prisons, which holds several prisoners convicted of terrorism. The GAO report also pointed to the Naval Consolidated Brigs in Chesapeake and Miramar as possible locations for Guantanamo detainees.

Along with Centennial Correctional Facility, FCI Florence is one of the Colorado prisons the Pentagon team assessing alternatives to Guantanamo planned to visit. FCI Florence is nextdoor to ADX Florence. Both FCI Florence and Centennial Correctional Facility are in Representative Doug Lamborn’s (R) district. Representative Lamborn voiced his opposition to the Pentagon even considering the two prisons saying “The people of Colorado do not want the world’s worst terrorists housed in our own backyard and we will not stand for this” he went on to say he would do “everything in my power to resist these unlawful terrorist transfers from taking place.” Governor John Hickenlooper (D) sounded a more conciliatory note, his spokesperson said “The governor, like the Pentagon, wants to have a full understanding of the costs, risk and impacts for Colorado.”

Colorado’s Department of Corrections opened Centennial Correctional Facility in 2010 and closed it just two years later, due to a lack of prisoners. Designed with 948 isolation cells, the prison was intended to hold prisoners in solitary confinement but the state’s reduction in use of solitary meant that the $208 million prison was used only briefly and now sits empty.

The federal government purchased the “state-of-the-art, maximum-security prison” from the State of Illinois in 2012 for $165 million. It had been touted as a possible site for detainees, but by the time the government took ownership of the prison, Congress had already blocked the use of federal funds to transfer Guantanamo prisoners to the US.

Even if Congress agreed to allow the transfer of detainees to one or more of these facilities some advocates, such as the ACLU, have raised concerns that serious issues with the detention and treatment of terrorism suspects would remain.

Importing indefinite detention and unfair military commissions would just create “Guantánamo North” on American soil, entrenching the prison’s blight on our nation’s core values and the rule of law. And it will perpetuate, and possibly worsen, the agony of men denied an end to their plight. Continue reading...

With the Republican leadership in Congress publicly opposed to any transfer of detainees a deal to move them to the US seems unlikely.