Indian Country: The Situation is Bleak, But Not Hopeless 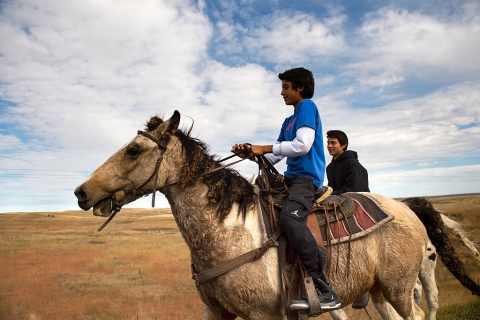 On Oct. 22, 2014, Adam Lays Hard, 14, and Sam Bull Bear, 18, who are members of the Oglala Lakota, a subtribe of the Great Souix Nation, ride across the Pine Ridge Indian Reservation in South Dakota. Pine Ridge is the poorest community in the United States.   Photo by Nikki Kahn/The Washington Post via Getty Images

Back in 2001, about 100 miles west of Kabul, in the Bamiyan Valley, the Taliban rigged two towering sandstone statues of Gautama Buddha with enough dynamite to wipe them clean from the cliff they were carved into during the sixth century. Despite an international outcry, the Taliban detonated the 1,700-year old statues. They were met with condemnation, outrage and headlines the world over.

In early 2015, videos started circulating showing Islamic State of Iraq and the Levant (ISIL) fighters taking jackhammers, drills and sledgehammers to ancient artifacts in the Mosul museum. Then ISIL took a bulldozer to the Mashki and Adad Gates of Nineveh, and all but toppled the 2nd-century city of Palmyra.

In the summer of 2016, members of the Battle Mountain Band of the Te-Moak Tribe of Western Shoshone Tribe mounted legal action against mining operations that endangered large portions of the Tosawihi Quarries—a 15,000-year-old tribal sacred tribal site in Nevada that includes ancient-stone gathering places and an ancestral healer’s trail that qualified for the National Register of Historic Places. The mining company didn’t wait for a final ruling to begin operations and irreparably damaged the Tosawihi Quarries.

Can we derive any common denominators from the events in the Bamiyan Valley, Mosul, Nineveh, Palmyra and the Tosawihi Quarries?

In her new book, American Apartheid: The Native Struggle for Self-Determination and Inclusion, Stephanie Woodard writes, “Demolition of irreplaceable ancient artifacts usually merits outrage, or at least notice." When it comes to how the media covers Native issues, we’ve been doing it all wrong.

Before the Trump administration’s directives involving Standing Rock, Bears Ears, and Grand Staircase Escalante propelled Native affairs into national headlines, Woodard, who writes regularly for In These Times, spent  20 years reporting onNative issues—historically a blind spot for mainstream media outlets. In American Apartheid, Woodard argues that Indian country faces a crisis that extends beyond the events at Standing Rock, one that has not become part of the national conversation.

Despite the public interest in the fight against the Dakota Access Pipeline, Woodard writes that it remains “just one of many oil, gas, and electrical transmission lines, roads, railroads and other infrastructure projects that cross Native lands nationwide.” The exploitation of Native people isn’t a thing of the past; it’s hardwired into our democracy and institutionalized at every level of government.

Patrick Wolfe, the late historian of colonialism, wrote that colonization is a “structure rather than an event.”  Woodard’s thesis is similarly grounded.  She maps the federal policies, broken treaties and public attitudes that exacerbate “economic distress and keep tribal people separate, unequal and exposed to predatory interests.”

The most compelling and unnerving finds emerge when Woodard brings into sharp focus the casualties of the cozy relationship between private interests and government agencies. She writes about a Navajo family’s fight for appropriate compensation in return for renewing the right-of-way grant of an oil pipeline that transports about 15,000 barrels of crude oil a day across their 160-acre plot of land. When all was said and done, Woodard writes, the family faced accepting a sum of “$6,656 for 20 additional years of access to their land, or about $333 per year.” She continues, “The amount was to be split among nearly 50 people, for an average of a little more than six dollars per each year.”

It turns out that the Bureau of Indian Affairs authorizes lease applicants, some but not all of which are oil companies, to set the price for the Native property they want. She writes, “This is business as usual in Indian country.

Overturning decades-old laws that discriminate against Native people is made more difficult when they are routinely shut out of the voting process. In an unlucky combination, “distance and poverty prevent tribal members from getting to white-majority towns and their courthouse polling places.” For instance, Woodard writes, “In San Juan County, Navajo Nation residents who needed to or wanted to vote in person had to travel as many as 400 miles to do so.” A round-trip distance like this would require a working car and gas money, resources that not everybody on reservations has access to.

Voting by mail, the next best alternative for reservation voters, manages to be similarly complicated. Getting a mail-ballot can also require steps that are daunting on isolated, impoverished reservations,” she writes. “The prospective voter generally has to download instructions and a ballot application, photocopy the document along with identification, and get it all notarized before putting this packet in the mail.” Keep in mind, a computer, internet access, a photocopier and a printer are unlikely to be available at the same place and the same time on any reservation. An attorney from a voting-rights group, who already had the advantage of a laptop, tested the mail-in process and had to travel across state lines to find a photocopier and a printer.

The police powers of the state are also arrayed against Native people. A 2016 study by Jean Schroedel and Roger Chin of Claremont Graduate University found that in “Mississippi, South Dakota, Idaho, Washington, Alaska and North Dakota, the death rates for Native Americans caused by the police ranged from 1.19 down to .27 per 10,000. All six were higher than the highest rate for African Americans—in California, at .19 deaths per 10,000.”

Life on the reservation is clearly viciously difficult. For Native youth living at the intersection of so much generational pain, the consequences are heartbreaking. Woodard writes, “The suicide rate for of Natives aged 15 to 24 was not only the highest in the nation, it had climbed steadily over the 15 years between 1999 and 2014.” The latest figures from the Suicide Prevention Resource Center report that in 2016 the suicide rate among American Indians/Alaskan Natives was 21.39 per 100,000, compared to the national average of 13.5 per 100,000 in the same year.

American Apartheid suggests that if nobody knows, nobody can care. Woodard is also deeply aware that those who do know about the oppression of Native people are actively benefiting from it. Better media coverage may not stop this human rights crisis—but documenting the structural racism that Native people experience is the first step. It makes us confront the predatory political and economic apparatus that benefits from the oppression of the first Americans and the exploitation of the natural resources still under their control.

Woodard’s lasting message, however, is that while the challenges are many, Native cultural resilience ensures that the tribes will survive. “The situation in Indian country is not, and has never been hopeless. During visits to Native communities around the country, I have seen that culture is a shield that has persisted, indeed thrived, despite all efforts to stamp, starve and regulate it out of existence,” she writes. “The ongoing hum of tradition underlies the cacophony of problems that tribal members are constantly fighting to resolve.”

Juanpablo Ramirez-Franco is an editorial intern for In These Times and Documenter at City Bureau.